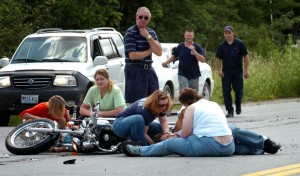 Russ Brown Motorcycle Attorneys®: Cooperate with authorities, but do not admit fault after a motorcycle accident.

In August 2008, Betty Jordan collided with a trucker-trailer driver that was hauling auto parts on I-70 in downtown Indianapolis. The truck driver was driving his truck in the center lane through a right-hand curve and Jordan was riding in the right hand lane. She collided with the truck, was thrown to the pavement, and lost both of her legs in that motorcycle crash. Immediately after the crash, Jordan was heard saying between screams that it was “her fault”. Indiana State Trooper Russell Litt testified that Betty Jordan repeatedly took responsibility for the crash.
Later, the Jordans sued the truck driver and his employer for negligence and loss of consortium, but a 2011 jury found in favor of the defendants. The Jordans appealed this ruling and argued that six pieces of evidence were inadmissible hearsay under the Federal Rules of Civil Procedure. Specifically, they believe that the crash report that said Betty Jordan repeatedly admitted fault in-between screams of agony was hearsay and not evidence.
This month, the 7th Circuit could not overturn the verdict and the three-judge panel found that Betty’s statement qualified as an admission by a party-opponent. This admission, even in her pain-induced trauma was enough to prevent the Jordans from winning their case and ultimately the compensation they needed to pay medical expenses after her life-altering motorcycle accident.

Betty Jordan’s unfortunate motorcycle accident serves as a cautionary tale for riders everywhere. Never admit fault after a motorcycle accident – you should cooperate with the investigating authorities, but do not admit fault. Even a simple “I’m Sorry” can be twisted and used against you in court.
Be careful motorcyclists: what you say, can be used against you. This is news we all need to heed and unfortunately, it can mean the difference between winning your case in court and losing it.
At Russ Brown Motorcycle Lawyers, we understand the complications that arise after a motorcycle accident. That’s why we want you to be prepared before you ride! Call us today to speak with one of our experienced motorcycle accident attorneys and sign up with BAM, our free roadside and legal assistance program.

If you are ever involved in a motorcycle accident anywhere in the United States, you will know that you are backed by the nation’s most experienced motorcycle accident lawyers. Call the Russ Brown Motorcycle Attorneys® at 1-800-4-BIKERS today. We Ride-We Care-We Win!