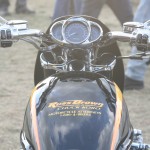 Russ Brown Motorcycle Attorneys®: Just about every biker has a motorcycle trailer of some kind, well I guess that even hauling your Harley around in the back of a pick up truck counts too. But when it comes to transporting a show bike to and from motorcycle events, cutting corners can be down right costly.
A perfect example is this years Daytona Bike week. I didn’t ride my bike to the show this year, but while making the event with one of my friends who was bringing his fully restored 1965 Pan Police special that used to belong to the Detroit police department I noticed he took extra care in not only tying down his bike with quality load rated tie down straps, but he also used multiple layers of protection covering.
While I understood the need for using quality tie down straps, the reason he also used multiple covers didn’t become apparent until I watched a gravel truck spray another bikers uncovered Harley with high speed gravel splatter on I 10 just outside Houston, Texas.
Believe it or not we made it to Daytona, Florida without a single scratch, dent or ding to his sexy Panheads chrome and paint, and short of using a fully enclosed trailer the covering he applied to his Harley was all he needed to ensure his bike wouldn’t be damaged by flying road debris.
What my bro used was a large 3-foot wide roll of bubble rap he purchased at a local box store, which he rapped around the bike after he had securely tied it down. Putting the majority of the rap around the front of the motorcycle, and tank and headlamp. He then used 2 sturdy thick stitched covers he had purchased. The end result was a well-protected covering that prevents damage to the motorcycle while we made our way to Daytona.
Another point that should be made is if you do intend to use an open trailer for your motorcycle, it should at least have a fully covered floor and enclosed front. Road debris can easily bounce up and cause damage to the your motorcycles frame, motor and trans, as well as break one or more of your tie downs creating the potential for serious damage as well as a vehicle accident.
If you can’t afford an enclosed motorcycle trailer, then the next best thing is protecting your motorcycle with quality tie down straps and multiple coverings.
Russ Brown Motorcycle Attorneys®
We Ride We Win We Care