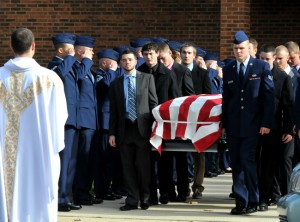 Tragic news out of Maryland, as a former high school soccer star, and member of the US Air Force was killed while enjoying a ride on his motorcycle.  Ryan Hartnett, 20, was a senior airman with his squad at the Dover Air Force Base.
Hartnett was killed November 12th when his motorcycle collided with a car making a U-turn on Telegraph Road.  The car was pulling into Hartnett’s line of travel. The tragedy has affected all who new Hartnett, and his entire wing at the Air Force.  “Our wing is deeply saddened by the tragic loss of one of our airmen” Col. Raymond A. Kozak, the 512th Airlift Wing commander, said, “My sincerest condolences go out to Airman Hartnett’s family, friends and co-workers.”
Hartnett was buried in the presence of family, friends and members of his wing at the Air Force who bestowed upon him military honors as he was lowered into the ground.  At the service, those who knew him remembered him for his character, love of life, and love of soccer and his motorcycle.  “He was an outstanding soccer player and captain who always stood up for his teammates,” said Corey Josiah Thomas, who played with Hartnett for several years. “He was very outspoken and didn’t care what others thought. I’ve grown up playing soccer with him, and he has truly blessed so many lives. … The thing I remember most is that he was always willing to help others and had our backs, no matter what. He is the perfect example of the quote, ‘Live fast, die young’” said Hartnett’s close friend Corey Thomas.
Police are still investigating the accident, and no charges have been pressed at this point.
The people of Cecil County, Hartnett’s home County, have been holding nightly candlelight vigils for Ryan Hartnett, and will continue to do so throughout the week.  He will be missed by friends, family, colleagues and motorcyclists alike.
Our thoughts and prayers are with Hartnett’s friends and family.