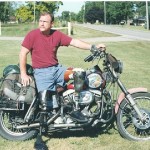 Dave Barr: An American Motorcycle Hero
In 1981, a landmine explosion in Angola left Dave Barr with life threatening injuries that resulted in the amputation of both of his legs. Yet Dave Barr refused to let this injury and disability prevent him from living life to the fullest. After a lengthy rehabilitation period, he completed his active duty military enlistment and returned to the States. He then set out to do the impossible—ride around the world on his motorcycle.
Before beginning on his epic adventure, Barr had to learn to ride again and his bike had to be outfitted to accommodate for his prosthetic legs. In 1990 he left Johannesburg on his Harley Davidson and began riding. He circled the globe, logged 83,000 miles, and rode 3 ½ years through some of the world’s most dangerous terrain to complete his unbelievable and inspiring journey. In his 500 page book, Riding the Edge, there are pictures of him riding through the sands of the Sahara Desert, parked in the Arctic Circle, crossing a primitive bridge in across a Brazilian River, and stranded 12,000 feet in the Chilean Andes.
A few years later, in 1996, Barr set a Guinness World Record for the fastest motorcycle ride across Eurasia in the dead of the Siberian winter. He again set a record in 2002 with his 10,000 mile Southern Cross ride through the four farthest points of Australia in just 8 weeks. There were moments of extreme danger, impassable terrains, and unforgiving weather, yet Dave Barr persevered.
Like all legends, Dave Barr’s accomplishments were recognized by motorcyclists everywhere and he continues to serve as an inspiration to other disabled riders. He was inducted into the Motorcycle Hall of Fame Museum in 2000 and is now a motivational speaker. Barr once told a reporter: “If you’re not willing to take risks, then you’re going nowhere”. Luckily for us, he did—and we are a nation inspired by his will and his desire to achieve the impossible.