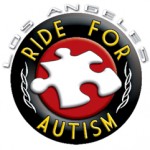 Dean McDermott, actor and star of “Tori and Dean: Home Sweet Hollywood,” returns as Grand Marshall for the Fourth Annual Los Angeles Ride For Autism taking place Saturday August 6, 2011
The Centers for Disease Control and Prevention has called autism a national public health crisis whose cause and cure remain unknown.
Autism affects tens of millions people worldwide.  It is estimated that in the US alone over 1.5 million people have Autism and the number is increasing every year.  Boys, for reasons unknown, are more affected then girls, at an estimated rate of 1 out of every 70.
What is Autism? Autism is a general term used to describe a group of complex developmental brain disorders known  as Pervasive Developmental Disorders (PDD)
How common is Autism? It is estimated that one in every 110 children is diagnosed with autism, making it more common than childhood cancer, juvenile diabetes and pediatric AIDS combined.
The Los Angeles Ride For Autism began with  the passion of three people affected by Autism, Anthony de la Rosa, Pat de la Rosa and Doug Marrone.Pat and Anthony de la Rosa are parents of Brissa, a 12 year old girl with Autism and  Doug Marrone is an avid motorcyclist and passionate about this cause. Their passion and efforts have raised hundreds of thousands of dollars on behalf of Autism in the Los Angeles area since it’s inception in 2005.
This incredible ride brings together motorcycle enthusiasts from all walks of life to cruise the streets of Los Angeles and Orange Counties to raise awareness and resources for families affected by Autism.  Registration for The Los Angeles Ride For Autism begins at 8 AM on Saturday August 6 2011.  Motorcyclists can choose from starting at one of two locations.  Laidlaw’s Harley-Davidson in Baldwin Park for the Los Angeles and Orange County motorcycle riders and at  Bigg’s Harley-Davidson in San Marcos for the San Diego motorcycle riders.
The motorcycle ride will finish around 4 PM at The Gaslamp in Long Beach, where the ride ends and the party begins.
The 2011 RIDE FOR AUTISM beneficiaries include Autism Speaks, Autism Society of America – Long Beach / San Gabriel Valley, Autism Tree Project Foundation, and Talk About Curing Autism (TACA).
For additional information, including sponsorship opportunities, registration information and volunteering, visit www.rideforautism.org.
CONTACT:
Doug Marrone
310-926-3350 / doug@rideforautism.org
If your going to ride, why not ride for a cause.