Man Saves Motorcycle With Brothers Ashes In It From Fire 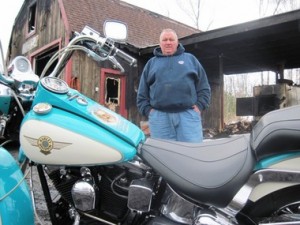 When a fire ignited the free standing wooden garage behind his home, Billy Fountain sprung into action.  He knew he only had mere moments to save a 1992 Harley-Davidson Fat Boy that once belonged to his brother and now housed his ashes.  He ran into the garage and wheeled the gorgeous bike out, having to pass his beloved 1979 Ford pickup, which didn’t survive the catastrophic event.  “Hell or high water, I was getting that bike out of there” stated Fountain, as he shed tears.
The bike holds the ashes of Harold Fountain II, a Vietnam War veteran who lost his leg overseas and was then killed in a motorcycle accident in Florida.  The baby blue and chrome Fat Boy had a painted picture of Harold on it, with his nickname, “Jugsy” written underneath.  Billy said the bike was a symbol of the lifestyle that Harold lived.  “He was a bartender and a hell raiser” said Billy of his older brother, going on to say that the burning of his garage didn’t matter to him as long as he had a place to sleep, and that he simply had to “get that bike” while wiping tears from his cheek.
Fountain is counting his lucky stars though, as things could have been much worse.  Within the barn were about 50 gallons of diesel fuel that luckily didn’t explode, otherwise the bike, Fountain and his home would have been destroyed in the process.  Fountain praised the efforts of the firefighters who came from 4 districts who came to aide in the dousing of the fire.  Without them, Billy, and the memory of his brother, Harold, would have all been lost in the blaze.
The cause of the fire is still unknown, and is under investigation by local authorities.  But Fountain couldn’t care less saying he has insurance to cover the losses and the rebuilding process.  He is just happy he was able to keep his brother’s memory alive.