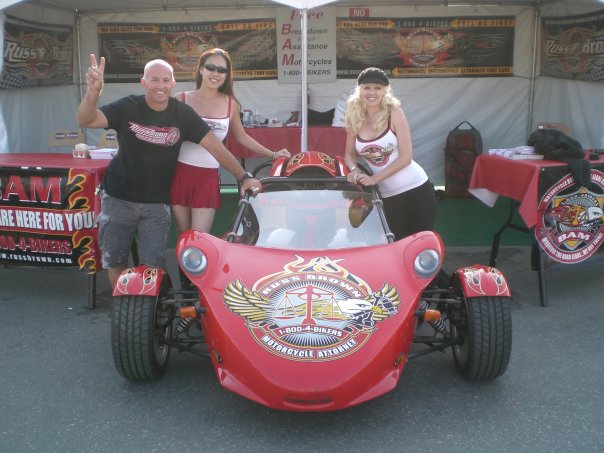 Summer has kicked into gear in the northern states in our great country so we are now in full motorcycle mode nationwide. An interesting sign of the beginning of motorcycle season in Minnesota is the increase of deer fatalities most of which are caused by motorcycles. The news coming down the wire from Minneapolis Minnesota is a fellow motorcyclist was killed when broadsided a deer. He was on Hwy 13 in Savage, MN just north of Connelly, Minn He was wearing a helmet but died at the scene. June is the unofficial start of motorcycle season in Minnesota and also one of the worst months for deer collisions.  In 2008 deer – motorcycle accidents claimed 7 lives. If you go up against a deer on your motorcycle and need advice call a Minnesota Motorcycle Accident Lawyer.

I am in Los Angeles, CA and have a Google news alert in my gmail account that lets me know every time a motorcycle accident hits the news wire. That’s how I know summer is in full swing, the constant alerts from Google. Being in the south we have a constant hum of news but now its going berserk with news from our motorcycle states to the north.

This weekend in Pennsylvania, two motorcycle riders were killed in an accident with a car. It is reported that the bikers were on their motorcycles heading south and crossed the center line and collided with a northbound car.

June is Motorcycle Safety Awareness month in New York State. 2008 had close to 5,400 motorcycle accidents. Motorcycle fatalities increased by close to nine percent from 2007 to 2008 but have decreased from 2008 to 2009. And according to statistics the second most common factor in these accidents was failure to yield. So the ‘powers that be” in New York State are promoting awareness to motorists to watch out for motorcycles and for bikers to be properly trained before taking to the road.

The DMV in New York State began offering the road test waiver benefit in 1996 (you take a certified training course you don’t have to take the road test with the DMV). Since then more than 100 000 bikers have taken the Basic Rider Course in NY State. In 2008 one quarter of the licenses issued were earned through this course. Only 1/4. That means the other 3/4 have not taken basic rider training. How sad.

To encourage more motorcyclists to take the driving course the DMV has created a DVD entitled “Learning Is For Life”. It is for various motorcycle groups to interact with motorcyclists on a regular basis and promote rider education. For more information on this DVD visit New York State’s DMV site at https://www.nysdmv.com or the Governor’s Traffic Safety Committee website at https://www.safeNY.com

In other news on awareness and safety in Alabama, Governor Bob Riley authorized a grant of $114,238 to expand the existing Motorcycle Safety Program under the Alabama Traffic Safety Center which is operated by the University of Montevallo. The programs goal is to provide quality training for all levels of bikers.

It is important to safety that bikers be visible to all other vehicles and to be aware of what hazards are around them. I think it is fantastic for the Governor to do this. But still would like to see a huge increase of motorcycle awareness taught in driver training for ALL drivers. Many many accidents are caused by Cagers not seeing us so it’s not just motorcyclists that need to be aware. Show those kids in Drivers Education what a couple of motorcycle accidents look like and maybe they will be more aware.

BAM, Free Breakdown and Legal Assistance for Motorcycles, will be in the San Francisco area this weekend so if you are in the Bay area come see us at Alice’s Restaurant in Woodside, CA. Alice’s is the go-to location to all those bikers who live in San Francisco, Oakland, San Jose, San Ramon and the surrounding Bay Area. Hope to see you there.

And remember if you have been in a motorcycle accident and need a top motorcycle injury lawyer call the attorneys who ride, Russ Brown Motorcycle Attorneys®, 1-800-424-5377. Russ Brown, Chuck Koro and Jim Romag. They should be the first phone call you make.