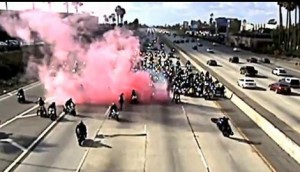 It was a heartwarming scene on the Los Angeles 10 Freeway when a group of approximately 200-300 motorcycle riders held up traffic for a marriage proposal. The riding group was making the trek along the freeway for a Unity Ride. The ride is an opportunity for bikers from some local clubs and those who ride solo to ride together in an expression of freedom and unity.
The proposal that took place on the 10 Freeway was the idea of the soon to be groom Hector Martinez who lead his girlfriend, Paige Hernandez, to believe it was just an ordinary ride. In a stunt that Hector had been planning since last October, he applied a special resin to his tires which allowed for pink smoke to emanate when he put his bike into a major burnout.
When he was later contacted, Martinez revealed that only a handful of the riders in the brigade knew about the idea. That the rest would stop for him to propose to his soon to be new wife in the middle of the freeway was more than he could ask for from his friends within the biker community. The entire process took approximately 4 minutes to complete, and, though it held up a large number of cars on the already busy Los Angeles freeway, Martinez said that no drivers cussed or made lewd gestures towards him, in fact some even clapped as they went by.
Although it is technically against the law to interrupt traffic, there has been no action on the part of the CHP to lay any charges. In fact, the act has taken on a bit of a life of its own in the Twitterverse with many people tweeting their support. Though the CHP is now looking into the incident.
By the way Paige said yes.
Ride On!
Russ Brown Motorcycle Attorneys®