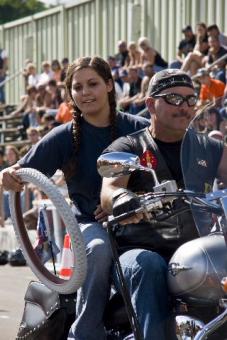 New York Motorcycle Accident Injury Attorney; 2 Harley Davidsons to be Raffled Off at this year’s Rally in the Valley.
Bet that caught your attention! Yep, that’s right—in honor of the 10th Annual Rally in the Valley, the Greater Olean, New York Area Chamber of Commerce has decided to raffle off not one but 2 Harley Davidsons. First prize will get you the 2012 Big Red Sportster Seventy-Two and second prize will get you the 2012 Red Sunglo Sportster SuperLow. There will also be a host of other prizes raffled off that weekend, but the Harley Davidsons definitely take top billing! Tickets for the raffle prizes are just $20.
This year will mark the 10th anniversary of the Rally in the Valley in Olean, New York and it will be held August 22-26th. In February of 2003, Dennis Jones suggested that Olean have a motorcycle event in the city where bikers, bike owners, and the community could celebrate the wonders of motorcycling. Since then the rally has grown and now it is one of the best rallies in the state! The rally’s proceeds go to benefit a host of community charities that in the past have included groups such as the South Olean Football, the Dempsey Club, the Olean Mercy Flight, and Southern Tier Child Advocacy Center.
The three day event usually kicks off on Fridays with a free concert, games, and vendors. On Saturday, the motorcycle rally becomes an all-out street festival with bike contests, bands, foods and more. Bike contests include favorites like the slow ride, ball drop, tire toss, and the hot dog! On Sunday, the rally includes a 130 mile Dice Run that ends in Olean with fun music, prizes, and amazing food.
This year the Russ Brown Motorcycle Attorneys® are proud to be a part of the Rally in the Valley in Olean, New York. Our motorcycle accident attorneys will be there to take in all the fun and introduce more bikers to BAM, our free roadside and legal assistance program. We understand the issues facing motorcyclists every day because we ARE motorcyclists. Call us today at 1-800-4-BIKERS to learn more about our firm or BAM. We Ride—We Care—We Win!
From Los Angeles, California to Buffalo New York, from Miami, Florida to Philadelphia, Pennsylvania, from Cleveland, Ohio to Phoenix, Arizona – we have a top motorcycle accident attorney who will fight for you.