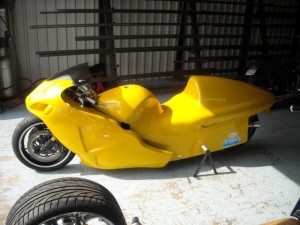 Imagine being able to hit speeds in excess of 400 mph in a quarter mile on a rocket motorcycle. Well, that’s exactly what the “rocket bike” designed and built by Glenn Brittian can do. The bike isn’t built for handling or any other purpose other than speed.
Put up for auction on the popular website EBay for an original asking price of $27,000, the bike was purchased by Gerd Habermann Racing, a German drag racing team, for an undisclosed amount. As stated before, the bike was built for one purpose…that being speed. Engineered with a dual nozzle engine that produces an amazing 3500 pounds of torque! The engine itself runs on Hydrogen Peroxide, which then runs through a chamber which produces a reaction changing the Hydrogen Peroxide into water and oxygen. The water is then super-heated to temperatures upwards of 1100 degrees Fahrenheit, and is released as steam, meaning that his bike has a minimal carbon footprint.
The builder of this rocket motorcycle, Glenn Brittian, has been building rocket powered machines using Hydrogen Peroxide since 1981. Licensed by the NHRA since 1983 and operating under the banner of Glenn Brittian’s Rocket Crusade, he has produced some fantastic machines including a rocket kart, rocket dragster and even a dual seated rocket dragster. Brittian’s 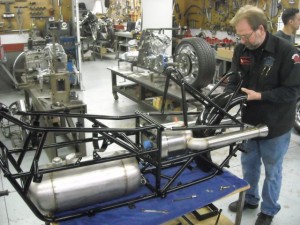 main end game is to hold a “600 mph race” wherein he pits two of his rocket powered creations against one another, both running identical fuel pressures and concentrations, in a best two out of three series. Given the size of Brittian’s operation though, it requires sponsors.  People who wish to get involved can check out the operation at www.rocketcrusade.com.
Brittian has now become the latest in a long line of innovators who have experimented with rocket powered vehicles, including Fritz von Opel, who in 1928 built and test ran a rocket-powered motorcycle called the Monster.
400 MPH may be a tad quicker than your average street legal motorcycle but it is not the record.  The record was set in September 2010 by Rocky Robinson who went 605.697 mph in the Top Oil Ack-Attack Streamliner.
Russ Brown Motorcycle Attorneys®