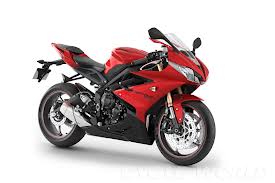 For those of you who are sport bike fans…fasten your seat belts as Triumph is unveiling what it calls “the most balanced bike ever created.” This two wheeled sportbike will combine the right mix of speed, agility, torque, responsiveness and poise.   The Daytona 675R by Triumph Motorcycle was unveiled at the International Motorcycle Show last weekend in New York City.
Triumph has managed to achieve all of this through numerous unique innovations to the bike’s frame and design but it all starts with the engine. Engineering and constructing the new engine is always a challenge and Triumph has come up with a power plant made from aluminum with a ceramic liner that enhances performance. The new engine components will not sacrifice speed and handling as the makeup of the motor reduces the overall weight of the engine versus what it would have been through conventional construction materials. Reaching a red-line of 14,400 rpm, combined with a large air intake vent for maximum performance, this bike can really motor. Clutchless gear changing allows for maximum race feel acceleration letting the rider reach cruising speeds without even dialing back on the throttle!
Triumph didn’t stop there. They’ve ensured that the bike can handle as well, by introducing what they call “dynamic handling”. With central weighting, race caliber brakes and suspension, and steering dampers, Triumph has done its best to ensure that not only can this bike be extremely fast, but it can also stop and corner on a dime. Triumph has also added amenities in order to ensure easier riding. They have incorporated switchable ABS which can be switched on or off according to rider preference, slip assist clutch to ensure no rear wheel lock up, and programmable instruments on the dash to customize your bikes performance to your liking.
The Daytona 675R starts at about $13,500 and goes up with the more features you want to include on your version, but, if you are an avid sport bike fan, with a passion for performance…this bike is for you.