California Is Perfect For Riding Motorcycles 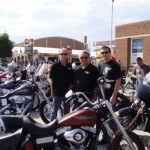 Motorcycle Lawyer: Having spent a lot of time on the East coast, I have had an ongoing dialog with friends who live in the east on where the perfect place to ride a motorcycle is. As far as I am concerned I can’t think of any place I would rather spend my days riding my old Panhead than sunny California.
I don’t know about you, but nothing could be better than being in the wind on coast, and then moving inland to cruise the California backroads. With so many good weather riding days and a multitude of options for both short and long distance runs, California is a biker’s paradise. Granted there is intense traffic in almost every major city and with gas prices creeping up and generally higher than most east coast cities, isn’t that a small price to pay in exchange for nearly optimal year round riding conditions.
I lived in Northern Michigan for 5 years and while I enjoyed some of the best rides up and down US 31 all the up to US 2 and the Wisconsin border, with the only real riding weather after April until October I found myself so desperate to ride my bike in the winter that I had to put my old Panhead in my work van and trek to my sisters house Bloomington Indiana just so I could ride on snow free roads.
While doing some article research online I actually came across a few sites dedicated to inclement riding, and while I found it interesting, the actual thought of riding my Harley in 20-degree weather along snow and ice covered roads brought visions of me spinning out or freezing my buns off… no thank you, I am an adventurous soul, but I prefer mildly worn country roads to salt encrusted winter highways.
I will contend that if you were willing to invest in a decent enduro or multi terrain motorcycle, making a trek to the upper peninsula could be one wild ride, but then again you had better be prepared to deal with Deer and Moose jumping out in front of ya. I had that happen to me once while in my work van, and even at 40 miles an hour the mid sized deer that ran out in front of me on I 75 all but totaled my trusty Fords front end.
Hey I am a city kinda guy, and snow riding isn’t for me, but hey if you can just suck it up and wait till the snow melts exploring the back roads of Northern Michigan easily rates almost as cool as hauling ass down California highway 14 from Bishop to Los Angeles.
Motorcycle Lawyer California

California has the highest number of motorcycle registrations in the US. If you are injured in a California motorcycle accident be sure to call Russ Brown Motorcycle Attorneys®. Russ has been fighting for injured bikers in California for over thirty years. Call Motorcycle Lawyer Russ Brown 1-800-424-5377