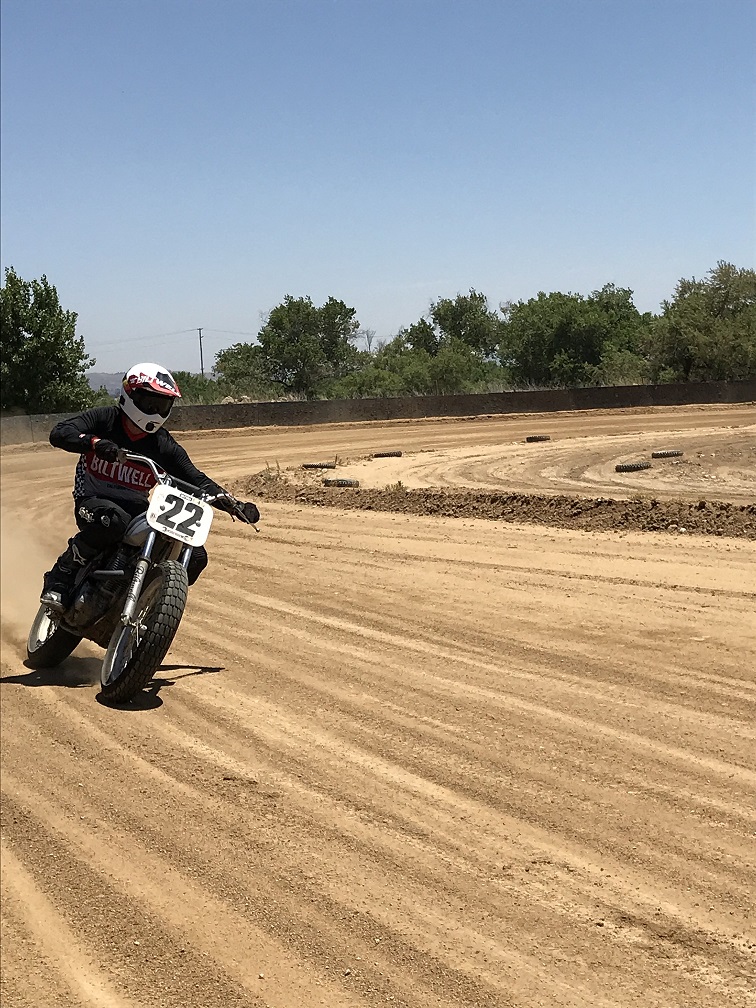 Ever since I attended a Speedway in Costa Mesa, I’ve been attracted to flat track racing. The bikes are simple but fast (often built san’s brakes) and are relatively inexpensive to buy/build.
Going fast and turning left seemed to be the only skills one would need to compete (so I naively thought) and if ya had some guts, you might just win a race or three. 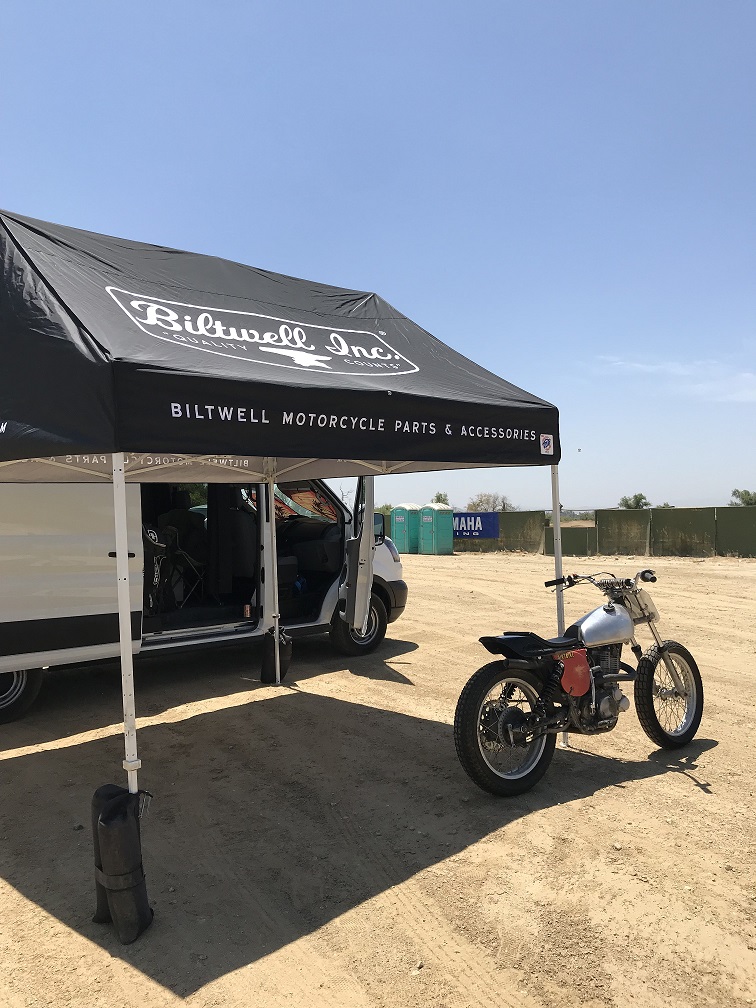 That’s what I USED to think about racing flat track. Now that I’ve done it a bit, I know it’s a tough sport. I figured having a fair amount of highway and dual sport miles under my belt, I’d be decent on an oval dirt course but I was wrong. After having taken a couple classes with the American SuperCamp school, I learned a lot of flat track riding is inherent only to this particular discipline of motorcycle racing. Coming into a turn hot, right elbow up and pushing the bars down isn’t a natural thought and is actually counter intuitive to what you think you have to do to make a left in the dirt but it works! 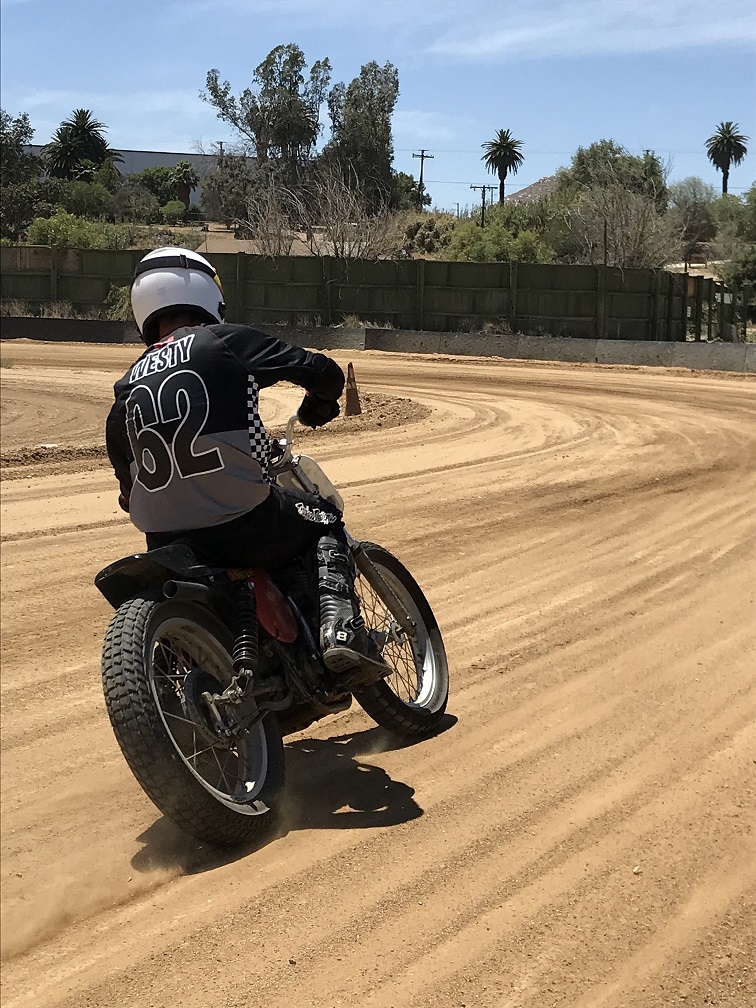 Another idea foreign to me when I started was not trying to take the shortest line possible. There’s a science to picking a fast track and it isn’t necessarily the shortest distance between two points.
Having learned some fundamentals, putting them into practice is the next step. Milestone MX Park in Riverside has an excellent flat track that’s open to the public most days of the week so in light of the upcoming Born Free Stampede, me and some friends decided to head out there on a Thursday and catch some laps. 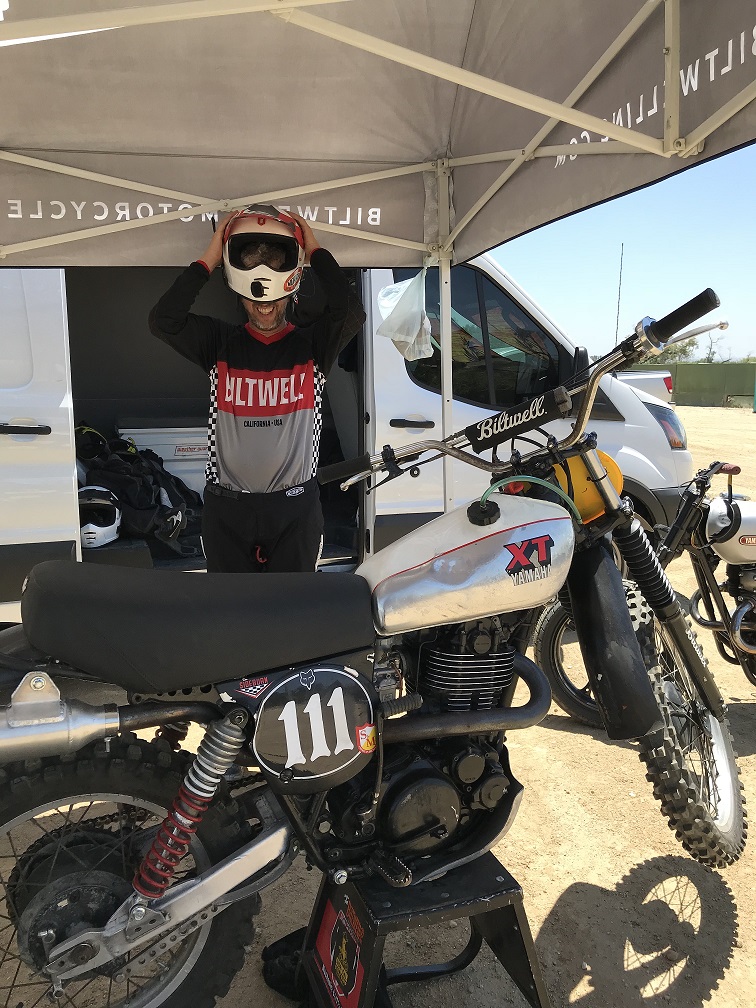 Riverside in June is hot, Riverside after lunch in June is hotter. With temps close to 100, suiting up in a bunch of protective gear never sounds fun but having all your skin come off because you aren’t wearing any gear sounds worse so out came the layers of Lycra and plastic that make up most of today’s pads and undergarments.
Than a jersey, pants, boots and a Biltwell helmet and gloves to make sure you’re nice and toasty. Next comes the kicking and cursing that comes with getting my Yamaha 1976 TT500 to come to life. These single cylinder, air cooled thumpers are fun and plenty fast enough to get hurt but sometimes a real pain in the butt to get ‘em fired up. Layers and layers of gear never help that process. 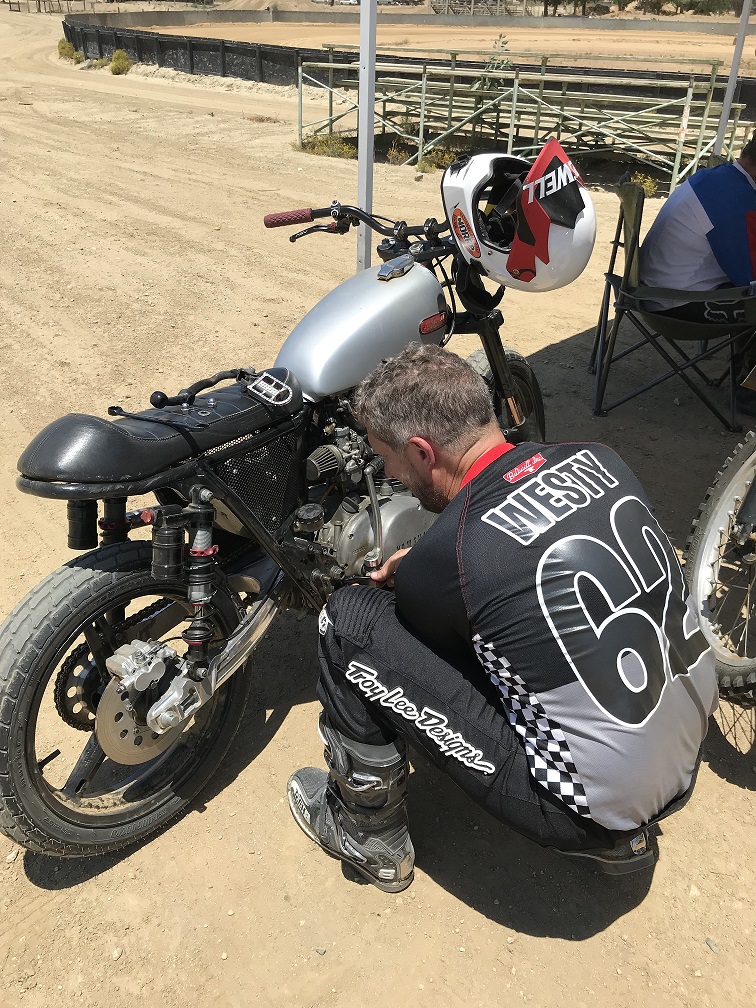 Once the bike fires, it’s time to bust out some laps. Milestone is shorter than most tracks but I think it’s the perfect length. The straits aren’t so long you get going too fast but you still get a good oval shaped flow going and can rail it quite a bit.
None of the guys practicing with me (Westy and Bill) are great at flat tracking but we’re all close in our skill sets so mock racing with ‘em is a lot of fun (it’s always better riding with guys that are close to your riding level). 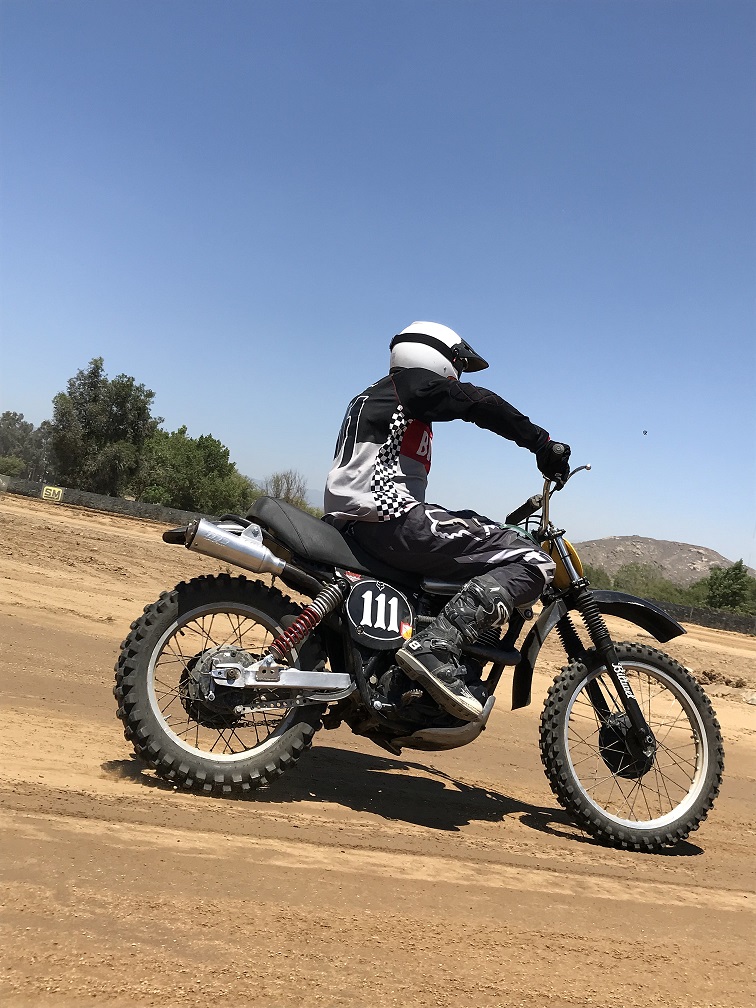 We all knew we needed some work on our starts (half the time, the guy that’s in front in the first turn stay’s in front) so we lined up mid track, counted to 3 and pinned it. I’m know to pop a wheelie in the the gate (by accident) and it’s not a good way to get the hole shot so I started in second gear for this segment of our track day. I wasn’t getting out of the gate quite as fast but I didn’t have to worry about the aforementioned wheelie popping or having to shifting before the first turn so I think I’m going to try this tactic in next week’s race in the City of Industry. 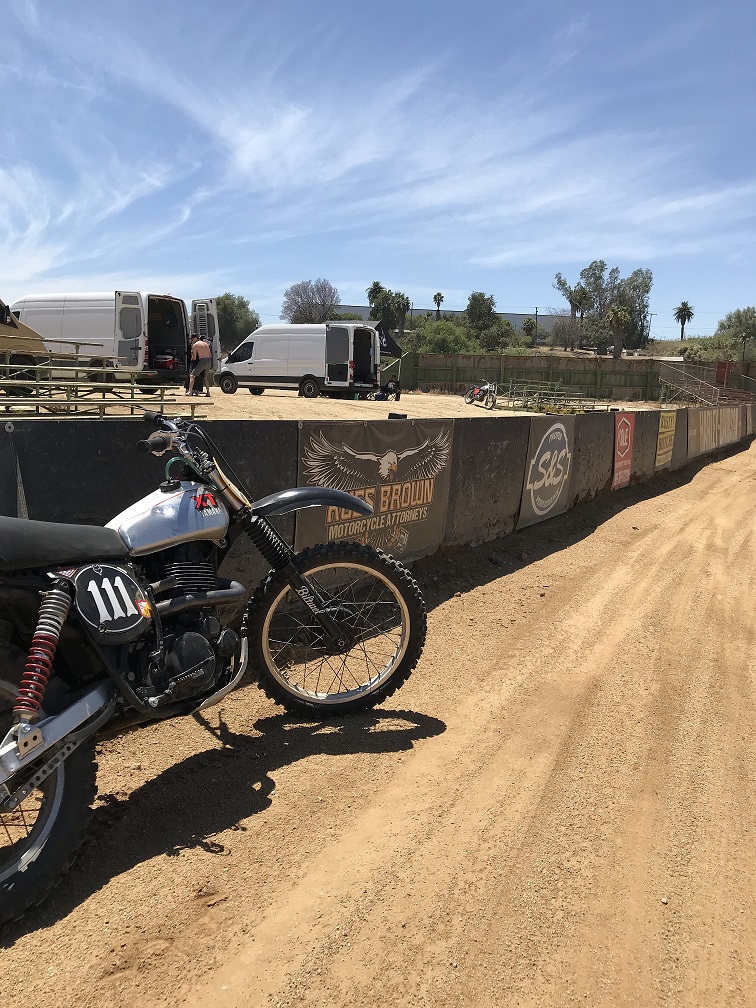 Feeling a little bit better about our starts, we worked on our lines. Usually the best line on a track is apparent after a couple moto’s so that’s never the issue…getting around the guy in front of you is. Banging bars with your buddies on bikes in excess of 40 years old is a ton fun, especially when you have the track to yourselves like we did on this warm Southern California Thursday.
Sliding around the dirt oval (or at least telling yourself you were) and trying to slip by another rider is a pretty exhilarating feeling but the heat was starting to wear on us a bit and when the water truck pulled up, signaling an end to our fun, we were more than happy to exit the track. Pulling back into our pits, stripping off the sweaty gear and hitting the ice chest is especially refreshing after a warm one on the track and it’s even better after few laps crash-free. If you’re on the fence about flat track, don’t be. Borrow the neighbor kids KLX 110 and head on over to Milestone or even just a nearby dirt lot. I promise you’ll have a blast.