Jeff Shepard has always been a man on a mission. Public service was his calling, so eight years as a firefighter was a natural fit for him. Having always wanted to become a police motor officer though, he changed careers, working traffic on four wheels before getting his shot and living his dream. 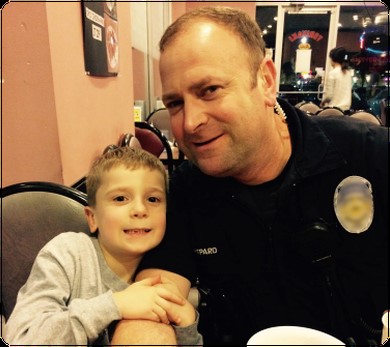 In the line of duty, Jeff has survived a shotgun blast while on a routine traffic stop. While the windshield of his patrol car took most of the damage, lingering after-effects played on Jeff’s mind. Years later while working crowds for a 4th of July celebration, a pipe bomb going off near Jeff and his partner brought a rush of feelings back that didn’t go away. Despite working with therapists to try and get back a sense of normalcy, he was eventually medically retired from the effects of PTSD. Jeff Remembers it like this:

“They gave me a few days off and, I could feel this switch happen you know […], something just wasn’t right. I wasn’t sleeping, if I did fall asleep I was having nightmares, waking up in cold sweats… so I eventually reached out to the department and said something’s not feeling right. So they sent me to the department psychologist before returning to work, and I was diagnosed with PTSD.”

In his struggle to understand the disorder that took away his dream job and his sense of purpose as a public servant, he learned more than just the mechanics of PTSD and how it applied to him: he started to see how police departments struggled to understand it as well.

“August of last year all [of my] doctors got together and basically said, ‘this guy is not going to be able to return to work,’ and so they medically retired me.” Some departments had an entire process in place, able to deal with it as quickly as a back injury. Others simply gave officers a few days off and everyone just carried on as though nothing happened. Some officers might fear a stigma of being labeled with the condition, affecting their ability to advance in the field or even remain employed. Fellow officers aren’t sure how to reach out and check-in with their friends, adhering to the macho “just shake it off and carry on” mentality.
Suddenly, Jeff Shepard had a new opportunity to serve a community. Working with the Permission To Start Dreaming Foundation (PTSDfoundation.org), he got the idea to do a ride… the Ride4Relief. In Jeff’s own words:

“I had been doing different stuff with [PTSD Foundation], you know a golf tournament […], a prayer breakfast, doing stuff with them, being around like-minded people, [getting] some camaraderie, [being around] people who knew what I was going through.
So I approached them two summers ago and said, ‘hey, I’d like to do a ride to raise some money, […] a ride for relief for veterans and first responders. So we did our first ride in the summer of 2017, and we raised about $4000, had about 50-60 riders that came out.”

It wasn’t just a way to raise money though: it turned out to be therapeutic for Jeff to be out riding again. Shortly after, while attending SEMA (the Specialty Equipment Market Association, a huge industry show in Las Vegas), Jeff spoke with several company representatives and it planted the seed to do another, bigger ride.
So in June of 2018 (which is also PTSD Awareness Month), Jeff set out for 45 days across the US. He went straight to police stations and firehouses to help spread the word. This type of direct activism (as opposed to fundraising) is of particular interest to me because it aims to change current conditions and perceptions, as opposed to providing relief from them. But let’s learn more about the ride, again in Jeff’s own words:

“I rode from Seattle to Virginia to raise awareness […]. The ride kind of morphed: it started out to just be a memorial ride for the founder of PTSD Foundation… her son, Kyle, struggled with PTSD and lost his life, and is buried in Virginia. [But] the more I started finding out about officer wellness and resiliency, I started finding out about police departments that are starting to recognize it, basically training their officers starting at the academy […] so if they are dealing with something they can come forward and have the outlets and support to talk about it and get the help that they need.”

The ride was a success. By working with multiple police and fire departments around the country, Jeff was able to meet and highlight cities that had the resources and programs already in place. Departments that wouldn’t likely be in contact with each other now had Jeff as a bridge, making them aware of each other and opening new channels of cooperation. 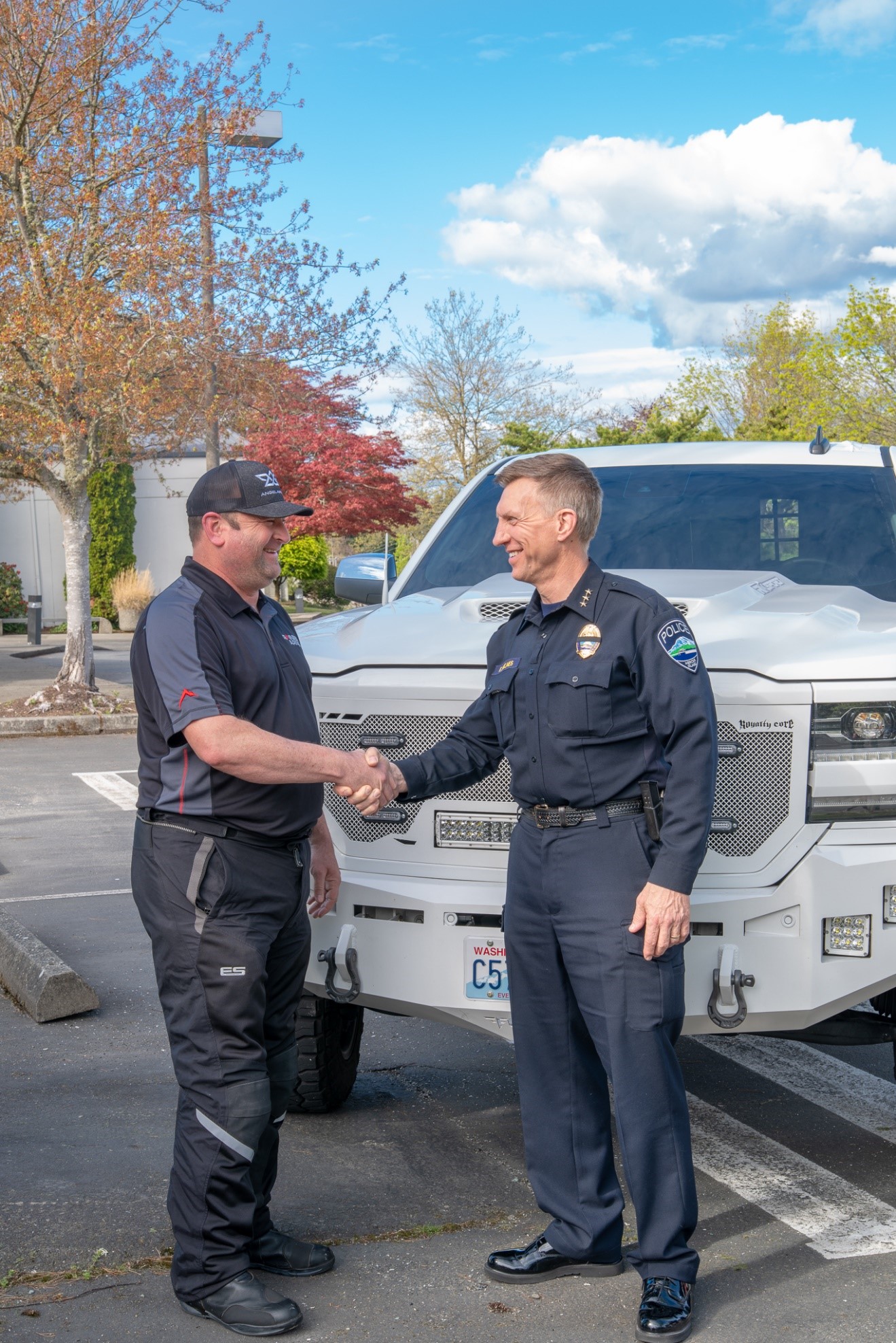 Speaking with police and fire departments across the nation allows Jeff Shepard to amass a huge amount of contacts who can benefit from sharing their knowledge with each other. Photo: Wild Fern Photography.

There aren’t a lot of reasons for, say, Casper, Wyoming’s police department to talk to the police in Denver, Colorado. Yet when a first responder nearly loses their life or watches someone else lose their life, the physical distance between the two locations pales in comparison to the emotional distance someone suffering PTSD feels from everyone around them. According to Jeff:

“So that’s what we definitely wanted to start highlighting, was saying, ‘hey, there are departments out here that are doing [something about PTSD]’, and for the departments that don’t have it, ‘hey, here are some resources,’ and every department that I talked to, when I was being interviewed, they would put it out there that, ‘hey, if there are any neighboring cities who have questions, who want to start a program like this, we have the resources.’” Of course, the mission is ongoing. For 2019 Jeff has done another big ride, leaving May 24th and stopping in 35 cities through June and July (see the Ride4Relief website for dates and locations). The ride was bolstered by new support from AMSOIL, who has come on as a title sponsor. Staying onboard again was  Noble Rush Auburn, who provided Jeff with a 2019 Honda Goldwing to rack up the miles on.  Ride4Relief will also get support from Law Enforcement Today, posting on their social media to keep supporters updated on the ride and freeing Jeff to focus on the people in front of him each day. Ride4Relief also has their eye on doing shorter, regional rides. Jeff will be heading to TriggrCon in late July and will also have a display again at SEMA in November. Setting up at events like this allow the time needed to have conversations about the wider aspects of raising awareness and funding, while the ride itself gets to focus on bringing to light the many resources available through outreach and interdepartmental cooperation.

“When I was diagnosed, my department just wasn’t equipped for that. So they didn’t really know what to do. […] they had never had anybody who was diagnosed with PTSD. […] so they were one of those departments that didn’t have a structure of, ‘what do we do, how do we help him.’ I was on my own to figure it out.”

And so continues a mission worth putting your all into. After decades of serving other people and feeling good about it, Jeff Shepard has managed to reconnect to that sense of purpose while still riding atop a motorcycle. And the millions of us who ride don’t need to suffer from life-changing emotional trauma to understand the healing power of “wind therapy.” From something as simple as a tough day at the office to mourning the loss of a loved one, pointing the front wheel toward destinations unknown is a perfect way to find exactly where you are supposed to be.

“That was one of my therapies, was I could get on my motorcycle and I didn’t have to think about anything. I could just go [and] see the scenery, and just be on my bike… focus on that.”