Wow, Just wow. I would have never expected to be back racing Motoamerica. It was an amazing adventure and I had a ton of fun. I think it’s safe to say I came back a different person, Physically, Mentally and Spiritually. During the moments a year ago when I was not racing, it was a much-needed reset even if I didn’t think so at the time. Now, let’s get into the juicy details.

In Practice 1, I gave myself a few laps to get used to the track again. We only had 20 min of practice before qualifying. I got up to speed fast and ended up 9th. I was shocked that I did so well so early on. I could keep some good corner speed and match the leaders decently so I was very confident going into Qualifying 1. Unfortunately, that was the problem. 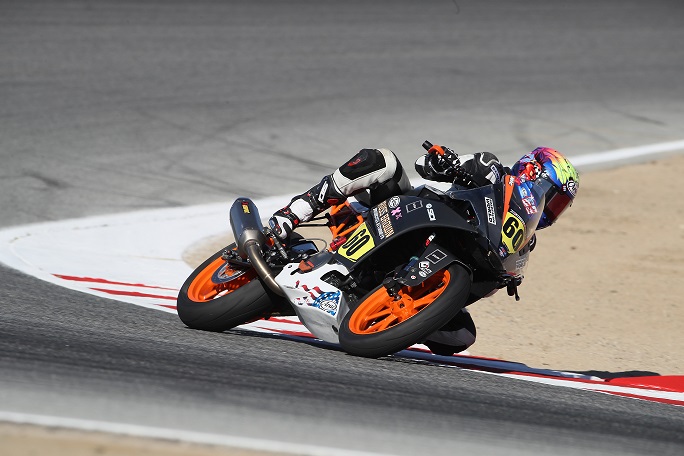 In Qualifying 1, I was very confident pumped up. On lap 4 I crashed in turn 6. I was riding very amped and was not focusing. For example, In Practice all I focused on was fun and the results came. But in Qualifying, I focused on going fast and I ended up crashing before I could even get a fast lap in. So, I was sitting in 17th place for the race. Luckily for me, we had a second Qualifying on Sunday. We did not have any track time on Saturday due to World Superbike being there so we just we made some changes to the forks and hung around on Saturday. Let me tell you, I was bored out of my mind the whole day. For qualifying 2 I was focusing on having fun and seeing what I could do, I was nervous about the weather. We went out at 8:45 am and knowing Laguna being next to the ocean. It was cold and very foggy. Luckily for me, I put my head down and dropped a full second. I was sitting 12th in that session which put my 14th on the grid for the race. I had a little work to do but planned on sticking with Sean off the start.

A Few hours later was the race. Lucky for me, my buddy, Cameron Gish was there on the grid with me like old times. As well as my friend Max Flinders who brought his Girlfriend to be my umbrella girl which was a real treat. I was focused and ready to get a good start. When the lights went out I had a hard time up shifting because every time I did the rev limiter came on due to the new RPM limit. ( We had the same Weight and RPM limit as the new KTM’s Which have an extra 10HP said by Uli from HMC) A lot of people flew by me off the start into turn 1. I braked later than everyone else and came around 4 people on the outside of turn 1. By the time I got to turn 5, I realized my bike was sliding into every single corner and chattering like crazy. Little did I know we forgot to check tire pressure and I had an extra 10 PSI in the front and rear tire. I was pushing hard and crashing in every single corner. I matched my Qualifying time somehow and was running top 15. Then a red flag came out on the 6th lap, It wasn’t for me but I hope the rider is okay. We figured out the pressures and then went out. I had a new grid position which was 15th. I got a better start and put my head down for the 5 lap sprint. I worked my way up to 10th right behind the battle for 3rd place. Unfortunately, I had a hard time getting around the 9th place rider who was a tad bit slower than me.  On the final lap, I stuffed 9th place going into turn 3, then I check out from him and was slowly catching up to the lead group but I did not have enough time. Overall I feel I did really well being down on trap speed against the Ninja 400’s (Fastest Ninja 400 was 110mph and I was 102). Hopefully, I will have another opportunity to race MotoAmerica again soon and go for a top 5. I absolutely can’t thank the whole ASMA family enough and everyone else who donated to make this trip a reality! You guys are amazing! Also a massive thanks to all my sponsors who make this possible!