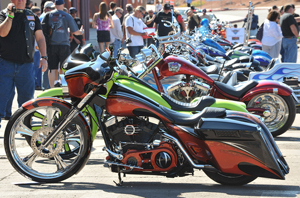 Motorcycles are Not for Clowning Around 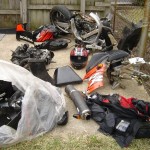 Motorcycles are NOT for Clowning Around

Jason
My son Jason had just up-graded from a 250 Ninja to a CBR900. He had just picked it up on Wednesday and the following Saturday it was nice out. I got a call from him Sat around 3:15 and I thought he was calling to see when I would get home to go for a ride. However it was a call to tell me He just totaled the bike on Route 645 near Bethel, PA.
While he was explaining what had happened the ambulance came before he could tell me everything and he had to hang up. I got a hold of him later and he told me they were taking him to the Hershey Trauma center. All I got out of him was his thumb hurt. Try telling Mom that when she didn’t want him riding in the first place.
We got to the Hershey Hospital and tracked him down, he was sitting in there with a smile on his face and acting like nothing happened. I can’t Explain the Feeling of Happiness. He said just his thumb hurt.

After all the tests they came up with two fractures; a thumb and finger. He also had road rash on his left arm and right butt cheek. The EMS guys said he was very lucky to be alive. All of this was due to my sons quick reaction and wearing the safety pieces.
Before the motorcycle accident
When he came to the top of a small hill his front tire hit a stone and lifted his front tire off the ground. He then felt the back tire leaving the road. He quickly pushed the bike away from him with both his hands and feet. He then tucked and rolled to a stop. The bike hit a telephone pole. He remembered then getting up and taking pieces of his bike off the road.

After the motorcycle accident

His riding buddy (Doug) said he looked in his rear view mirror and all he saw was a dust of dirt and Jason standing up and dragging pieces of his bike off the road. He turned around to go back and check him out, the first thing Jason said to him was, “I will need a NEW BIKE.”
My son had on a full face helmet, sport jacket with pads, leather gloves and steel toed shoes! Had he not been properly protected by wearing the right motorcycle apparel the damage to him could have been much worse. I’m happy that he is doing okay and I’d like this to encourage everyone to wear the proper safety equipment when they ride.
Go for it…Ride Hard, Loud but Safe…Huffy
Special guest article by “Huffy the Clown”
https://www.huffytheclown.com/