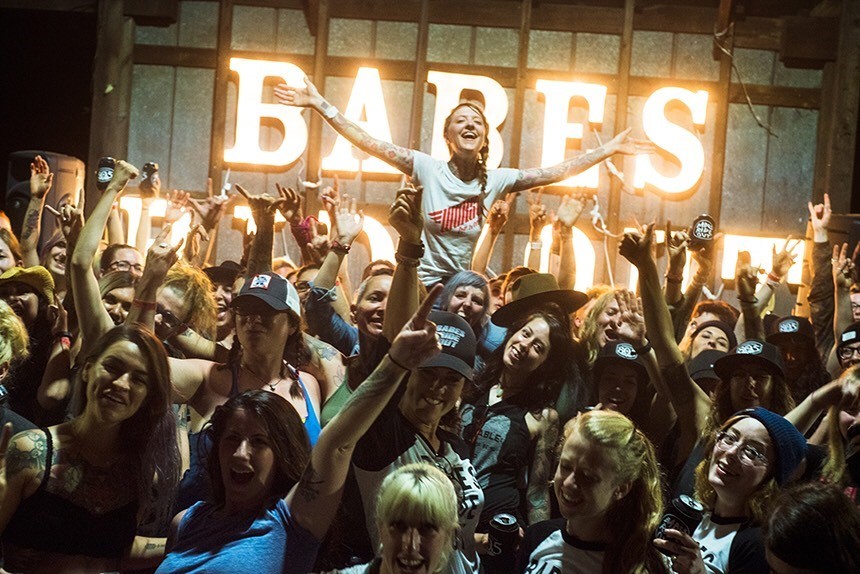 The Power of Babes Ride Out

If you are a female motorcyclist or know one, good chance you’ve heard of Babes Ride Out (@babesrideout). It’s a wildly successful girls only campout created by a couple of friends. Anya Violet and Ashmore Ellis organized the first campout back in 2013. Their only goal was to create a way to introduce woman riders to more like-minded “Babes”. The first event brought together roughly 50 women and took place down a dusty road, to a beautiful hidden gem in Borrego Springs. We all knew we technically weren’t supposed to camp there, but we didn’t care. I say “we” because I was lucky enough to be part of the very first Babes Ride Out.  I heard about the event from a long-time friend, and he got me in touch with Ashmore Ellis. I was so excited for the chance to finally meet other female riders. At that time, I had been riding a motorcycle for over 7 years and only knew of one other female rider. At the first Babes, I met women from all over. New York, Portland Oregon, even some that lived minutes from my house and somehow we had never met. All from different walks of life. From models to Moms. 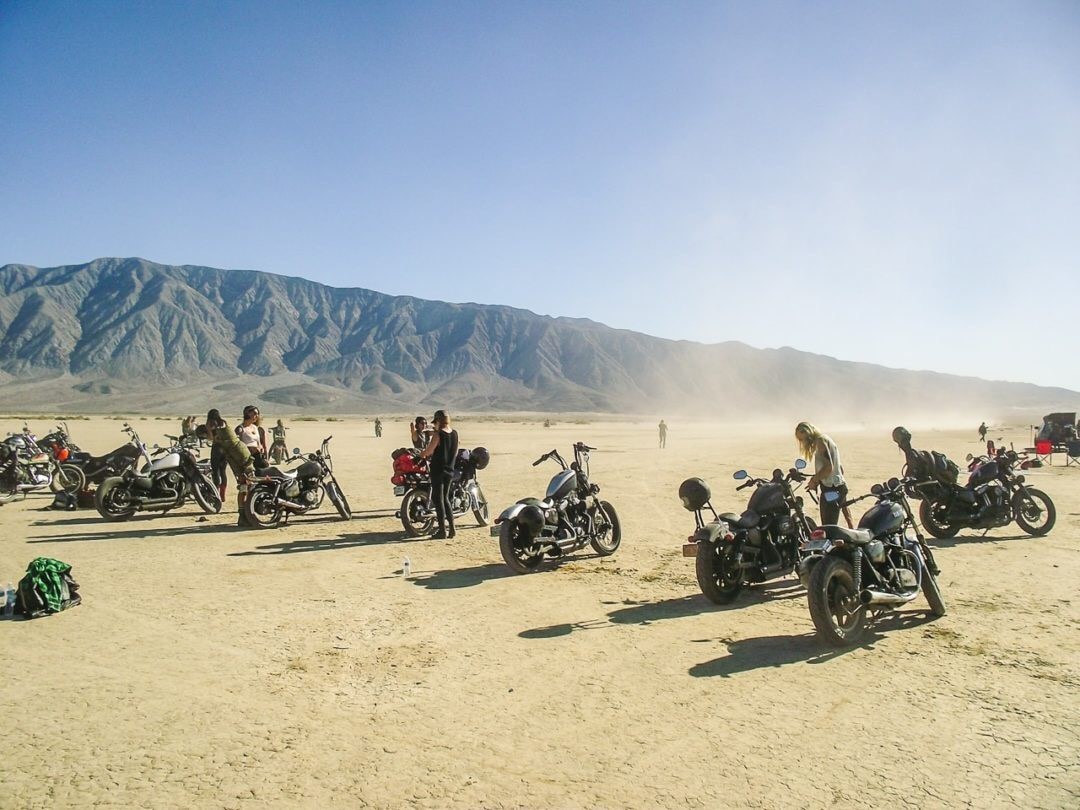 The first Babes event in 2013, was called Babes in Borrego. Tucked away in a private area that ventured a few miles off the main road in Borrego Springs, Surrounded by nothing but mountains and blue skies. CA. Photo via Sanna Coates

Today Babes Ride Out has taken over the scene and introduced THOUSANDS of women to each other.
The great thing about Babes is, not only has it become THE place to meet other women riders, but it has also become a springboard for countless other opportunities. Opportunities that have created careers. Whether within the corporate motorcycle industry or independently.

Off the top of my head, I could probably name at least 30 success stories. It’s interesting to watch a simple idea organized by two friends take on such a life-changing role, in so many women’s lives. My small nonprofit Moto F. A. M., (@moto_fam) is one of those success stories. I remember sitting down with Babes Ride Out co-founders Anya & Ashmore and casually speaking about an idea I had to help raise money for downed riders. No quicker than I could finish explaining my idea, they both blurted “we’d back that idea all the way”. Since that conversation, Moto F. A. M. has been included in every Babes Ride Out event. Raising thousands of dollars each year, to aid riders in need after a life-changing motorcycle accident. So far, we’ve helped over 160 riders and provided the opportunity for 40 riders to participate in an Advanced Rider Training Clinic. 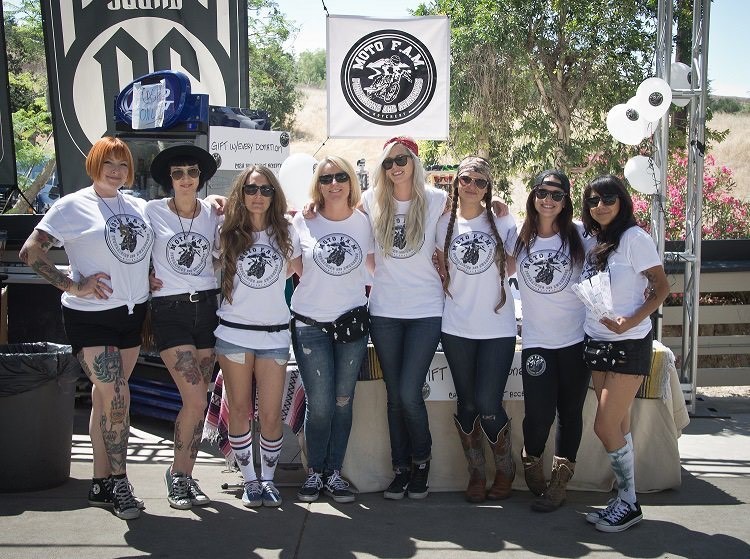 Moto F.A.M.’s first solo fundraiser, in 2015 took place in Santiago Canyon and drew in over 400 riders. Image via: motofam.com

June 16th, I attended the East Coast Babes Ride Out. This event is much smaller than its west coast counterpart, which has almost 1,800 attendees and nestled in a sleepily town in the California desert. East coast, on the other hand, had roughly 500 women and is close to the Catskills Mountains. It has an incredibly lush and intense green landscape. East coast attendees are a group of tough yet open-hearted Babes. My role at Babes Ride Out is to run the raffle. I have the pleasure of meeting just about every attendee. Our raffle is filled with beautiful one of a kind, hand painted Biltwell Inc helmets (@biltwellinc), LowBrow Customs gas tanks (@lowbrowcustoms) and Atwlyd jackets (@atwyld). June 6th-June9th, 2019, girls arrived at a small campground located along the Delaware River in Narrowsburg, NY to experience the 4th annual Babes Ride Out East Coast. Image via: Michaela George

We call these pieces the “Artist Series”. These are all created by local east coast female artists. Artists like Sandy Brower. I met Sandy in our first year attending. She was east coast through and through. A tough, hardworking, ticket buying Fein. She’s been riding motorcycles for over 25 years. She says she’s a fan of the event because “it’s a great networking place, very few women rode back when I started and if they did you didn’t have social media to connect you”.  A statement I for one could relate to. Now she makes sure to never miss a Babes event AND every year she’s one of the top ticket buyers. This year was no exception. What was different though, was that one of the hand-made pieces added to the raffle had been created and donated by Sandy herself. 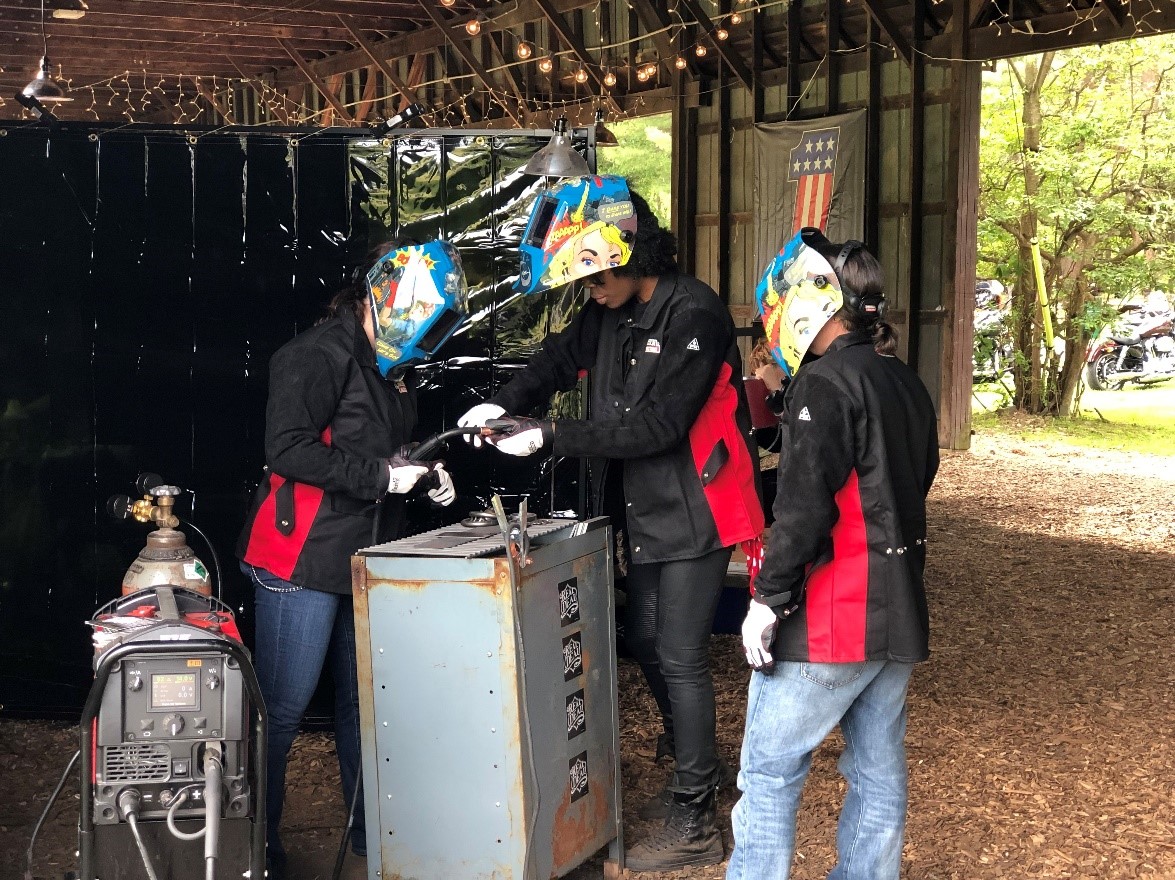 The Real Deal Revolution workshop booth at the East Coast event. This hands-on approach to learning has become a crowd favorite every year. Image via: Michaela George

Each year Babes Ride Out teams up with other female-based businesses. The Real Deal Revolution {@realdealrevolution) is one of those. The Real Deal Revolution provide hands-on training for women interested in learning more about trades that are typically male-dominated. Co-creators Jessi Combs and Theresa Contreras met during the 2012 SEMA Business Women’s Network Ford Mustang build. Right away the two developed a mutual respect for the others passion and drive. Since then they have been dedicated to sharing that passion with as many other women as possible and the Real Deal Revolution came to life. 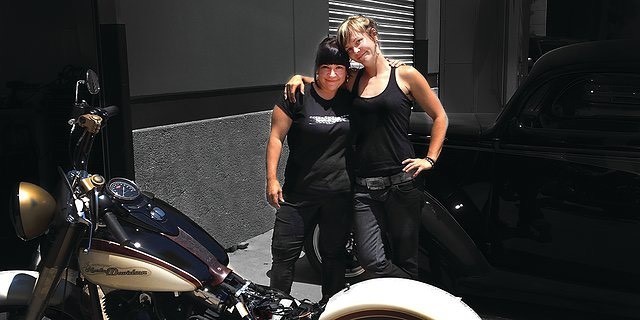 Sandy took this workshop in 2018 and has spent the last year perfecting her new craft. She has also managed to start her own shop named Eight Twelve Inc.(@eightwelveinc) 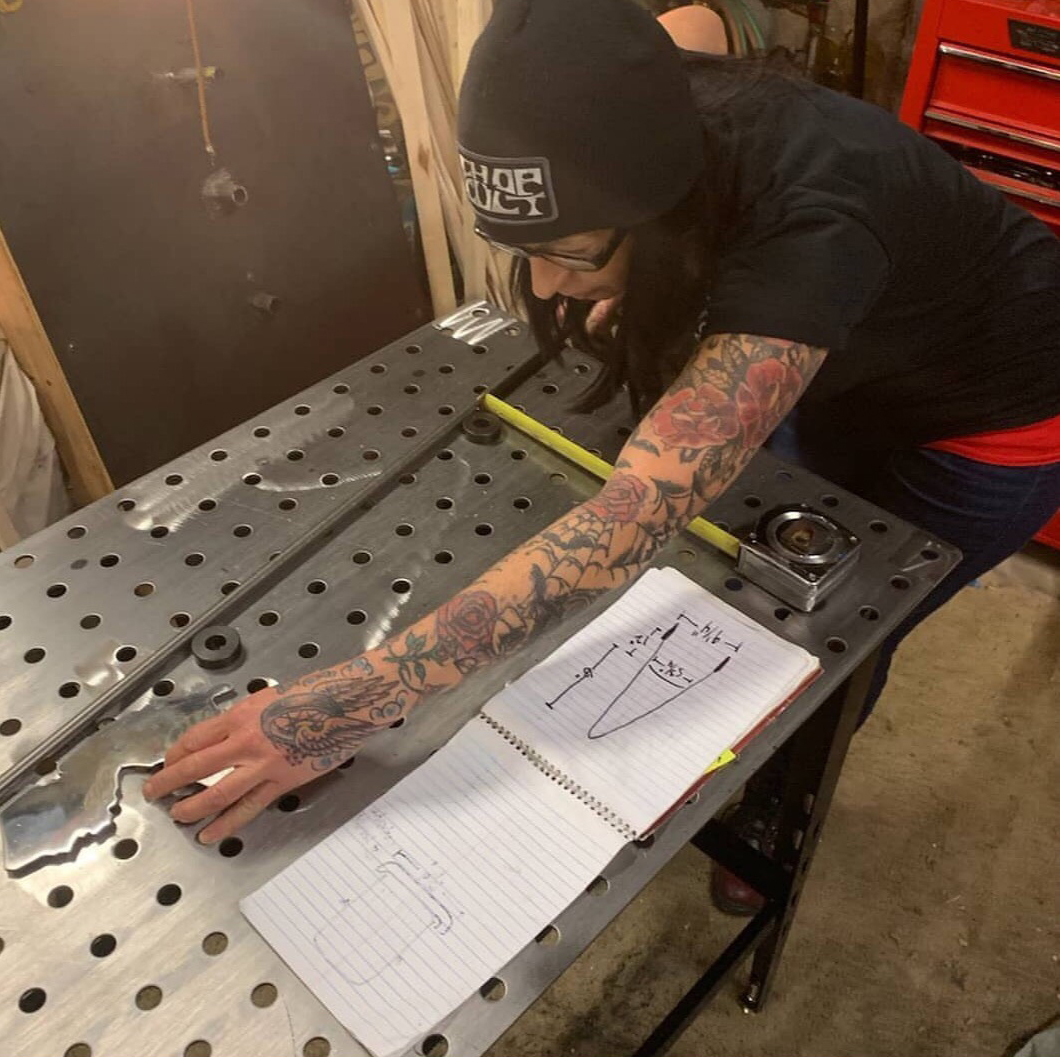 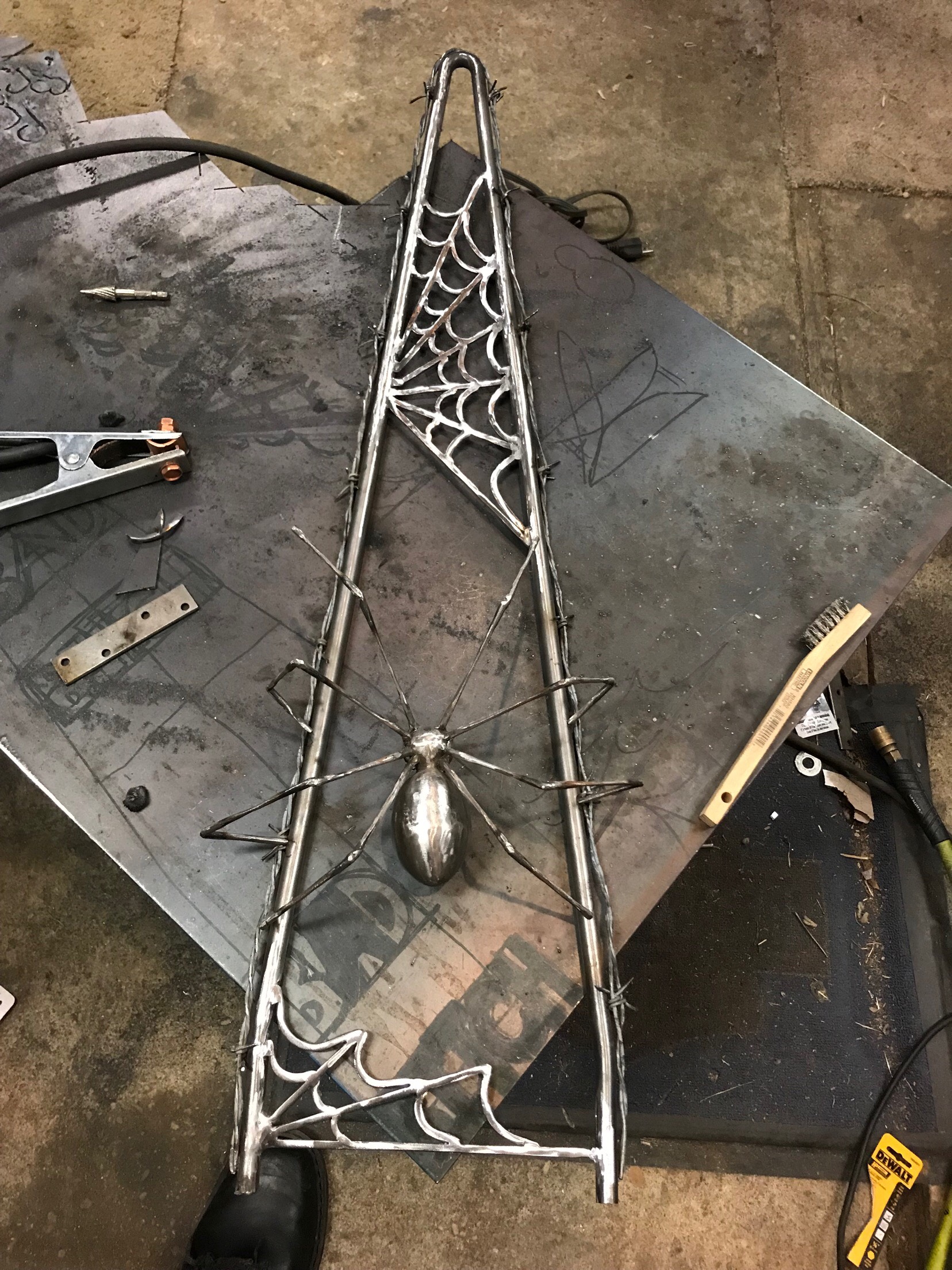 A business that has kept her busy, as word spreads. No small feat considering this is only ONE of her 4 jobs. She also works in medical billing and as a bartender.

Her donated hand-made sissy bar created a lot of buzz this year. It also helped raise a good amount of money for downed riders. I have to say though… My favorite part of the whole experience was watching Sandy and Jessi Combs reunite. Both women got teary-eyed. Sandy expressed her gratitude for Jessi’s training and encouragement. While Jessi got to see first hand how her “Revolution” workshop changed someone’s life. 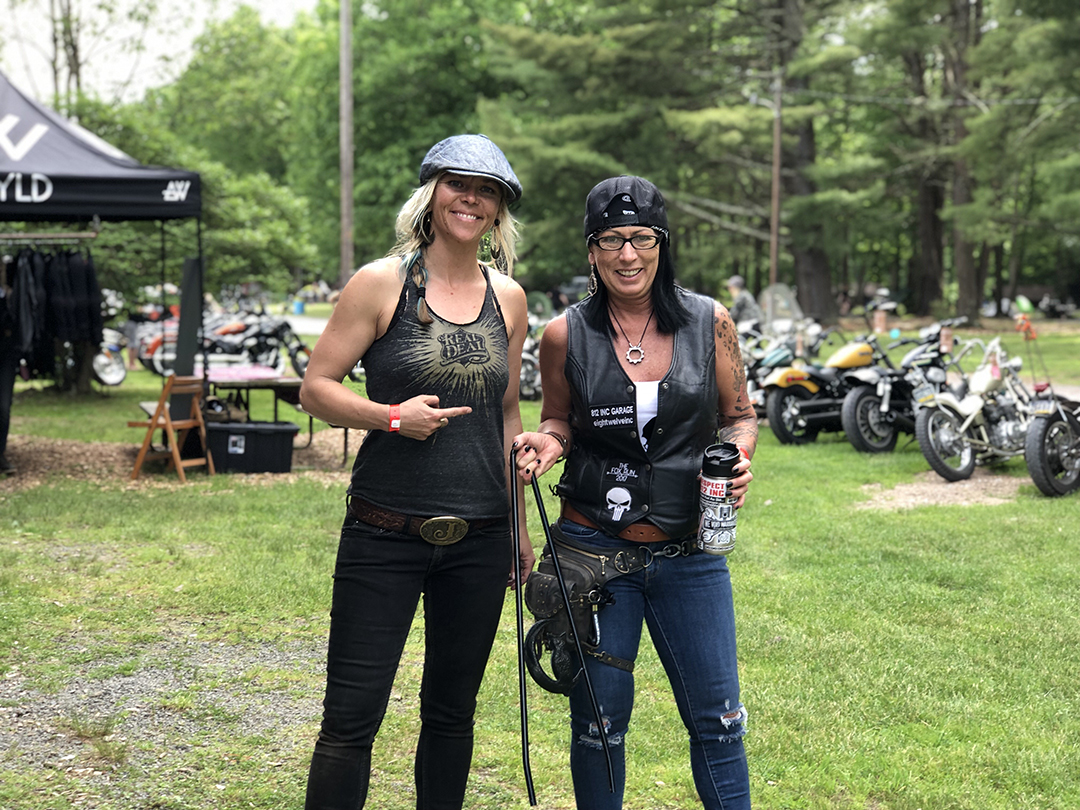 I had the pleasure of capturing this photo just after Sandy & Jessi reunited and talked about the hard work Sandy had put in over the past year, to earn her reputation as a welder. Image via: Michaela George

As Sandy walked away, Jessi looked at me and said, “that just gave me goosebumps”. I’m not gonna lie, I had them too.

I thought to myself after all that: “THIS is exactly what Babes Ride Out is all about.” The event has the power to change people’s lives. It creates opportunity, friendship, confidence, and so much more. I’m proud to support all that good stuff:) 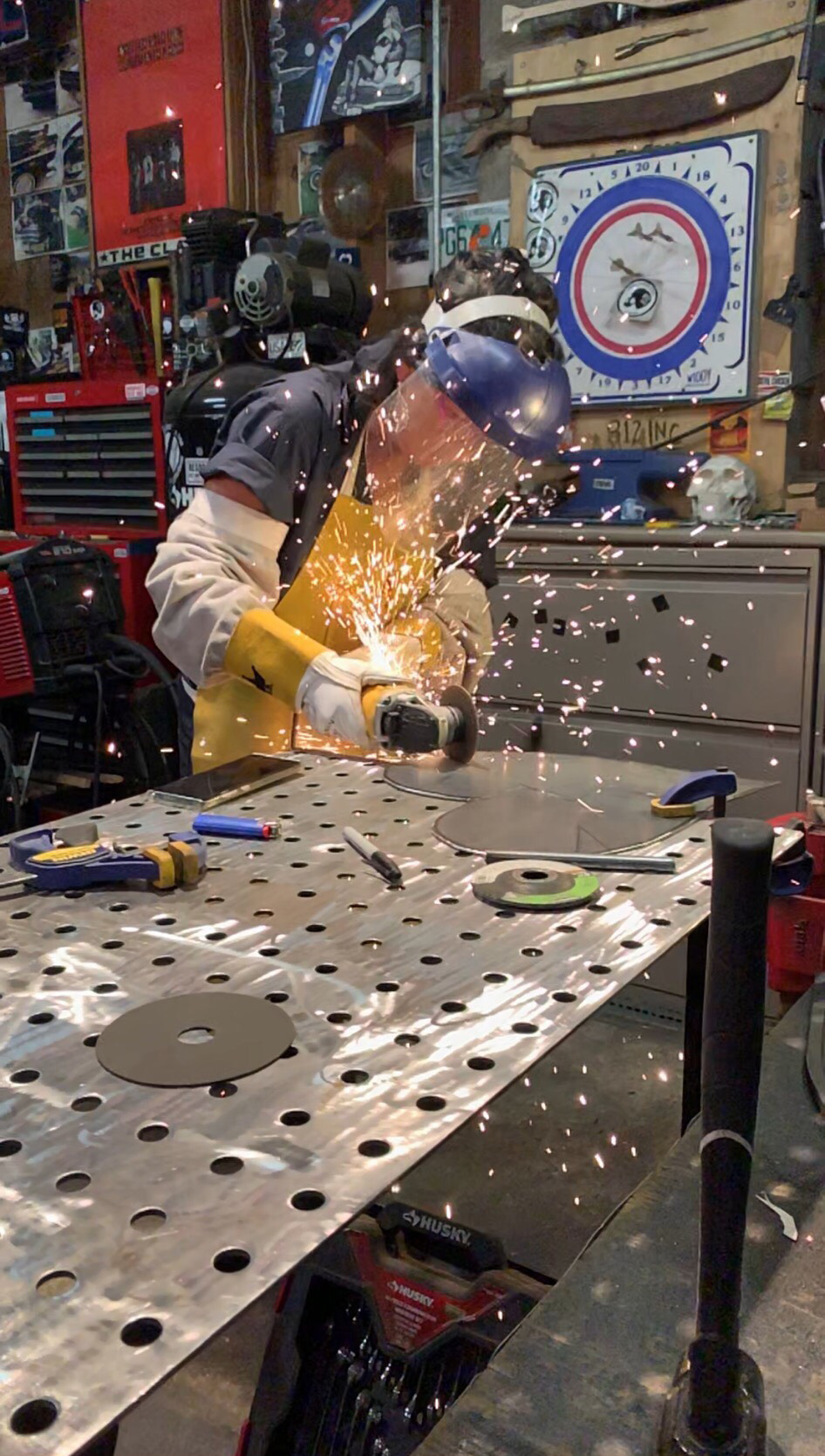 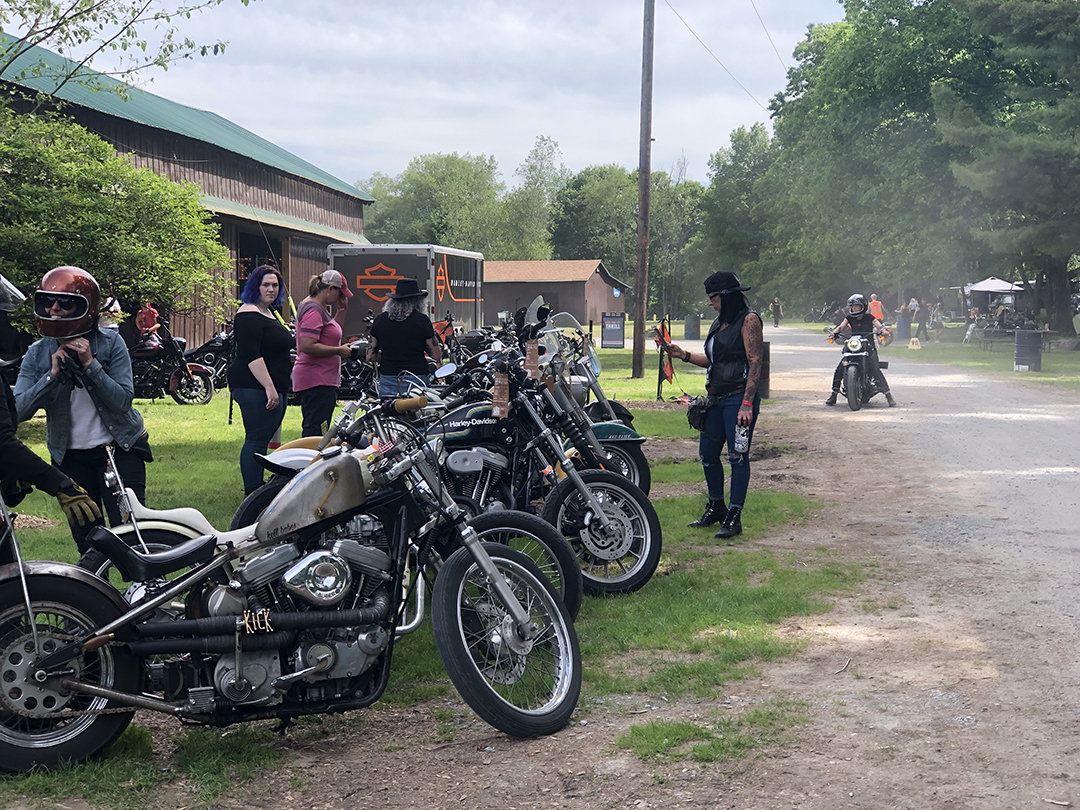 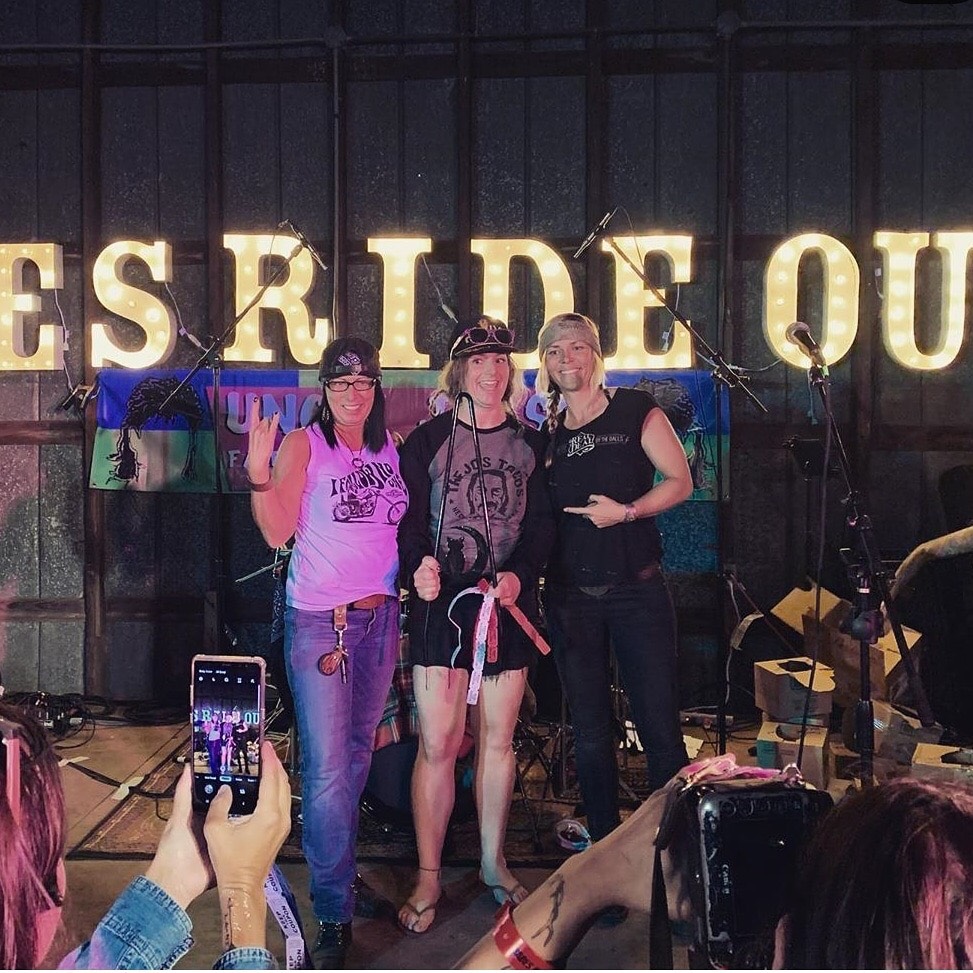