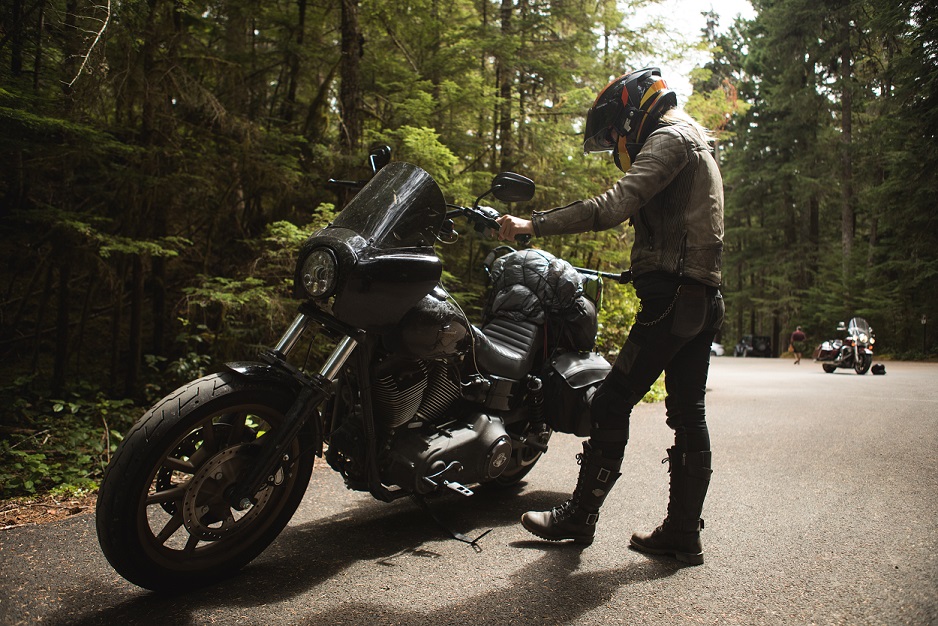 The Vision to See

Sometimes it’s nice to not plan, to just go wherever the road takes us and put our trust in the journey instead of our schedules. Yet any seasoned rider knows–things rarely go as planned on the road. That’s why sometimes you just have to go at it blind, because worse than not being able to see is having no vision at all. 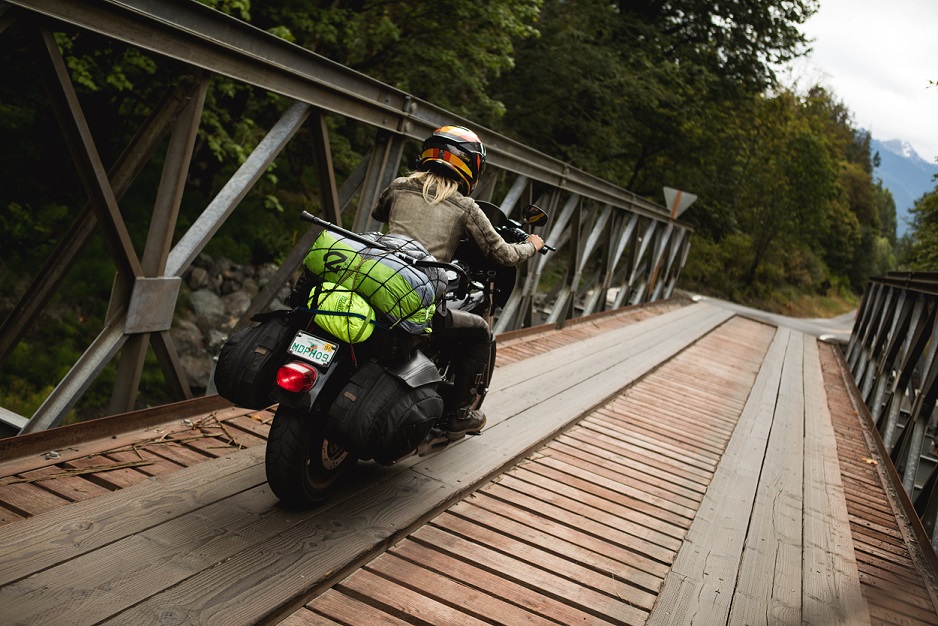 That’s what a recent trip to Olympic National Park in upstate Washington was like for me this summer. My 12,000 mile ride around the U.S. was coming to an end and I have to admit I was tired and kind of wanted to get home to take a real shower and sleep in my own bed. My boyfriend and I had just left Glacier National Park and were planning our route back to California. We had visited a good number of National Parks on our ride this summer, but when we saw there was another one only 500 miles out of the way, we thought why not see what it was all about. When you’re this close to the border of Canada and you live as far south in the US as you can go, you can’t pass up an opportunity like this.
Olympic National Park is almost 1 million acres of land, 73 miles of coastline, three distinct ecosystems, four rainforests and was formed over 30 million years ago. That whole “Ice Age” isolation led to 15 unique animals and 8 unique plants that evolved here and are found nowhere else in the world. In fact, the land is so diverse and unspoiled that the United Nations declared Olympic both an international biosphere reserve and a World Heritage site. Curiously, 13 rivers radiate out like the spokes of a wheel yet no road system traverse the entire park. Instead, a dozen spur roads lead into it from US 101, making it easily accessible from anywhere outside park grounds.
We had no idea what we were getting into when we made the decision to visit this strange and spectacular place. We rode all day from Montana, through rush hour traffic in Seattle, and made it to the town of Port Angeles just before sunset. The cold wet air was just starting to set so we quickly set up camp at a KOA, built a fire and grabbed a brochure to plan our day. It’s hard to describe Olympic and even harder to understand the brochures about it. I didn’t quite grasp why until we started exploring it ourselves the next morning. 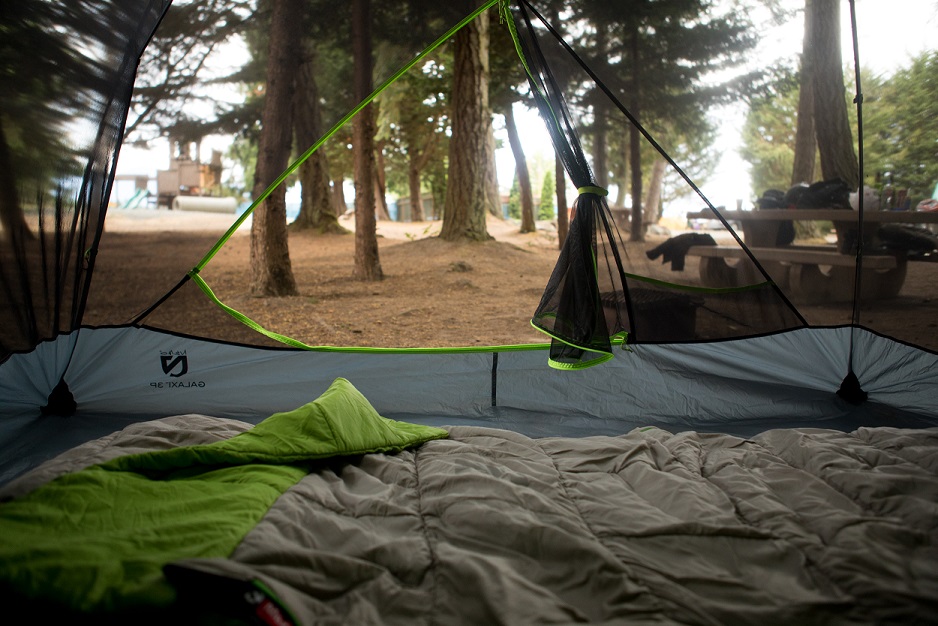 We headed into the Park from the Port Angeles entrance looking for Madison Falls. It wasn’t far into the forest that we found the trailhead to the falls and the Elwha River that runs along the road to it. Riding into the park was like being in a fairytale. The trees were old and tall. They felt protective like a kind grandfather and seemed as if at any moment they would open mouths to tell you stories and coddle you with their branches. The sky was a greyish blue and the thick forest was filled with gloom that left dampness everywhere and then just faded off into darkness. Uncertainty and curiosity blended in this place and never have I felt more alive or afraid on a ride before. 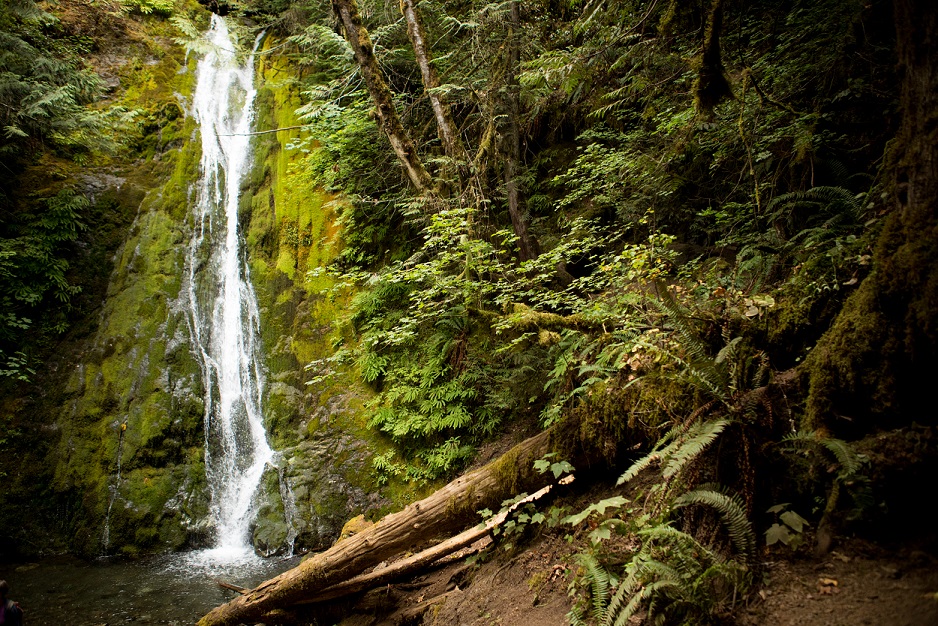 The river is home to the most robust native salmon runs in the country and the falls are only a .1 mile hike away from it. For those of you who want to experience the most of Olympic but have little time, the falls are definitely worth visiting. You can walk up to the water and wade in if you want. In fact most of the park was empty of tourists, leaving you to truly explore this fairytale spot and allow your inner imaginative child to come out. Since I didn’t really plan, I had to rely on my iPhone map and take what appeared to be roads on GPS when I had service available. We decided to ride on a small paved road farther into the park and I thought I had found the only way through the entire forest. For a while the road stayed paved but soon started to break away into sections of dirt and gravel before finally becoming just rutted out dirt. It was still a road though and we had committed this far (about 20 miles give or take). The entire time we rode, we were ascending up a mountain. Eventually it stopped at an actual trail, the “Appleton Pass”. 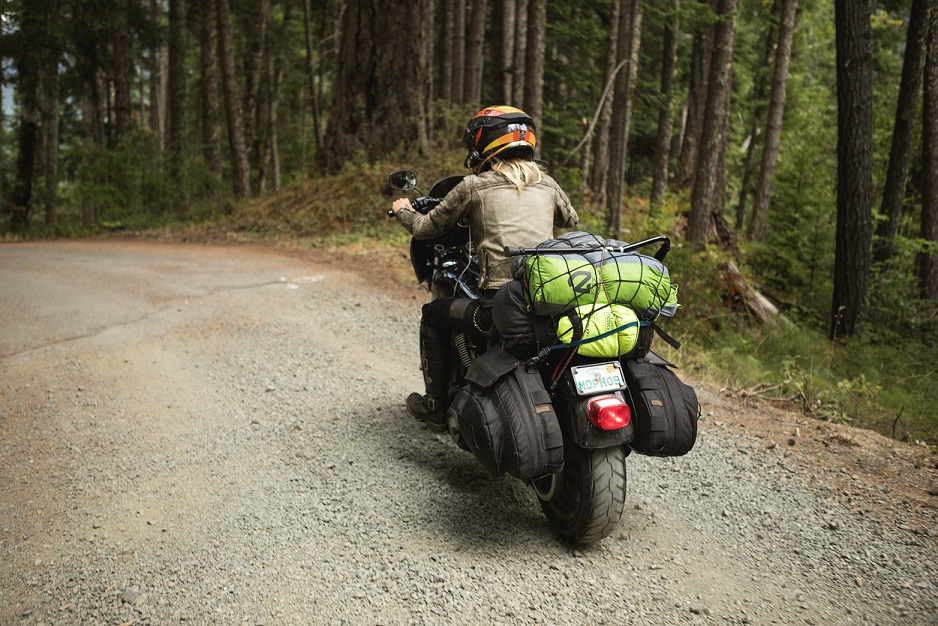 What we had been riding on became a fire road and then a mountain bike trail…I was on a FXDLS and my boyfriend, Preston, was on a Road King. Both way too big to be ridden like dirt bikes. I had a freshly dislocated knee with an ACL tear and shouldn’t even have been riding, period, which is why this was the most challenging terrain I had ridden to date. The forest, which stayed permanently twilight, only added to my feeling of foreboding…if a miscalculation occurred, down the side of the mountain one of us would go. I know you’re not supposed to think of those things, but in some situations it’s impossible and this was one of those. We had to turn back. I no longer had the use of my map, didn’t see a soul in sight or know where the hell I was going. Why am I telling you all this? Because not planning is fun but also dangerous and I want you to understand that before going in. 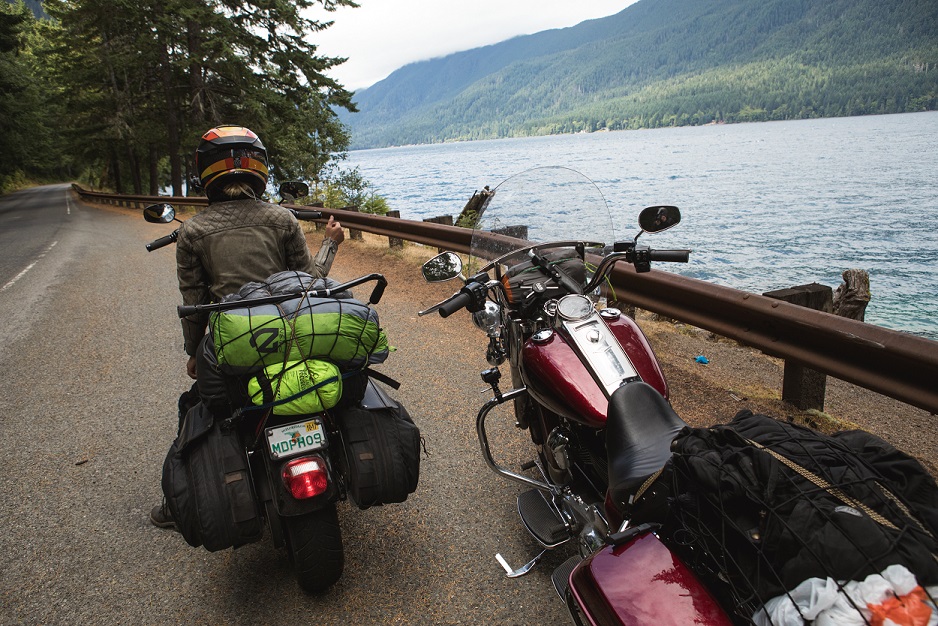 When we made it back to smooth paved roads I felt like I could breathe. As cool and rewarding as it was to ride like that and come out unscathed, it was also something I never want to do again…unless I’m on an adventure bike! 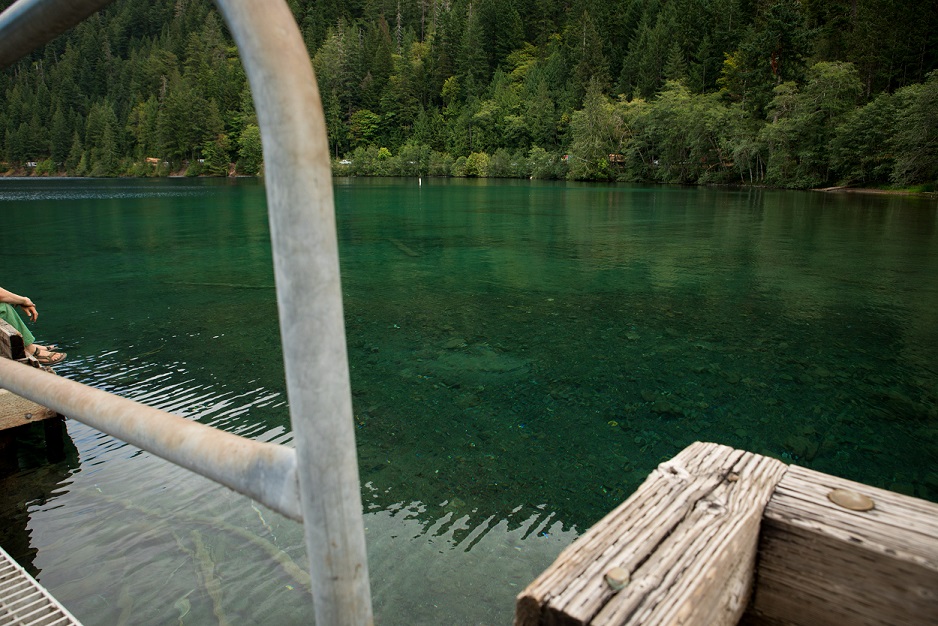 Next up was Lake Crescent. No matter where you enter the park you always go in and come back out onto route 101. Going west a short distance, the 17 miles of lake is easily spotted. Its crystal clear blue waters are due to glacier rocks and a lack of nitrogen which prevents algae from growing. Its maximum depth is 624 feet and you can see almost all the way down it’s so clear. There’s a wide wooden dock that extends out into the water, offering up the perfect place to have a picnic lunch. We decided to stay and bask in the warmth of the sun for a bit since it’s the first time we’d seen it out in this trip to Washington.
Between the lake and a town called Forks, best known from the movie Twilight, there’s a diner called the Hungry Bear Cafe. It couldn’t have come at a better time!  Rain set in as heavy as our appetites and a warm cup of coffee was just the motivation we needed to keep pushing onward. On this route places to eat are few and far between, so make sure to either bring food or stop in for a salmon burger. You’re in the best state to eat it after all! Just keep in mind that the Hungry Bear is a very old-school cafe–service is slow, staff are a little brash and up-front. The place is old, run by old-timers and been that way for years, so impatient visitors aren’t going to change it. Just enjoy the slow pace, good food and warmth. We took our time there to suck up the wifi and better plan the rest of our trip. A break in the rain came and we headed out to Hoh Rainforest (as if we hadn’t gotten enough rain already).  For comparison, Seattle gets 36 inches of rain a year and the Hoh Rainforest gets over 14 FEET of rain annually…which creates a fluorescent, lush green landscape blanketed in a smoky wet fog. Normally you want to explore and hike when it’s nice out,  but this place is best seen in ugly weather when the moss is the most green and alive. Since it’s also known as “the wettest place in America” seeing it in the rain is the easiest thing about this whole trip. 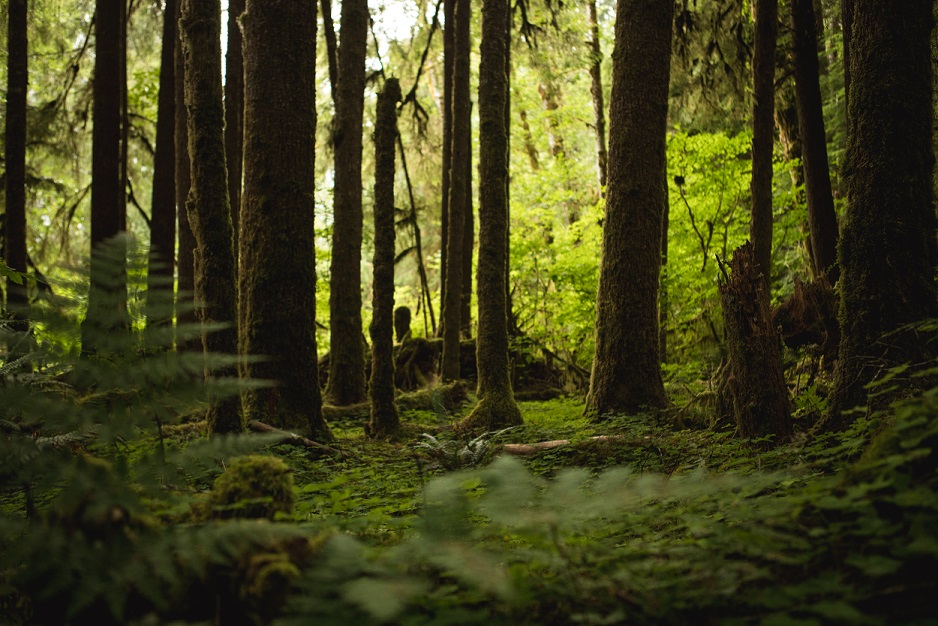 The “Hall of Mosses” trail is only 3/4 mile long and is the next closest thing to feeling like a hobbit on the set of Lord of the Rings. The place is truly magical and one of those locations that cameras will never do justice. Here trees are tied together in a giant unison of moss, above ground roots and fallen trees. Everything tangles together creating one big greenhouse tent of wood and peat. It’s easy to get lost in the moment here, but with the sun setting and darkness coming quick in this part of the country, we decided to head out to our last stop of the day, Ruby Beach. Every few miles, the mood on the coast in Olympic National Park changes; just a few minutes’ walk can transform a flat section of gray sand into a landscape filled with sea stacks, tide pools and whale sightings. Because of this unpredictability, Ruby Beach is where you go when you want to explore like the settlers did, instead of flaunting the latest trends in bikinis. You don’t go here to swim, or sunbathe or even surf. You go here to hike, explore tide pools, watch for birds, seals and otters or catch a glimpse at whales swimming by. You go to Ruby Beach for the same reason you visit Olympic National Park: for the wilderness, the isolation, and the incomparable beauty of the Pacific Northwest. I can’t think of a better way to end a trip like this than a place voted as having the best sunset in America. If you’re feeling adventurous and want to continue on a long haul, you can take 101/PCH all the way down from Washington to Mexico. But if you just have a little more time to explore Olympic National Park, I would check out Hurricane Ridge, a 360-degree view north across the Straits of Juan de Fuca to Victoria, Canada and the southern view of glacier clad Mount Olympus. If you’re still feeling chilled, warming up in Sol Duc Hot Springs is another great way to experience nature–in a little more higher maintenance way.
A few pointers:

Ultimately, you can see things in this park you can’t see anywhere else in the US. The park is huge and though you may not be able to see all of it in your lifetime, with enough vision you can feel like you have.