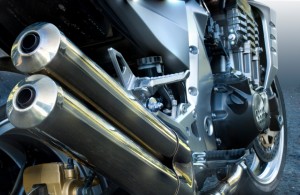 Motorcycle noise is one issue that continues to stir debate within the biking community. Proponents state, “Loud pipes save lives” while opponents, including the noise control coalition, Noise Off, have stated this is a myth and with no studies to prove it. Noise Off points out that noise from a motorcycle’s exhaust system comes from the rear, so it does nothing to alert oncoming drivers of a motorcyclist’s presence.

Yet there are many in the motorcycling community who believe that “loud pipes save lives”. Proponents argue that noisy mufflers continue to alert other drivers, pedestrians, and even animals of their presence on the road. This alone can save lives and help prevent devastating motorcycle accidents from occurring. If another driver begins to drift into your lane unexpectedly, a quick rap on the pipes can alert them to your presence. This is especially helpful in urban settings and in situations where drivers are too busy talking on their cellphones.
At Russ Brown Motorcycle Attorneys®, we understand the issues facing motorcyclists everywhere—and we want to know what you think. Do loud pipes save lives or do you believe mufflers should be silenced? Make your voice heard!