Gevin Fax Blazes Her Own Trail

Whether riding a motorcycle or challenging norms, Gevin Fax is no stranger to blazing trails.

This lifelong lover of two wheels grew up in Los Angeles in the 1960s, a decade marked by civil rights uprisings and antiwar protests. Fax’s parents sought to give her and her siblings a leg up and a foot out the door so the kids could achieve the life they aspired to, even if the social representation wasn’t there.

“We were actually very poor,” Fax recalls. “We didn’t have anything but a lot of hand-me-downs. We really weren’t able to get new clothes. We had old bicycles. But my father and my mother were insistent on making sure that we were exposed to things that most African American children were not exposed to.”

From a young age, Fax found herself the odd one out in most extracurricular activities. Her skin tone aside, she was a tomboy and often the only girl. She’s used to surprising people. Case in point: Her first experience behind the handlebars was a minibike race against a bunch of boys. Fax was 8. She learned the basics of the bike only minutes before approaching the starting line.

And she won her race.

“That was the beginning of the end,” Fax says, laughing. 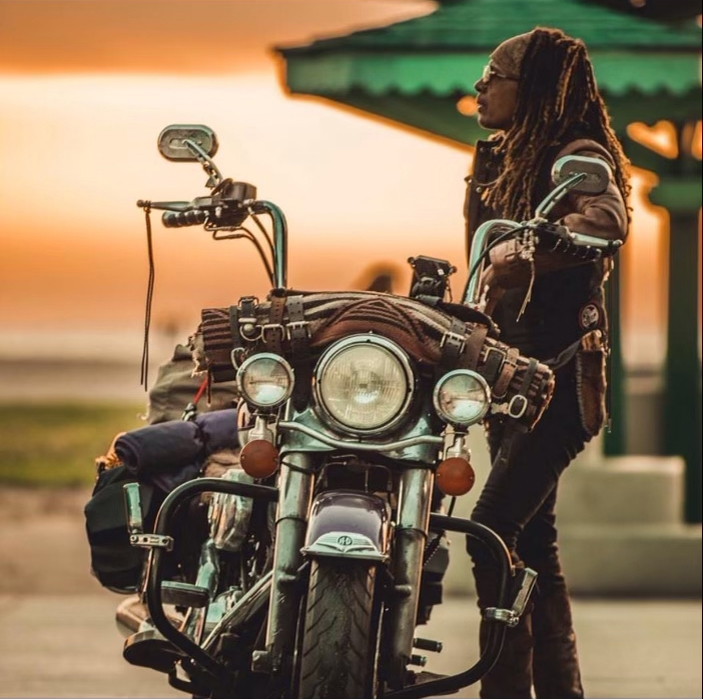 When she was 13, her family moved to a small town in Ohio. A city slicker, born and raised, Fax was invigorated by the wide-open spaces and the chance to get lost in the landscape with her younger brother riding on the back of her dirt bike. They chased down long, rural roads and returned home with more than a few skinned knees. That’s where she finally figured out how to work a clutch. That’s where she came into her own as a rider.

Her first vehicle had been a moped at age 10 while living in Los Angeles. Then she upgraded to the 175 Honda dirt bike. With Ohio highways summoning Fax like a siren song, she needed something with more power.

In the early ’80s, Fax felt like she joined new ranks with the purchase of her first Harley, a 1980 Shovelhead. She and her girlfriend at the time drove five hours south to Kentucky to get it. 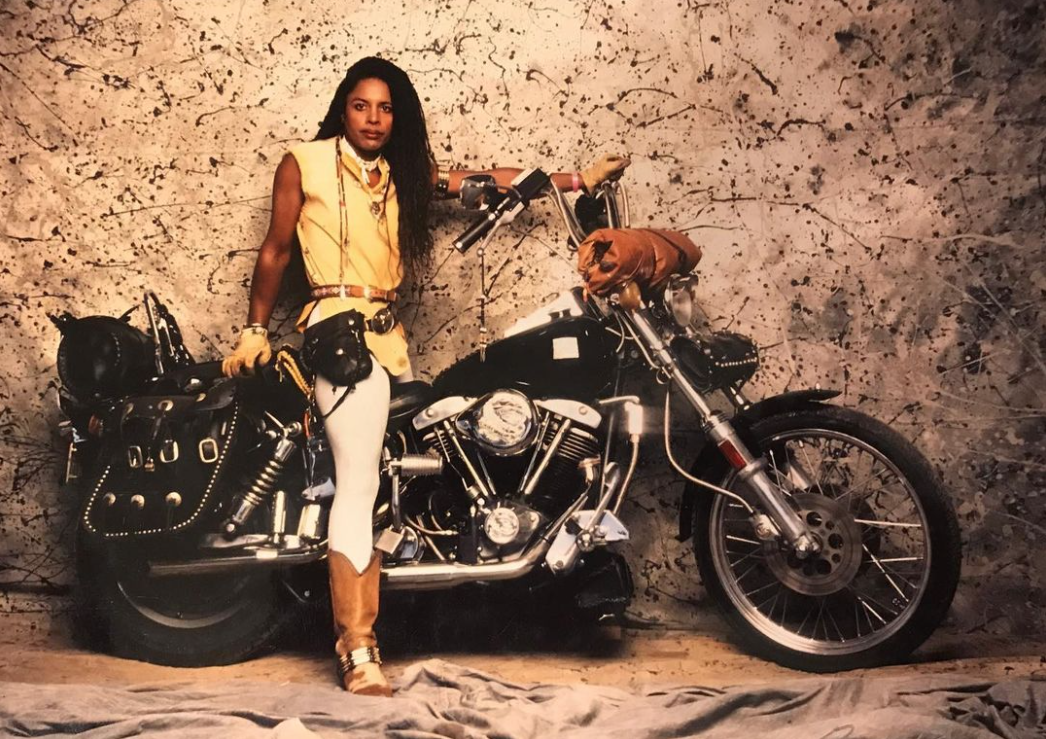 Fax poses on her 1980 Harley-Davidson Shovelhead, which she has since rebuilt. (Photograph courtesy of Gevin Fax)

“I rode that bike all the way back from Hazard County, Kentucky, to the little town in Ohio that I lived in,” Fax says. “Everybody kept telling me my life was going to change after I bought the Harley. Let me tell you something: Everything changed. Being a female on a big V-twin, alone, I think was astounding enough. The fact that I was an African American female on the bike made it an even sweeter deal — it was like the circus came to town …

“That motorcycle opened up more doors than I ever could have imagined.”

Today, Fax’s daily rider is a 2001 Harley-Davidson Road King Classic. She also owns a 1995 Honda XR250R dirt bike and a 1999 Sportster 883 Hugger that she turned into a bobber “for banging around town.” She’s currently rebuilding the Shovelhead.

“I chopped off the swingarm, and I turned it into a rigid frame,” she shares. “I rebuilt the engine to a conservative 91 inch. I’m in the process of rebuilding the transmission right now. We’re putting the frame together, welding, and getting it ready for powder coating.”

Fax’s unabashed drive to reach for her dreams (and beyond) has led to a life packed with accolades that include appearing on the covers of biker magazines; starring in documentary films (Biker Women and The Litas); performing bass with the band Klymaxx on MTV and Soul Train, and becoming an entry point to motorcycling for so many other women riders around the globe. Earlier this year, she was invited by Polaris to join the company’s new Empowersports Women’s Riding Council, which was formed to increase representation, inclusion, and participation of women in Powersports. She currently resides in Los Angeles with her partner of 25 years, has a master’s degree in education, and works as a K-12 teacher. In light of Covid, she now teaches physical education online, concentrating her instruction on basic survival skills, health, safety, and teamwork until group activities are permissible again.

We caught up with Fax to find out more about what compels her to choose two wheels and live life in the wind. 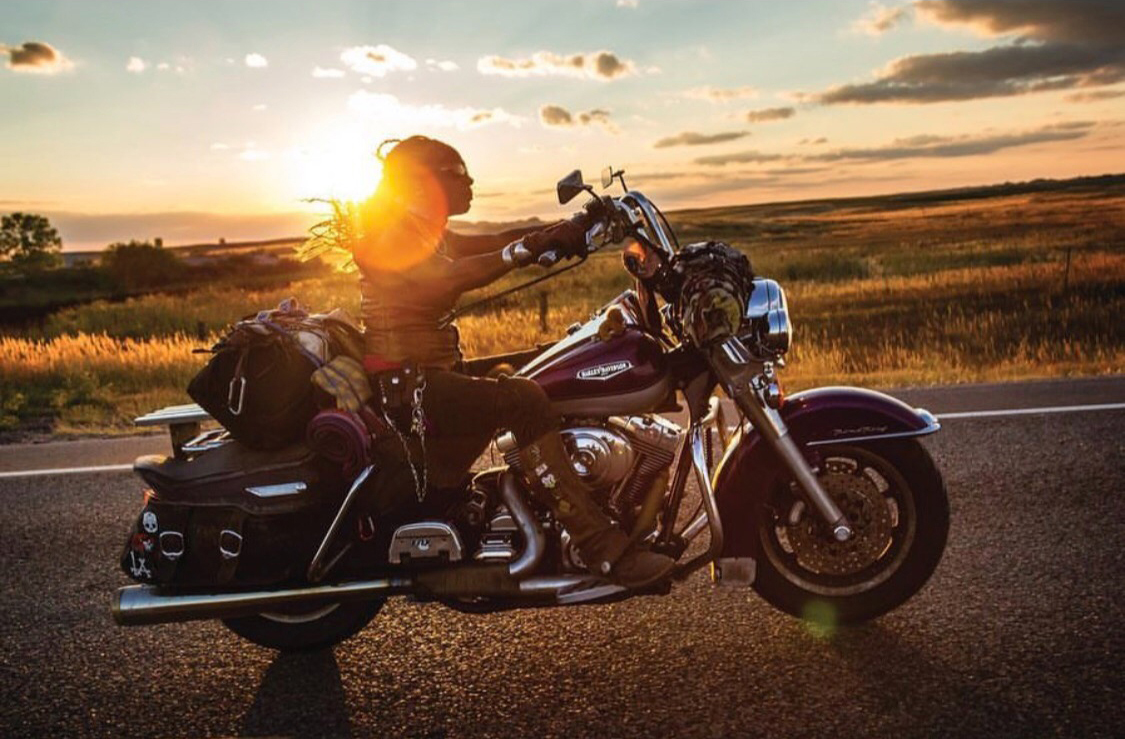 What was your first bike?

I started riding when I was 8, but I didn’t get a “motorcycle” until I was 10. My dad had his own company as a painter and decorator, and he was working for Philip Fowler, who owned Southern Comfort Whiskey at the time. He was on a job, and Philip was giving him a walk-through. My dad happened to see this moped — basically a motorbike — in Philip’s garage.

Philip says, “We imported that from Italy five years ago. It’s been sitting in the garage since. If your daughter can get it running, you can have it.”

My dad brought it home on my birthday. Honestly, I didn’t know what to do with it, and I didn’t know how to work on it. So, I got a guy down the street who worked on lawnmower engines, and we worked for hours. By the third day, we got it running. I pulled the carburetor apart; pulled the engine apart; cleaned it all up; pulled the gas tank off; cleaned it out; realized it was a two-stroke, so we had to mix gas and oil; and finally, we got it going. Frankenstein was alive!

You’ve said motorcycles opened up new doors for your career. How so?

There were not many African American women on motorcycles, and even if they were, they certainly were not on Harleys. I became kind of a unicorn. It got me seen — for the first time, people were actually seeing me instead of me being invisible.

I ended up gracing the covers of American Motor Scene magazine, Harley Women, Girl Guide, and Black Rider. In doing those covers, I landed a few more modeling jobs, a few more commercials. I appeared in Biker Women, a documentary that was aired on the Discovery Channel. Within one week, it went international … All of us were on billboards. We were on the sides of buses. This was the biggest thing any of us had ever done, and it literally blew my head off my shoulders. 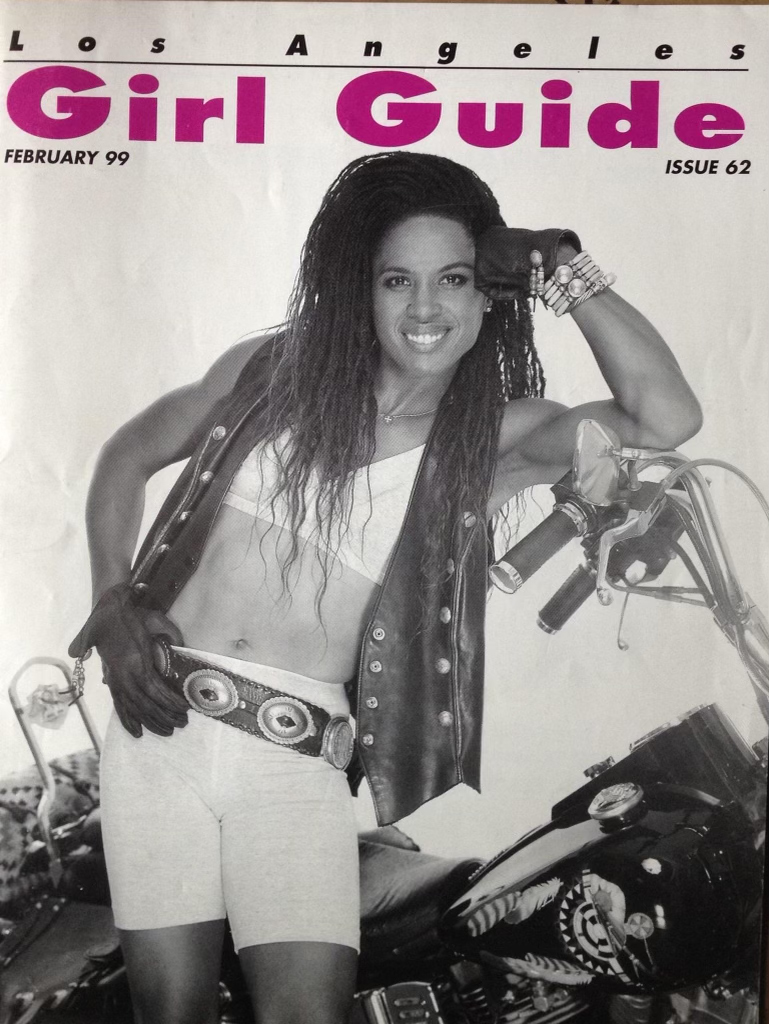 How do you hope to inspire other women through your endeavors?

I think this is the best, most wonderful country in the world, but we are not flawless. I want women to not sell themselves short. We are stronger than we give ourselves credit for. We are more possible than we could ever imagine. 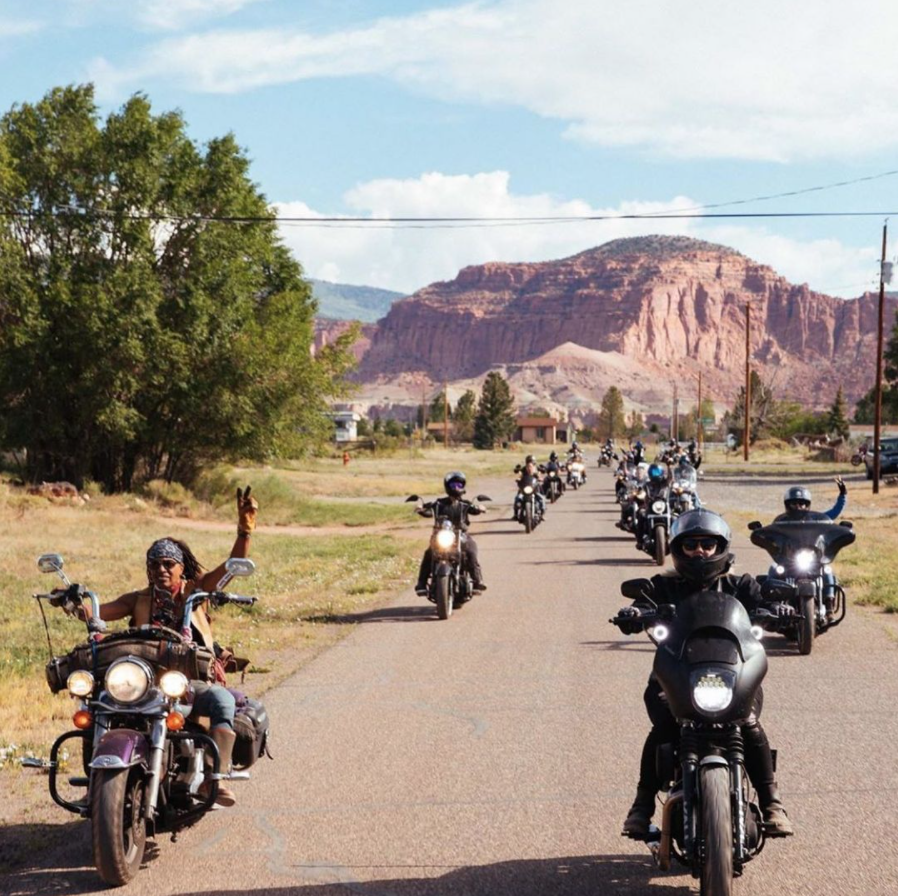 I call it a circle of love or a circle of safety. Before I take off on my motorcycle, I walk around my bike very slowly, and I check everything on it to make sure everything’s good before I get out on the road. It’s also a form of meditation and prayer.

Where would you love to ride to next?

The best thing about living life in the wind?

Honestly, I can’t breathe unless I can ride. I didn’t realize how much of a release it is for me until I was injured at one point and couldn’t ride for a while. I almost went crazy — at least, that’s what it felt like. Heaven forbid I become blind because that would be the worst. I would have to hire somebody to drive me around in a sidecar.

Somebody said to me, “Well, now that you’re getting older, do you think that you may not ride anymore?”

I’ll stop riding when they throw dirt in my face. 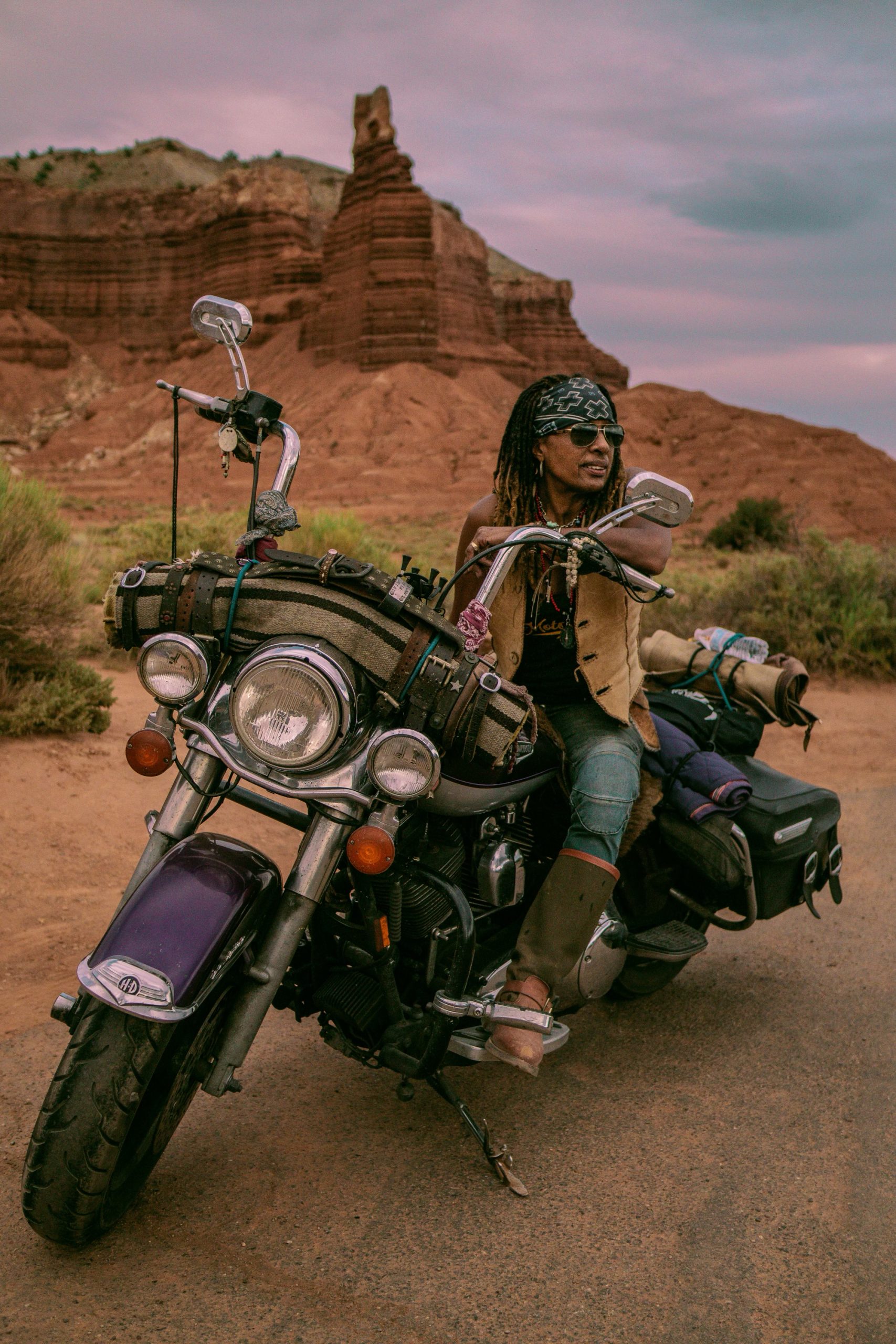