Harley Davidson and the Art of Survival! 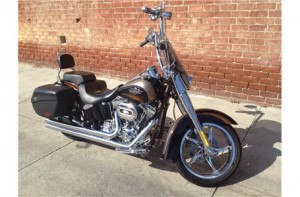 Russ Brown Motorcycle Attorneys®; The rich legacy of the Harley Davidson Motorcycle is considered, by many motorcycle historians, as a company who started out on the road from nowhere to the leader of motorcycle technology and style. And while that road has been hard paved with the ups and downs with the company dealing with tough economic patches, two world wars, and a smattering of social change, they have still emerged as one of the world’s authorities on motorcycle design and style.
From Harley’s meager beginnings in 1903 the idea of a motorized bicycle was considered by the rich and affluent to be nothing more than a novelty, but because of its small price tag it was found both popular and useful by the working class who sought affordable transportation for personal and business needs.
As the years went by the Harley Davidson motorcycle earned a place in American culture and almost overnight a new social lifestyle was growing nearly as quick as the new Harley Davidson models were being introduced to the public. In 1914 when the U.S. entered World War I, the Harley Davidson motorcycle served its country with over 15,000 Harley Motorcycles being sent to the U.S. military.
By the end of World War I the image of the Harley motorcycle was viewed as more than a motorcycle by the American public. These hard working service vehicles became more popular and helped spur the company’s growth.
With Harley’s constant improvements in its motorcycle design the doors to new markets have opened. Already considered a lifestyle choice by a select breed of adventuress men and women who push the envelope, have helped Harley Davidson fine tune the motorcycle while unknowingly promoting this new lifestyle to those they came in contact with.
The Harley Davidson Company continued to grow and prosper; with markets firmly established within the Military and law enforcement as well as the general public, owning a Harley was becoming as popular as ever. In 1929 the great depression shook the U.S. economy and ravaged the stability of America. As sales rapidly diminished Harley Davidson tightened its corporate belt and settled in to ride out the financial devastation that was reeking havoc on the U.S., relying on its military and law enforcement sales the company squeaked by.
As the American economy began to stabilize in the mid 1930’s those who made it through the depression breathed a sigh of relief and carried on. The Harley Davidson Company strengthened its resolve and pushed on introducing newer designs with fresh innovation.
As the years rolled on the Harley Davidson motorcycle found popularity as symbol of both patriotic service during WWII and as the vehicle of choice by outlaw rebels as depicted in Hollywood motion pictures. As social outlook and acceptance began to change the Harley Davidson motorcycle has remained the most popular choice by those who live the biker lifestyle and those drawn in by the allure and mystic of Harley’s one of kind look, feel and sound. Throughout its rich life the Harley Davidson has perfected both the art of motorcycle technology and survival!
To check out the latest in Harley Davidson check visit our friends at Glendale Harley. They have the latest and greatest in all things Harley Davidson and home to the Love Ride, one of California’s premier motorcycle events. Russ Brown Motorcycle Attorneys® are proud to be the official attorney sponsor of Love Ride 29 and look forward to seeing many of our fellow riders and BAM members there.