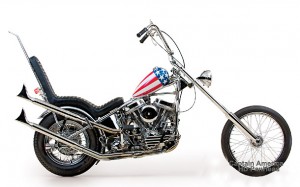 Timeless and iconic, the 1969 Easy Rider movie carved it way into history and is revered as a classic film with a significant representation of the counterculture movement. Produced by Peter Fonda and directed by Dennis Hopper the American road tale’s portrayal of hippy ideals and anti –establishment rebellion was enhanced by the customized Harley Davidson motorcycles, with the Captain American Harley-Davidson Panhead becoming a cultural icon on two wheels.
The Captain America epitomizes the chopper genre with the bare-bones customization becoming a legend in motorcycle history. The raked, chopped ridged machine brought choppers to mainstream culture and is arguably the most recognizable motorcycle of all time. 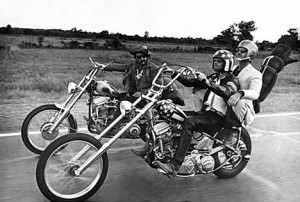 The movie bikes were purchased from a police auction for $500.00 each. The retired LAPD Harley-Davidson FLs were slated to become two of each style bike for the movie. One would be transformed into the Captain America machine, a backup Captain America bike and the other two went on to become known as the “Billy Bike” ridden by co-star Dennis Hopper.
Following the vision of Peter Fonda, custom bike builders Cliff Vaugns and Ben Hardy modified the bikes not knowing the historical impact they would create with the 1200cc chromed V-twin engine, 45 degree rake, front end that was extended 12” over stock, ape hangers, upswept sissy bar, custom tank, fishtails and a paint job that would be replicated for years to come.
Hollywood stuntmen Tex Hall and actor Dan Haggerty (Grizzly Adams) were in charge of handling and maintaining the four Panheads with one Captain America bike destroyed in the final scene. The other Captain America bike and the two Billy bikes were stolen from a warehouse in the Los Angeles area right before filming concluded, never to be recovered. Like a Hollywood mystery movie the wreckage of the motorcycle destroyed in the final scene remains a topic and debatable subject of much speculation. Rumor has it that the original bike that was demolished in the final scene was gifted to Dan Haggerty. It’s said that Haggerty restored and sold the bike, however the authenticity of the restoration remains a controversial topic that can go on until the end of time. Nonetheless, there is no disputing the impact of the customized Harley Davidson Panhead motorcycle which will forever be held in the hearts of motorcyclists and those in mainstream culture.


Russ Brown Motorcycle Attorneys® have been fighting for fellow riders for over thirty-five years.  Motorcycle Lawyer Russ Brown created and continues to sponsor BAM, free emergency breakdown and legal assistance for motorcycle riders.  A great free program that offers riders a friendly voice to call 24-7 if they are stranded on the road and or need legal assistance – especially in regards to being injured in a motorcycle accident.  If you or a loved one has been hurt in a motorcycle accident call Russ Brown Motorcycle Attorneys®.  1-800-424-5377.  Nationwide – from New York to California, Nevada to Arizona, Florida to Ohio, Minnesota to Washington, South Carolina to Colorado – regardless of where you ride we have a top motorcycle accident lawyer to help you.