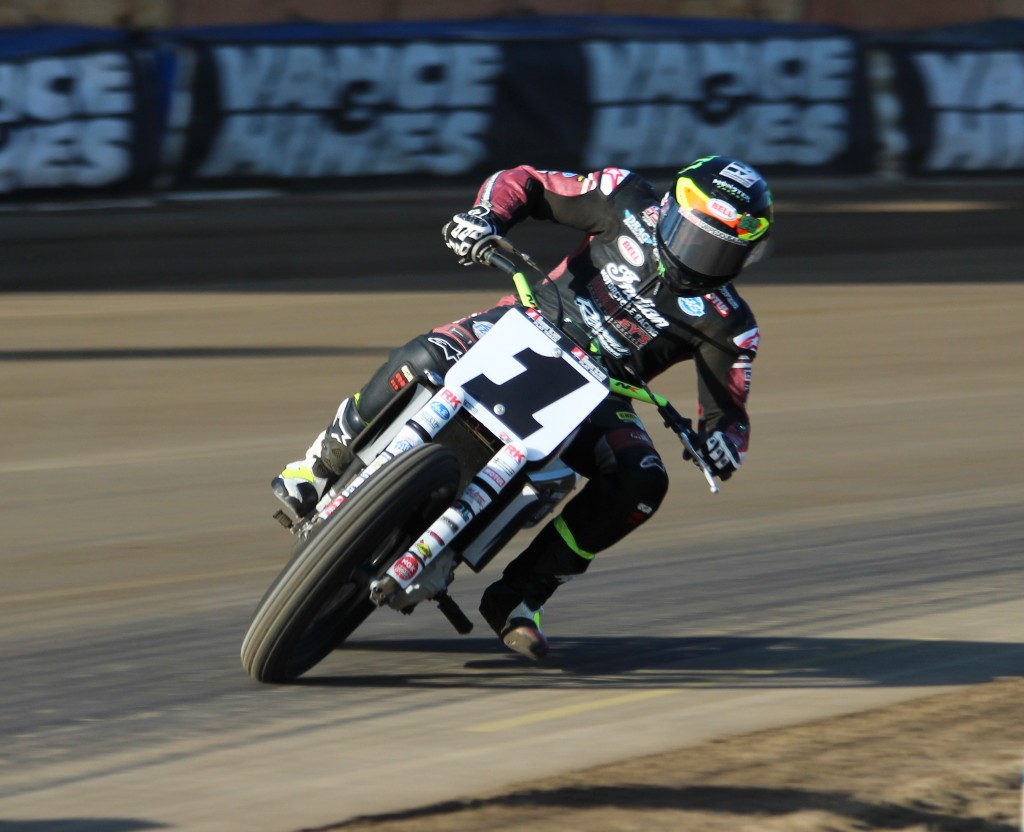 Indian Motorcycle and Jared Mees have proven themselves an unstoppable force in American Flat Track. The reigning champion has bested all comers so far and last weekend at the Sacramento Mile, Indian swept the front row in qualifying and took the top seven spots in the 25-lap main event.
In fact, Mees has now won every race so far this season (though he was disqualified post-race from Round 2 for an illegally modified tire), a season that has already featured all four of the course types encountered on the calendar: short track, half-mile, one-mile, and the season opening TT event in Florida (TT courses must include at least one jump and one right turn). So who can stop him? 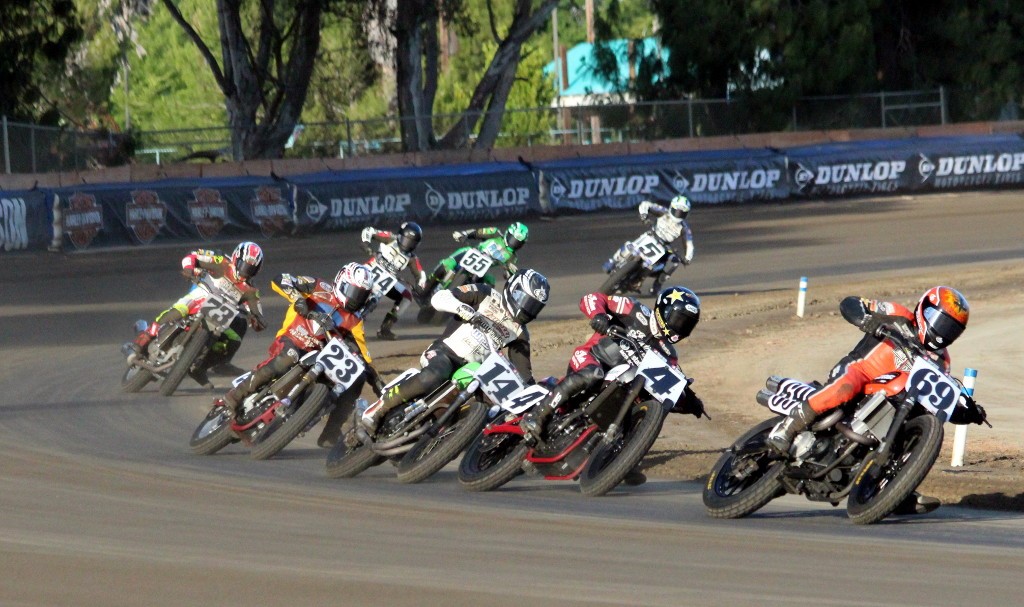 At the beginning of this year all eyes were on Mees’ Indian teammate Bryan Smith, who beat him to the championship in 2016. A crash and subsequent broken leg put Smith out for three weeks, missing two races and sending him to Sacramento still recovering. Interestingly, the challenge to Mees so far has been from privateer teams, who have been purchasing Indian’s FTR750 directly and rounding up what sponsorship they can. At Sacramento it was Jeffrey Carver and Kenny Coolbeth Jr. who applied the pressure, at least early on. Flat track has traditionally been a place where a well-funded private team can challenge all comers, so it’s nice to see this tradition still alive and well. 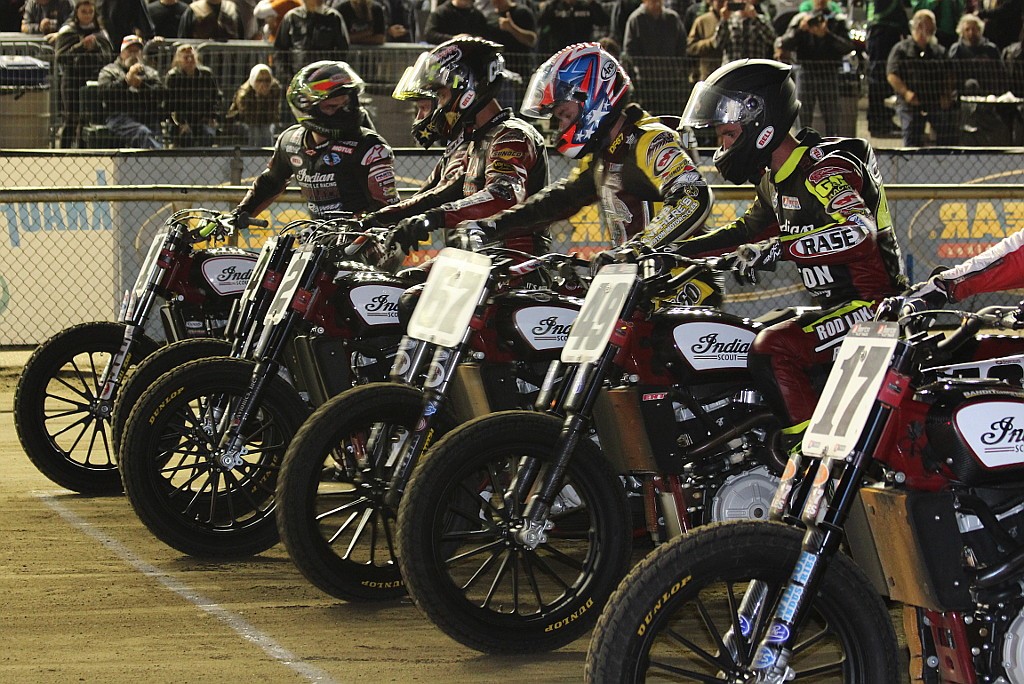 Indian was no doubt pleased with the front row at Sacramento not to mention having the top-seven spots go to Indian mounted riders. The only chink in their armor was seeing two privateer FTR750’s grenade their engines, one of them while leading. Photo: Johnny Killmore

The Sacramento Mile in particular calls back to that bygone slice of Americana that so many people wax poetically about. It takes place at Cal Expo in conjunction with the county fair, with the outside steel fence of the horse racing track covered with hay bales and plywood. But just as race bikes are starting to wear more carbon fiber, the corners have modern air fence in front of the hay bales as well. Not all progress is a bad thing.
Fortunately, no one tested the barriers this weekend and the course provided a smooth and consistent surface all night, especially after the bumpy and dusty conditions racers had to battle in Arizona the week prior. The stands were packed like I hadn’t seen in years, but many people came later in the day to catch the races. They ended up missing quite a bit.
Before the event even began there was hooligan racing Friday night in nearby Rancho Cordova. People on heavy street bikes battling each other on a tight track? What could go wrong? Nothing if you’re a spectator.
But at the track Saturday there was a vintage invitational race that brought out about a half-dozen gorgeous machines, ranging from pre-war bikes with hand-shifters and no rear suspension up to 1950’s-era Knucklehead Harleys. There was also a vendor area which, though sparse compared to years past, still managed an excellent meet-and-greet with several flat track legends. It was a chance to hear war stories from racers who ran on tracks that have long been paved over for housing developments. Combining these stories with the sound of vintage thunder was a rare treat. The Vintage Invitational brought about a half-dozen machines out from different eras, letting fans see and hear the bygone days, alive in all their glory. Photo: Johnny Killmore 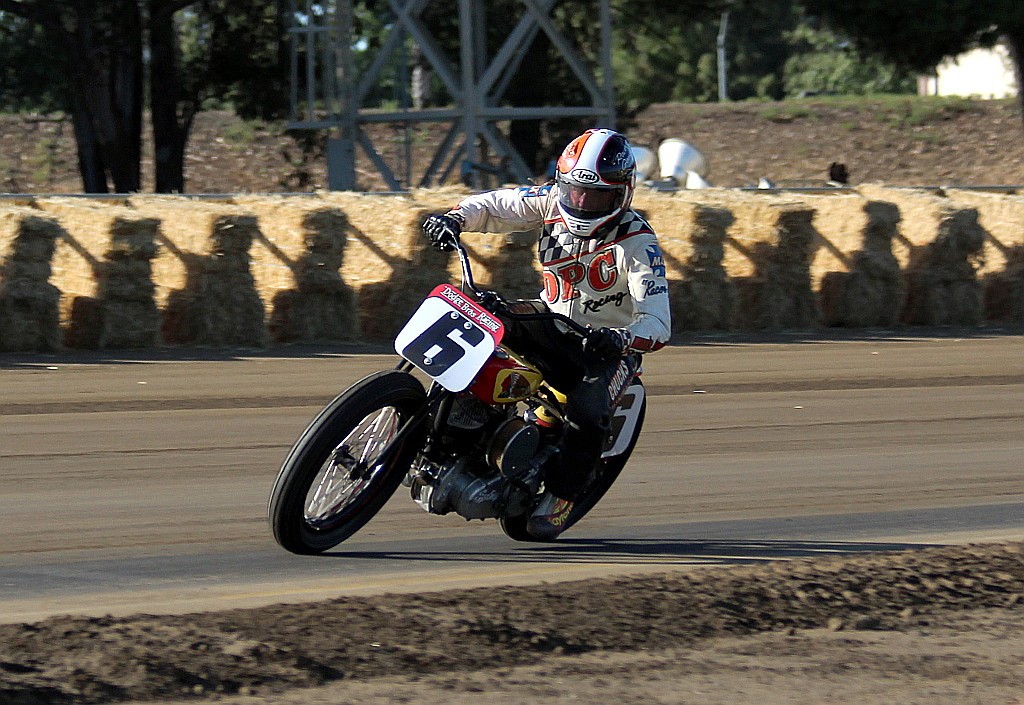 Indians, Harley-Davidson’s, and Triumphs were among the field for the Vintage Invitational. George Willis (#6) won the race on his Dodge Brothers-sponsored Indian. Photo: Johnny Killmore Much like in the old days, several bikes ran into tuning issues. Here Roy Taboada II  (#27T) re-enters the track after losing power. The bike stuttered along and he held on for 4th.Photo: Johnny Killmore

In between races there was an autograph session where fans could cross to the infield paddock to meet riders and see the bikes up close. It was great to see the area crowded with fans and I noticed a major uptick in the elusive 20-something motorcycle enthusiast that everyone in the industry is struggling to find.
With flat track having an old-school vibe while also being featured in the X-Games, it’s a great place to find everyone from college kids to grandpa’s, all grabbing an overpriced hot dog and beer. Speaking of beer, 805 Brewery ran an afterparty as well, which was a great chance to recap the night’s exploits and wait out the fairground traffic jam. 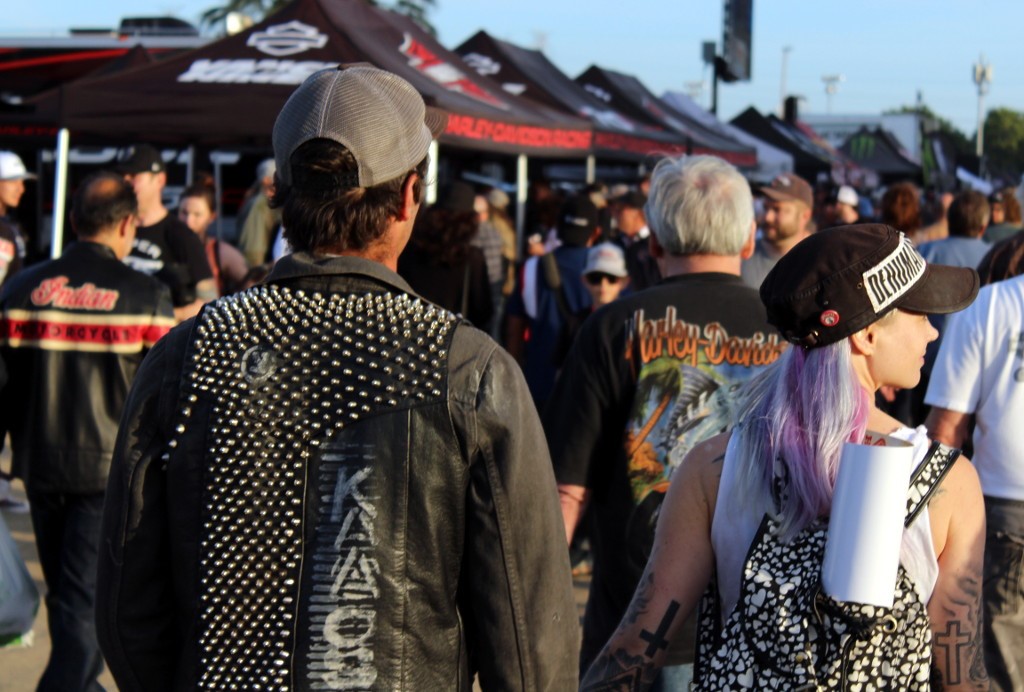 The paddock are for the vintage bikes was a mix of gray hair and purple hair. Old bikes bring everyone to the yard. Photo: Johnny Killmore

But everyone came to see racing, and racing is what they got. Jared Mees won his heat race and was fast qualifier for the 25-lap main event, so it surprised many to see Jeffrey Carver jump to the lead and begin creating a gap. But Carver has been at the front most of the year, riding an old XR750 Harley as well as the new Indian FTR750 to multiple podiums. Despite the early speed, Carver’s race literally went up in smoke when the Indian’s motor lost power on the way to turn 1. This handed the lead to none other than Kenny Coolbeth Jr. The three-time national champ moved from the Vance & Hines Harley-Davidson last year to Nila Racing, a privateer team using the Indian FTR750. Despite being new to the bike Coolbeth was on fire and cleared the field with the exception of Jared Mees, who began to run Coolbeth down.
A back-and-forth battle at 135mph began. With a very narrow blue groove of rubber laid down, the racing line called for inch-perfect positioning and micro-second timing in order to make a pass stick, but within a few laps Mees took the lead and opened a slight gap. 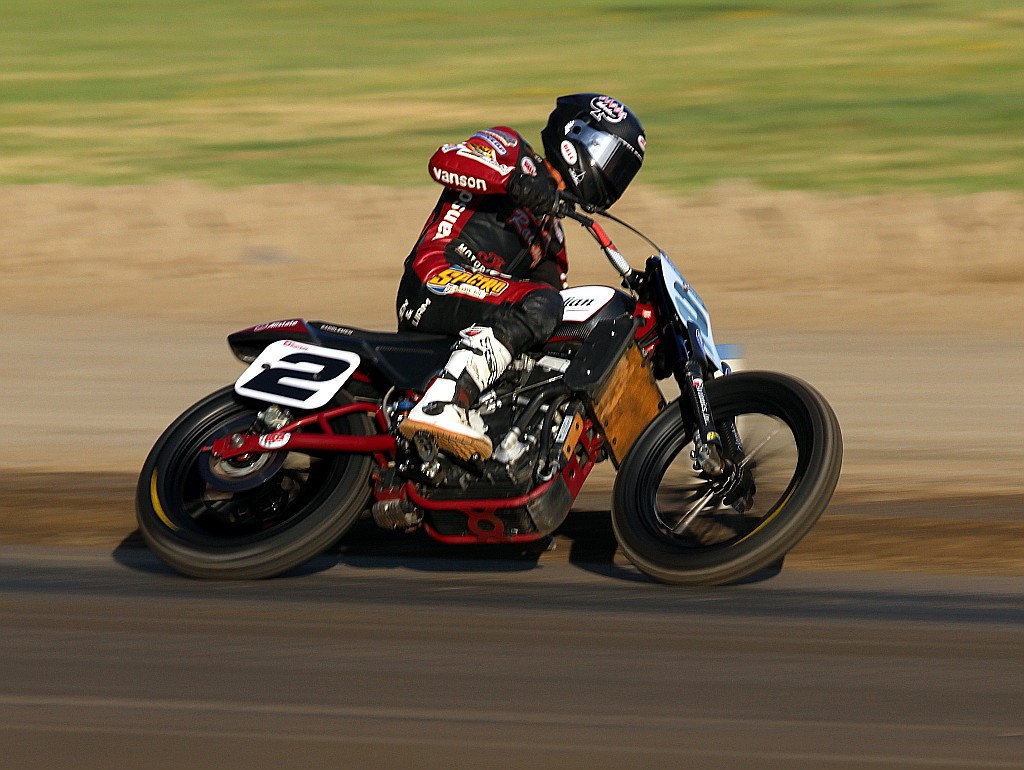 Mees’ tire began to fall off though and he came back under pressure with less than 10-laps to go. The pressure Coolbeth was putting on the leader also allowed Bryan Smith a chance to close in from 3rd place. Smith got a terrible start and spent the first half of the race battling in a five-bike group. By the time he got to 3rd there was nearly a full straightaway gap to the leaders, but instead of settling, Smith began a slow charge that saw him visibly gaining on the lead duo.
At this point it was a guess as to whether Coolbeth was biding his time for a last-turn pass or if he was giving it all he had just to stay with Mees. When Smith joined the lead pack the smart move for Coolbeth would have been making his move right away, avoiding any chance of being passed by Smith. Instead, the three bikes ran in lock-step for the final 4 laps, going three-wide on the final run to the checkers. Jared Mees (#1) and Kenny Coolbeth Jr. (#2) pushed each other for most of the race. Photo: Johnny Killmore

Mees held off the attack by a meager 0.018 second, leaving Coolbeth in second and Bryan Smith another 0.234 seconds back from Coolbeth. That’s your entire podium, covered by a quarter of a second. The finish rightly earned a standing cheer (more like a roar) from the grandstands. 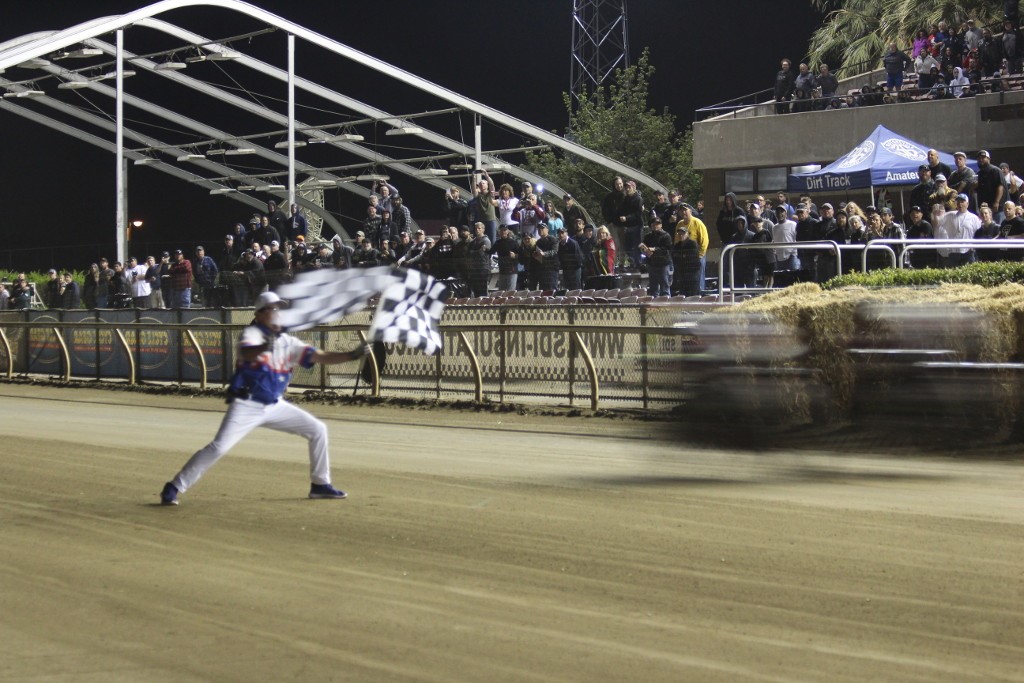 Want to see what 0.018 seconds looks like at 135mph? Me too, but you can’t run a camera’s shutter speed fast enough to catch in at night. Blur one beats blur 2 under the lights at Sacramento. Photo: Johnny Killmore

But despite the closeness of it, Mees has continued his dominance. Bryan Smith’s eight-in-a-row streak at Sacramento has finally been broken, but it took a broken femur to slow down the “Mile Master.” He proved his pace by recovering from a bad start and running down the lead pair in the waning laps. With five of the next six events being mile races, perhaps Smith can be the first to break Mees’ stride this year?
May 26th will feature the famous Springfield TT, but only the Singles class will be there. This leaves the Springfield Mile on May 27th as the next time we will see the Twins in action. In 2017 Bryan Smith managed a 0.005 second win over Jared Mees and the famous oval’s unique, wide-radius turns make passing both into and out of the corners much easier than at Sacramento. A win at the Illinois track is also highly prized by flat trackers. With the clay oval hosting motor-racing events since 1910, the track has a storied history in both car and motorcycle sport.
If not there, then racers have three Mile events in June to take a shot at dethroning Mees. Jeffrey Carver Jr. has been close several times and must be hungry for his first win in the series. Smith will be looking to reestablish himself as the leading contender for the top spot, and Kenny Coolbeth Jr. is as motivated as any time in his career to put more wins under his steel shoe. Check the full schedule here and be sure to catch a race in person. Also remember the entire series is being broadcast on NBCSN with a one-week delay and a live webcast of every event is available for free streaming at Fanschoice.tv. Let’s not forget the Singles class, where defending champ Kolby Carlile, “The Flying Tomato,” took on all comers for the win. Photo: Johnny Killmore 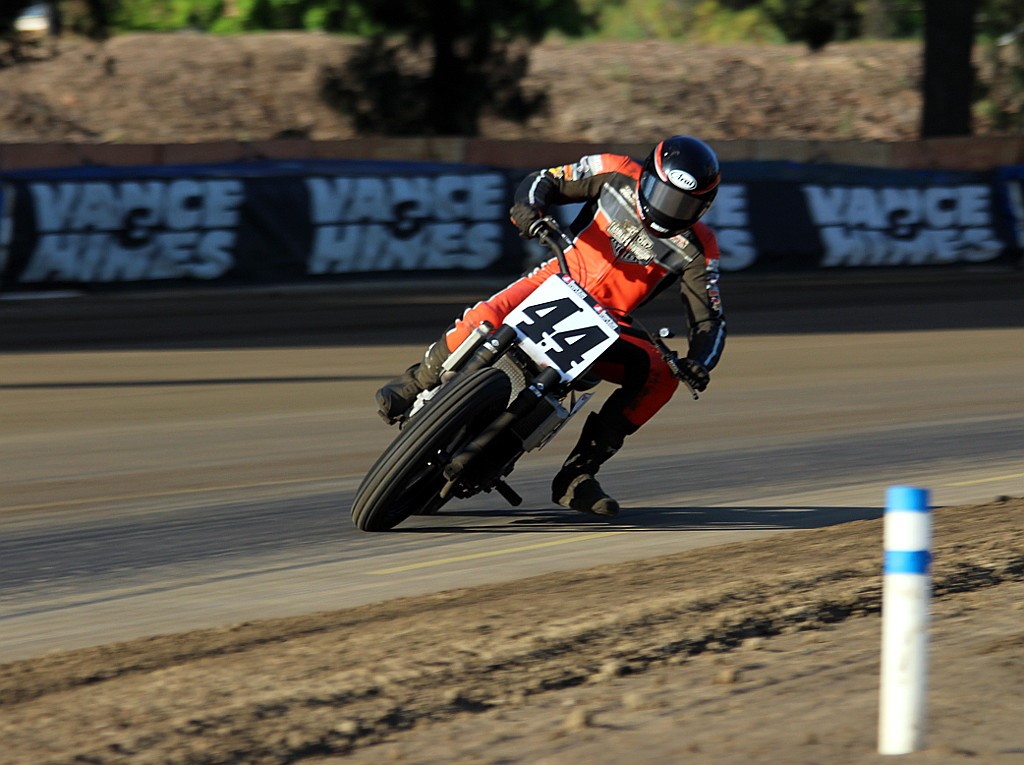