Jody Perewitz Packing Plenty of Talent Stands On Her Own 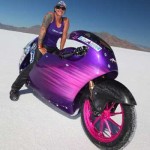 Motorcycle Lawyer Russ Brown: You can often find Jody Perewitz on a horse – a four-legged one with a mane and a tail, or an iron horse. The talented daughter of a famous father is an award-winning equestrian — when she’s not riding a cycle or driving a company.
This acorn didn’t fall far from the tree. Perewitz is a famous name – Jody’s father is Dave Perewitz, known for his amazing “Art in Motion” cycles – and Jody packs plenty of skills and talents of her own. She not only builds motorcycles — for example, her own 1963 Harley Davidson Panhead – she also built the Perewitz company into a major and recognizable name brand. The motorcycle industry respects the successes she’s achieved through her marketing genius. The Perewitz team is led by Dave, who makes hundreds of celebrity appearances every year; Jody is the marketing force who books the trade shows and designs all of the Perewitz merchandise, and keeps the company’s image exciting, consistent and out in front of people.
Jody organizes the “Perewitz Bike Nights” during the summer season, and the events draw hundreds of motorcyclists to their shop in Bridgewater, Massachusetts. The Blessing of the Bikes was in May, but July is when you can roll in for the Chili Throw-down! Jody is powerful and knowledgeable in reality and in virtual reality: she’s been building bikes for years, and she’s the Webmaster of the Perewitz Cycle Fabrication website. The company’s site provides almost as much visual excitement as a ride on one of their bikes. More than just wheels, pipes, a seat and a mirror, the custom-fabricated motorcycles combine design, performance, power, engineering, and creativity.
No question, it’s a talented family, and Jody learned at her father’s knee, but she also shines a lot of her own genius beyond her famous father’s shadow. She set a land-speed record last fall at the Bonneville Salt Flats, becoming the first woman to break the 200-mph barrier on an American V-Twin. She also set another world record there last August: Jody and her machine topped more than 200 mph for more than a mile. She grew up around her dad’s motorcycle business, and got her work ethic from watching her dad for decades in the shop at their house. It’s no surprise that she’s earned a degree in Political Science, and has taken up painting. She’s not merely the marketing mind behind the Perewitz team, (Team J’Witz Facebook page) she’s grown to be more than “Dave’s daughter.” Jody is carrying on the family tradition of one-of-a-kind, hand-built choppers that are as comfortable and reliable as they are beautiful – and she’s doing it at record speeds!
As Jody continues to set records and pave her own way in the motorcycle industry she establishes a new road for the rest of us to venture upon. Please join this year’s annual Sturgis Buffalo Chip’s Biker Belles ride and charity event and share with us your inspirations and new roads. The Biker Belles celebration takes place on Wednesday August 8th during the Sturgis Rally. It is a day of Real Women Real Stories and Real Fun. To find out more please visit www.bikerbelles.com or call 605-347-9000. 100% of rider’s contributions go directly to the charities supporting preservation of women’s history in motorcycling, and empowering women and young girls into their futures.
Russ Brown Motorcycle Attorneys® are a proud sponsor of the Biker Belles Ride and looking forward to an exciting Sturgis Rally this August.