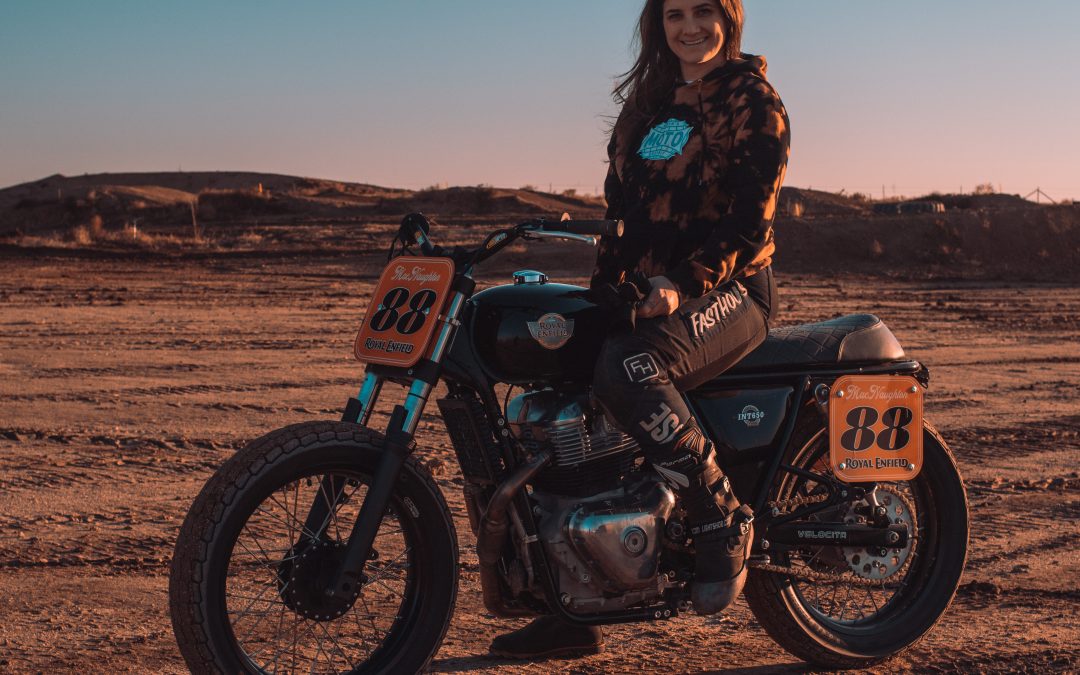 I have known Lana MacNaughton longer than any other woman in the motorcycle industry. She is an OG when it comes to showing the world how women can ride bikes. Lana is the creator of the Women’s Moto Exhibit – an online and traveling exhibit of photos primarily focused on women riding motorcycles.

When I first got into motorcycles, it was Lanas work that inspired my style, what bikes I liked and who I wanted to meet to ride with. She started posting on Instagram right when the app was created and was one of the first people showcasing women on motorcycles in this degree – professional photos, all shapes, sizes and styles of women and all styles of bikes. She also embodied the vibe of women having real, independent fun on their own bikes. When the first and second Babes Ride Out events were just happening, Lana was there with her camera capturing moments that have stuck in my head ever since. You might recognize this one: 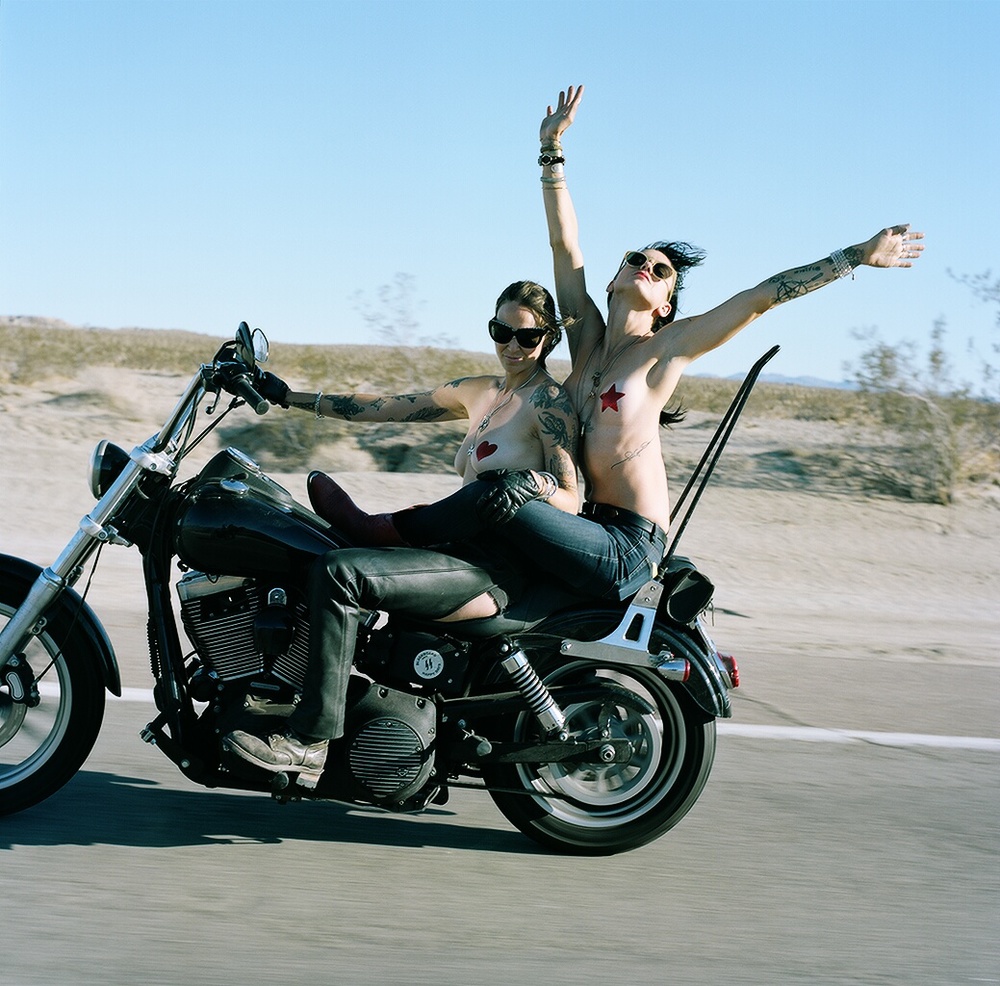 One of Lana’s first iconic images

When Lana came to my hometown to have an exhibit I jumped on it. I showed up and helped them sell merchandise at the event and then helped them make a route for all the women to ride around town. By the end of the day, Lana and I had become friends and decided to create an all-women’s motorcycle event together – which later became The Dream Roll. 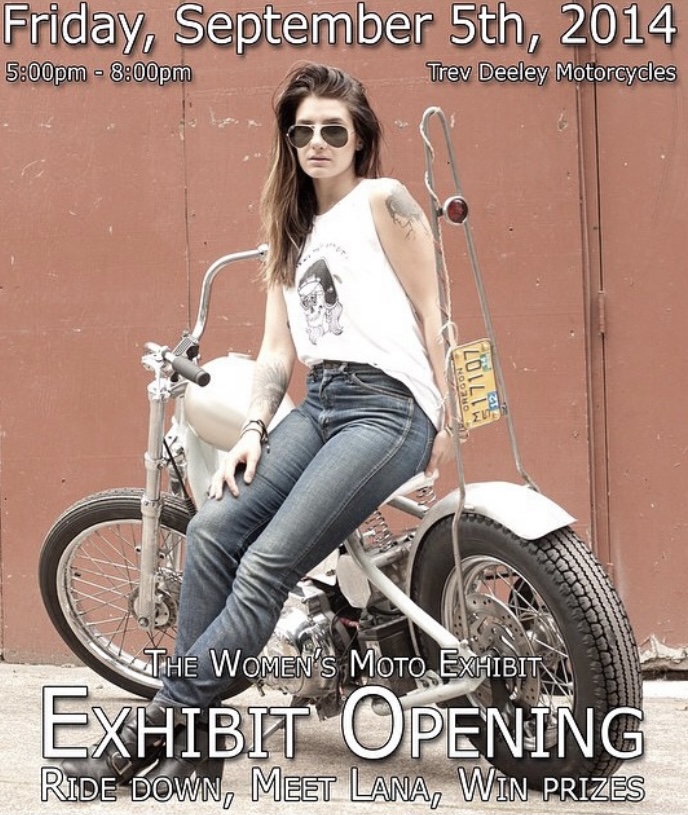 The poster for Lanas first exhibit in my hometown 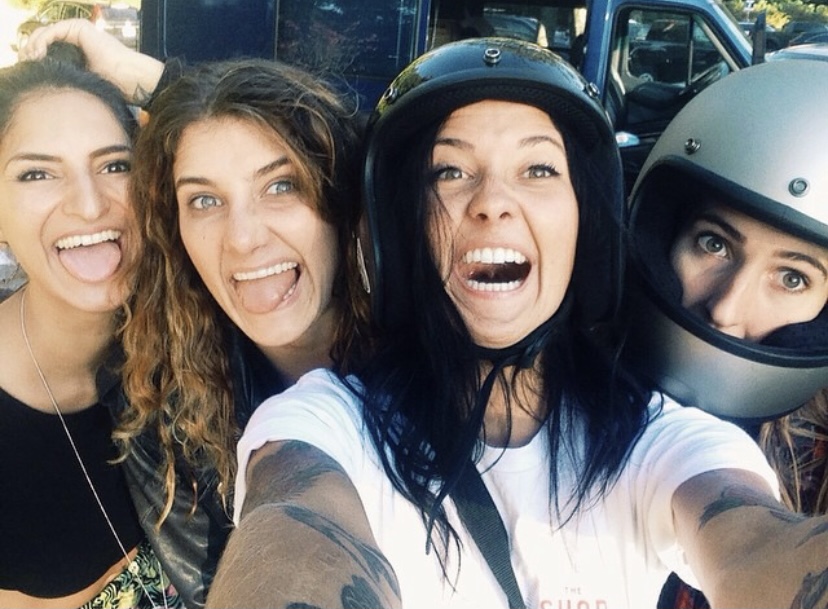 The first day Lana and I met

From there, Lana just grew and grew. She had tons of brands wanting to work with her and she was traveling all over the states shooting women from all walks of life. You may remember the “Highway Runaways” Harley Davidson Campaign where 6 women rode across the states on brand new bikes – that was all produced and shot by her. After that, she created a campaign for Husqvarna in the European Alps. She took me along and we rode 5,000 KMs across Europe over the course of the month shooting photos for Husqvarna, Converse and Levis. To say Lana jumpstarted my career is an understatement. 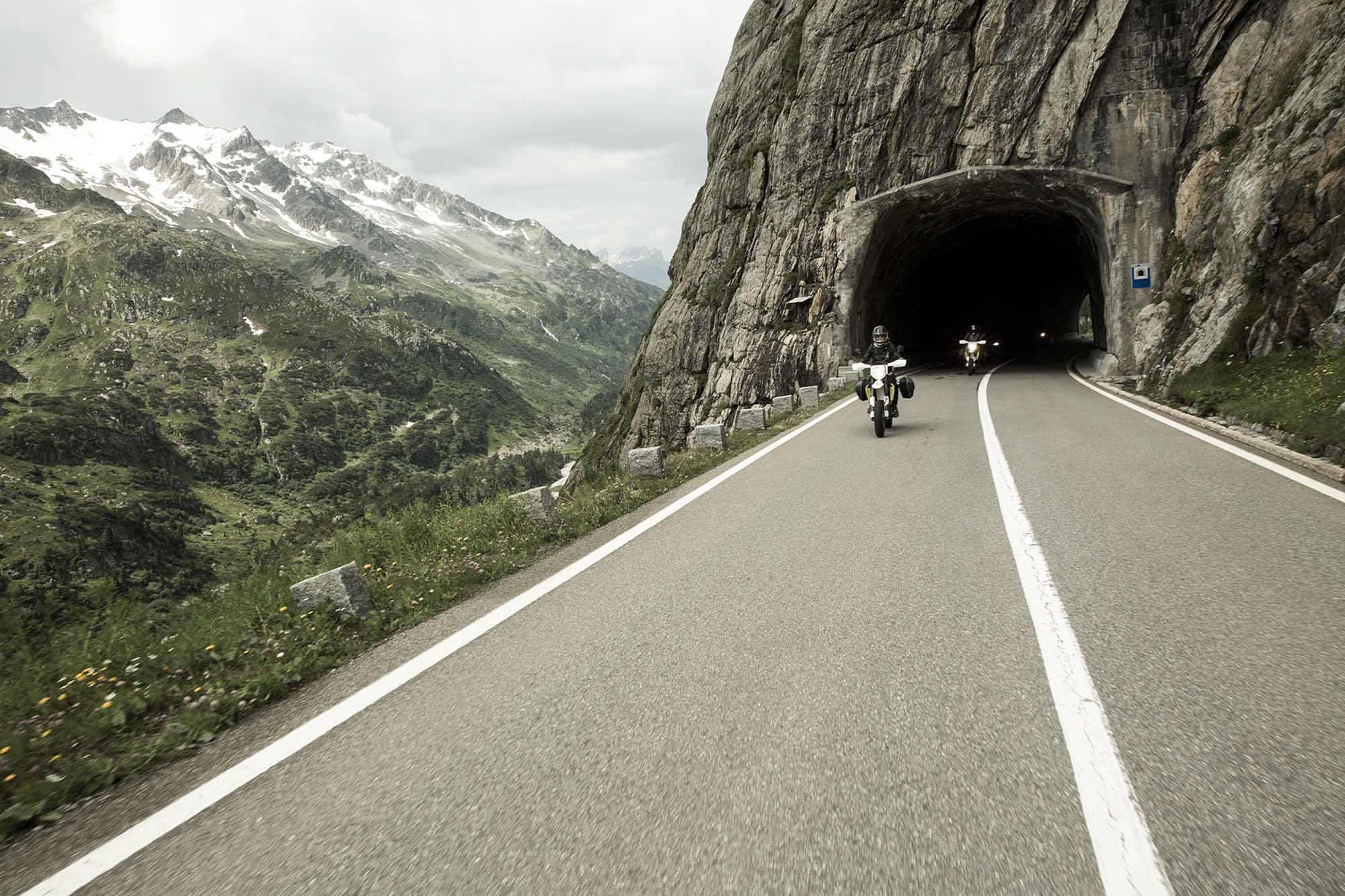 A photo of us riding in Austria

Since those years, Lana and I have put on 6 years of The Dream Roll. She also started the Paradise Road Show, a dirt bike event From Dawn to Dust, did a few more major campaigns and grew her Instagram following to over 100,000 followers. Lana has more recently got big into the flat tracking and dirt biking realm of motorcycles. She was one of the women chosen for the Build. Train. Race. program produced by Royal Enfield this year – a program for women to build their own flat track bike, learn how to race them and then race them together on a professional track.

Lana has evolved in all sorts of ways over the past 10 years and her career is a lot different now than it ever has been but she’s still making moves and riding motorcycles everyday. I asked her some questions to get things in her own words and see where she’s at nowadays. Here we go:

Who are you, where do you live and what do you do? What first got you into motorcycles?

I followed a group of guys on Harleys out to a swimming hole in Oregon in my car and was so envious of them riding motorcycles. The sound, the power, the pack they were riding in to get out there was EXACTLY what I wanted. It was a 90 degree sunny summer day and the freedom they looked like they were experiencing was so authentic and real.

What is Women’s Moto Exhibit?

The Women’s Moto Exhibit is a traveling photo documentary documenting the new wave of modern female riders. I travel around the world and take photos of the women I meet and share their stories to inspire other men and women to ride. How have things changed for you over the years?

The Women’s Moto Exhibit started out of my love of riding and the incredible women I met along the way who also rode. When the exhibit started women riders weren’t as common or at least they didn’t have as much of a community as they do now. With the popularity of Instagram there is an enormous community that has evolved. When I started doing the exhibit I was so focused on taking rad photos and sharing stories that I kind of got distracted from the thing I love the most – riding motorcycles. I’ve started to shift back into what makes me most happy which is exploring the country and world on my bike, camera or no camera. I love taking photos and meeting people but I’m more of a recluse and loner so being able to disappear into the woods on my CRF or hit fire roads on my Royal Enfield Himalayan with no cameras or phones is where I am most happy. 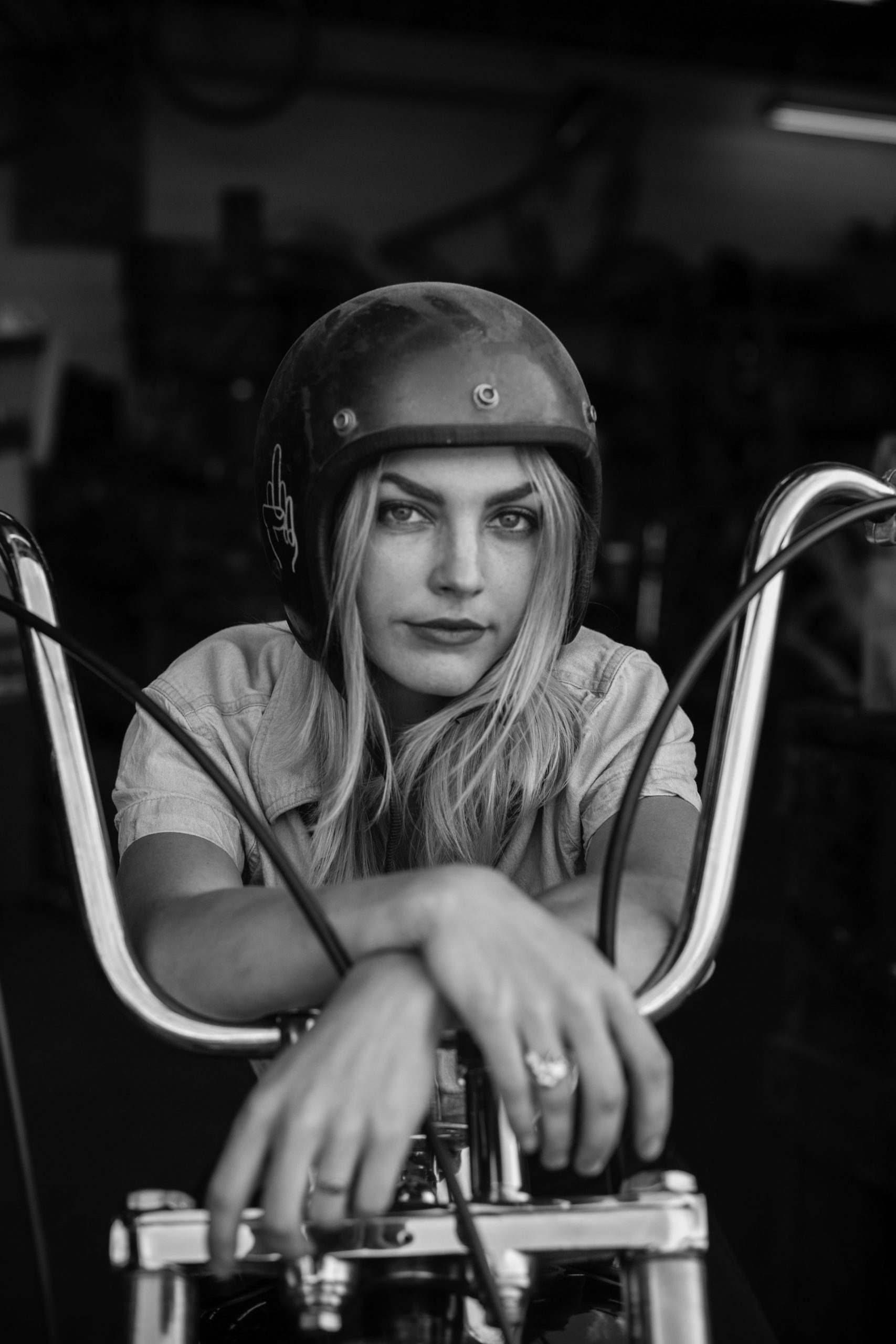 You’ve got into a lot of avenues of motorcycling over the years – what’s your favorite?

I love the story and freedom that all avenues of motorcycling gives me. When I first got into riding motorcycles I was really into the Cafe Racer vibe. Then I slowly started to transition to Harleys and then back to a more athletic bike. I like to ride what just seems fun at the moment and I am lucky enough to have amassed a sick collection of bikes that allows me many different categories of riding. I’ve had vintage CBS’, Shovelheads, Sportsters, a Bultaco and my most recent love are Royal Enfields. I was lucky enough to go to India about a year ago and ride a Royal Enfield Himalayan in the Himalayas with Royal Enfield. Most recently I was selected to be apart of the Build. Train. Race Program with Royal Enfield where we get to build a custom INT650 Twin into a flat track bike, train and race! It was a mind-blowing experience and I am so fucking stoked and grateful to get to be a part of such an incredible program. I’m most stoked because it’s going to get more women into motorcycle racing and build an even bigger community. This program is going to inspire women who didn’t think racing was a possibility for them.

Tell us about the bike you built for the Build Train Race program?

My main goal for the bike was to make it as race-able as possible and not focus so much on paint and aesthetics but more the balance and geometry of the bike. I worked with @seanslides out of Portland to build a safe and race-able bike. We measured, weighed and cleaned up the bike. We added a custom triple clamp from Cognito Moto, new wheels, swapped out the stock fork for an R6 Fork, pro taper flat track bars, removed front break, updated rear break suspension, took all the controls off, lights, breaks, and an updated kill switch.

It’s SO FUN. The scary part about racing is just the anticipation. Bree Poland and Royal Enfield North America did a great job of preparing us for the races. We got practice time at the S&S track and 1-1 time with Moto Anatomy which was so helpful. Practice makes perfect. The ladies I was racing against were seasoned racers so I was able to push myself and take their feedback and suggestions and apply it to real time on the track. Getting better is the best drug. Lana with her build

What’s your plans with racing and Royal Enfield moving forward?

I plan to race my flat track bike here in Boise! I just found a rad track 30 minutes from my house that is open year round. I plan on racing in Hooligan and really anywhere I can. I just love being out at the track hanging around people and racing and learning. Most of the time I am the only female out at the track which can be intimidating but I quickly get over it. Yesterday I went out to an MX track after not riding a track for 2 years and just threw myself in. The hardest part for me is just starting. Once I am riding I’m on cloud nine. 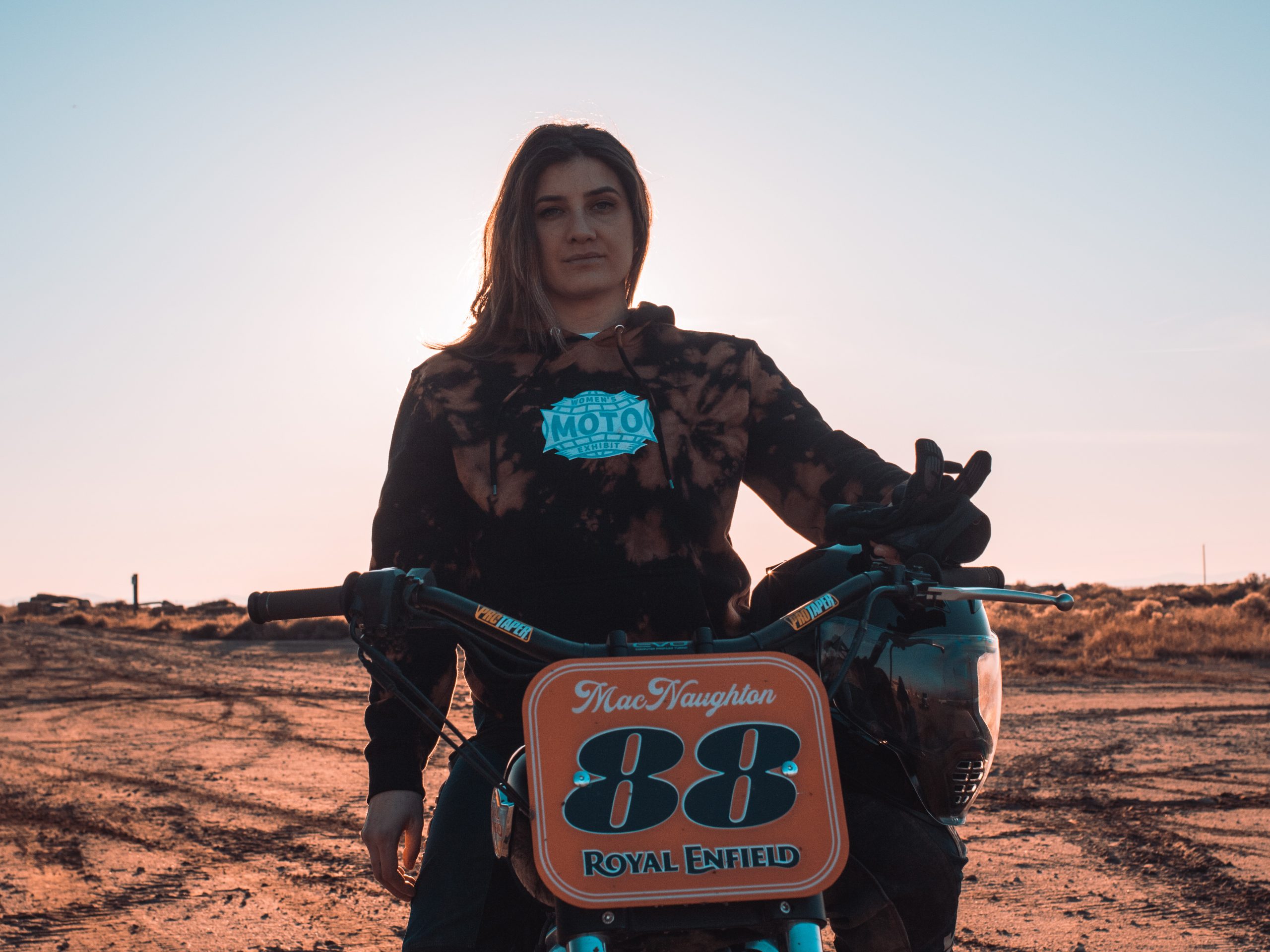 What are your plans for your career moving forward?

I was laid off from my job because of the pandemic – I was a creative producer at a couple agencies in Portland. I ended up moving to Boise Idaho because all my boyfriend and I wanna do is ride motorcycles and have fun. It’s been a great reset for us. We am currently trying to grow and plan The Dream Roll and Paradise Road Show as much as we can since we can’t have the event right now. I just got a job here in Boise which is great and I’m kind of just seeing where life takes me.

What’s the #1 question you get from women wanting to get into motorcycles? And how do you answer it? 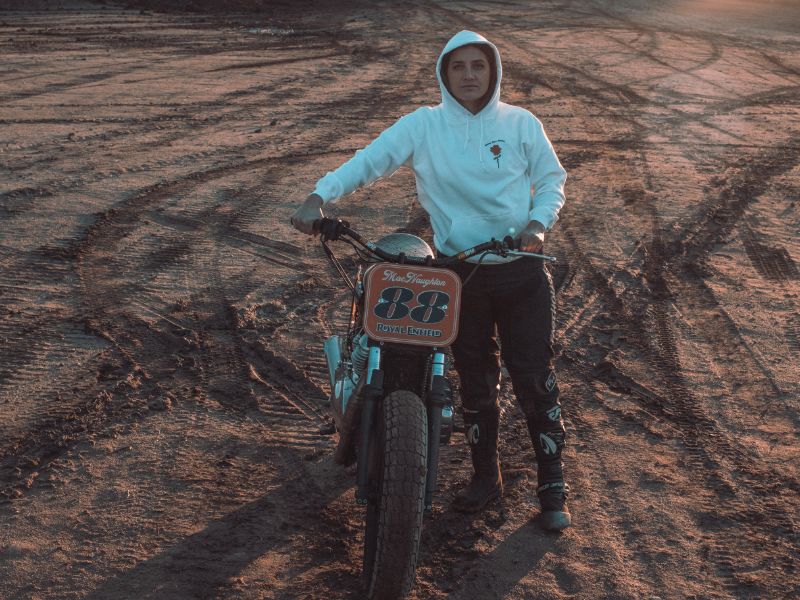 “Was I scared when I started?” The answer is ABSOLUTELY. Motorcycles are fucking dangerous – so being scared and apprehensive and taking the necessary steps to build confidence are so important. Ride within your means and stay safe always. Where the gear, take the classes and ride with people who aren’t trying to flex on the road.

Lana’s personal Instagram Is @fevvvaa – check it out for all her racing updates!