Candice Cooley is the Director of Marketing for Hogs & Heifers in Las Vegas Nevada. Along with the crew at H&H, she is contributing to a community that goes so much more beyond just motorcycles. People from around the world come to visit the bar that is known for being a bunch of naughty-do-gooders.

With her years of experience in the powersports industry, Candice loves to be a part of a growing industry that is forever changing and evolving. She is the cool aunt that gets to share her passion with her family and loves to give back to a community that has been such a big part of her life for over 20 years.

She helped bring the FIRST female bike show to the Las Vegas BikeFest and is the President of Faces Behind the Helmet which brings awareness to the public about motorcycling.

If you find yourself in Las Vegas, you will want to stop by Hogs & Heifers to say “hi” to Candice and the gang and be sure to check out one of their annual fund-raising events.

Where are you from and how did you end up in Vegas?

I am originally from Connecticut, but by way of California came out here 30 years ago to finish college. I did not think I was going to stay, but I have been here now 30 years. I absolutely love Las Vegas.

What is one of your most favorite memories from Hogs & Heifers?

I have to say my favorite memory, or my favorite thing about Hogs and Heifers, is the events we do for the non-profits, the charity events, especially for the Nevada Childhood Cancer Foundation. We raise a lot of money for these foundations, whether it is for the Nevada Childhood Cancer Foundation, Veterans, First Responders, or the LGBTQ community, we are very proud to be a member of the community and giving back. Candice at a Hogs Heifers Event

Do you have any “traditions” at Hogs & Heifers?

Certain events have become tradition such as our Hog Wild for Kids Charity Event and our Miracle on 3rd Street Toys for Tots Motorcycle Run, both benefit the Nevada Childhood Cancer Foundation. Overall, our biggest tradition is to just being down and dirty, naughty-do-gooders. We are naughty in the bar, but we also do a lot of good in the community and you can expect to come into the bar any day and there is going to be shenanigans going on.

Do you ride? Was there someone who played a huge part in getting you into riding?

I started riding in 2001 and I remember I was working for a major powersports group and one day I was at work, six months after starting, I walked out of my office, and I just started going around and sitting on bikes and I was hooked. Back in those days, there were not a lot of women who were riding motorcycles. Women’s riding groups and MCs were almost non-existent, but I was intrigued on the freedom of two wheels and have never had an issue with doing anything by myself. I was lucky enough to have worked closely with Tina Carrell, the only female General Manager throughout the powersports group, and she became a role model to me in my professional and personal life. She had been a professional Personal Watercraft Racer and she inspired me to become the best that I could working in the industry, and to get out there as much as I could and enjoy the ride regardless of what type of vehicle it was. Proud to say she is still one of my closest friends today.

What was your first bike and what do you ride now?

My first bike was a Suzuki GZ250. Bought that little bike, took it home and learned to ride myself out in the neighborhood. Within three months, I came back and changed it in for a Yamaha V-Star and then started riding anything and everything I could from then on.

The wonderful thing was that working for the powersports group, I had the opportunity to ride everything. One weekends I am taking home a Kawasaki Ninja, the next weekend I am taking home a YZ 125, so I feel like I have experienced it all.

Recently, I picked up a 1974 Kawasaki MCO one. It is a little tiny CC trail bike, and my goal is to get it running for my wife to ride. Over the past few years, and after a few knee surgeries, I have taken to riding more dirt than anything, especially on my quad. 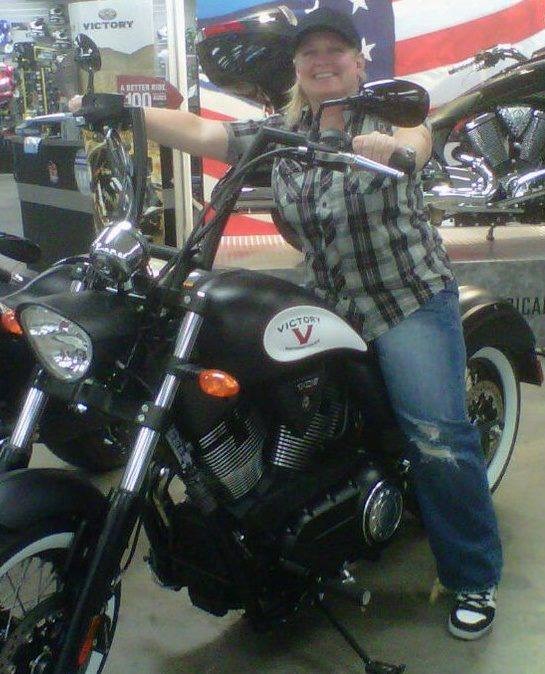 Testing Out A 2012 Victory Highball

What other things are you involved in outside of motorcycles?

I like to spend as much time as possible with my wife and our dogs. My wife introduced me to camping, which I never really did growing up and I absolutely love it. We can throw the quad in the back of the truck, hook up a trailer and just go. I’m at a point in my life where I just enjoy life.  A nice brunch with my best friends, binge watching tv on the couch, taking in a Golden Knights game…just the simple things bring me so much joy. 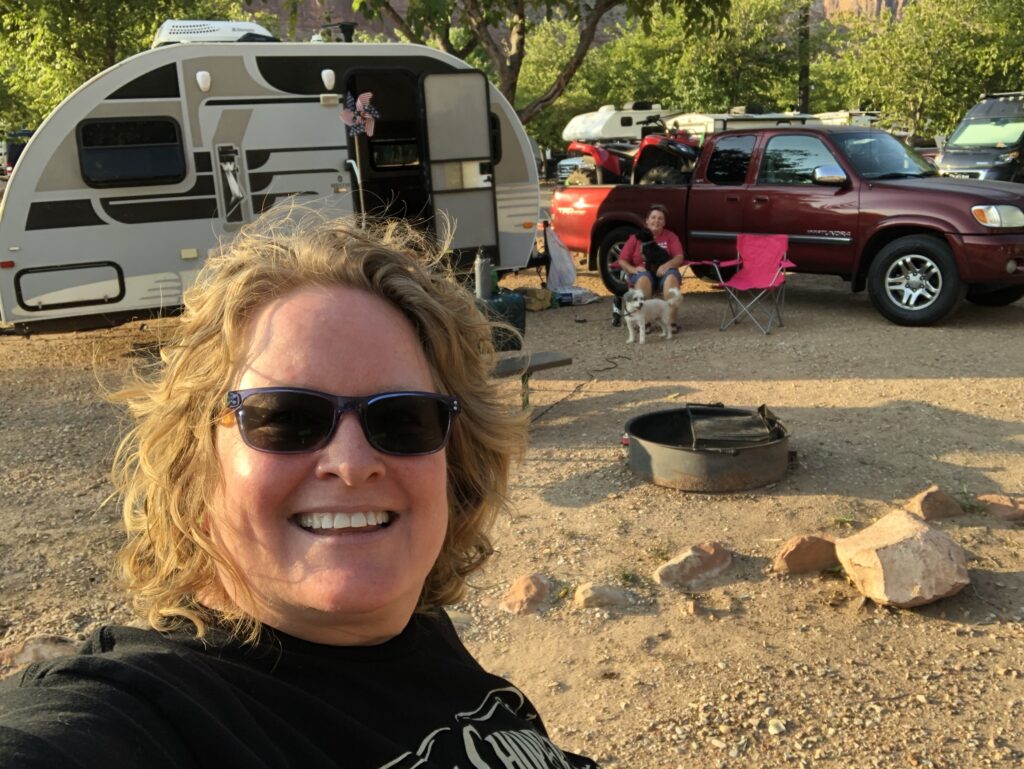 Candice Camping with Her Wife

What other things are you involved in outside of motorcycles?

I like to spend as much time as possible with my wife and our dogs. My wife introduced me to camping, which I never really did growing up and I absolutely love it. We can throw the quad in the back of the truck, hook up a trailer and just go. I’m at a point in my life where I just enjoy life.  A nice brunch with my best friends, binge watching tv on the couch, taking in a Golden Knights game…just the simple things bring me so much joy.

How have you seen the LGBTQ+ community growing in the motorcycle community?

It is not perfect, but we have seen society in general become a bit more accepting of the LGBTQ community, and businesses are realizing that we are a strong demographic who have disposable incomes. So why not market to us? Why not make us feel accepted and appreciated? We are going to be coming in and we are going to be buying the vehicles and the gear.

Where is your next trip planned for?

Our next trip we will be going with some of our family to Disneyland and I am so excited to see our Great Nieces experience the magic of Disney. After that I will be traveling back to North Carolina for my nieces High School Graduation. Last year for my nephew’s graduation, we all went to Durango, Colorado. Each family member planned an excursion. So what did I do? I went and rented side by sides, RZRs. 21 years of working in this industry and no one in my family has ever gotten into it. So, I said, I am going to get you all into riding Polaris RZRs. They said it was the most fun they have ever had. I love the fact that I finally able to introduce them to the fun of powersports. 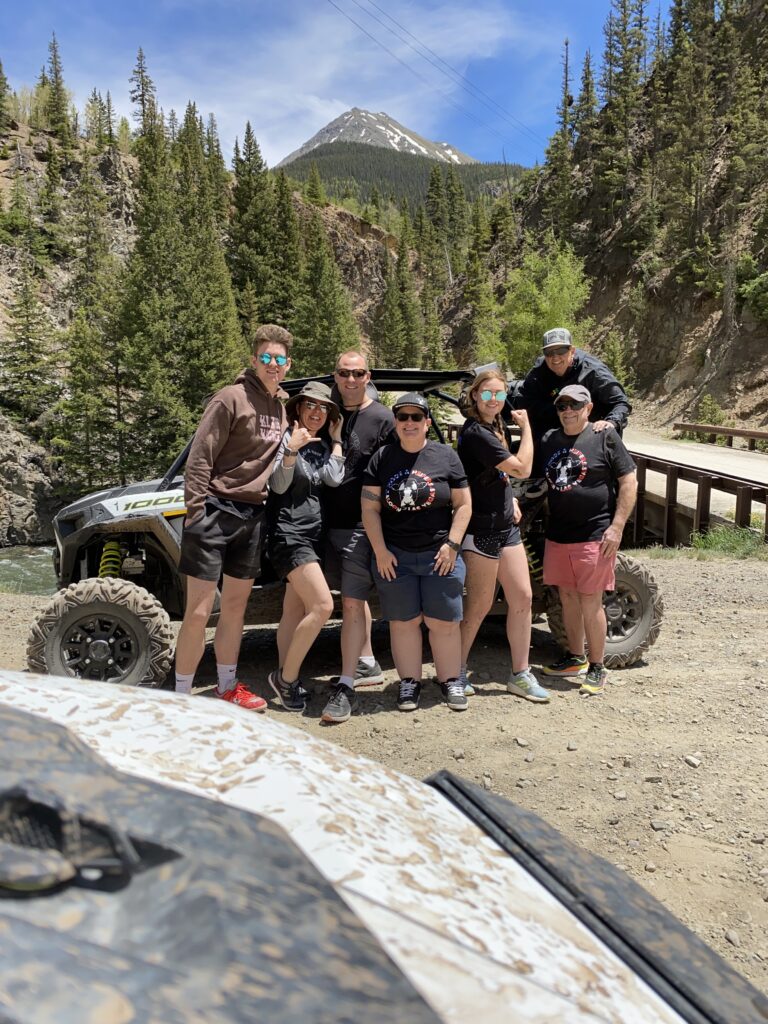 Candice in Colorado with her Family

What is your favorite part of your job in the industry?

Regarding the motorcycle/powersports industry, I would say It is the evolution of where we are going. I love to see everything from the newest vehicles the manufacturers are putting out, all the after-market upgrades and the increase in technology. The new generations and demographic of riders. To see little girls who are taking to dirt bike racing, that for so long was just a “boys sport” it is inspiring.

If you could plan a road trip with anyone, who would it be and why?

That is a good question and there are so many people, but two ladies stick out who have been major influencers to me both working in the industry and being a part of the community. In the early 2000’s I attended a training that one of the major powersports manufacturers was putting on and one of the seminars that was put on was by Genevieve Schmitt. I remember thinking after her seminar that there was so much, I could still do in this industry and in my riding and that just because I am a female, it should not hold me back. Marilyn Stemp, is my next Rock Star that I had the pleasure of meeting her at Las Vegas BikeFest many years ago.  I absolutely adore Marilyn, all that she has done for the industry in general but even more what she has done for women riders and bringing women to the forefront of the sport and industry. I think many people will agree with me that Marilyn, is the biggest CHEERLEADER when it comes to anything motorcycles. She shows her support and love to so many and because of that, big things are happening for so many.

It is not so much of the ride that I would enjoy with these ladies and many others, but those camp-fire stories we would all share at the end of the day. 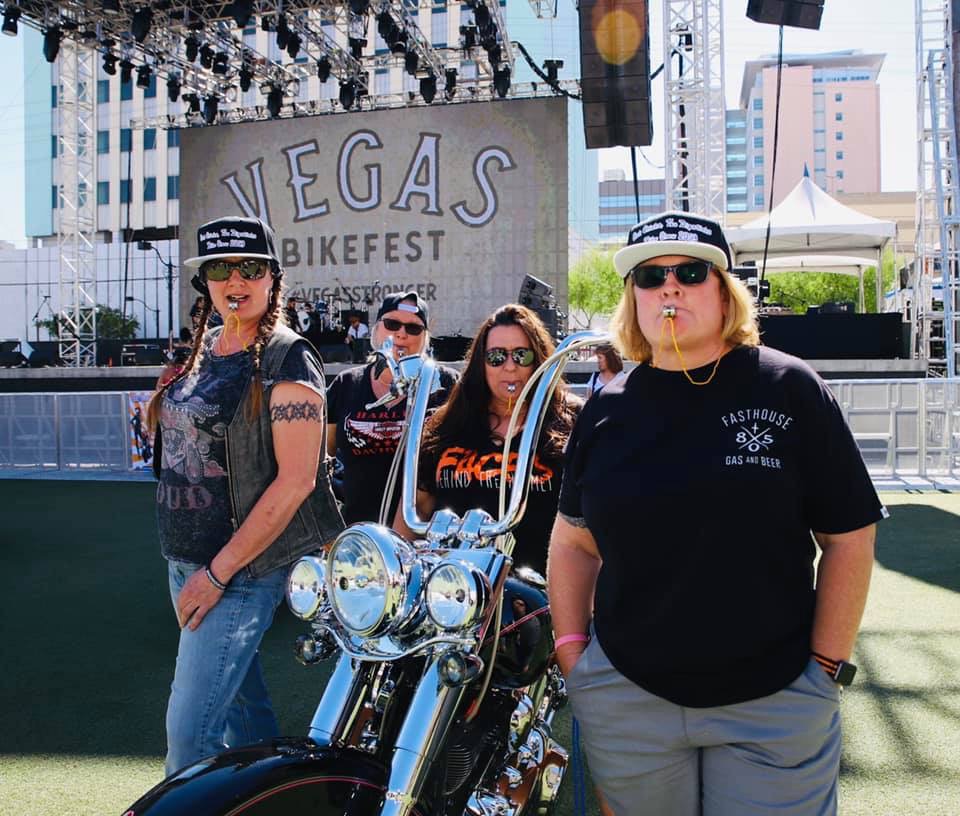 Sick Chicks, No Dipsticks Presented by Faces Behind The Helmet All Female Bike Show at Las Vegas BikeFest 2019

Have you ever been in a motorcycle accident? If yes, tell us about it? What did you learn from the accident?

I have never been in an accident while riding on the street. I came close, riding through a neighborhood, years ago, late at night, no one was around. At a four way stop, I waited a little longer than normal because something told me not to go and I am glad I did because a car came flying around the corner and blew through the intersection. The rate of speed they were going I would have been seriously injured, if not killed.

I learned wait, never just jump out on a green light, or empty intersection. Check your speed and be aware of your surroundings. There is more to the person who is behind that helmet than just a motorcycle ride and my life matters. 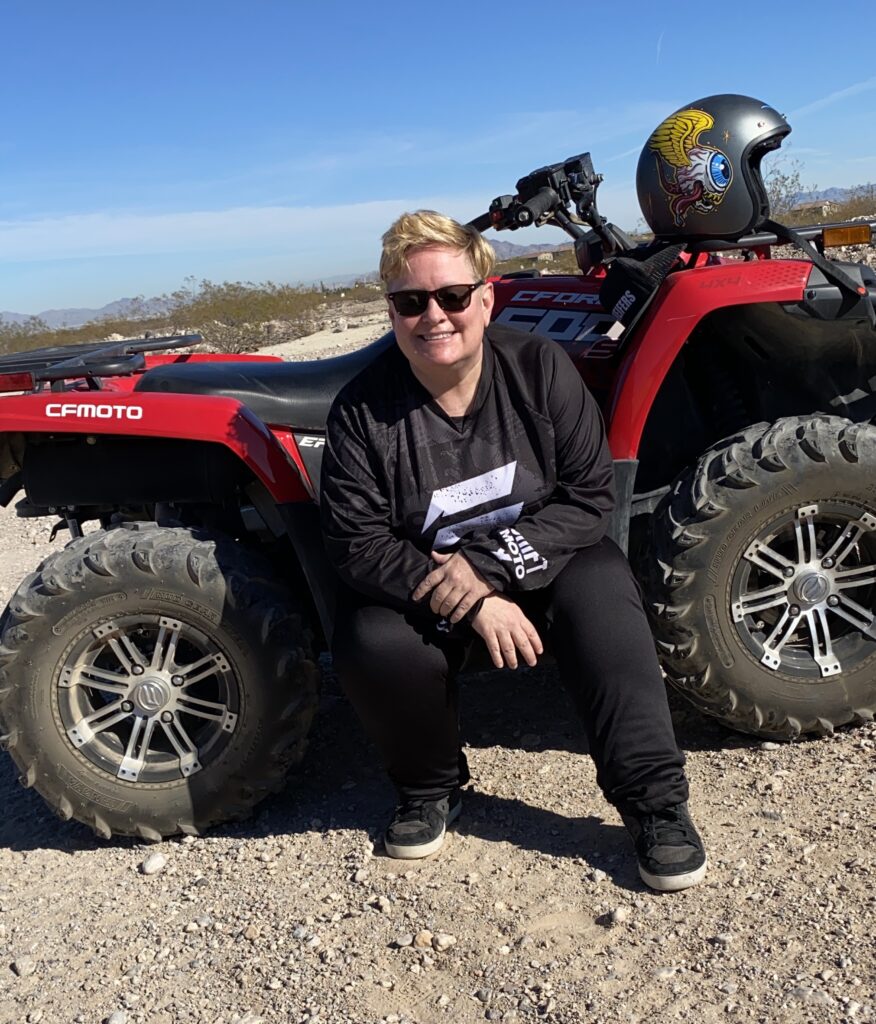