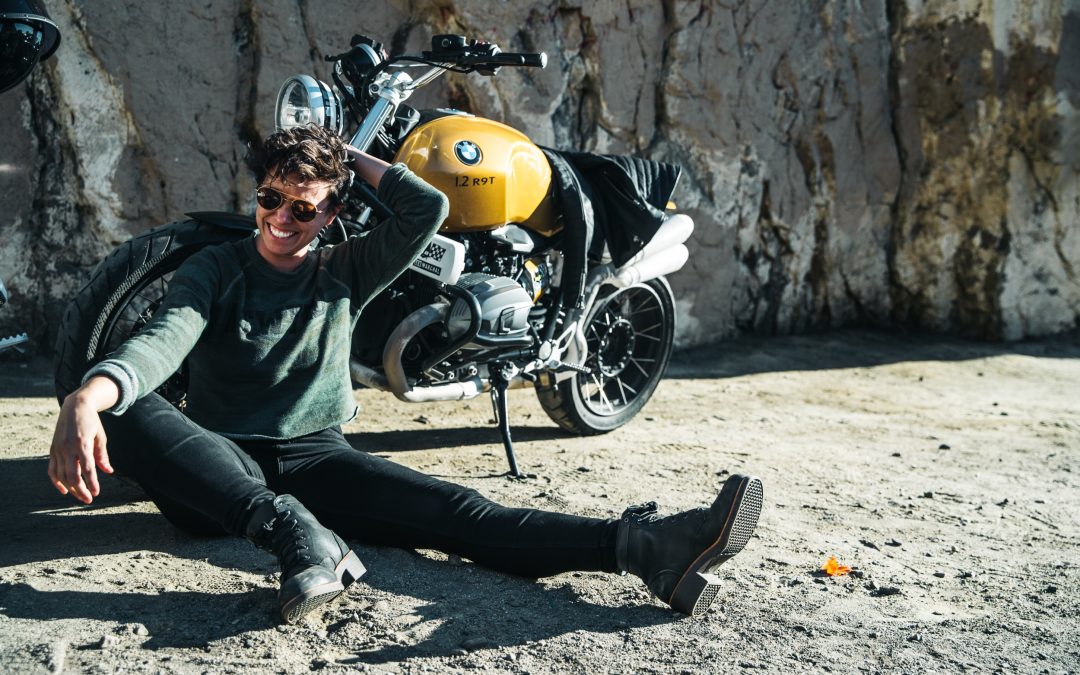 No regrets when it comes to riding motorcycles – Briana Venskus

The first time I met Briana Venskus I walked by her a few times not knowing where I recognized her from. She just looked familiar. I figured I had probably met her at one of the Babes Ride Out events or something. But, that wasn’t it. Then it hit me, I think I watched her get eaten alive by zombies. Briana played Beatrice in the hit AMC show The Walking Dead among a slew of other awesome roles on TV. I went quickly into FanGirl mode and it took zero time for us to become fast friends over a shared love of riding motorcycles and camping in the desert. I got to catch up with her to hear more about ripping motos around LA, how she got into riding, and what her thoughts are on the likelihood of the zombie apocalypse actually happening.

Where are you from originally and what brought you to LA?

I am originally from North Carolina! I grew up going back and forth between NC and New York and then eventually settled in NC. I came out to Los Angeles for school! I attended CalArts up in Valencia, CA… so I suppose technically I can’t say it’s LA proper… But close enough!

What is your favorite way to spend your time when you are not riding your motorcycle?

I love to hike and walk around my neighborhood; I grew up in nature so it’s extremely vital for me to see a minimum of 200 trees a day. Haha! I love to camp too! But Truck camp… I’m not a big tent person anymore… When I’m home I love to write and have spent the last year working on 3 different projects that have been taking up all my brainpower, hopefully, I’ll get those in a nice place soon… but of course, nothing is ever really finished is it? How did you get interested in riding a motorcycle? What was it about riding that attracted you?

I’ve always thought motorcycles were just the coolest… My Uncle had a big Harley when I was a kid and I always thought that he was just the coolest dude ever. He was also an artist, so I think in many ways he was an idol of mine that I could aspire to. An artist covered in tattoos riding on two wheels! So, it was inevitable that I would eventually end up on a motorcycle…it was just a matter of WHEN. I think what attracted me as an adult to get licensed as a rider was that I was longing for a sense of freedom that I wasn’t finding here in LA. It’s very easy to feel trapped here, especially in my line of work, it feels like you can never really leave because you’re also on call for something, be it work or an audition. So being able to ride really allowed me to feel that sense of escape without having to literally escape LA.

How did you know that riding was for you and what were some of the hurdles you had to jump to get into it if any?

I knew it was for me before I even rode a motorcycle haha, some things you just know. The biggest hurdle for me getting into it was being adaptable to the terrain. We’re very lucky to have it all out here in Southern California, but that also means you have to know how to ride all sorts of roads. So, getting that under my belt definitely took some time to be comfortable with, but now whenever I encounter new terrain it gets me all fired up!

How did you find a community within the motorcycle culture?

When I got my license out here in CA a bunch of the crew guys on my show rode motorcycles, so they were crucial to dipping my toes into the riding culture out here. Aside from that… I’d say the Magic of Social Media! I just scoured the internet until I found people I clicked with, and that almost immediately came in the form of Babes Ride Out. I have been going to Joshua Tree since I moved out here, so to find a group of badass ladies riding around in the desert was a REAL TREAT! A lot of those girls I met at my first BRO are part of my core group of friends now. And I found that after I attended BRO and was wearing one of their shirts out and about people would come up to me and be like “OMG BRO! I went 2 years ago…” It’s an instant connection with whoever knows of it or has attended it. What kind of bike do you ride and why? Any modifications to make it your own?

I have a Triumph Bonneville T120, and it is PERFECT. Haha! I’ve done all sorts of crazy things to it. Blacked out the majority of it, got some slips on’s, custom seat, sissy bar, lots of electrical relocating, removing and lifting fenders. It’s been REALLY fun making it all come together, and I have to thank Kevin Stanley over at Moto Chop Shop for it all, that’s guy is a wizard when it comes to making your ideas come to life.

Tell us about some of your best road trips or adventures on your bike.

I have yet to do anything over 1K in one trip, but I’ve done TONS of SoCal adventures… again we are so so so lucky to be near all this riding. I think my fave so far has been The Central Coast at BRO a couple of years ago, I led this wild ride back from the coast and took us on this gnarly but beautiful farm road… some of those turns and drops will haunt me for years! So So FUN. One day I did HWY 2 from Echo Park through Wrightwood, then over HWY 15 into Big Bear, and then down the backside into Yucca Valley AND THEN camped at a friend’s property out there. Needless to say, I was BEAT after that.

I really want to do Utah, Wyoming, and Idaho… I did a road trip in my truck this past year, and all I could think about was how I wished I was on my motorcycle. How would you describe riding in LA to folks who maybe have never experienced it?

It’s like being in Grand Theft Auto….but in real life. People are WILD out here, and that goes for other riders too! Haha. It’s my favorite over the Holidays when all the out of transplants leave and you can rip all over without having to worry too much about the dumb-dumbs around you.

What is one of your favorite ride destinations nearby and why?

I mean for a day trip it’s hard to beat HWY126 up into Ojai… that ride to me is just so classic SoCal.

Best lunch spot in LA to ride your moto to?

I love riding to DTLA for a good lunch spot…or food truck for that matter. Wurstkuche is one of my faves. They also have a location on the Westside which was great after riding the PCH. 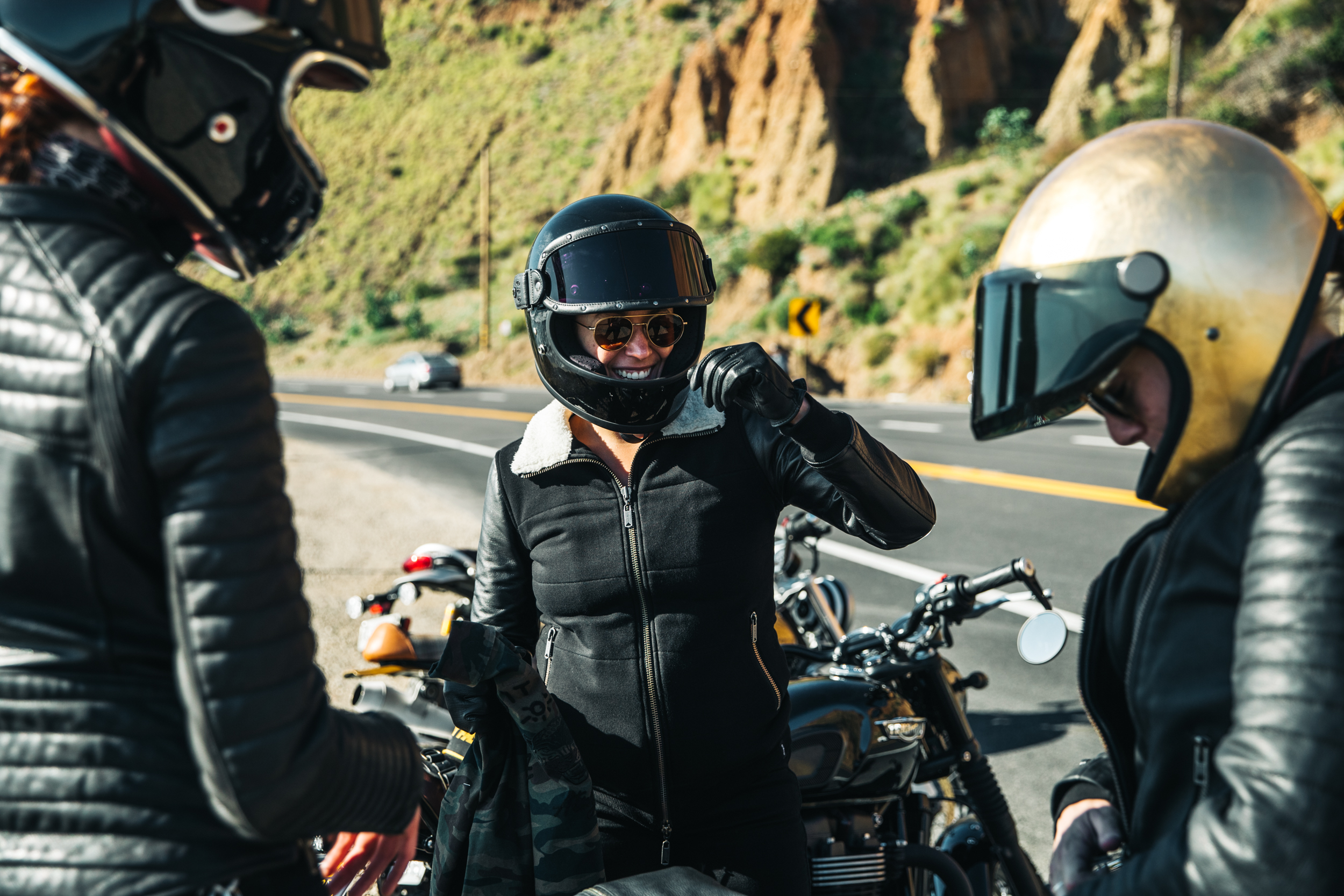 Have you ever been in a sticky situation on your bike? Do tell.

Oh gosh, WHO HASN’T?!?!? Right after I got my Triumph I went to BRO and it was the year that they had had some MAJOR washouts on the roads… I was staying at this house up near the park entrance and on my way up there I got trapped in about 2 1/2ft of a washout….. it was….awful… BUT I didn’t drop it! SO THERE! Thank god for the sweet woman in the minivan behind me, she helped me dig a good path out and I got to the house in one piece. That whole weekend of BRO was very exciting…who doesn’t love a 500 lb bike in sand?!?

Have you always wanted to be an actor?

Yes? Honestly, when I was a kid, I thought I could just grow up and play in the woods all day, so imagine my disappointment when my parents told me that wasn’t a career path! I have always had the bug for acting, but I definitely had to build up the confidence to do it. I’m not inherently outgoing when it comes to putting myself out there….so to get on stage or in front of a camera took some time.

Did you have any icons that you looked up to when you were young?

Oh yes! I mean what girl DIDN’T want to be Angelina Jolie growing up? Well…Probably quite a few, but I thought she was the coolest. I was DEEPLY obsessed with Robin Williams, I still am, I just think he was and continues to be pure magic.

What do you love about acting?  What is one of your favorite roles you have ever played and why?

I love the challenge of transformation into a character! The work that has to be done to get into the mindset of a human that isn’t you. It really requires you to exercise your empathy muscle. I love that challenge and I think ultimately it has made me a better person, I see everyone as unique in their own way with their own value and place in this world, and if I wasn’t in this profession, I think I would have a much harder time coming to that realization about the people around me. One of my favorites was playing ‘Billie’ in Grace and Frankie… mostly because I got to work with LEGENDS, and because it was a really fun character AND we got to shoot in the old bar at the Sportsman’s Lodge which has since been torn down…but damn, it was such a great bar! 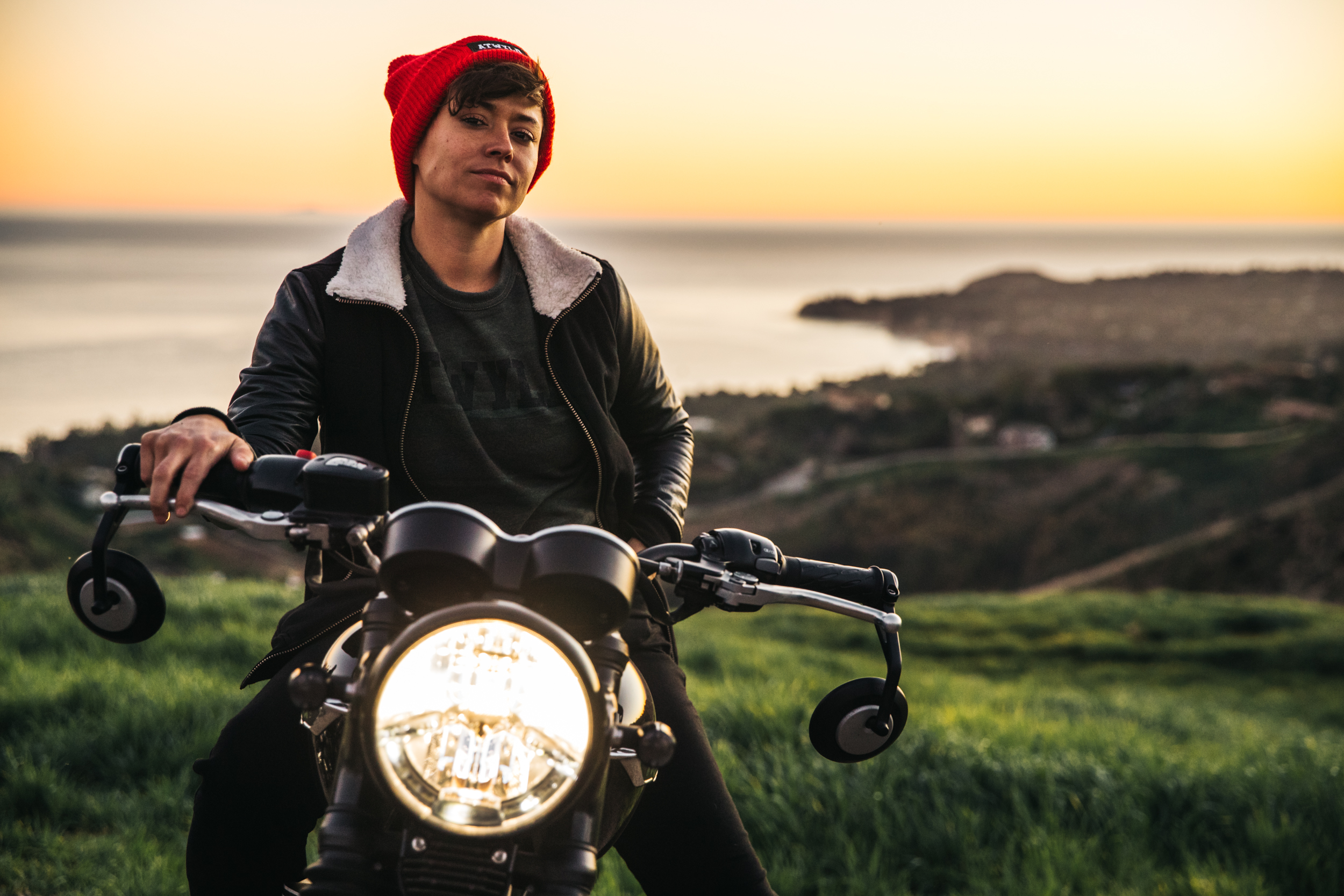 Do you think that the zombie apocalypse is possible? Explain.

Ummmm… how are we not living in one right now? Haha! I definitely think we’re in a bit of a Social Media/New Media Zombie apocalypse right now… and the Zombies are EVERYWHERE. Seriously… I look around sometimes and the number of people glued to their phones is baffling to me. Sometimes they walk into things though and that’s pretty funny.

Have you ever used your acting skills to get out of a speeding ticket or traffic violation on your bike? Be honest.

HAAAAAAA!!! If ONLY that worked! The last time I got a speeding ticket I was going….too fast, and I was also wearing the ATWYLD “STAY FAST” baseball cap… The officer had a good chuckle, but he still gave me a ticket.

What would you say to someone who is thinking of getting into riding for the first time?

JUST DO IT! There are hundreds of reasons you can come up with to not do something… that’s kind of how I was acting before I got my M1 on my license out here in CA… I was worried about how it would affect my career, worried that it would give my mom a heart attack, yada yada yada… but ultimately….anything can be dangerous, trust me, I can make folding laundry dangerous. If you have a gut feeling that is making you gravitate towards riding, GO WITH IT! There are many things I regret or wish I had done differently in my life, but riding a motorcycle has and will never be one of them. 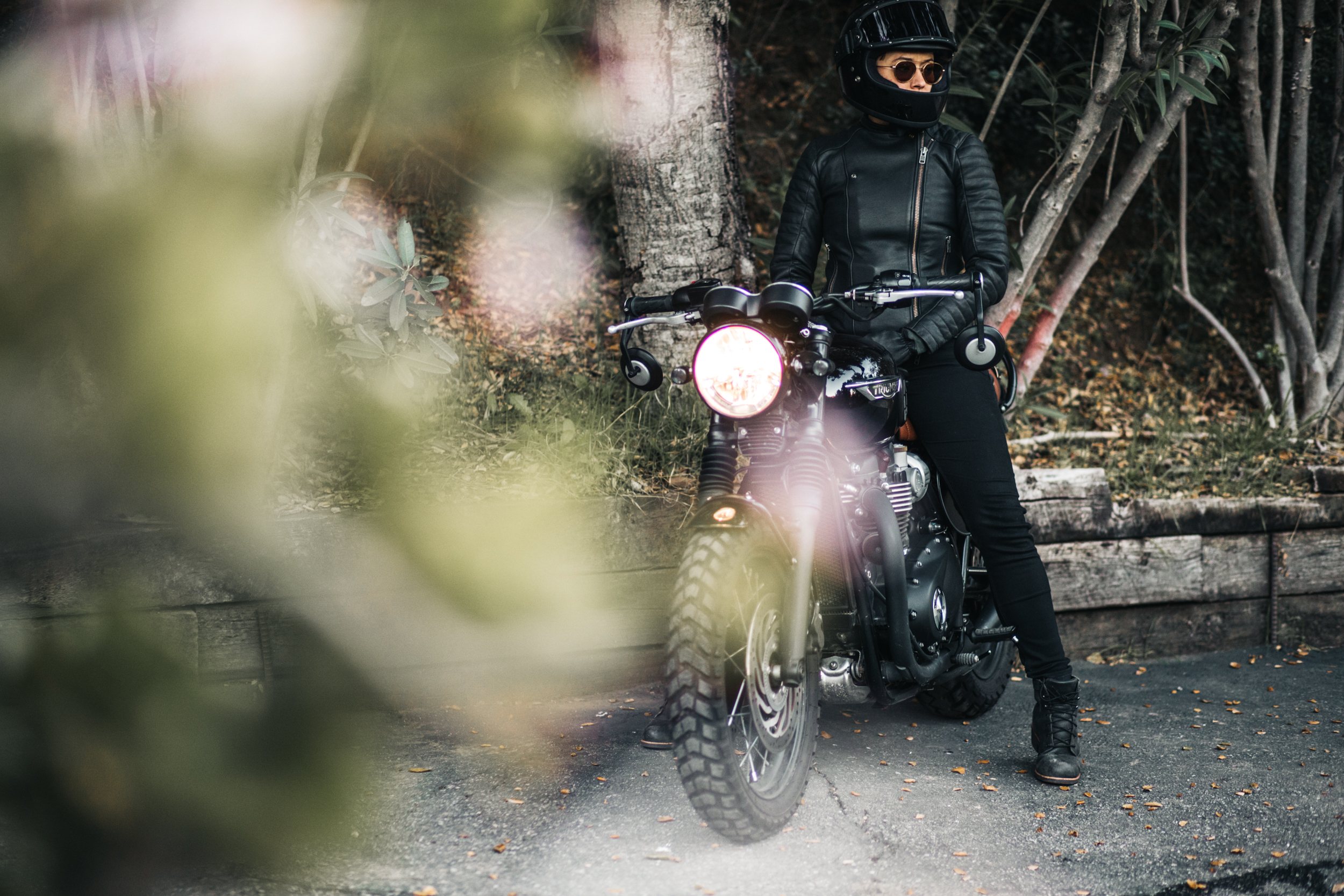 Photos by Drew Martin for ATWYLD