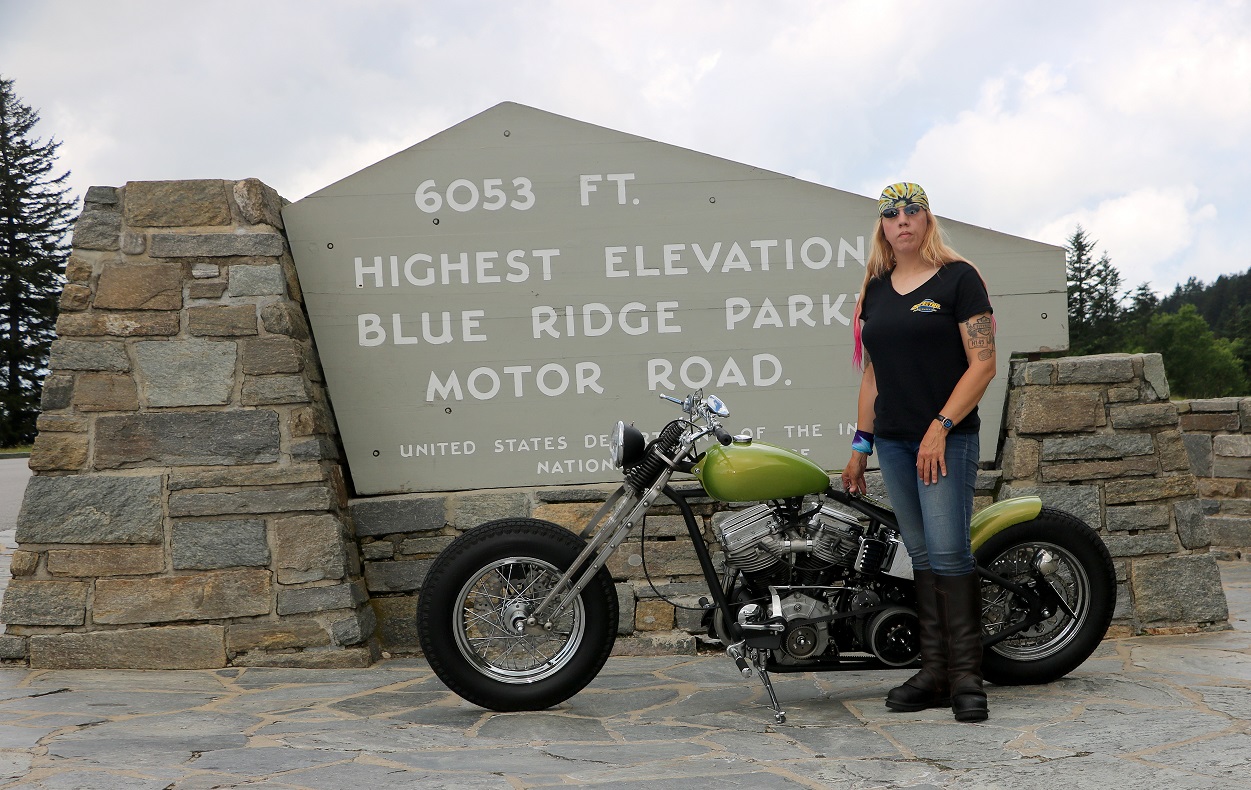 My name is Chris Gibbany and I have been a BAM member for almost 10 years. I am from Harrison, a very small town in Arkansas. Although I have been riding since I was 16, I have never participated in a long ride and I have NEVER taken a “vacation” of any sort. When I found out that “The Long Road”, a 1000+ mile journey that ends up at The Smoke Out in Rockingham, North Carolina, was leaving from Eureka Springs, just 45 miles from where I live, I started making preparations to ride it on my rigid 1956 Harley FL Panhead. In the beginning there were seven of us who were going to ride vintage bikes there, with me being the only woman. I secured sponsorship to help me pay for expenses along the way. Sta-bil and 303 Products, made by Gold Eagle became my main sponsor. Avon Tyres came on board with a new set of tires; Spectro Oils gave me a case of 60 weight oil, Viking Bags and Motorcycle House supplied me with a Go-Pro and Baker Drivetrain helped out with a gas card. Russ Brown Motorcycle Attorneys® offered me funds in return for the story about my ride… 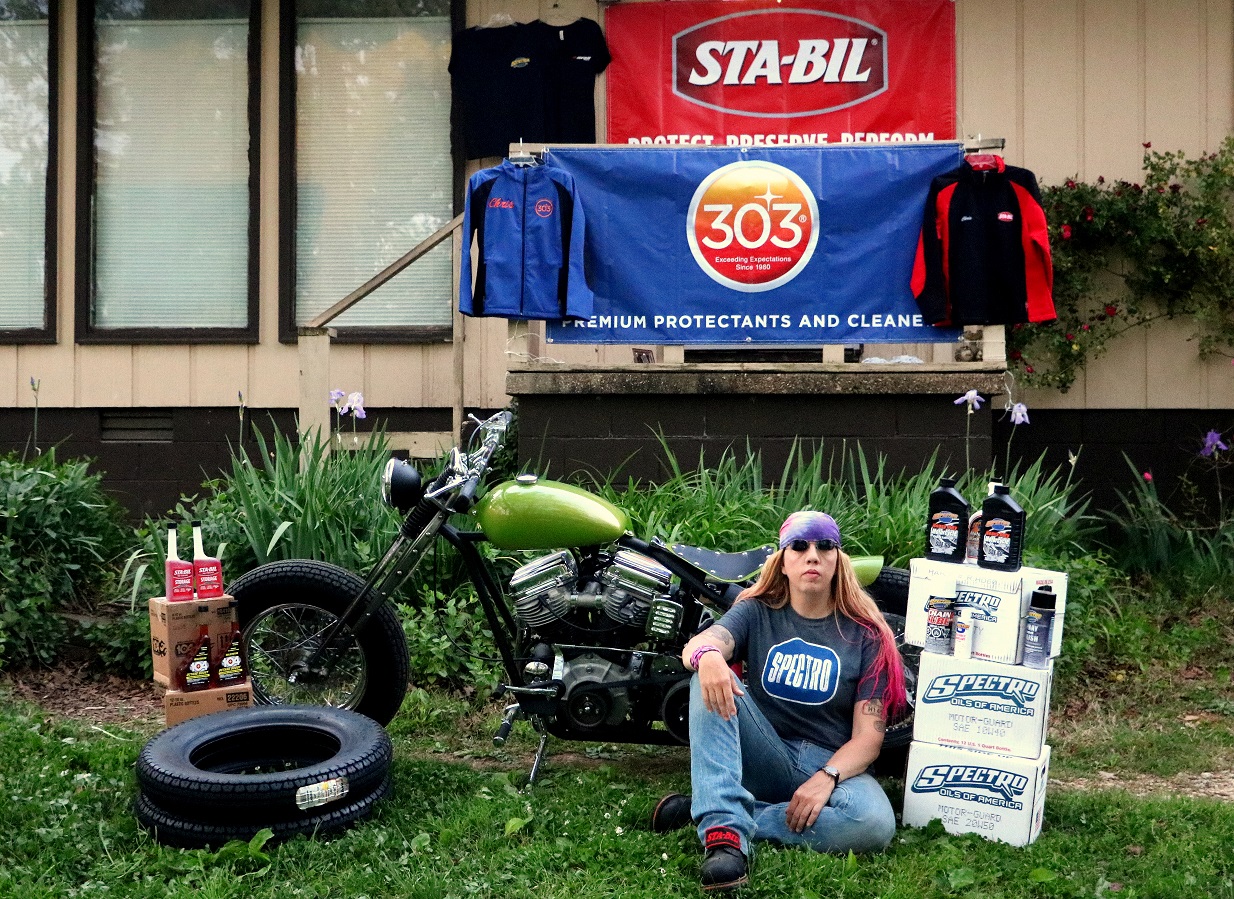 At the last minute, four of the guys backed out. Since my husband and I were riding two old bikes, with him on a 1946 UL Flathead, we decided to bring a chase rig, leave a day early and arrive at The Smoke Out on Saturday instead of Friday. Even though “The Long Road” had no particular “rules”, we were no longer qualified to participate in it. 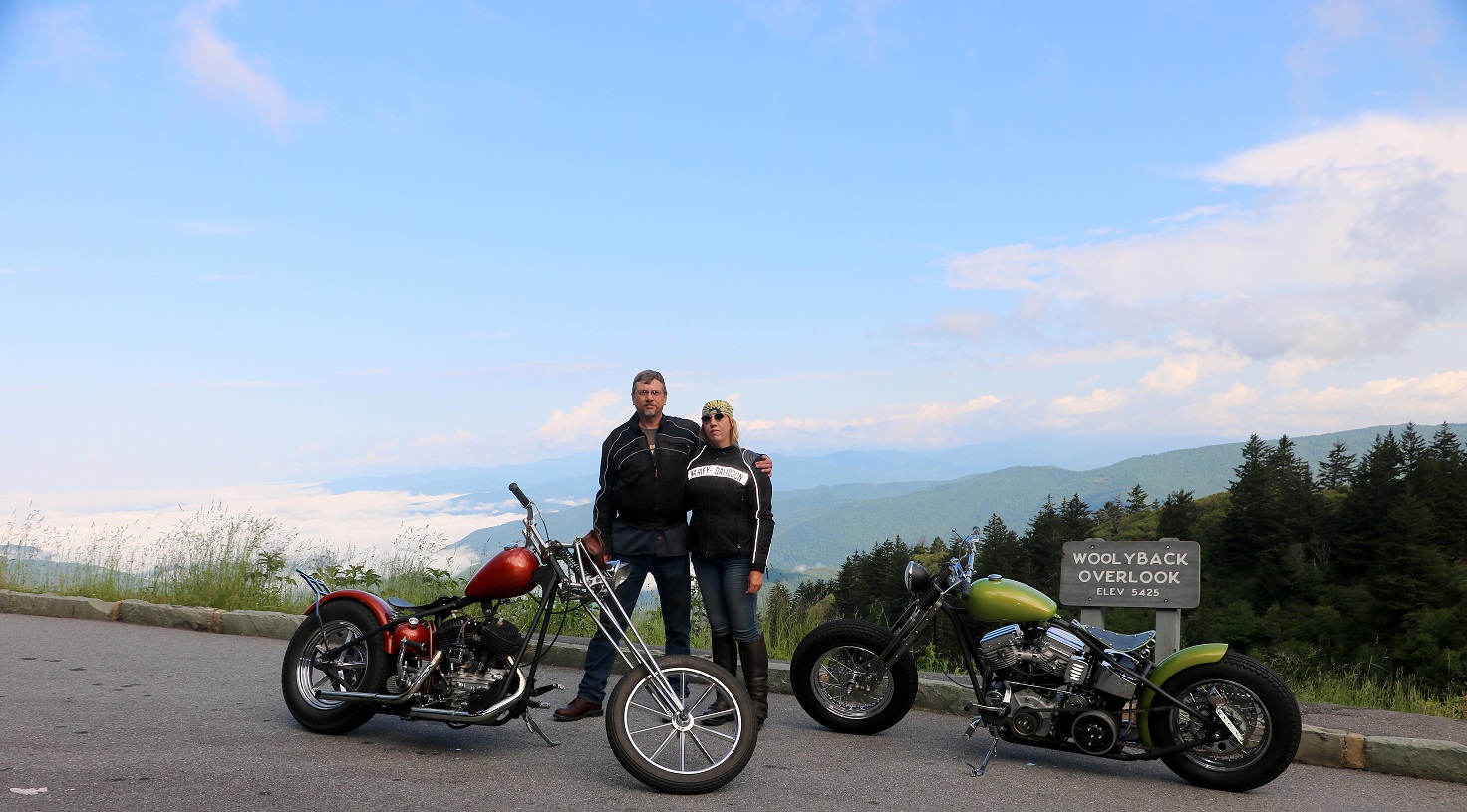 Our trip was pretty uneventful until we got to a small town in Tennessee where we just happened upon the type of motel where you sleep above the covers while firmly gripping the matching “husband and wife” Sig-Sauer pistols that we brought along. When my husband got a text from our chase driver, it read “Will trade beer for pistol”. He wasn’t kidding so we swapped items and each spent the night with one pistol per room with the chair up against the door.

Our travelling partner ended up with a room that had a connecting door; NOT connected to ours, so as he put it “Now I have to watch two doors!” It really was quite funny! The man who checked us in could barely speak English as he told me “One muffin, one banana, one coffee”, when I asked about breakfast. Of course, since we are rogue bikers, we all ended up taking as many bananas and muffins as we could so that we wouldn’t have to eat again while on the road. 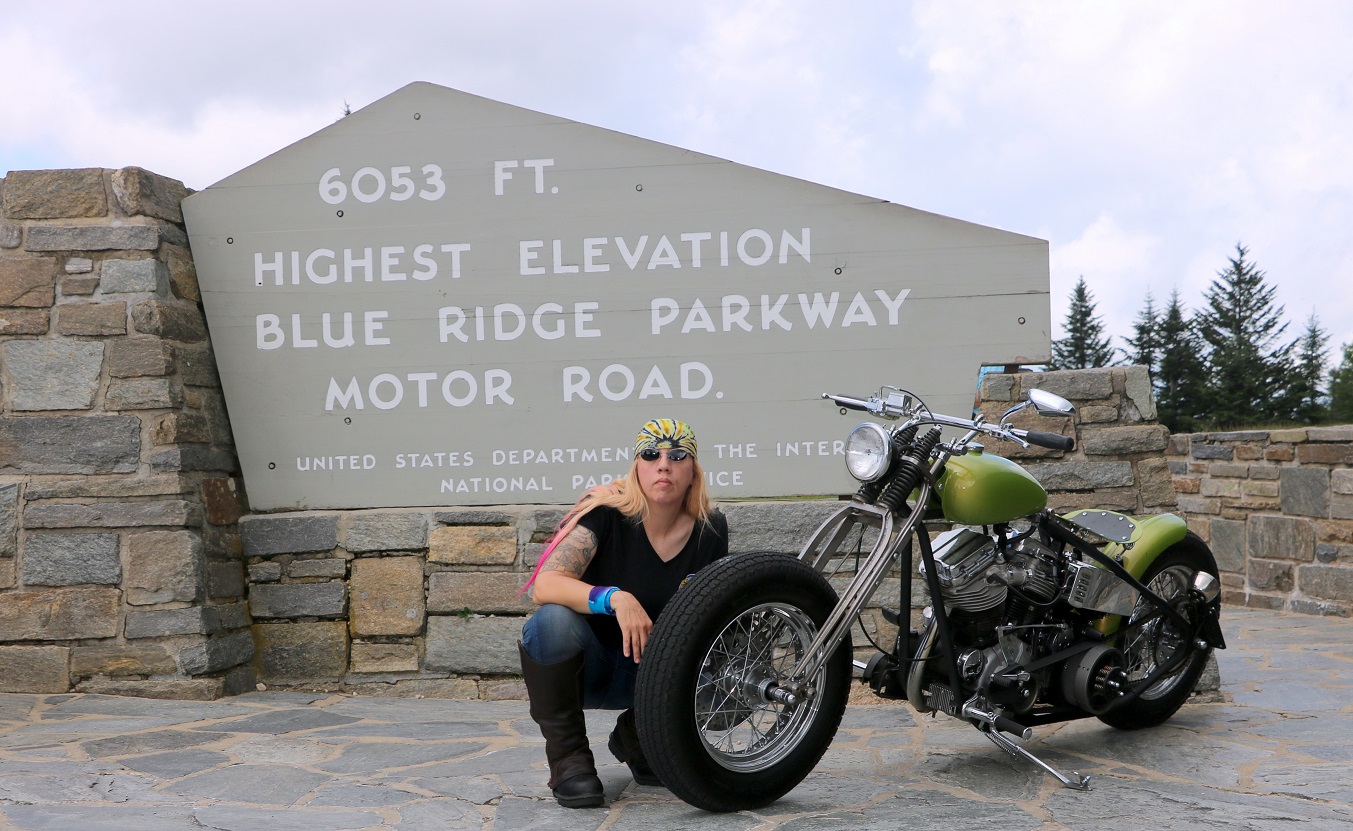 We spent most of our time on the interstate so that we could spend more time riding in the Smokey Mountains.  Once we got to North Carolina, we stayed on the Cherokee Reservation. Cherokee is the starting or exiting point of America’s favorite scenic drive – The Blue Ridge Parkway. It consists of 469 miles that follows closely the highest ridges between the Shenandoah and the Great Smokey Mountains National Parks. I am not easily impressed, but riding on The Parkway has got to be one of the greatest pleasures I have ever experienced. 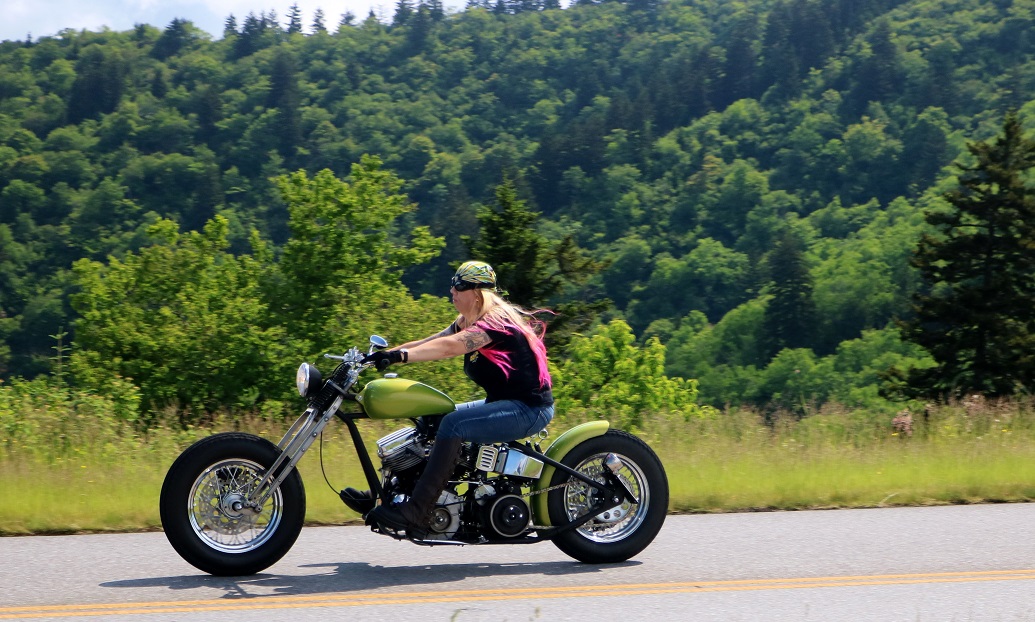 Riding on such pristine, well maintained roads, where the speed is limited to 45 mph and the scenic beauty actually brings a tear to your eye was unbelievable! The gorgeous flowers, shrubs and bushes alongside the road were breathtaking! The road is intended for people who want to take a leisurely ride or drive while not being in a rush so that you can enjoy the scenery. Seeing the morning fog rise over the Smokey Mountains in the early hours is something that I won’t soon forget. The highway flows in such a way that it truly is captivating, heart pounding, magical and ADDICTIVE!  I would love to go back and ride the entire 469 miles – maybe next year on my 1939 Knucklehead!

The Smokey Mountains seem to have their own weather where it tends to rain every day. On the first day had to ride down the mountain for over 20 miles, without a front fender!!!! I don’t normally ride in the rain with an old bike, but the rain wasn’t getting any lighter and I HAD to get off of the mountain. Once we got back to the motel at Cherokee, my husband realized that the rear axle bearings were going out on my Panhead. Since the rain had changed our plans, we went to “Wheels Through Time Museum”. We got there a few hours before closing time and there was so much to look at that it was very overwhelming. As they were closing I decided to buy a Knucklehead sticker and patch for my jacket. While I was inside talking to the ladies at the counter and buying tickets to win the 1948 Panhead that they are giving away this fall, Gabe was outside talking to Dale Walksler, the museum’s curator. He told Dale that we were on our way to Rockingham and that my bearings were bad. Dale proceeded to have Gabe follow him back into the museum, took him over to the exhibit “Chopper Graveyard” and GAVE him the parts that my bike needed. While passing through the gift shop, Dale also grabbed a DVD and threw it in my bag free of charge! WOW, what a place and what a terrific man for helping his fellow rider! 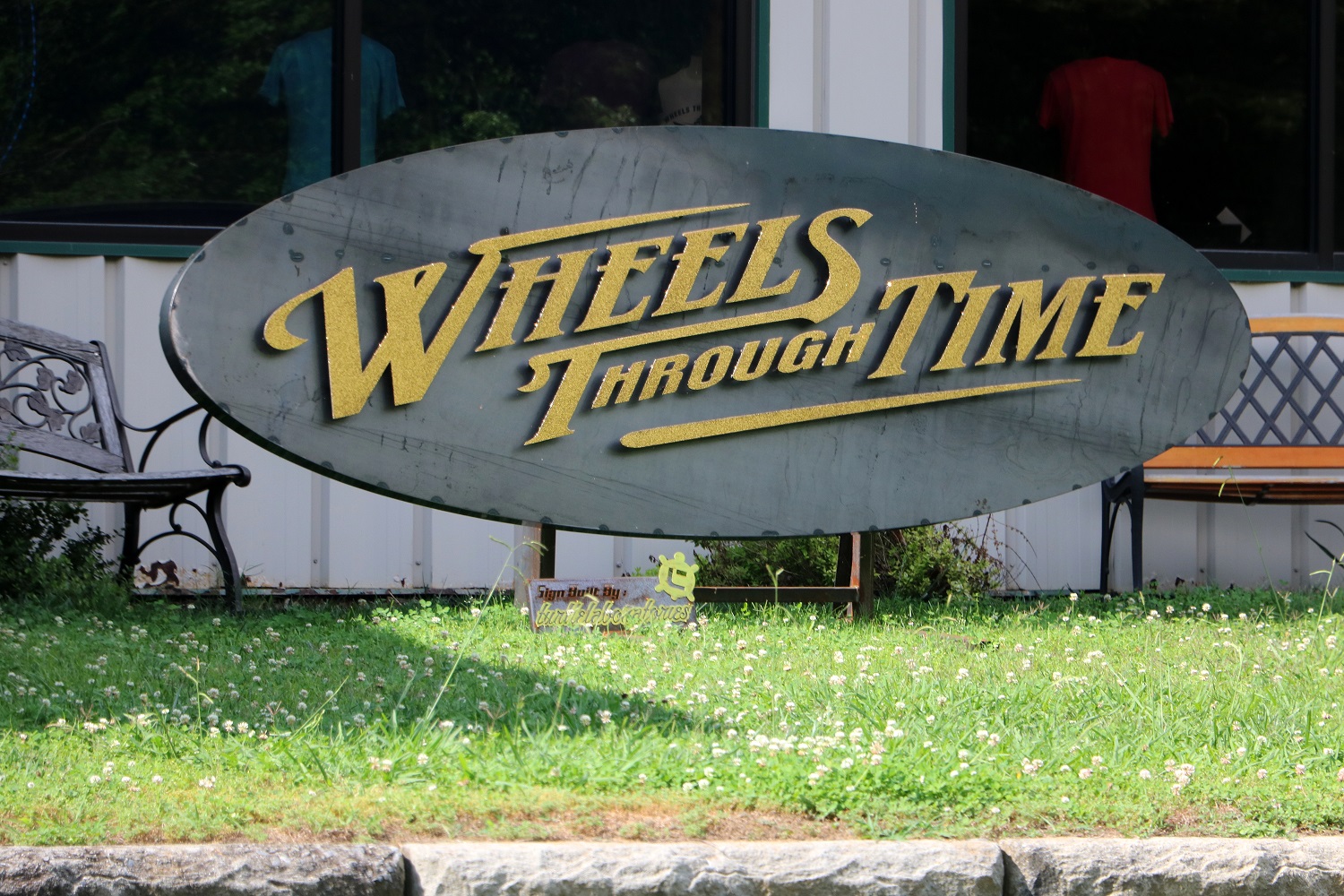 As we proceeded to roll into Aberdeen, which was about 25 miles from Rockingham, we saw that the bearings weren’t my only problem as I had also lost a front axle nut! Since we had a chase truck we did take some extra parts in case of breakdowns, but alas I did not expect to lose an axle nut! Our only hope was to drive to a hardware store and hope that we could get one. When we arrived at the local Lowe’s, our hopes were high but were soon shattered as the 3/4 fine thread nut was nowhere to be had. My husband is a master mechanic with over 30 years’ experience and I knew that he could fix the situation. We all had a blank look on our faces, as I wasn’t going to be able to ride my bike to The Smoke Out, after coming 1000 miles across the country. As I stood in that aisle I did the only thing I knew how to do, I prayed to GOD and asked that HE put the idea in my head to fix my bike. And just like that, he immediately told me “trailer ball”. I ran to my husband screaming “trailer ball”. Lo and behold for only $8.00 there was the solution to my problem!!!

GOD put the wisdom in my head so that I could continue my journey. We did make it to The Smoke Out but the real journey was getting there. At The Smoke Out was the usual crowd of people who go to bike rallies but mixed in were lots of cool vintage bikes. I wanted to race my Panhead but it proceeded to rain in Rockingham and those ideas were soon sent out the window. After soaking up as much of the scene as we could before dark, we got on our bikes and went back to the Marriott where we had all been upgraded to two bedroom suites due to their basic rooms not being clean when we arrived. This time we didn’t have to clutch our pistols and stay awake all night as God had shown himself once again and I KNEW everything was going to be alright. 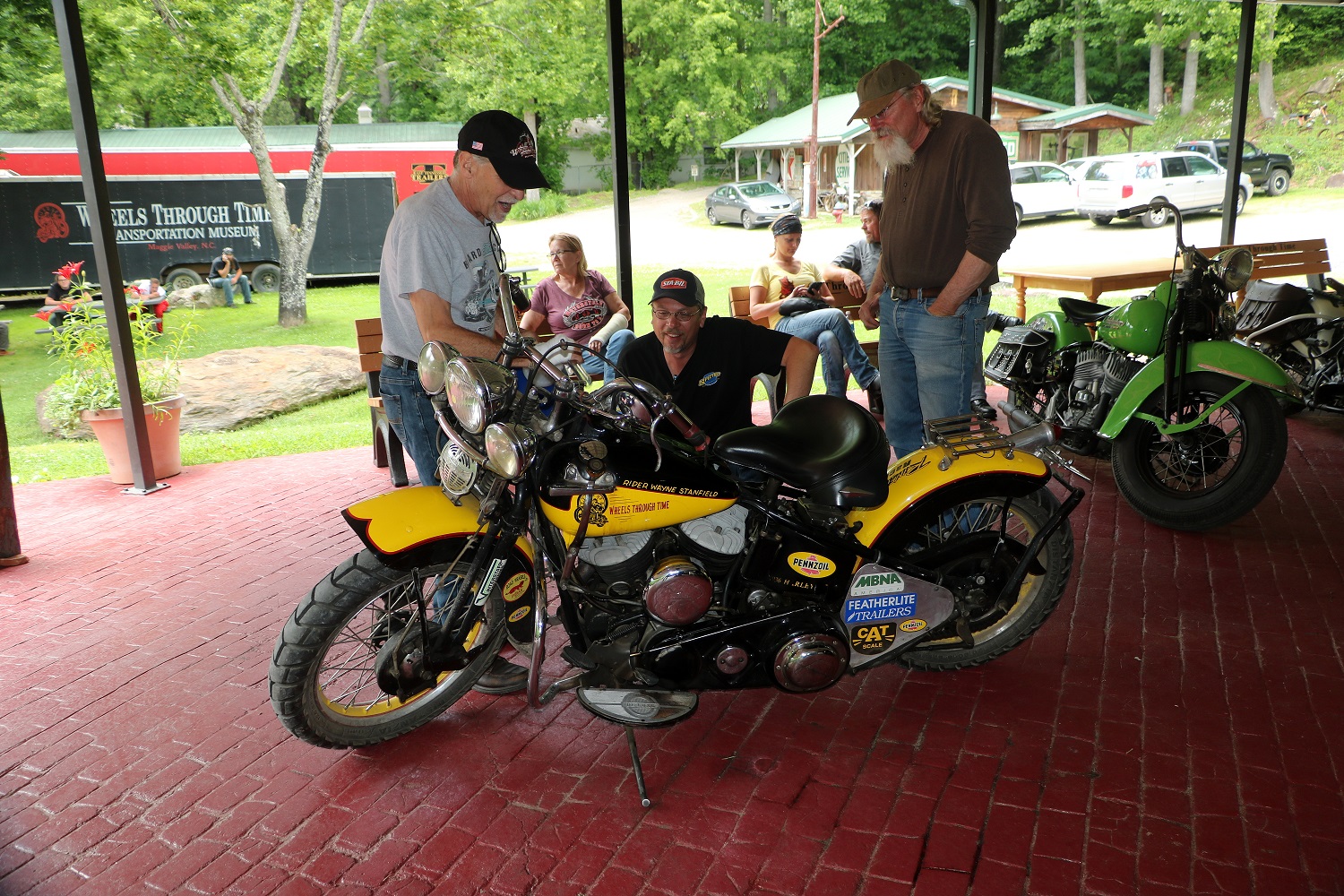 My bike leaves a lot to be desired to most people- no turn signals, no horn, no speedo, no front fender, one mirror and no seat cushion at all. This bike means the world to me – I designed it and my husband and I built it in a backyard shed. It took me over six years to build it; couponing to save money, selling practically everything I had that I didn’t need and being so frugal I squeaked! My Panhead represents everything that I not only stand for but that I also want out of life- dedication, adventure and peace. I love this bike that I call “Panacea”, which means “a solution or remedy to all difficulties”. I hope everyone can find their own “Panacea”.