The History Of The POW/MIA Flag

Russ Brown Motorcycle Attorneys®: Rolling Thunder® and the History of the POW/MIA Flag 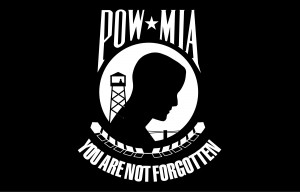 Heisley sketched several designs based on his memories as a wartime pilot. The design chosen portrays the silhouette of a man’s head with barbed wire and a watch tower in the background. Underneath the design is the motto, “You Are Not Forgotten.” The flags were manufactured and distributed after receiving approval from the National League of Families.

The 101st Congress officially recognized the POW/MIA flag in 1990 and under Public Law 101-355, designated it as “the symbol of our Nation’s concern and commitment to resolving as fully as possible the fates of Americans still prisoner, missing and unaccounted for in Southeast Asia, thus ending the uncertainty for the families and the nation.”

National POW/MIA Recognition Day is the third Friday of September. The flag flies over the White House every year on this day and is the only flag, with the exception of the American flag, to have ever flown at the White House. The flag also flies, continually, over the rotunda of the Capitol. The flag‘s message is spread through its visibility.

Since their incorporation in 1995, Rolling Thunder®. has operated by the watchwords, “We Will Not Forget.” They are an organization committed to bringing full accountability for the POW/MIAs of all wars, by increasing awareness of this issue to the government, the media and the public. One of their biggest public reminders is the annual Rolling Thunder® Demonstration held in our nation’s capital.

Every year since 1988, the venue for the Rolling Thunder® Demonstration has been Washington D.C. on Memorial Day weekend. This year, the Ride for Freedom will take place on Sunday, May 26. The ride will start in the parking lot of the Pentagon and end near the John Ericsson Memorial and will honor Sgt. Bowe R. Bergdahl who was captured by Taliban insurgents on June 30, 2009 and remains in captivity somewhere in Afghanistan to this day.

For more information and to find out how you can get involved visit https://www.rollingthunder1.org/ 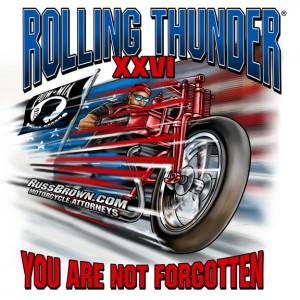