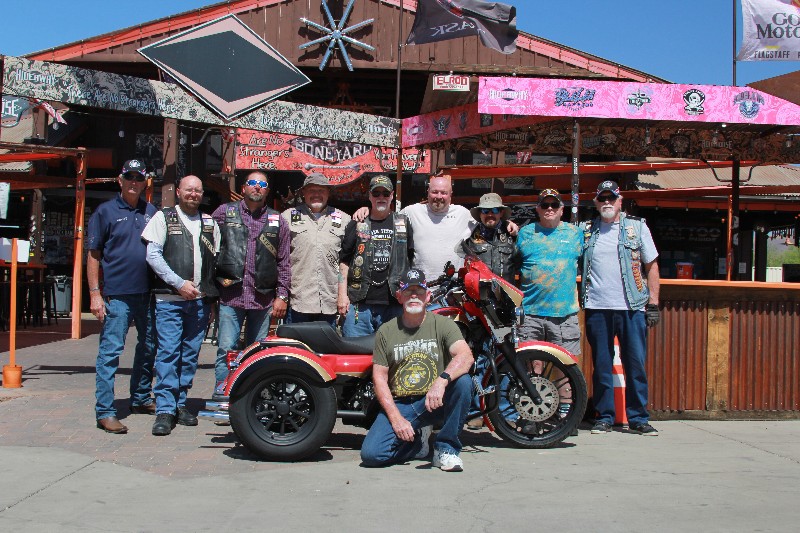 It may surprise you that people in the military– whether active, reserve, or veteran– get interested in motorcycles at a higher rate than the general population. For me though, personal experience has shown this every time I’ve gone to the VA hospital for an appointment; the motorcycle parking area is chock full of everything from commuter bikes to big touring Harley’s.

This also means that motorcycling is a hobby frequently lost by our nation’s veterans when they are wounded in combat. After losing a limb or having serious internal injuries, the long road to recovery becomes a central focus. “Will I ever be able to ride again,” starts out as, “I have to learn to walk again.” This long recovery can easily leave former passions and hobbies collecting dust in the corners of the mind.

But it doesn’t have to be that way.

John “Hard Charger” Barker knew this instinctively. A Marine Corps veteran himself, he was inspired to give the joys of riding back to combat wounded veterans when he founded Combat Hero Bike Build. Doing just what the name implies, John partners with builders, sponsors, and wounded veterans to take donated motorcycles and adapt them to overcome physical limitations that might be keeping someone from riding.

Combat Hero Bike Build goes even further though, creating turn-key customs that could be entered in a bike show the moment they are given away. Some bikes just need kickstand modifications or hand controls, while others are complete trike conversions or

sidecar builds. No matter the need, John and the builders he works with create one-off masterpieces, even going so far as to provide veterans with riding gear and roadside assistance packages. The team even makes the actual delivery of the bike into something special, doing things like finding the combat medic who saved a veteran’s life and flying them out to hand over the keys. Healing is a process, and long after the flesh and bone have mended, one of the best things that can be done for a veteran’s health is to remind them how important they are to so many people, and how their sacrifice will never be forgotten.

When asked how it all got started, John Barker remembers it like this: “In 2013 I got invited by a Run For the Wall [an annual pilgrimage from all parts of the country to the Vietnam Veterans Memorial in Washington D.C. event. They asked me if I’d go down to [Marine Corps base] Camp Pendleton and help put on a motorcycle show.

“I was on the board of directors with Run for the Wall at the time, so I go down there to put on this motorcycle show and the Marines coming to the show are wounded. These are my brothers and I’m showing them machines that they can’t ride. So I went back to the board of directors and I said ‘this is what I wanna do’, and they said ‘go ahead.’ I called up a buddy [Ray McDowel] out in Texas the next day and we got to work.” 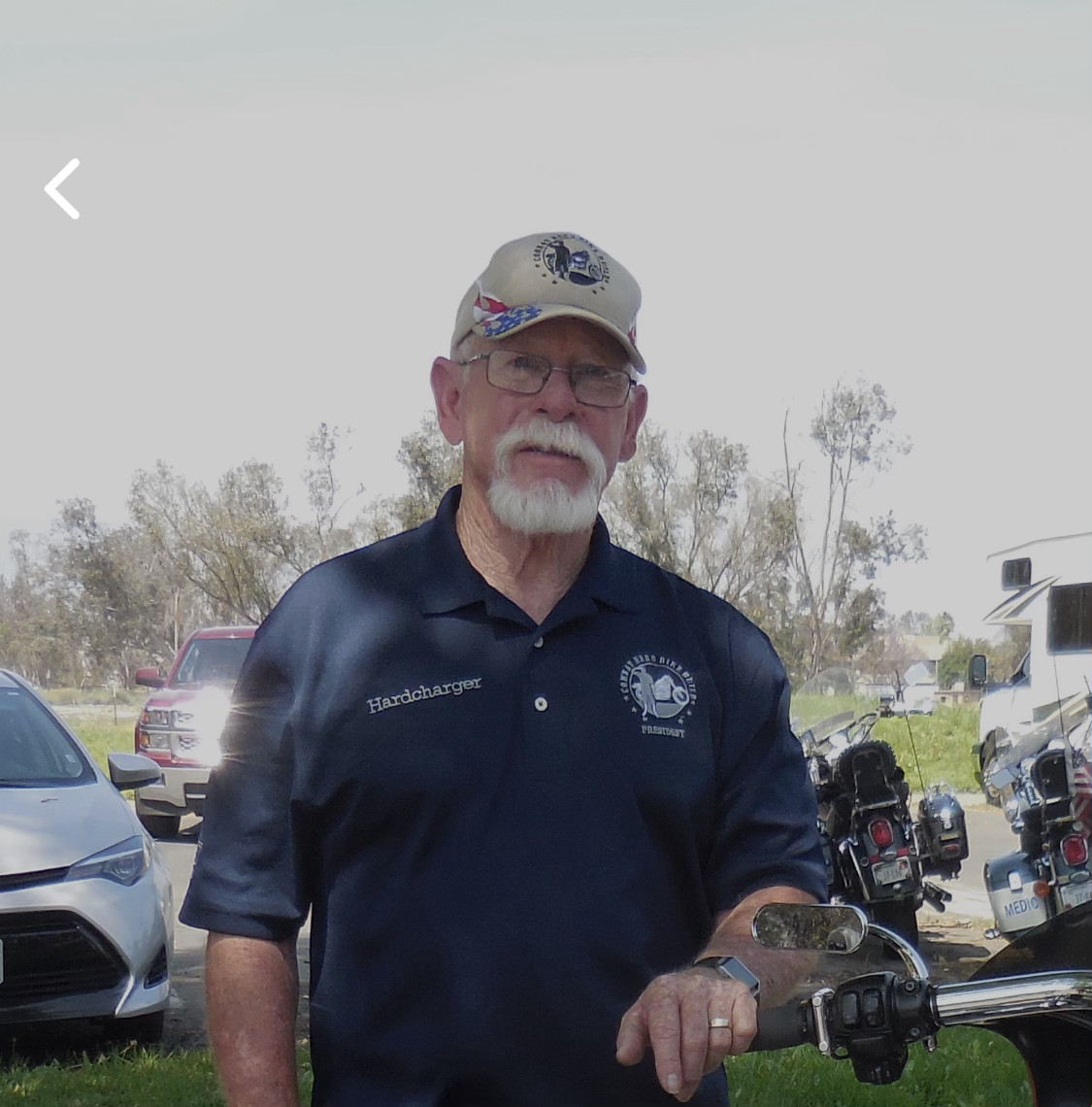 As you might imagine, John lives up to his road name of “Hard Charger,” and things took off relatively quickly. Within a year the project had broken off from Ride For The Wall and was taking on its own form, with the mission of giving the joys of motorcycling back to combat wounded veterans from all branches of service, from any conflict America, has fought in.

It sounded to me like Hard Charger had gotten the idea and started executing, letting the plan develop as he went, whereas most people spend a lot of time in the planning phase before they execute anything. When asked about this, John said, “That’s correct. One of the movers and shakers before we started, about the year before, I don’t remember how we got involved in it, but this Gunnery Sergeant– he was a triple amputee– down in southern California.

“He was building a motorcycle with a sidecar and he needed help. So Ray and I donated $6,000 to that. Um, Gunny Myers, that was his name. And so that plus what I was seeing down at Camp Pendleton… from those things I said, let’s start doing this ‘stuff.” […] In those first couple of years I was actively looking for people to build motorcycles for. Ray was hustling donations as best he could and I was doing every car show, bike show, bake sale… anything I could do to raise funds for it.”

“…my job is to make grown men cry, and I’m getting pretty good at it.”

Now that word has gotten out, John doesn’t need to actively search for deserving veterans. If anything, he has a backlog. Despite having multiple custom builders teamed up with Combat Hero Bike Build, the number of veterans who survived grievous wounds has increased thanks to better battlefield triage, improved armor, and faster transport from the combat zone to the rear lines. This beats the hell out of sending soldiers home in flag-draped coffins, but caring for the wounded means far more than just healing wounds: staying alive is not the same as living a life.

John also has the organization’s website set up so people can nominate a veteran they know for a build. Most veterans are notoriously humble about their service. Those who served to say the vets who were wounded are the real heroes, and wounded veterans say the ones who didn’t make it home are the real heroes. That can make it difficult for a vet to nominate themselves. John has made it easy, just, “go to our website, combatherobikebuild.org and there’s a little application place. Fill out the form and submit it. What we do limits ourselves to veterans that have lost limbs or have other deformities from combat, and they need our help. In other words, they can’t just walk into a bike shop, buy a bike and get on it and ride it. It has to be modified for them. So if they meet those criteria, that’s that and away we go.” 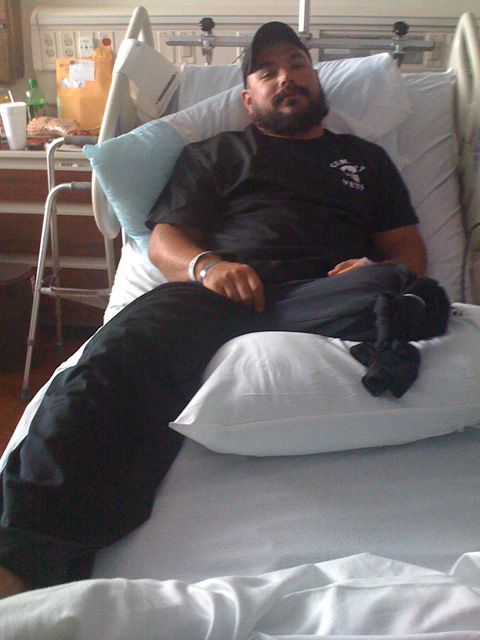 While the builds primarily start out as year-2000 or newer Harley-Davidsons, any donated bike in good mechanical shape can be considered, though cruisers and touring

bikes are definitely preferred. Getting a veteran out of the house and into the wind isn’t just about therapy either. Yes, motorcycling is shown to reduce stress, but it also gives people a way to connect with their friends and to share the adventure of exploring back roads, new towns, and meeting new people.

Before World War 2 it was general practice for wounded soldiers to retreat from public and even face ridicule for their physical wounds. Not only is that a terrible way to treat a combat veteran, but it effectively removes their story from wider society. It does America’s youth a great service to have them meet veterans and learn about military service from someplace other than the recruiter’s office. A chance encounter at a gas stop or a rally can help people form a more complete view of what military service means, both good and bad. But you don’t have to be a wounded vet or even know one personally to make a difference. Since Combat Hero Bike Build is a registered 501(c)3, donations are tax-deductible. Don’t feel like donating? Buy a hat or T-shirt from their online store and tell anyone who asks where they can donate or get a shirt of their own. It’s also easy to sign up to their mailing list: the form is at the bottom of their webpage.

Staying updated on the latest happenings means you might be able to ride out to see one of the bikes delivered, or to escort a veteran on their maiden voyage on a newly built custom. At the very least you can stay tuned as to the progress of builds and fundraising, or even find an event where Combat Hero might have a booth set up.

With such a unique mission and a nationwide reach, there are numerous ways to get involved, and while we don’t really need an excuse to ride, it certainly adds to the joy when you are riding for a reason.

“If you have been involved in a motorcycle accident, don’t let it steal your freedom! Call 1-800-4-BIKERS to learn how an experienced motorcycle accident lawyer can get your bike fixed, money for your medical bills and compensation for your pain and suffering.”