While talking with Allan Lane about his many projects and adventures in the motorcycle industry, it quickly became obvious that the only way to do his story justice would be a two-installment interview. If you haven’t read Part 1 of our interview with Allan Lane, aka Mr. Black Moses, definitely give it a read.

Allan, who is a serial entrepreneur and lover of all things motorcycle, decided early on that the best way to afford his passion for motorcycles was to make a job out of being in love with two wheels. This has taken many forms, from creating and managing the Sportbikes Inc. online magazine to creating and hosting events around the country. We pick back up with Allan’s story circa 2010 when Allan has just come off the success of his first major event, Clutch Control.

RBMA: “So how does it come together? Like, you had this event [Clutch Control] that takes off and you’re doing emcee work, but then you launch an online magazine.”

AL: “[…] Well, I already knew I could do more in the industry than being behind the counter, selling parts, and once I knew this was in my blood– I’m a part of it and it’s a part of me– I knew I had to make it more than just a hobby. Especially when I realized this is an expensive hobby, I needed to make it my job.

“So when I was able to broaden my horizons and to be a part of events, and travel, the opportunities kept popping up where people were asking for my opinion on things. You know, ‘hey can we send you this thing and can you write about it, tell us what you think of it,’ all of those things culminated into me being a contributing editor for 2 Wheel Tuner magazine.

“Now, 2 Wheel Tuner was a great magazine, and of course it went by the wayside. […] It was around May or maybe April, of 2010, and it was kind of like the same thing when I was working for [Eraldo] Ferracci, when I moved on it was like, ‘I can keep doing this, I can do my own thing.’ Just because this magazine is going away, does that mean I have to stop?” Instead of looking for another gig as a writer, Allan took a big step, spending the rest of the summer putting together the first issue of Sportbikes Inc., launching in October 2010. Allan also had the foresight to predict the slow death of print magazines, or at least he saw the overhead costs in printing and distribution, as well as the space limitations, of print.

RBMA: “And the magazine has its own angle. How’d that come about?”

AL: “[…] I feel like I play the role of bringing the people from one side of the room, and getting the people from the other side of the room, and bringing them to the middle and getting them to talk. […] And that became part of the magazine. To have, you know, Joe Rider from up the block, in the same magazine as Valentino Rossi. That’s what Sportbikes Inc. is… it’s the incorporation of all of sportbikes, the lifestyle, you know, what I call ‘moto edutainment.’ We will educate you, we will entertain you.

“And that comes through in the features. Having featured riders, giving spotlights to local bike clubs, and on the same pages doing MotoGP reviews, bike reviews, having real products, real conversations about how to improve your skills.

“And so every year when we’d host parties like I would have my annual MotoGP party. We would have team principals, and the riders couldn’t always make it: sometimes they did, but hey, they had work in the morning. But we would have, on Friday [usually the first day of a race weekend for the top riders, when practice begins], a MotoGP jump-off party, […] and it became that party. I’m very proud of the fact that I got people who may not normally be in the same room– not just in the same room– but talking to each other.”

“I feel like I’ve settled into who I am.”

And that can be an important part of motorcycling. While we tend to draw ourselves into smaller and smaller cliques– cruiser riders become American vs. Metric, then Indian vs. Harley, then 1%er vs independent, etc.– motorcycling can also allow a lot of cross-pollination. Riders can be doctors and lawyers as well as journeymen or mechanics, and they can end up at the same BBQ joint on a Sunday, rubbing elbows with tattoo artists or motorcycle vagabonds living off an odd job here and there. What matters is they all ride. 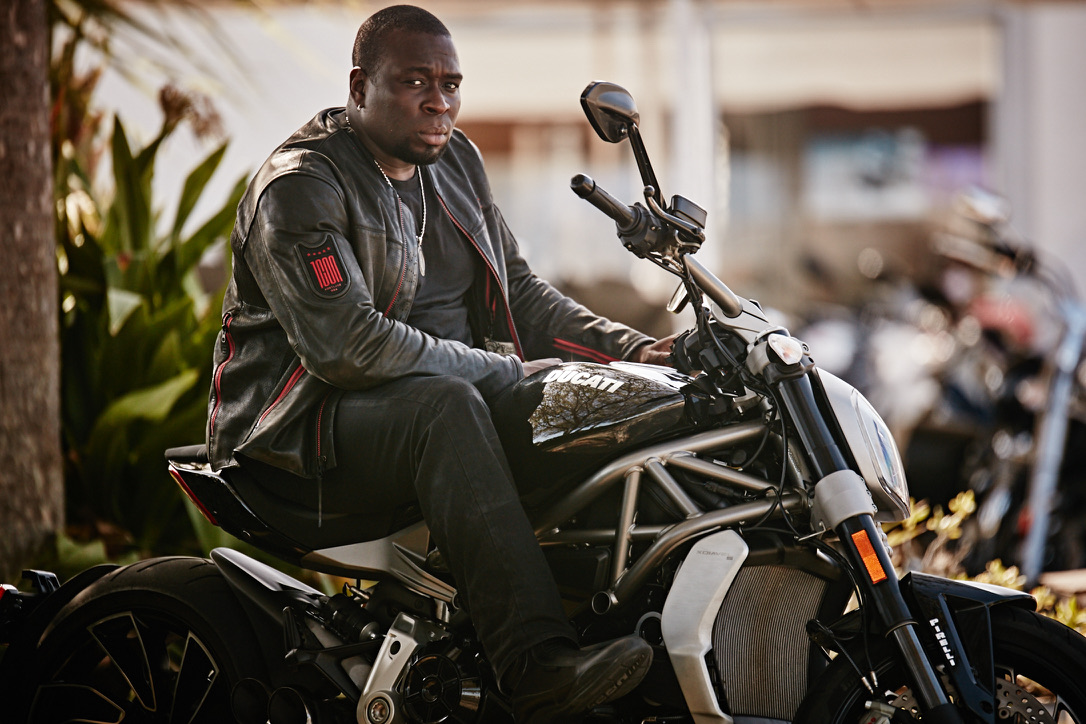 And it would have been a disservice if I just asked Allan about his industry contacts and business ventures, we definitely had to talk bikes at some point. One interesting exchange happened when we talked about how many track riders stop riding on the street.

RBMA: “So a lot of people who move from the street to the track find it way more fun, and then they stop riding on the street. So what keeps you on the street?”

AL: “I’m a motorcyclist. I’m a rider. I’m not a fan of cars. Well, I won’t say I’m not a fan, but I enjoy the freedom [of motorcycles]. If I have to go from point A to point B I want to go the most fun way I know-how. […] And I’m not hating on anybody who makes that choice [to the only ride on the track]. Some people do it… to save their own lives. Some people realize, ‘I do some really dumb $#!& on the street. Maybe I need to save that for the track.’ And I applaud that. I respect that level of maturity.

“But for me, riding on the track is where I get my rocks off, so to speak, so when I’m on the street, I’m more reserved. I feel like there’s a time and a place for everything. So when I ride [on the street] I don’t need to get the hell outta Dodge on every ride. […] I go to the track for that.”

RBMA: “I ran into that [too], after years and years on the track, I never wanted to stop riding on the street, I just stopped riding fast on the street. Like, I appreciate the power and the small size so I can shoot gaps, and in California, I can split lanes. But if I’m taking a bike out for sheer pleasure, it’s to a road where I can get some lunch and see some views.

“Or it’s a thousand miles away and I have to deal with a lot of straight interstates to get into new areas.[..] And to be honest, not everyone appreciates an awesome, 100mph wheelie, so maybe I shouldn’t be doing that on the morning commute.” 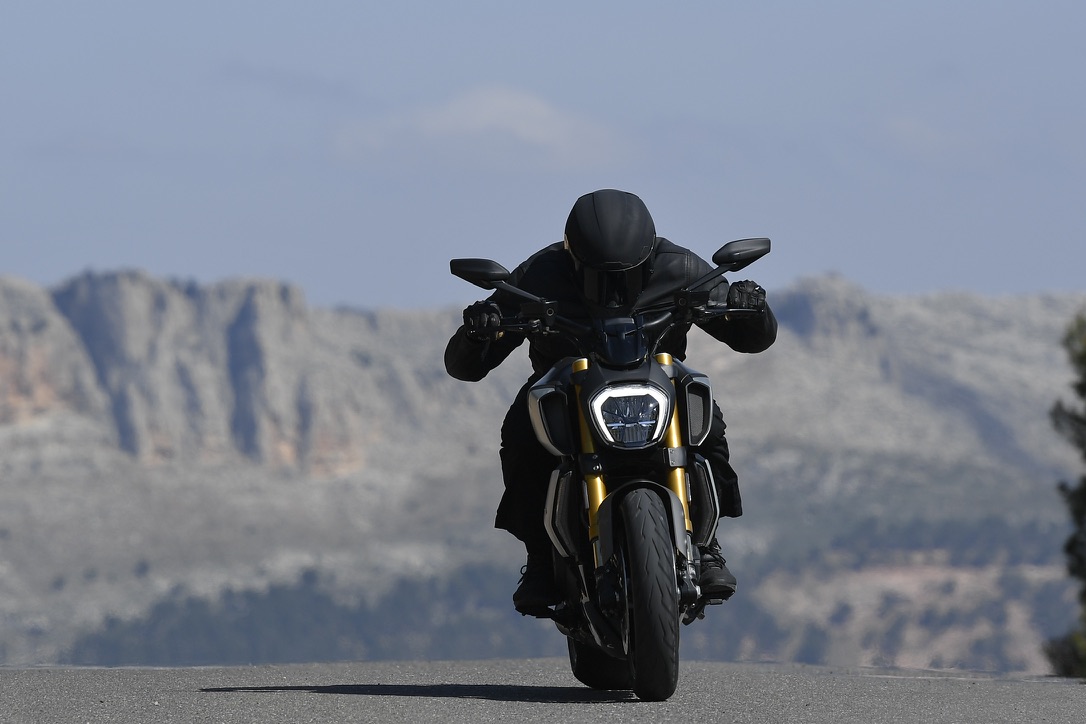 AL: “[Laughs] I completely agree with you. For me, my [Ducati] XDiavel is that bike where there’s plenty of get-up and go, and if I need to drop the hammer and get the #%@$ outta Dodge I can do that. That bike moves. It does everything I need it to do. But when I just want to cruise and chill, that’s the bike that allows me to do that. […] And I’m 45, I’ve got a beautiful wife, a son, and I gotta come home to them. I gotta come home.

“Life is hard. You have to be harder than life.”

RBMA: “Speaking of coffee, how did you decide to do [your own] coffee?”

AL: “Yeah, the funny thing is, when I met my wife and asked her… I asked her out for coffee. But I never actually took her to coffee. So now every day, every morning, I’m making coffee for my wife [laughs]. […] But really, I did my research, and I already had a couple of connects– roasters and such– so Monday/Tuesday I did my research. Wednesday I made my decision, decided how the website was going to look. Friday, the site was up.

“Monday I think I said something on Instagram and Facebook like, ‘hey everybody, please check out hardknocksmoto.com. If you like coffee, your boy Black Moses is making his own roast.’ And in the first week, I sold a ridiculous amount of coffee… just based on my name alone. It was my deal, it was… everything. The branding, the T-shirts, the mugs the names of the roasts: everything just kind of work. And the first week, we just hit the ground running.”

It helped of course that it was really good coffee. People came back to buy more, so this obviously wasn’t just about branding and having a cool logo. And that seems to be a centerpiece for everything Allan does. When the spark of inspiration hits, if there isn’t an instant flame of creativity following it, he doesn’t keep going. But if the flame lights, it spreads quickly. The podcast was a similar story. Allan chose to call it Life In The Fast Lane, and it runs more as a stand-alone series instead of being directly connected to Sportbikes Inc. or Hard Knocks Moto Entertainment.

AL: “It started about two years ago. I was a guest on chef Brian Duffy’s podcast. We did the show and had a blast, we talked about food and bikes, and after that show dropped, the producers there at Radio Influence asked me if I wanted to do a show.

“I said yes, and it happened like that. It had a lot to do with me having my network of friends and family, in the industry, that I could talk to. I could get guests, and we could have quality content…quality conversations. There wasn’t a lot of rocket science involved in that one. It was more the right things happening at the right time, and that’s how Life In The Fastlane, the podcast, came to be.”

RBMA: “So what keeps you doing now?”

AL: “Right now I’m in the middle of reevaluating it. Making it into something that serves a higher purpose than just, shooting the $#!& for 45 minutes to an hour. I mean, the numbers have been great, the downloads are great. But I’m at this point where… there has to be more. So right now it’s on hiatus.

“You can talk to everybody and, in the end, is it making a dent? So I’m figuring out how I can be a better citizen of the universe. Considering the climate we are in right now. It’s tough to have a ‘shoot the $#!&’ show, when there are so many people shooting.”

“…so I’m figuring out how I can be a better citizen of the universe.”

And so a life lived in the fast lane continues. Allan juggles a lot of different projects, but when things inspire you it’s hard not to pursue them. Some people leave solid day jobs to build custom bikes in a dimly lit garage. Others start jobs working in a new realm of the industry because they believe in what the company is doing.

You can love motorcycles and make them a bigger part of your life by finding a natural way to express your passion for two wheels. For Allan Lane, being Black Moses is a full-time job… one he wouldn’t trade for anything. Be sure to follow his adventure in life by signing up for the mailing list at Sportbikes Inc. (scroll down and watch the right-hand side of the page for the free sign up form), or following his very active Instagram page.