Before I met Jenny, all I wanted to do was meet Jenny. She was my first and only Instagram idol. The minute I got Instagram in 2013, the first people I followed were girls that rode bikes. There were only about 4 of them that were continually posting being on bikes, going on rides, and just having a cool biker attitude and style. I hadn’t owned a Harley yet and thought that these girls were so strong and badass on their big bikes.

Jenny was out there with her sparkle panties, a line of colorful sequined panties that she and all her friends wore on their motorcycle trips, traveling all over the West Coast. I was so jealous of their lives and thought their crew was so amazing. I hadn’t had any other women to ride with yet.

After following Jenny and her crew for some time, I eventually met them. Back then, there really weren’t many women riding and posting about it on Instagram, so friendships were easy to make. There was a biker party down in LA and I went up and introduced myself to them and since then, it’s history! We have traveled together in Utah, rode around the Oregon Coast, frolicked many many consecutive Falls in Joshua Tree, and even collaborated with her brand Strange Vacation.

Jenny is an extremely spiritual individual and we’ve had some really big talks at very big times in both our lives. She was the first person to visit me at my first home in California and I saw her off in her Sprinter van in Canada which she lived in for over a year. 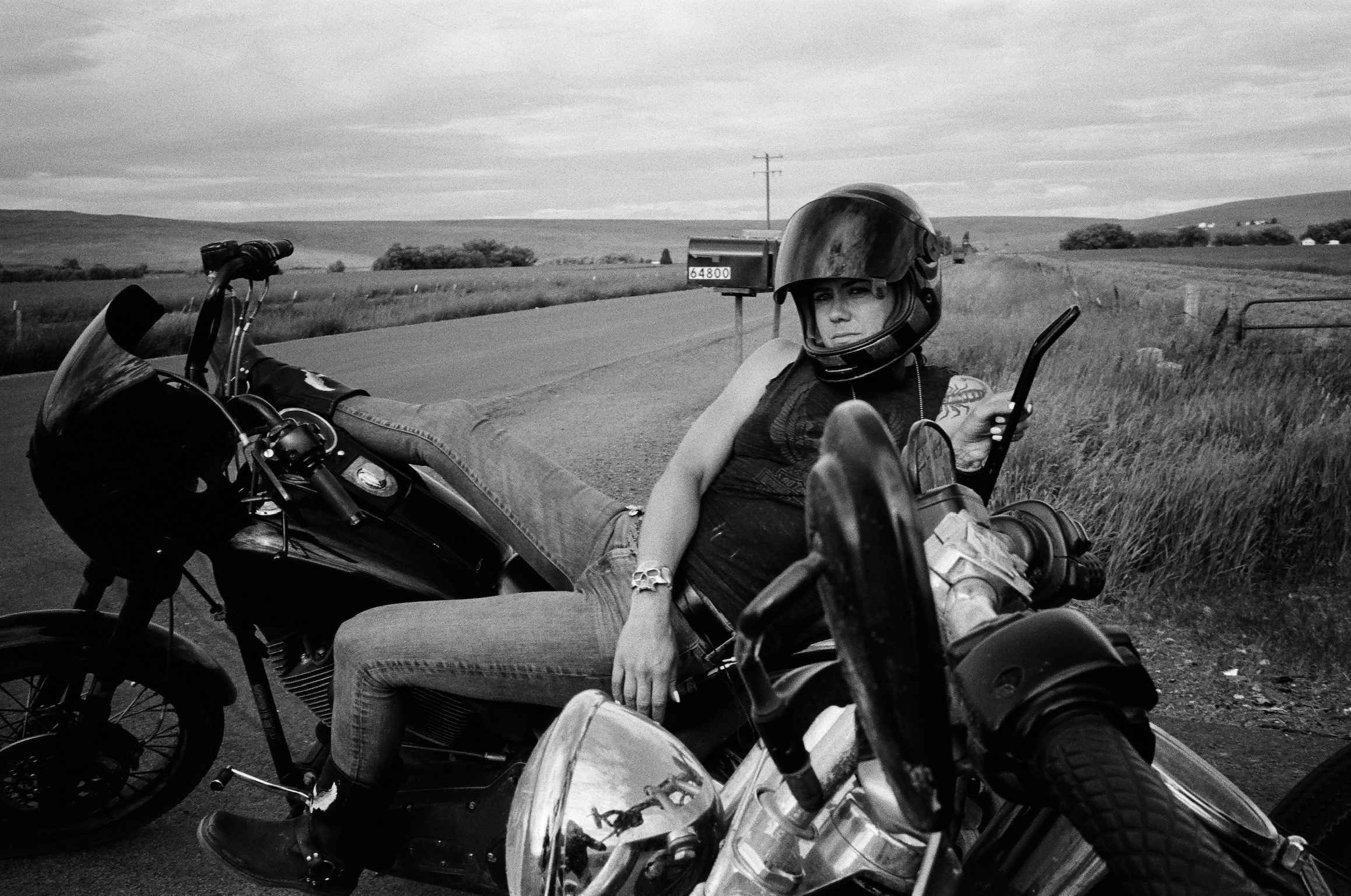 When Russ Brown was looking for some interesting individuals to blog about, I thought of Jenny right away. Jenny has been a staple in the women’s motorcycle culture, from her influence to her brand to her attitude and beyond. Although she is now changing her vision away from Instagram and being a front-and-center biker girl, there is a lot to learn from her and her lifestyle. The self-proclaimed Queen of Nowhere hasn’t stopped wandering since I’ve known her and I’m sure there’s a lot more to watch her do. Surprisingly this is the first time I have ever interviewed Jenny. Here’s what she has to say these days:

Who are you and where are you from?

My name is Jenny Czinder (aka Hookers and Popcorn) and I’m not sure where I’m from anymore.

I grew up in a small town in Iowa, lived in Portland, OR for the majority of the time since I left when I was 23. About 3 years ago I left Portland and have been a nomad ever since, cruising around West America in my van with my dog, Lala.

How long have you been riding bikes?

Damn… I haven’t thought about that in a long time. 8 years has gone by so fast! I still feel like a new rider in a lot of ways. Always something new to learn, more experience to be gained.

You were one of the original women riding motorcycles on Instagram and a huge influence on the women’s motorcycle movement that is happening now. Did you ever think it was going to be like this?

A photograph of a woman riding a motorcycle can be a powerful image. It embodies freedom and independence in a world where, at one time, only men could play. The images of myself and many other women posted to Instagram back in like 2013 drew a lot of attention around the same time the app was just starting to blow up. Around that time there was also a new wave of awareness around women empowerment that was gaining momentum and looking back on all of that now, I can see how it was a recipe for inspiration and growth but I didn’t notice as much as at the time.

That being said, it was still clear at the beginning of all that, that the demographic of women riders was growing, and with that, we saw new brands and events starting to pop up everywhere. It was exciting to be a part of, and one of those moments in time where we I’m not sure we fully appreciated just how magical things were until they had passed. 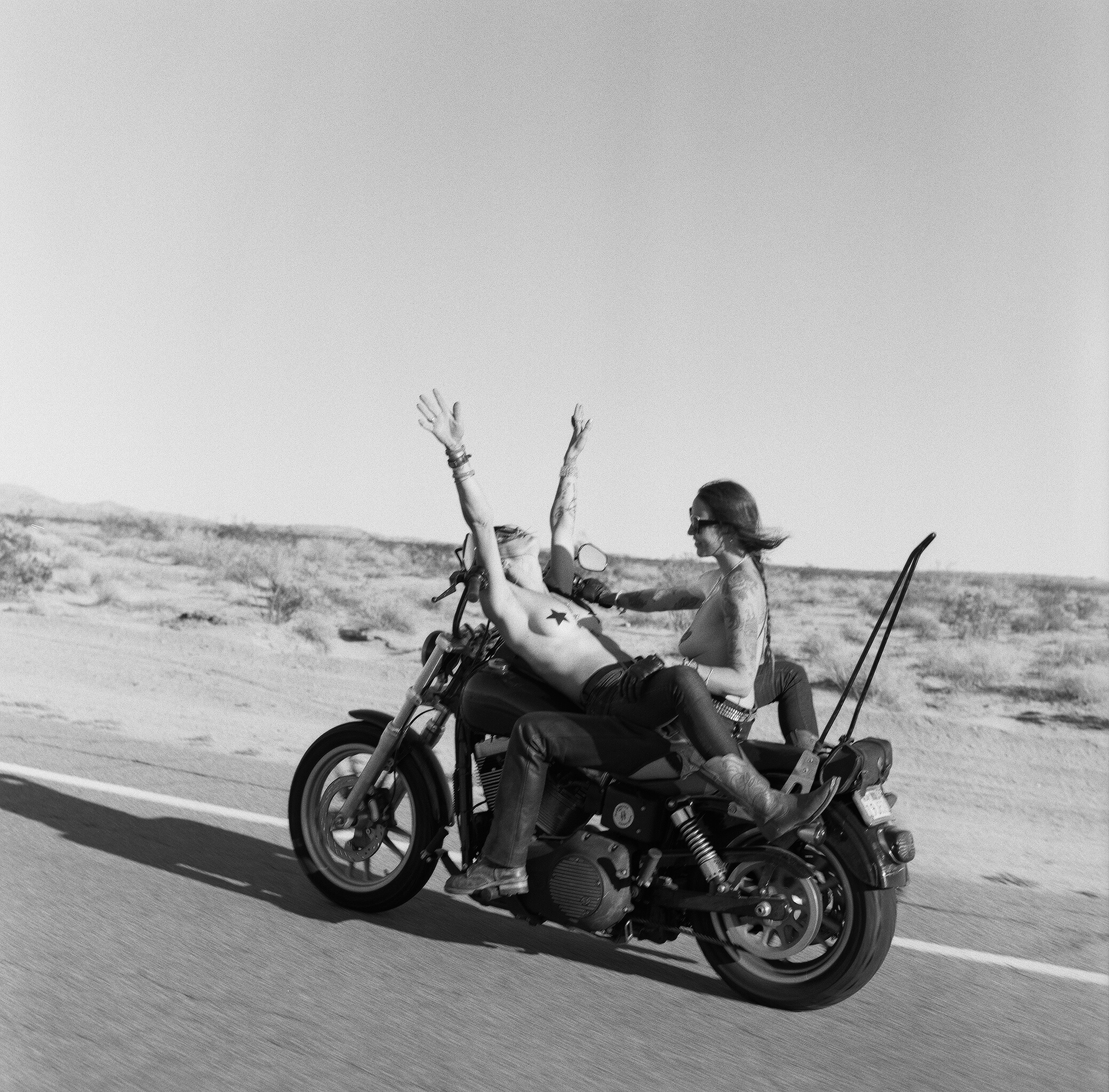 One of the iconic first images that ‘Broke the Internet’. Shot by Lanakila MacNaughton @womensmotoexhibit

What are some of the biggest trips you’ve done?

In 2015, I rode across America with a group of ladies, from Brooklyn to San Francisco. I’ve also ridden around West America so much it’s hard to keep track at this point. West America is

incredible. There’s still so much wide open space, and the landscapes and roads are breathtaking. It never gets old.

How have you seen the industry change since you started being into bikes?

When I first started riding, it was largely uncharted territory for women, so it was pretty exciting! On-road trips, people would turn their heads and stare, or come over say hi at a gas stop, in shock that women were riding motorcycles, let alone riding long distances. That still happens, but not quite as much as new women continue to enter the scene and it becomes more common to see them cruising around.

There were also people following our two-wheel adventures on social media, which became our source for connecting with other women who ride, organizing rides and campouts. Everyone was generally open arms, including the dudes, collaborating, and sharing inspiration. However, this world came with its haters, as everything seems to. Many people, even other women, would comment that a women’s place is in the kitchen, not on a bike. It was pretty outrageous to witness! Some found the photographs of me riding during that time inspiring, and others came down on me super hard, arguing I was setting a bad example for riders and for women in general. Many of the comments were brutal and it was shocking and hurtful at first, but I got over it and that negative energy quickly became a source of entertainment. Sometimes, some of us would go out of our way to create content specifically to get a rise out of those people, just because we could. The haters became our muse! Since then, which was only a handful of years ago, the motorcycle community has become saturated with women riders, and I don’t see much negativity being tossed around anymore. It’s become a lot more normal to see women riding however they want to ride, wearing whatever they want to wear, and they now seem to be widespread acceptance that women riders aren’t going anywhere 😉

As much as the industry continues to grow with new riders of both genders, much of it has yet to evolve. The big motorcycle brands, who you’d think would be trendsetters, are slow to keep up with what’s actually cool. The hesitancy to give the reigns over to more forward-thinking, creative people at the corporate level has them trying too hard where they shouldn’t and too little where they should.

I personally love it when brands evolve to inspire curiosity and exploration amongst their communities, and I think the bigger motorcycle brands are failing miserably at that. Motorcycle riders were originally a bunch of outlaws and risk-takers, and I’d love to see brands, big and small, step out and reclaim the power of not giving a fuck, like the risk-takers of their heritage once did.

All that being said, I love motorcycles and riding. And I’m obsessed with my bike [2015 Harley Nightster]. Riding is very much a type of meditation for me, regardless of what’s happening within the industry.

In the past couple of years, you’ve changed your direction – tell us about that.

I love exploring new experiences and can’t help but follow curiosity. Motorcycles were a huge part of my life for 5 solid years. I went to countless motorcycle shows, races, campouts, and rides—big and small. Over those years I had a such blast and met so many lovely people, and then the overall experience became stagnant for me. It started feeling like the same old, same old, just a different month or year, and when that happened my mind naturally shifted into discovery mode again. I started to explore other things that would challenge myself in the ways riding challenged me when I first started. The fears that surface, along with the excitement, of being a beginner at something makes me feel alive, and right now I’m experiencing exactly that learning how to sail. And even though I’ve got my sights set on the ocean and boat life these days, motorcycles aren’t something I ever see myself letting go of. It will always be a safe space for me to ground myself amidst the ever-growing noise of modern society. 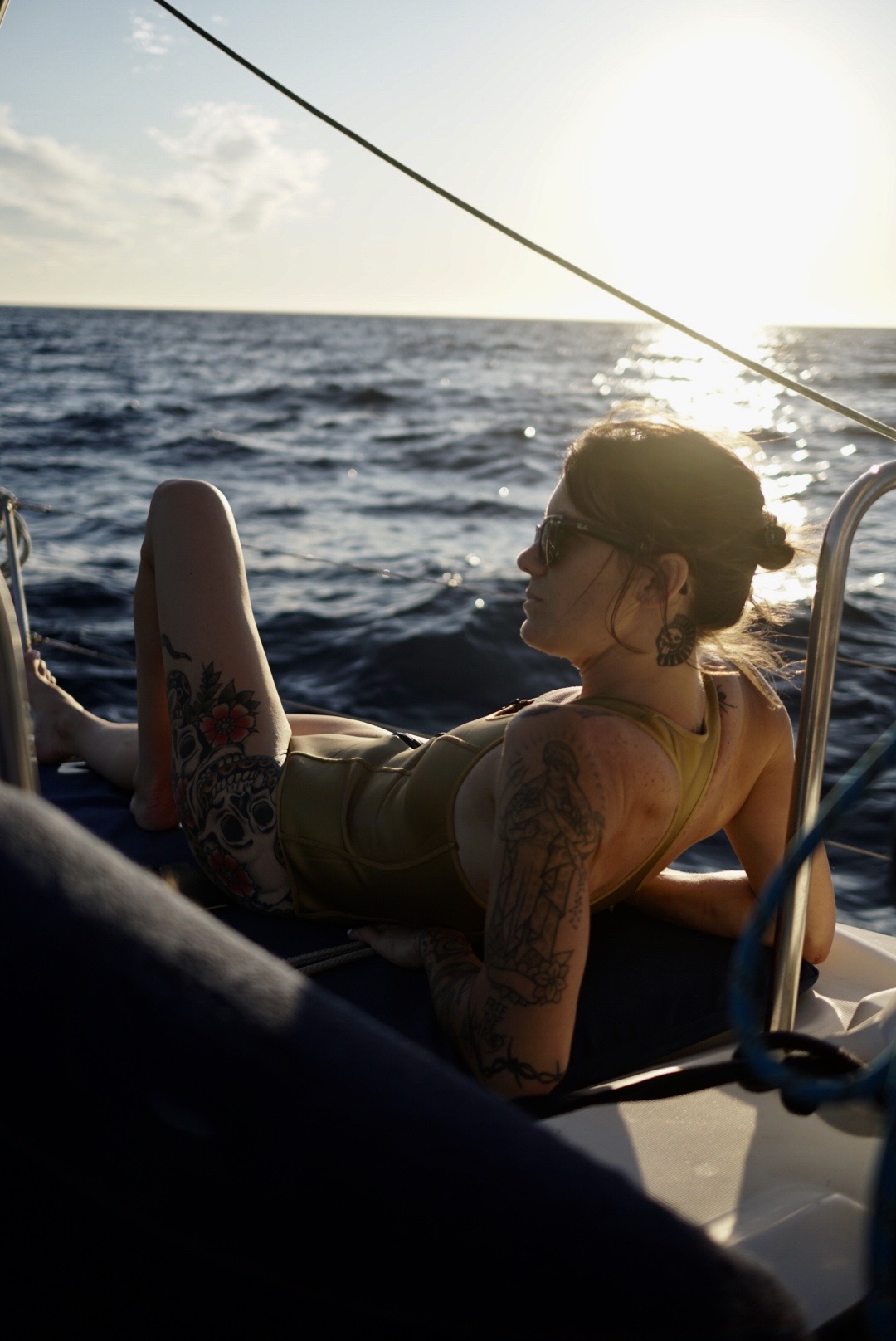 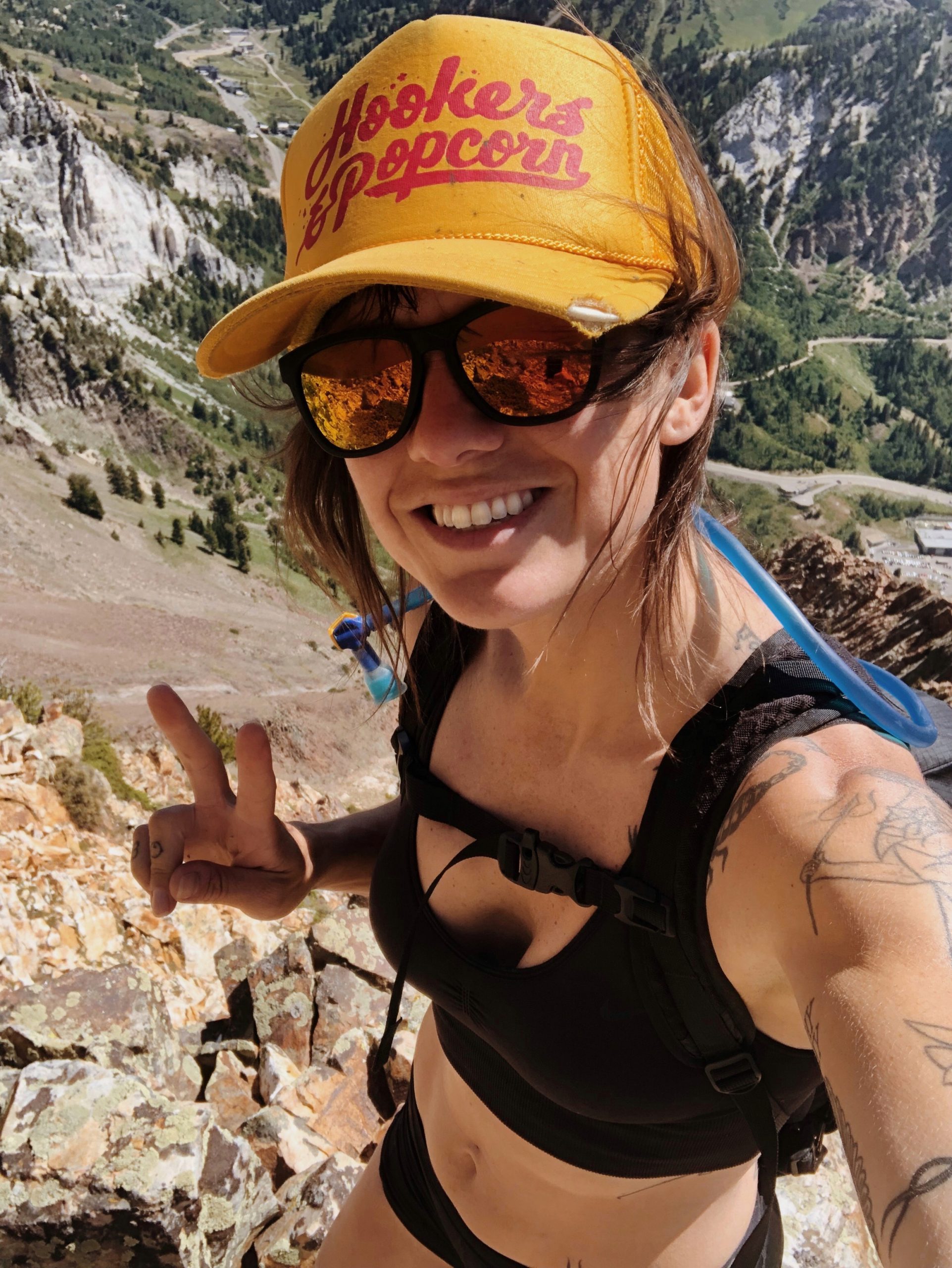 How have you been able to fund your life?

I’m a Social Media Director. As much as I enjoy the occasional influencer partnership I absolutely love working behind the scenes, lending my creativity and experience to helping others build their brands and followings.

She and I are planning on doing a ride this month in California, so stay tuned! More adventure blog posts coming! Til then – Becky