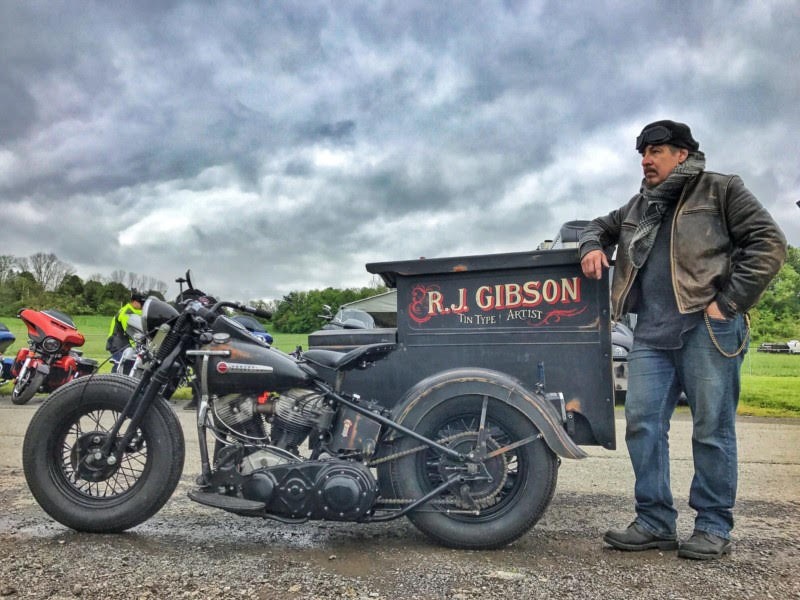 Every now and then a story comes along so fascinating I’m not sure I can do it justice. The story of Rob Gibson and the World’s Fastest Darkroom is one such story. It combines motorcycles with history, technical skill with artistry… all happening out in the real world instead of a studio or workshop.
Rob has a background in fabrication, having worked at the old GM plant in upstate New York. He also has a love of history, being drawn into old books and photos since childhood. Eventually, Rob combined these two parts of himself by building an 1800’s-style camera and learning the art of tintype photography.
These early cameras, like those around during the Civil War, had no shutters or really any mechanical parts to speak of. The photographer prepared a chemical solution that made a piece of metal photo-sensitive (usually tin, hence the name), then placed it in the back of the camera.
Then the photographer simply removed the lens cap, exposing the tin plate to light coming through the lens. He then had to rush back to the darkroom to bathe the plate in another solution, brining the image to life directly on the plate. 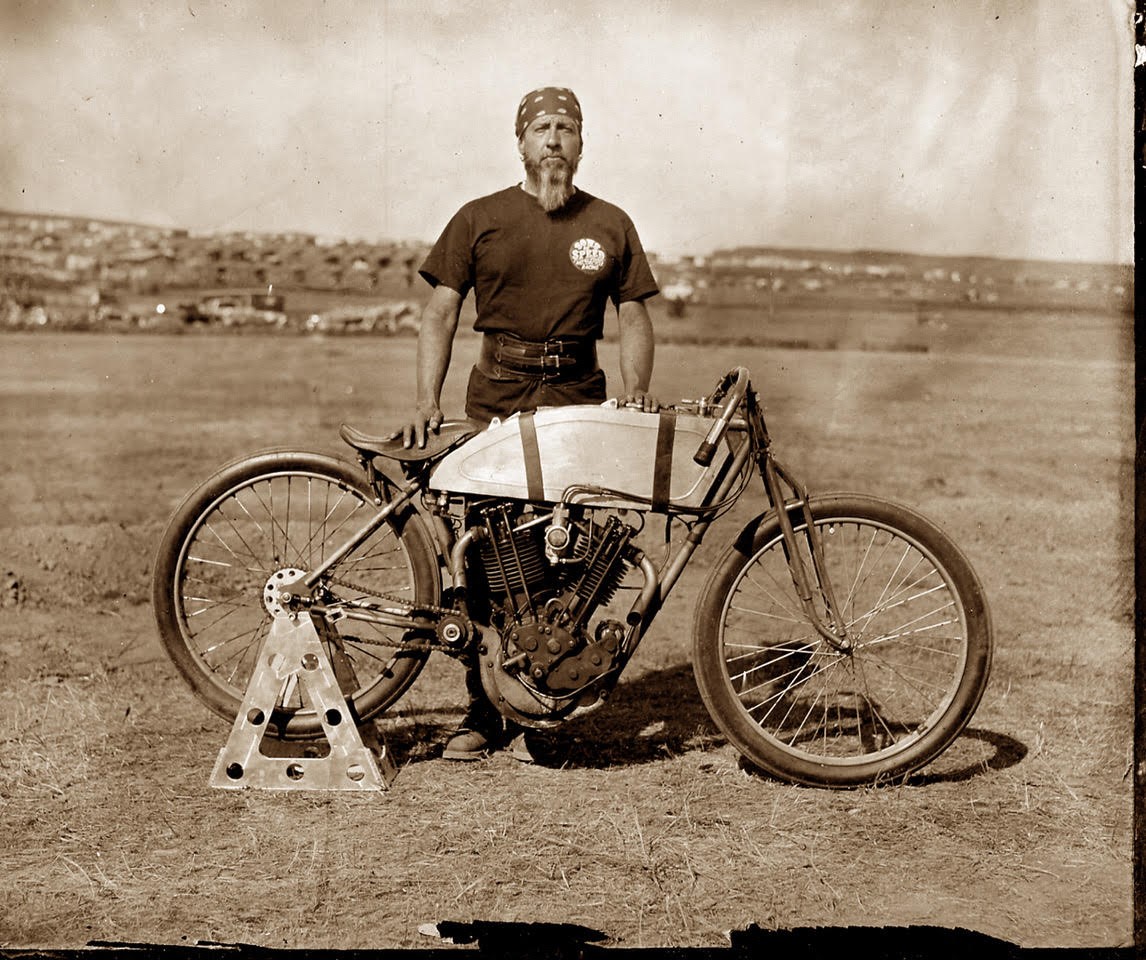 This means you have to bring your darkroom with you, and while Civil War photographers brought things out to the field in a horse-drawn cart, Rob allowed just a little bit of technology to help him out here, moving his art out of the studio and into the (early) twentieth century.
By mating a 1950 Harley-Davidson FL Panhead to a 1938 package truck (a commercial sidecar made by Harley), Rob was able to bring both his camera gear and darkroom straight to where the action is, combining “history, technology, and art in one crazy contraption,” as Rob says. The combination also makes the world’s greatest business card, just as package trucks were back in the day. Rob explains:
“I remember being at Sturgis doing pictures and hearing these guys behind me and, we don’t have to mention what motorcycle club it was but, they’re the biggest one in the world, and these guys are like ‘holy crap dude, that is awesome.’ You know, I’m teaching history to these guys. It’s great when you see stuff like that because, whether it’s old ladies, children, or guys like that, you know, it’s something everyone can appreciate. So it’s very fulfilling, to do something like that, that’s totally unique, and to do it in such a way where you’re very portable– because you need that darkroom with you— and it gets a lot of attention.” 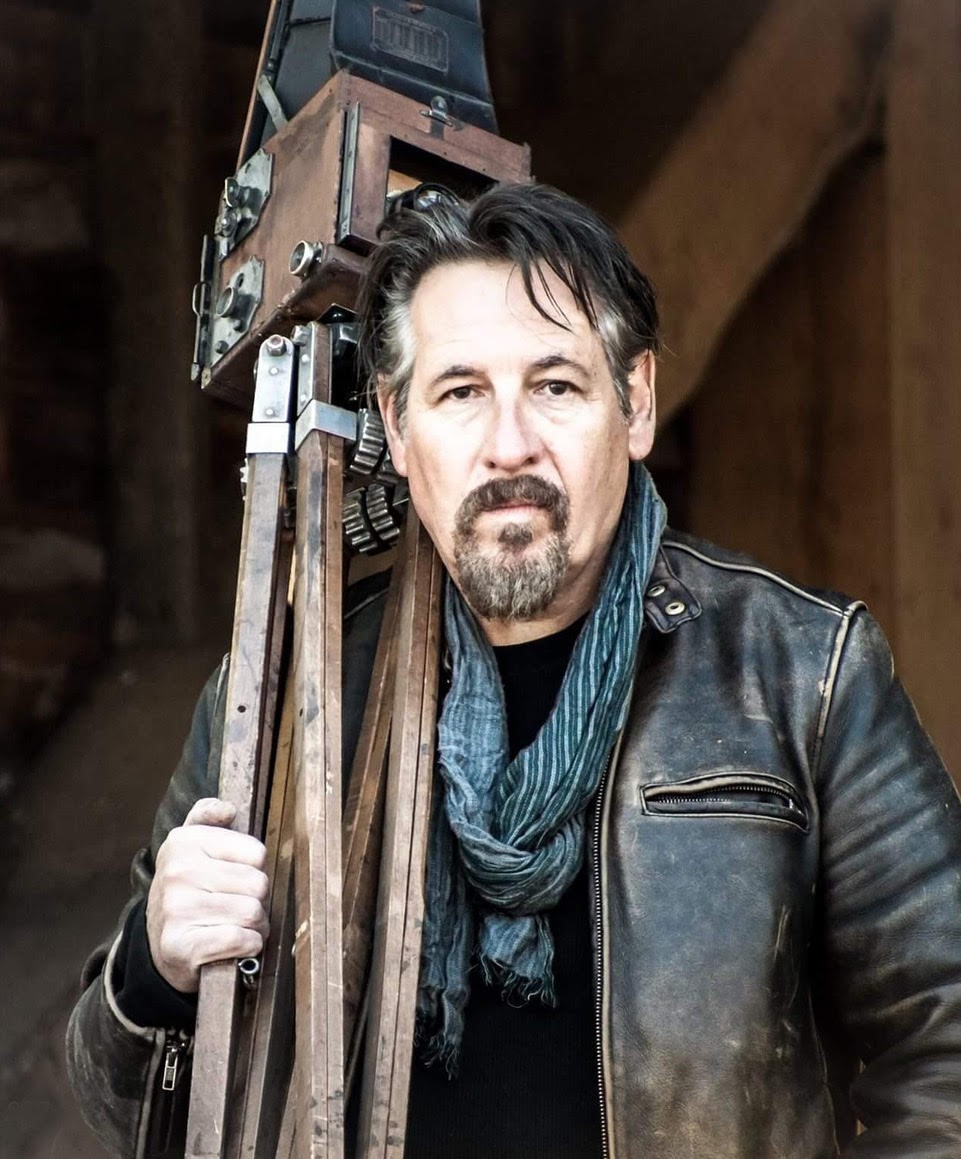 Everybody grasps the “wow” factor of sidecars, not just gearheads or motorcyclists. And the nearly lost art of wet plate photography is an easy sell once you start watching the process. Seeing an image come to life on a metal plate right before your eyes borders on sorcery. And in a way it is. Rob is only aware of five other people doing tintypes in North America.

With so few people doing this type of photography, others are very secretive about their techniques. It took a lot of trial-and-error and a fortunate find before Rob could take his work to the next level.
“I was in this rare bookstore in a little town called Albion, New York back in the 1980’s. I was always looking for old cameras, lenses, anything I could find. This is long before the days of eBay […] And so I ask, ‘do you happen to have any old books on Civil War photography?’ [..] He comes back with this small, beat up book, almost like a small bible, and it had all these brown stains in it. I realized those were silver nitrate stains […] that this was a formula book.”
But even with an original formula book Rob went through many tin plates as he learned which, unlike glass plates, cannot be scraped clean and reused if the image is no good. This is a far cry from today’s digital photography where you can fire off a dozen exposures, review them on an LCD screen, and delete the ones you don’t like. To get any image, even a bad one, takes a big dose of determination. 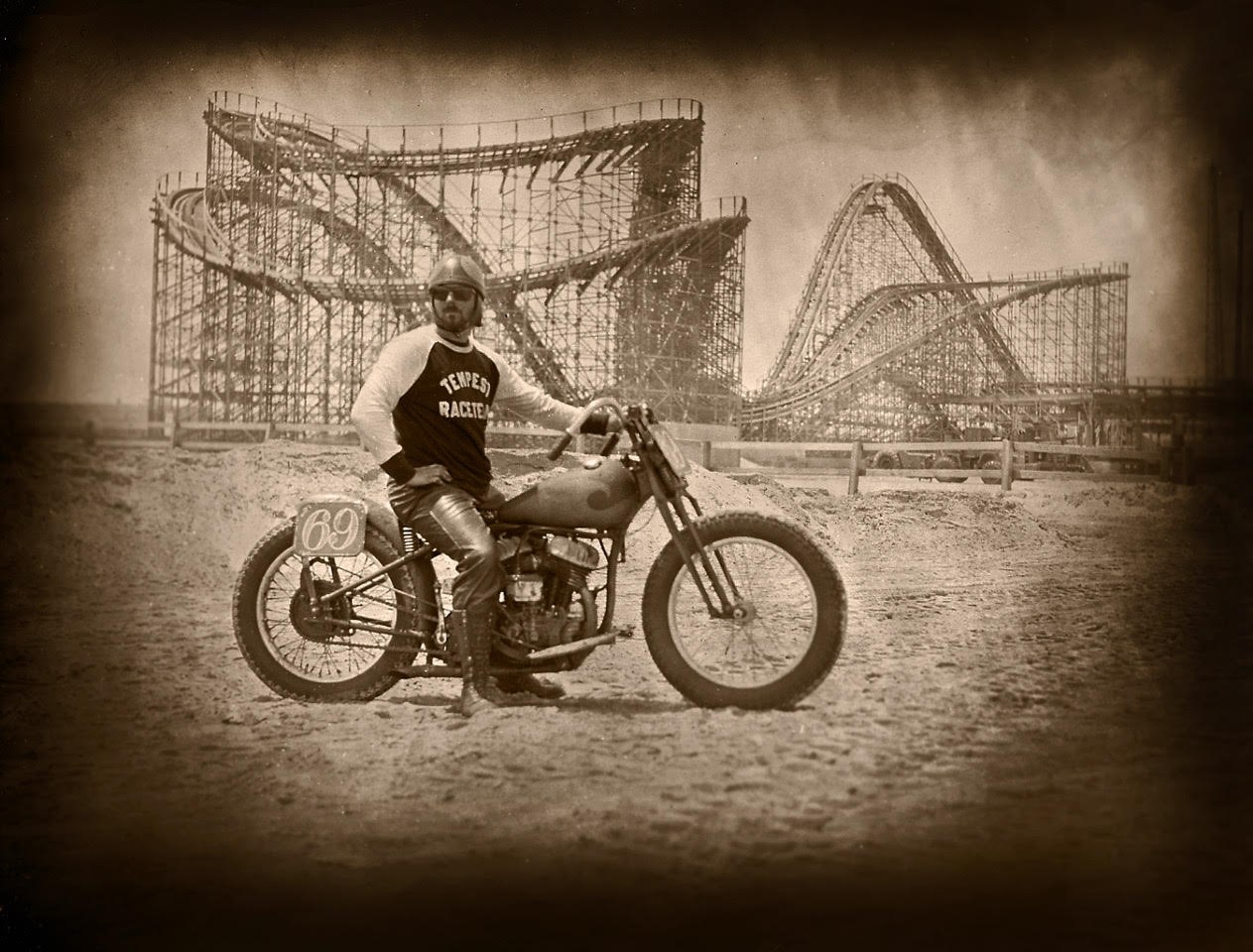 Many of Rob Gibson’s images are so well done it becomes difficult to tell what decade they were taken in. The vignetting around the border of the image is caused by the way light is blocked entering the lens or from certain lens filters. Once a byproduct of outdoor photography, it is now a popular way to draw attention to the subject, and many cellphone cameras let you digitally add the effect. Photo: Rob Gibson

But enough about photography for a moment, let’s take a look at the bike. Rob already had a background in building hot rods and vintage bikes, and it would have been totally feasible to build a darkroom in an old panel truck from the 1960’s and install a modern crate engine. But if you’re into tintype photography it’s assumed you favor authenticity over taking the easy route.
And the reason sidecars were popular in the early twentieth century is still true: they are more simple and less expensive than automobiles. That still doesn’t make it easy. A 1950 FL may be something you can find and ride, but you need one that does more than the occasional Sunday toddle down the backroads: it has to be a reliable workhorse. And despite the Package Truck being available from 1914 to 1957, there are few survivors and tend to be either museum quality (expensive) or “barn fresh” (haggard). 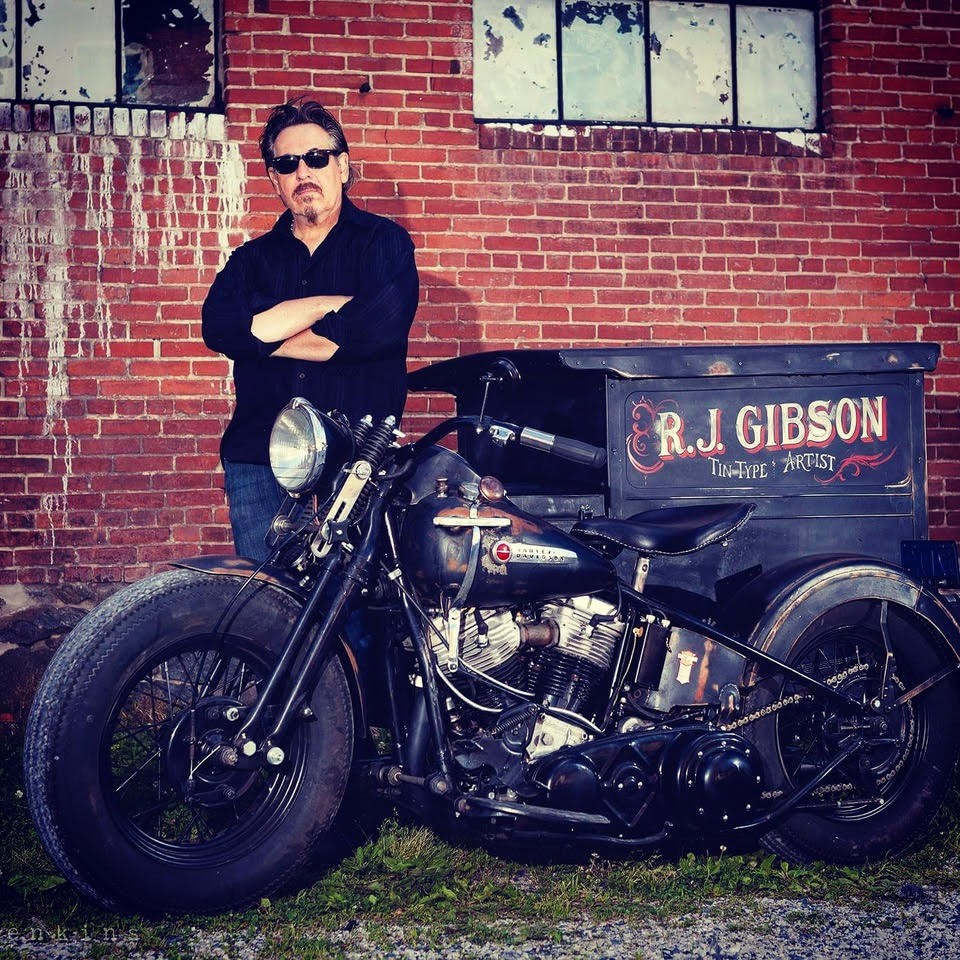 But Rob was lucky again:
“I had a good friend out here in Gettysburg [Pennsylvania] who is a collector, and he’s got about 75 bikes […] so I went over to his place, and he ended up having a frame to one, a 1938, and I end up trading him some Harley parts for it. He’s not the type to sell anything but he was willing to trade […] The box was trashed, so we did as much research as we could, found original specifications and plans.
It was basically a sales book that told exactly how to construct them. So I put a guy named Dustin Heisey on it, a good friend and great carpenter, and he did all the wood. We went over the plans and found it was a heavy, like three-quarter-inch plywood, and then skinned with 22-gauge sheet steel. So another friend of mine that was a fabricator named Mark Main did the sheet metal work on the outside. Then I proceeded to turn the inside of it into an area that could be used as a darkroom.”
The first real test came at TROG, The Race of Gentleman. The event is now quite famous, featuring beach races using pre-war (as well as post-war) cars and motorcycles, with the whole thing having an all-American vibe from a 1950’s teen-scare movie. 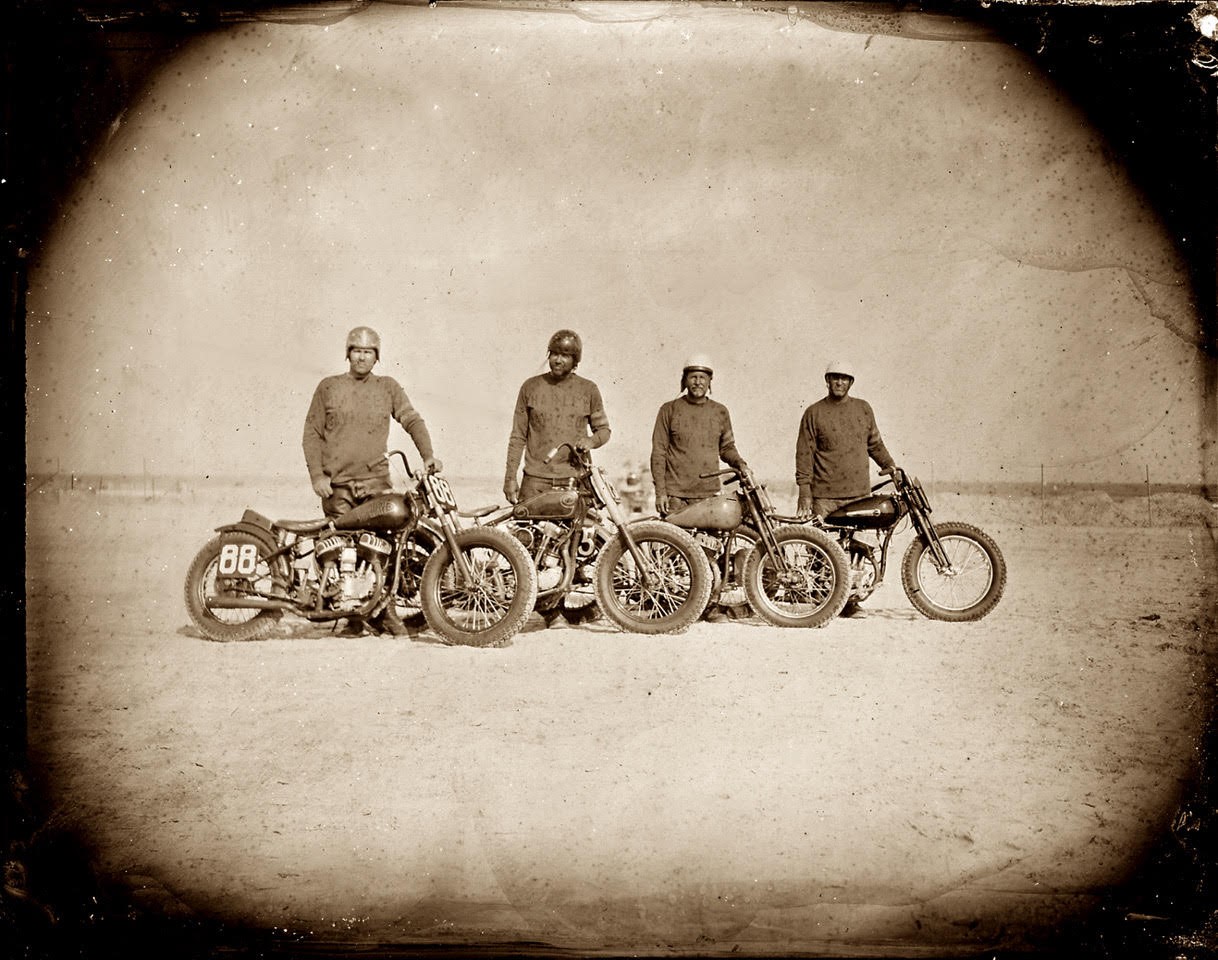 T.R.O.G. racers pose with their machines. Hard to believe this is a recent photo, but it was captured in 2017 on the beaches of New Jersey. Photo: Rob Gibson.

Of course Rob was an instant hit. Anyone going to see flathead Harley’s squirm in the sand for traction is going to be spellbound by the effort it takes to sensitize a metal plate and capture an image on it. And Rob’s rig and process fit the vibe of the event, where race machines are required to keep the aesthetic of 1940’s-era racers, devoid of zip-ties or plastic number plates.

And that draw will hopefully find an even larger audience in the future. Rob has done tintype photos for a number of major motion pictures: Gods and Generals, Into the West, The Assassination of Jesse James, National Treasure, Book of Secrets, and many pieces for Discovery Channel, History Channel, PBS, and so on. This time working on both sides of the camera has allowed Rob to develop a concept for a TV series, based on his Forgotten America Project.
Rob seeks out the crumbling buildings, railyards, and roadways that point back to America’s powerful industrial past. Riding his outfit along the backroads, he has been documenting these places and their stories before they disappear forever. 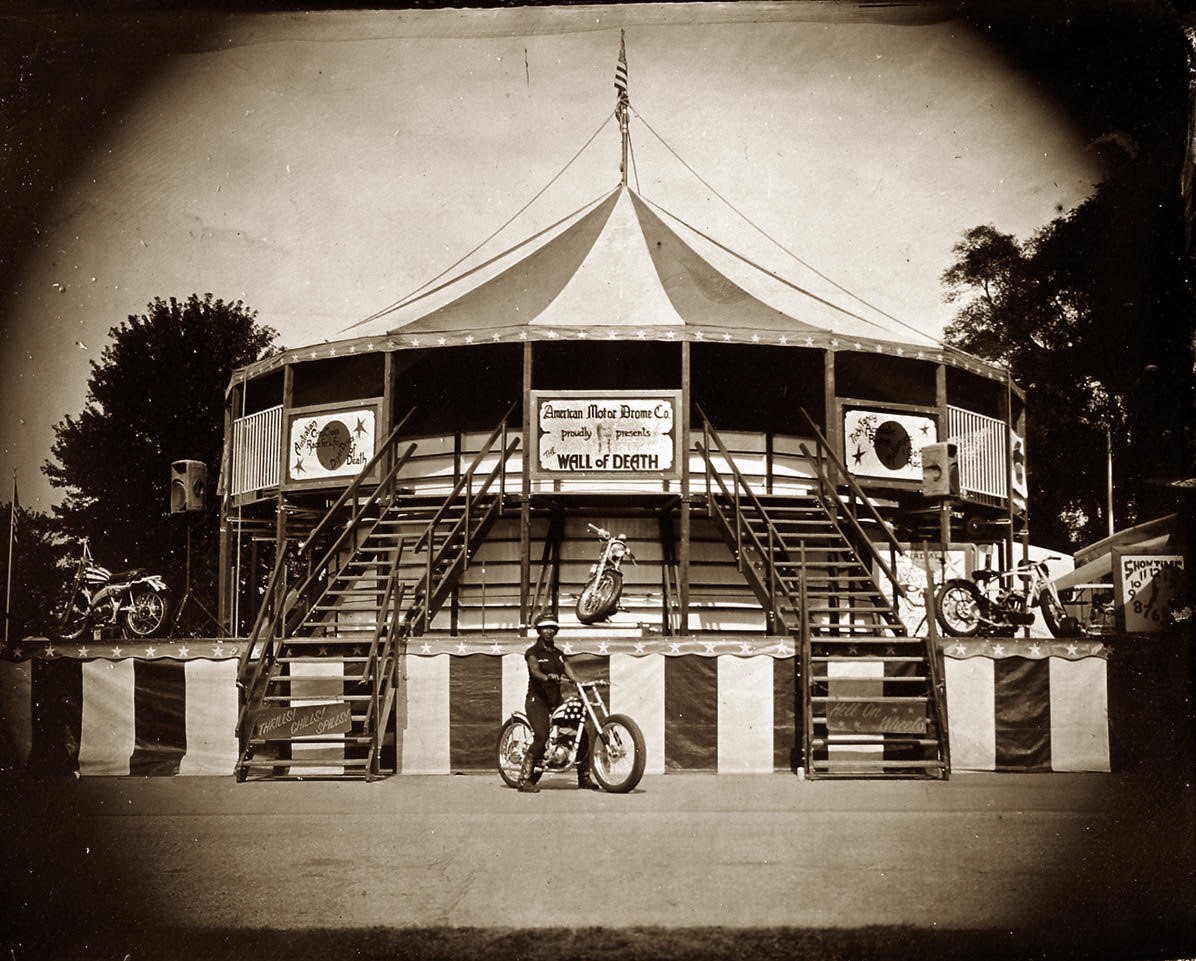 In Rob’s own words, “We’re in talks with a number of production companies and a couple of various networks about doing a show based around myself and my buddy [and assistant] Bobby Deihl, travelling around the country not only doing the photography, but also highlighting the forgotten roads of America […] Old abandoned industrial sites, the old homesteads that have been forgotten, or ghost towns […] Give me an old creepy building and I’m there. I just love rummaging through that stuff.”

“If I can convince people through my artwork the value of this stuff then I’ve certainly done my job.” 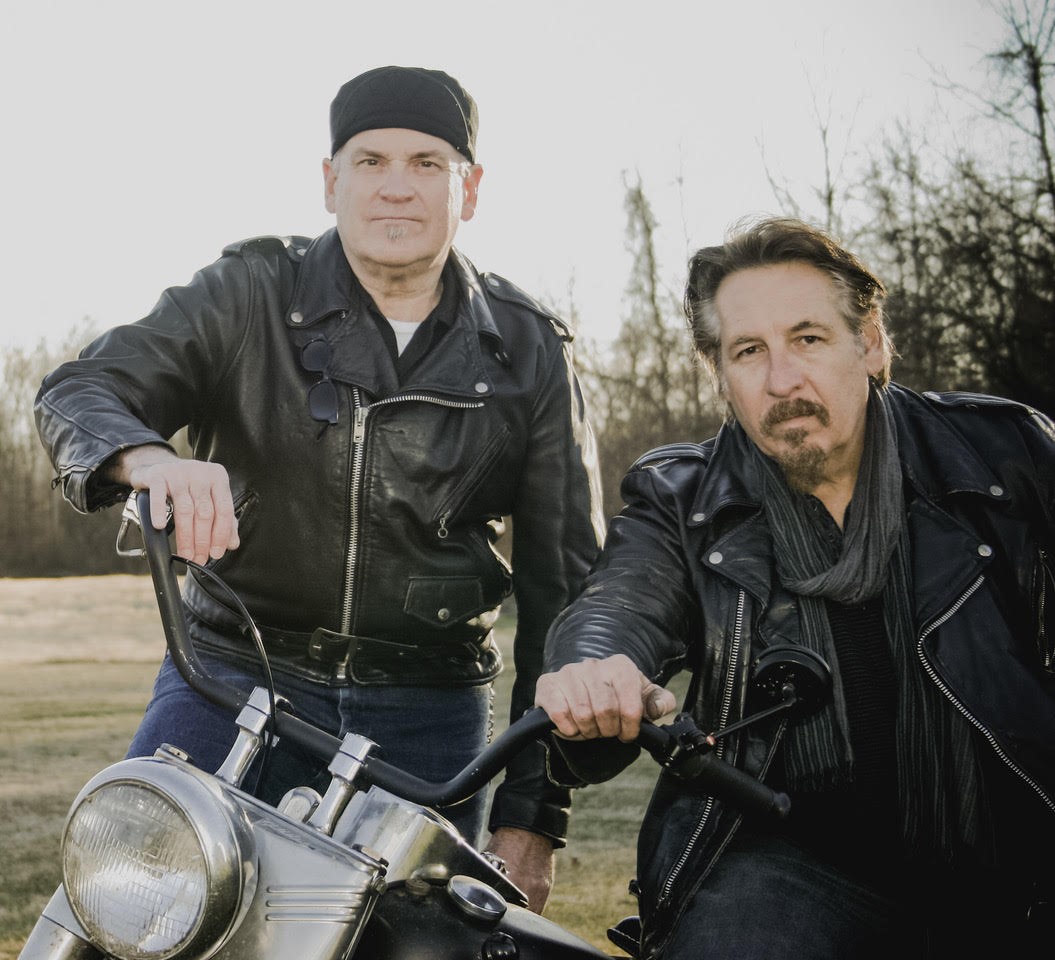 That sounds like TV worth watching… far from the made-up drama of so-called reality TV. Hopefully a deal is struck so Rob can take his considerable talents for photography, history, and story-telling to the masses. Rob explains, “I call them blue collar adventures, where you just get on the bike with your buddies and off you go and, rather than just hitting bar after bar, you’re hitting all these funky old abandoned places, industrial sites, you know… roadside America […] especially when you’re doing it on a vintage bike. When you’re out there on an old Panhead or Knucklehead, and dressing the part, you’re seeing America like they did back in 1930 and 1940.” 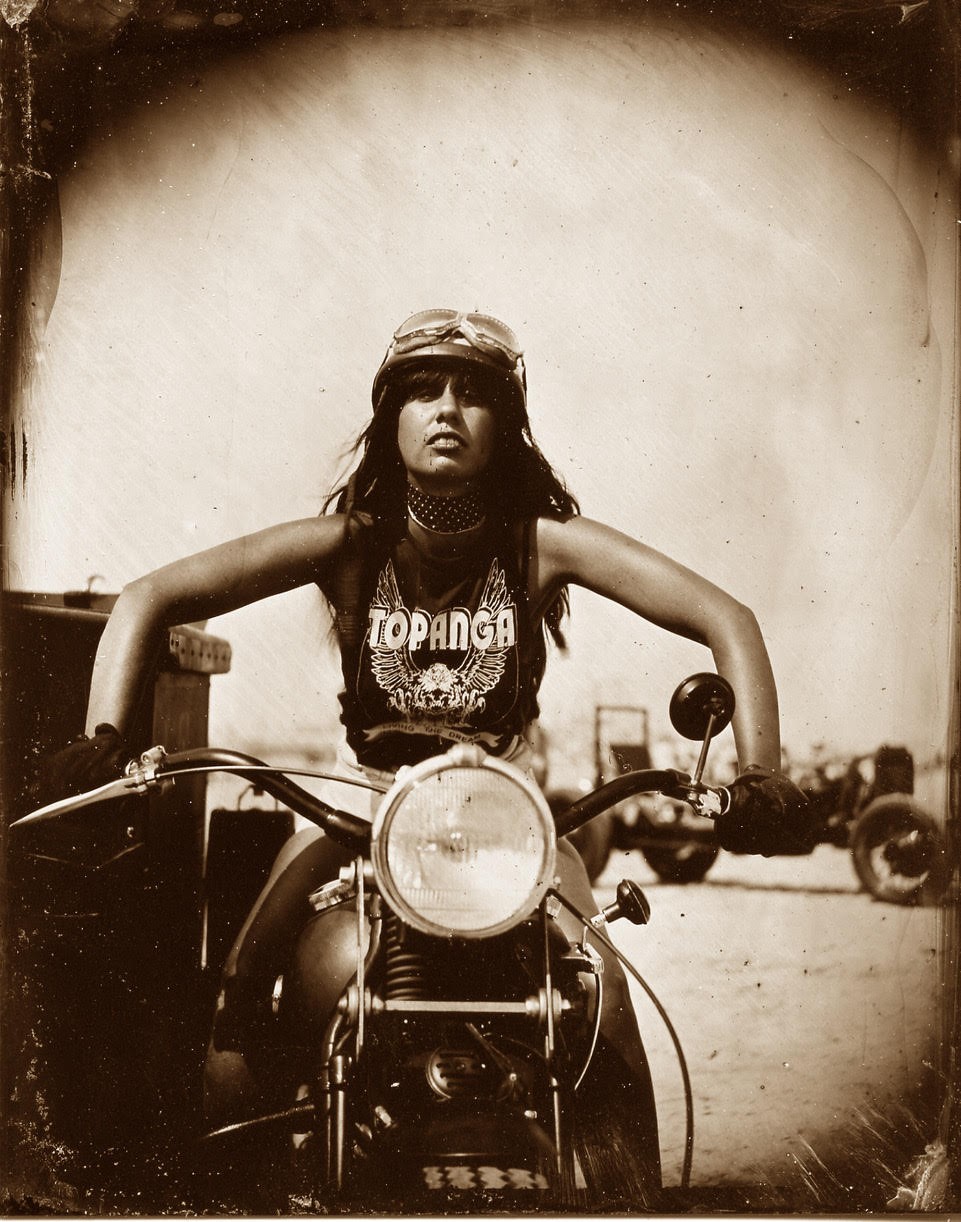 And there you have it. My 45-minute interview went on for over an hour. I couldn’t help but be drawn in by his passion and depth of knowledge. Rob still maintains his studio in Gettysburg, PA, where he does period photos. He also spends a lot of time on the road, having been to Daytona Bike Week and more recently to this year’s T.R.O.G. event. He also plans to be at Sturgis again this year. For more information, videos, images, and booking information, visit Rob’s website at www.americantintype.com. From there you can also find links to his Facebook and Instagram profiles. 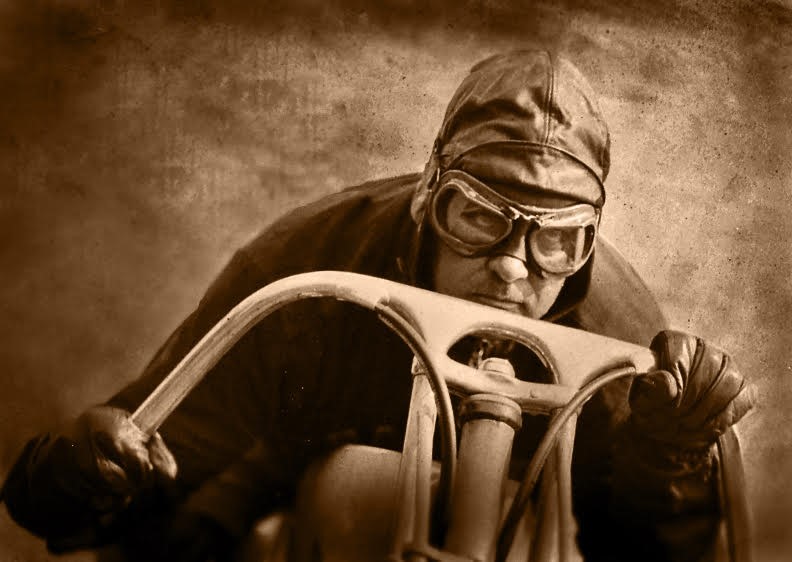