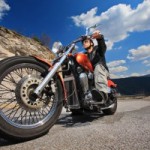 Protect your rights with a motorcycle accident injury attorney.

In a recent bit of back-to-back bad news in Santa Barbara during the Fourth of July holiday weekend, at least two serious motorcycle accidents happened on the same day within minutes of each other, according to a report in the Santa Maria Times. The multiple motorcycle crashes on July 1st, 2011 left at least two riders with serious injuries.
According to authorities, the first Santa Barbara motorcycle wreck occurred at about 10:15 in the morning on Highway 101 near Clark Avenue when a 62-year-old man crashed his motorcycle into a sign pole. The seriously-injured biker was transported to a local California hospital with multiple broken bones and head trauma; no other vehicles were thought to be involved.
California Highway Patrol (CHP) dispatchers then received word of a second Santa Barbara motorcycle accident spotted at about 10:30 a.m. on Highway 166 South near Tepusquet Road. Oncoming motorists found an unidentified, badly-injured motorcyclist lying in the road bleeding and unconscious. He was rushed to Marian Medical Center with serious injuries.
Coincidence or Risky Road?