The Early Days Of Motorcycle Culture Today motorcycles are all around us; on the highways going and come from everywhere, at the local waterhole, that cool burger stand on Friday night, ok you get the picture, motorcycles are everywhere being rode by mainstream folks and those hardcore biker types who actually made the name “Harley Chopper” what is stands for today. As early as 10 or 15 years ago that wasn’t the case, and motorcyclists were largely considered less than acceptable by the American populous, mostly in part to the “outlaw” stigma cast on bikers depicted in those low budget Hollywood movies from the 60’s and 70’s.
It isn’t a coincidence either, that as the cowboy era faded away, the mystique of motorcycles and the longing to ride the open road helped coin the name “Iron Horse” while quickly taking over the dreams of men who saved every penny they could in hopes of one day getting in the wind, and the whimsy of boys who rode their bicycles pretending they were their motion picture hero’s.
As early as the 1920’s there were daring men and women who made their living riding motorcycles on the infamous wall of death in Coney Island, New York simultaneously racing and crisscrossing in a raucous blur of fumes, and fury inside the equivalent of an oversized wooden barrel. The sport had a strong run from the 1930s- 1960s (with Indian Scouts being the motorcycle of choice), but there are still hardcore enthusiasts to be found all over keeping it alive today that can be seen at motorcycle rallies like Sturgis and others.
What gave life to the motorcycle lifestyle in the early years was the infinite freedom and passion exuded by these daredevils and motion picture rebels that excited men, women, and children who identified with these new social icons and wanted to be a part of it any way they could.
With the United States entering WWI and WWII, the motorcycle and the men who rode them in the armed forces were bestowed with a patriotic honor and reverence that depicted values of honesty, integrity and hard work that was held in high regard by the working class men who proudly rode their civilian Knucklehead Harley’s. 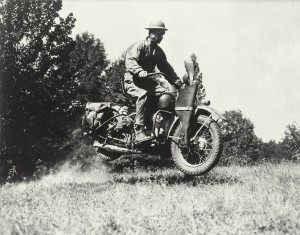 As time marches on, the negative social thoughts of the motorcycle and those who live the biker lifestyle has almost been completely reversed, it is commonplace to see people from all walks of life, and social standing riding a custom Harley, or sportbike as their primary means of transportation, and not so much as the reply to the sky rocking price of gasoline, but more of a statement that says there is truly something unique and enticing about the rumble and roar of American pig iron between your legs and the feeling of freedom that comes from being in the wind!