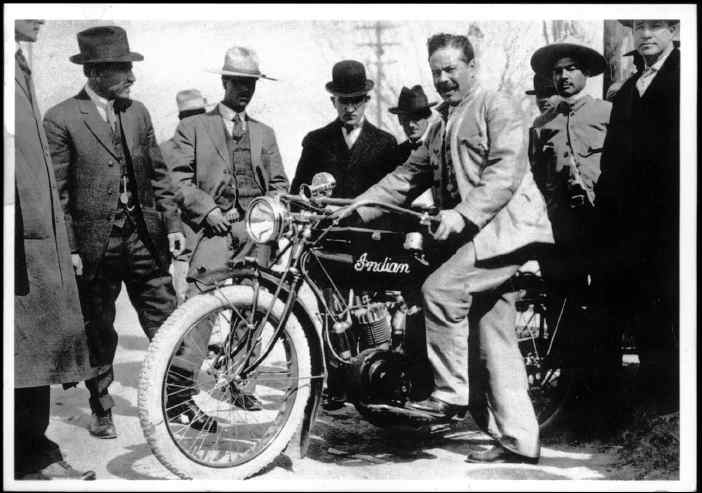 War II and civilian production followed with Harley producing a range of large V-twin motorcycles that were successful on racetracks and for private buyers.
By the beginning of WWII, Harley Davidson was already supplying the Army with a military-specific version of its 45 cubic inches (740 cc) WL line, called the WLA.When the war broke out, Harley Davidson shifted its production to war vehicles. 90,000 + military motorcycles, were produced and supplied America’s’ allies. For this service, Harley Davidson received two Army-Navy ‘E’ Awards, one in 1943 and the other in 1945, which were awarded for Excellence in Production.
Hollywood played a big part in both building the reputation of Harley Davidson and tearing it down; With the war effort in full swing newsreels and movies could be seen with American military men serving their county atop various models of Harley Davidson motorcycles, but with the many outlaw biker gang films produced from the 1950’s through the 1970’s, following the Hollister riot on July 4, 1947. “Harley Davidson” for the long time was synonymous with the Hells Angels and other outlaw motorcyclists.
Throughout all of the ups and downs, two things remained; the first was that Harley Davidson still held its prestigious crown as king of motorcycle design, and that so called tarnished reputation cast by a biased general public only made the allure of owning and riding a Harley Davidson motorcycle more attractive to those who never considered themselves part of the general public anyway!
The world could say what it wanted about the Harley motorcycle, but the men who made them an integral part of their lifestyle and culture could care less. It seems that long before the invention of the motorcycle there was a type of man that was uniquely different from other men, and this can be seen in the wild west days with the wandering cowboy, and of course the “outlaw”, who’s history was somehow translated into modern time by coining the word “Ironhorse”.
No matter what those “other” people think about us, our lifestyle, or our motorcycle, one thing is certain…the Harley Davidson is here to stay and so are the men who love them, and all you have to do is walk outside on a sunny day and anywhere people are having fun you are sure to hear  that distinctively sexy rumble and roar of some biker cruising through town!
If you have or a loved one has been injured in a motorcycle accident, you need a tough and aggressive motorcycle accident lawyer who will bring the law to your side to get your bike repaired, money for your medical bills and compensation for your pain and suffering. Call 1-800-4-BIKERS to speak with a lawyer who rides a motorcycle and knows the law!