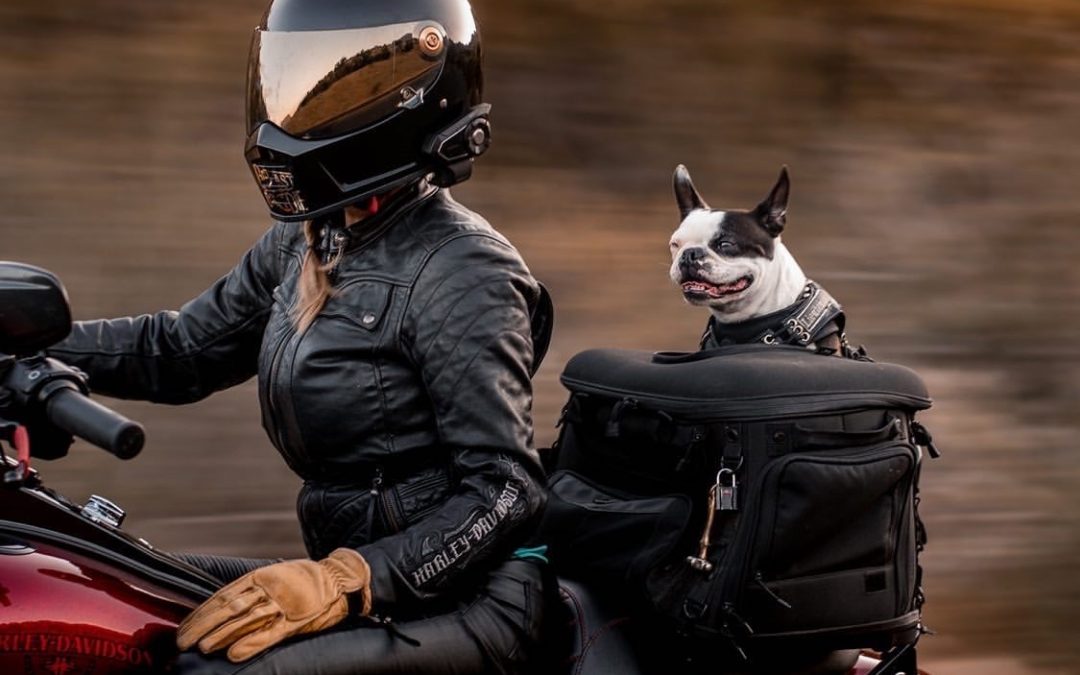 Think you’re a motorcycle enthusiast? Cricket the Boston Terrier has over 400,000 miles of riding on a motorcycle including 48 states and 3 countries…WOW, more than most riders! And she will likely hit 500,000 miles in 2020.

Campouts and overnights? She loves em. 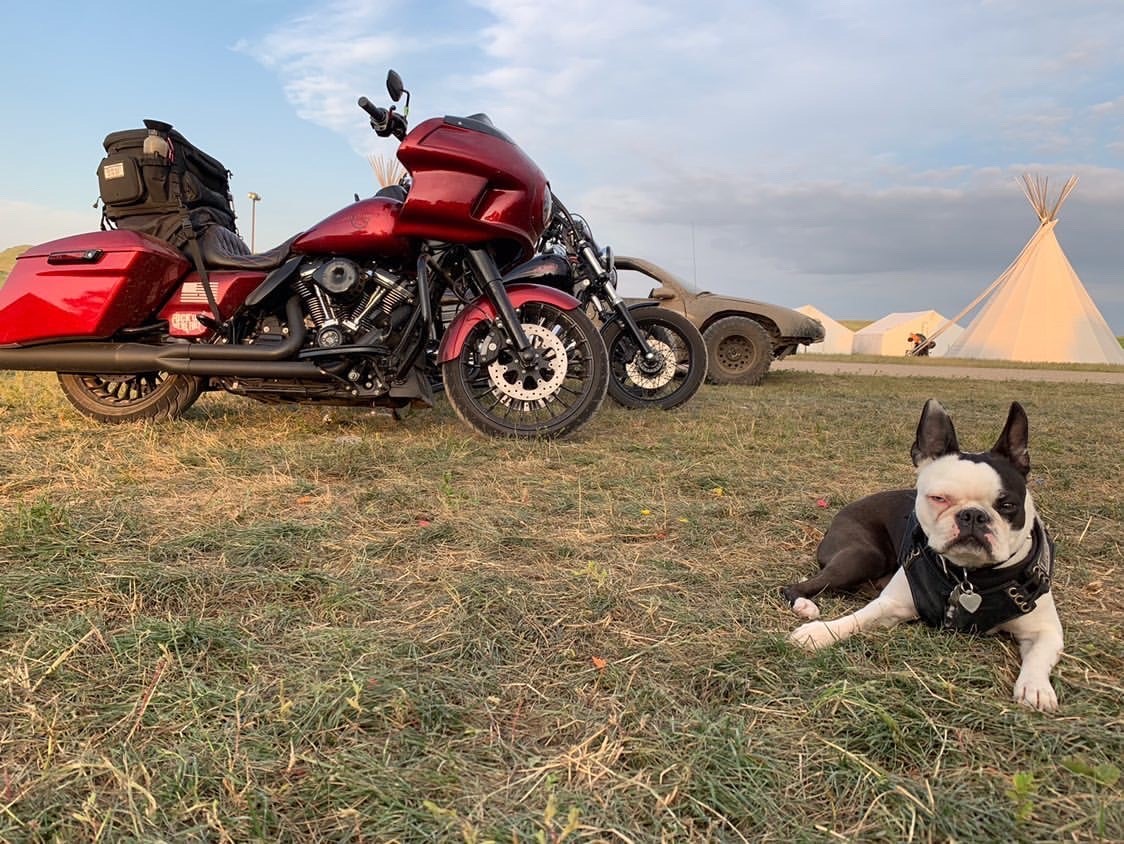 Cricket the Boston Terrier- Photo by Jean B.

Cricket the Boston Terrier has been riding on the back of the motorcycle for over 5 years, traveling all over the country. It is not everyday you see a pooch on a motorcycle, but it is more widely accepted ever since the late 1990’s. That’s when lawyer Russ Brown, founder of Russ Brown Motorcycle Attorneys, took the original test case to court and helped make the practice legal.

Back in 1995, Russ Brown helped pave the way for riders to have dogs as passengers on motorcycles. A SoCal rider named Gerbracht was ticketed for allowing his Husky, Harley, to ride on the tank of his motorcycle. The ticket code violation stated, “No person . . . shall knowingly permit any person to ride on part of a vehicle not intended for the use of passengers. “ 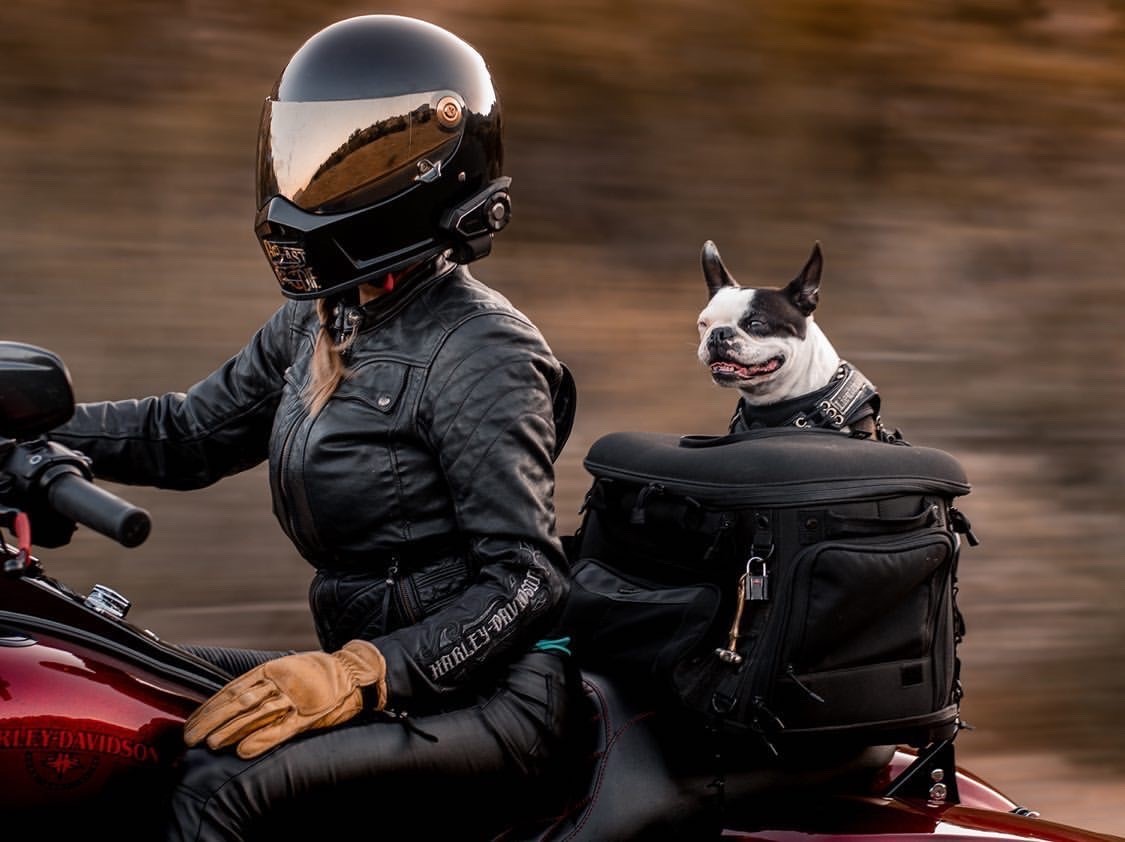 Photo by Christopher Matlock with permission, reprints or reuse only with explicit written permission.

“It appeared to me to be an unsafe riding situation,” said Officer Webb, the policeman who ticketed Gerbracht. He relied on his vehicle code manual which stated that “no passenger or ‘load’ could be carried on a part of a motor vehicle not intended for use of a passenger.”

According to the LA Times, before Gerbracht arrived at court, “Russ Brown said, ‘Look,’ pointing to a copy of the vehicle code, ‘nowhere does this say anything about dogs, or about ‘loads.’ It says: ‘No person . . . shall knowingly permit any person to ride’ on part of a vehicle not intended for the use of passengers’.”

Ultimately, Russ’ arguments won the case. A dog is not in fact a person, and he effectively illustrated to the court how Gerbracht had gone above and beyond to make changes to his bike so it was safe and enjoyable for Harley to ride.

Have you ever considered bringing your pooch on a motorcycle adventure? Cricket’s owner, Jean, shares some insight into her training and experiences.

1. As much fun as it sounds, you cannot just strap a dog to the back and take off! Jean has trained 20 or so dogs to ride on motorcycles, from Chihuahuas to Labs. She says it is imperative to take the time necessary to properly and safely get them on a bike.

2. Boston Terriers are very smart and easy to train, a great fit for the seat of a motorcycle, and resilient for their size. Jean has successfully trained two Boston Terriers to love motorcycle riding. But don’t worry, she says any breed of dog with the right temperament & correct training can learn.

3. Jean starts them out by desensitizing them to the sounds of the engine and motorcycle pipes. Cricket only has 20% hearing in one ear–the side with the blue eye–which is pretty common in these breeds. You may think she’s ignoring you, but she’s just not listening! Just because Cricket hears a mumbled rumble doesn’t mean you cannot desensitize your non-hearing-impaired pooch–it just takes time and patience.

4. Jean recommends you do not actually start a dog riding on a motorcycle until the canine is fully developed, at about 18 months, as strong joints and bones are a must! 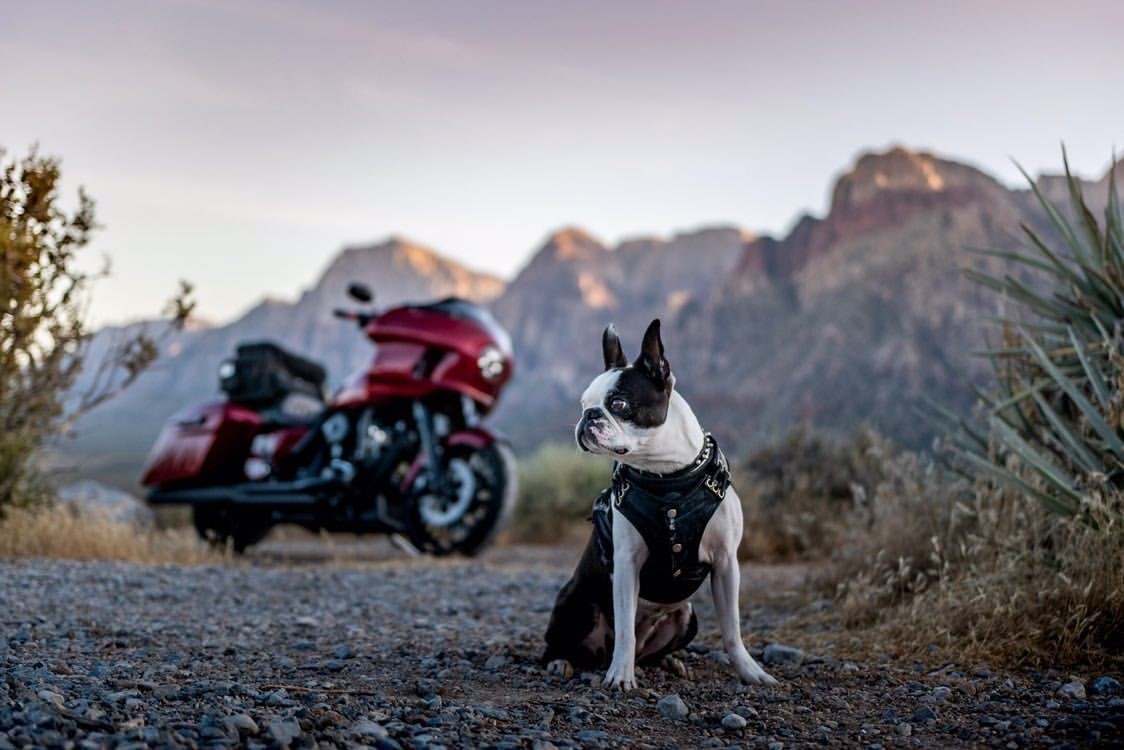 Photo by Christopher Matlock with permission, reprints or reuse only with explicit written permission.

5. Cricket spends her time on the motorcycle in a motorcycle crate–the ‘Grand Palace’ by Kuryakyn is her go-to. Motorcycle crates for pooches include a harness to strap them in with a quick detach for easy removal, and double as a crate for those campouts and overnights Cricket enjoys so much. Ideally, a crate purchase is made well ahead of time and your dog gradually acclimated to spending time in the crate. Once they are comfortable, you can transfer the same crate to the motorcycle, and gradually introduce them to the sounds and feel of the bike running. For a successful transition to riding, pay close attention to your four-legged friend. Do not push if they are not feeling safe and comfortable.

6. Motorcycle Helmets are available for your four-legged friend but Cricket refrains due to her short nose as the helmet strap can cause difficulty breathing. She has a few custom ones she wears for photos.

Jean dotes on Cricket. Her Grand Pet Palace by Kuryakyn comes with internal harness system, ventilation options, zippered full protection from weather, and real sheepskin with memory foam for Cricket’s comfort. She’s not spoiled at all! 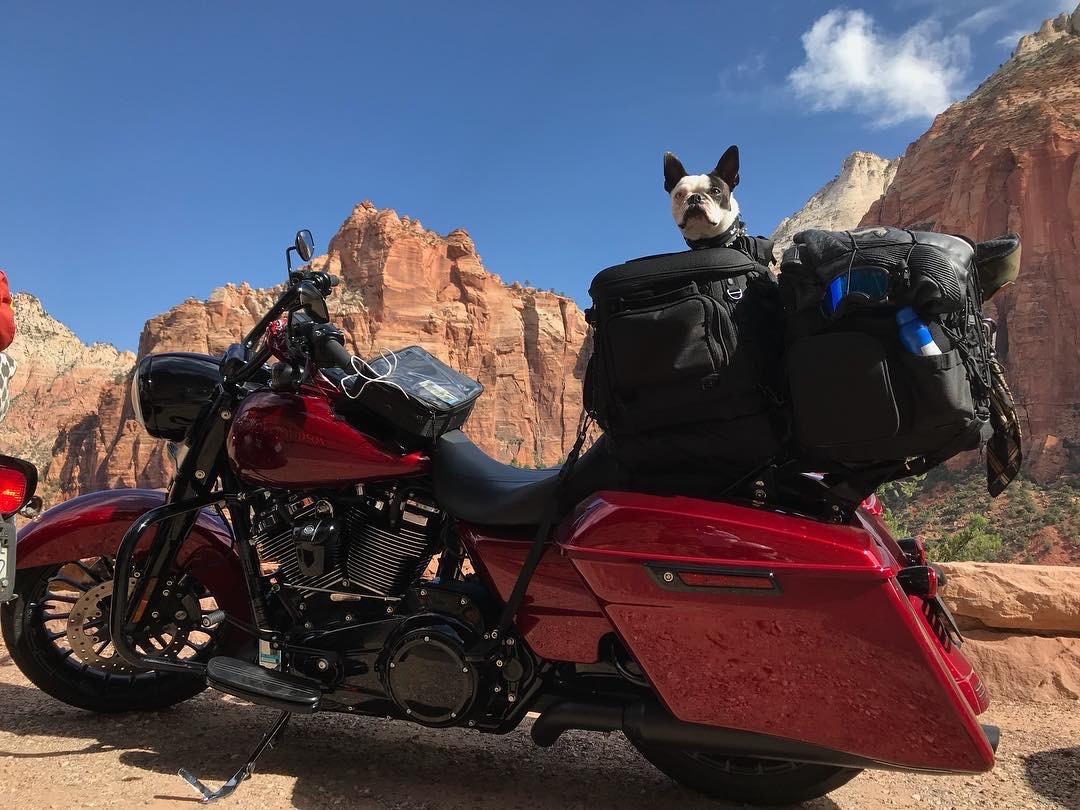 Cricket posing in her Grand Palace Photo by Jean B.

When asked if Cricket makes riding more complicated for Jean, she responded, “It actually makes me a better rider.” Why? Well Jean rides about 10,000 miles a month, often tank to tank without stopping, Cricket helps to slow her down so she finds herself enjoying the scenery of the ride and being more aware of speed and comfort. For Cricket, water and potty breaks are important; she is on a strict diet on the road and doesn’t take candy from strangers. Jean keeps track of a loose schedule and knows when it’s time to take a break.

Cricket brings a TON of attention to Jean and magnifies her adventures. She occasionally gets stopped by law enforcement–fortunately it’s because they are interested in seeing her adorable Harley canine. These two know they are a rare duo and are more than happy to say hi and answer a couple questions as long as time & safety permit. Just please don’t wave them down while on the road! 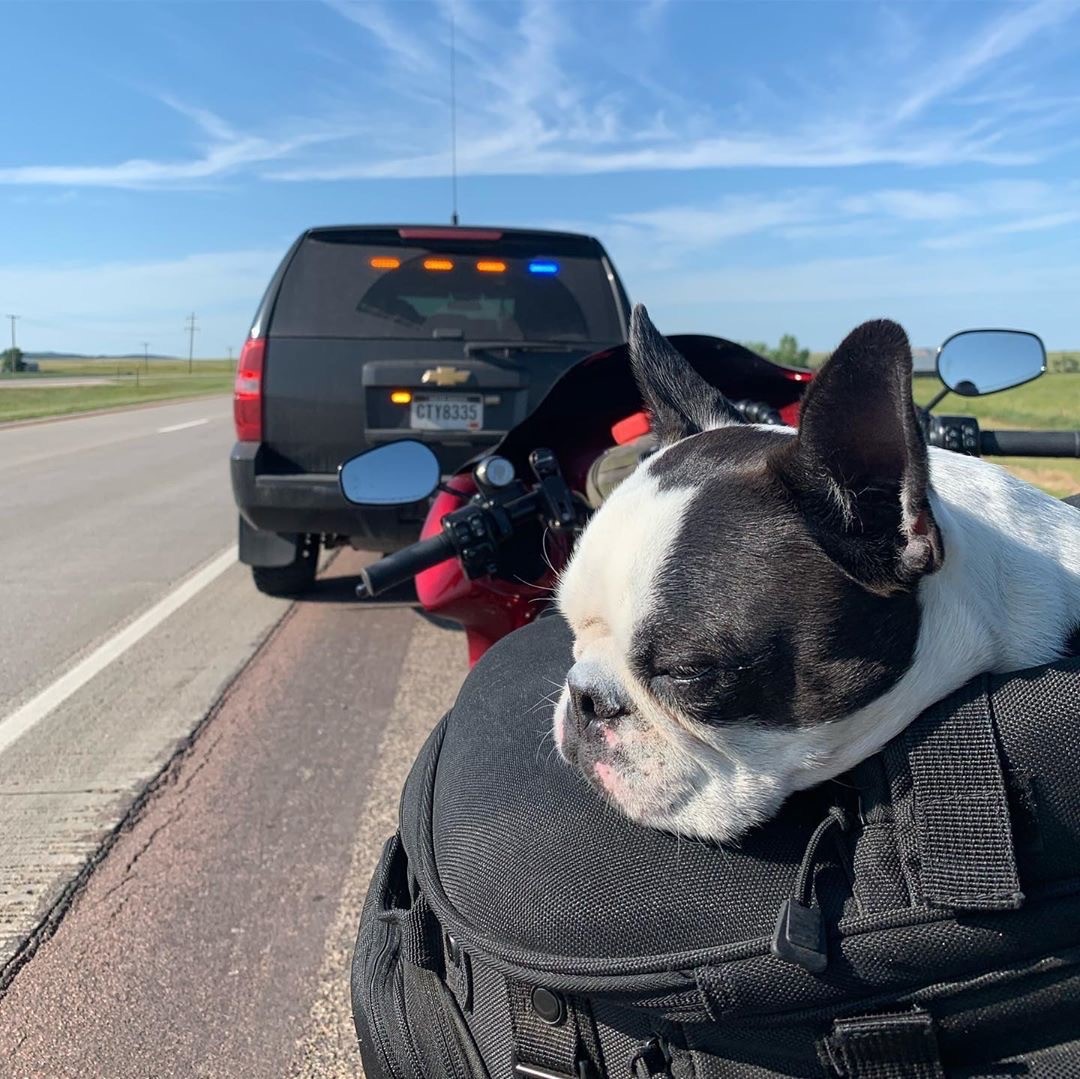 Pulled over in Sturgis, SD…zzzzzz- Photo by Jean B

While on the road Cricket DOUBLES her food intake to help with all the extra calories she’s burning while leaning in to the curves. Yeah you heard me, this little lady doesn’t just sit on the back and chill, she enjoys RIDING and will lean in to the curves for up to 16 hours before she gets tired and decides to take a rest. Some of her favorite rides include anywhere with mountains, she loves the cooler setting and even begins tapping her feet in excitement when she sees those twisties coming! This pooch enjoys the ride and is all about staying up and watching the action. Cricket is happiest going 60+ miles per hour and meeting up with her friends all around the nation. (Wo)man’s best friend is the best passenger—she never complains about how many miles, destination, or sleeping arrangements—she’s just down to go on the adventure!

Crickets extensive training includes a ton of socialization, she LOVES attending events and has even become somewhat of a celebrity in the motorcycle world! Called over to take photos like this.. 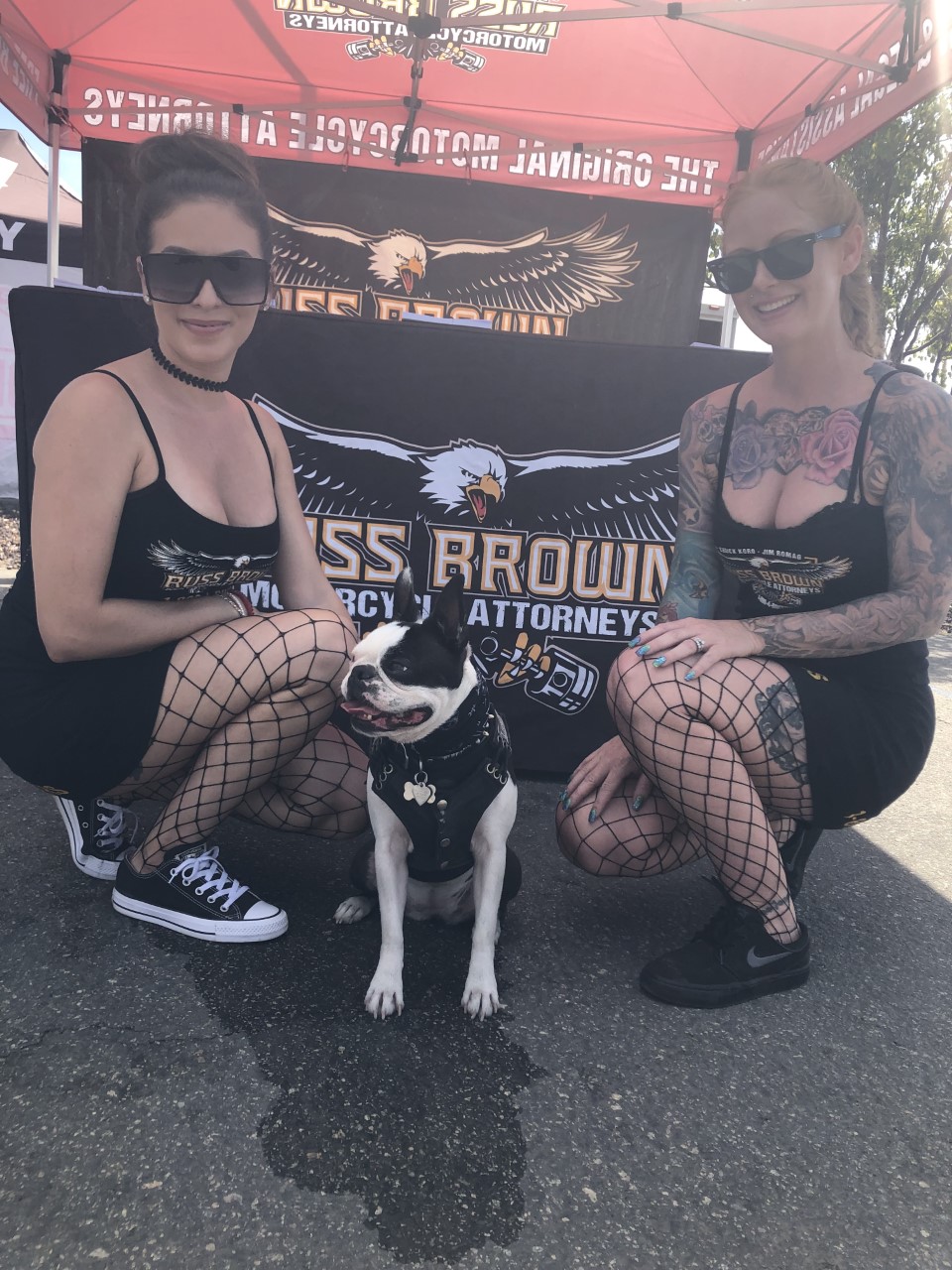 As BAM members, Cricket and Jean have never themselves had to call for roadside assistance—but they have had the opportunity to help another fellow BAM member. A Canadian was visiting USA when he broke down near Las Vegas. Russ Brown’s free BAM program matched him with Jean who was able to help him safely get his motorcycle to her home where the lucky gent ended up staying for 10 days! Cricket & Jean shared their space and contacts and helped him get the parts he needed….While his bike repairs were underway, they showed him Nevada, letting him use an extra bike and joining with their friends for some two-wheel adventures. Vegas may be famous for the Strip but these two ladies know great local roads to ride. They shared some incredible Nevada National Parks, mountains, fishing lakes, and ski resorts, all a short ride from the Strip. Not only did they help a fellow BAM rider out, big-time, they made a new riding buddy! “Fan photo” of Cricket in her vest and BAMdanna- Photo by Jammie S.

Cricket is patiently waiting for quarantine to end so she can resume her favorite activities, like campouts with her friends. Jean and Cricket are still adventuring, but with many of the normal biker hangouts closed and some people staying home, they are missing their road friends! Cricket enjoys being one of the only dogs on the road getting spoiled in the meantime. This female riding duo is looking forward to more adventures and cannot wait to have a nice cold beer by the campfire with some awesome friends.