Who Is Brenda Fox? 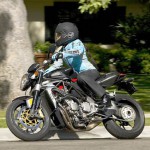 I met Brenda Fox a few years ago at the Rock Store, a famous haunt for motorcyclists, in the Los Angeles area. I was there with Motorcycle Lawyer Russ Brown, who has known Brenda for many years and had always talked highly about her. What immediately impressed me about Brenda right away was her unending smile and positive energy. Brenda is now fighting Breast Cancer and, if that isn’t enough of a challenge, she is fighting it while having no medical insurance whatsoever. Brenda Fox is in the fight for her life yet here she is still smiling and boiling over with incredible energy.
Brenda grew up surrounded by motorcycles so it was only natural that she would be drawn to the world of bikes too. This love of motorcycles bloomed into an amazing career that has covered all aspects of the motorcycle industry including becoming a professional motorcycle test rider, journalist and consultant.
Brenda has successfully submersed herself into a predominantly male field and has worked in television, film, has done stunt work and has been featured in leading motorcycle publications, billboard advertisements, books and television programs. Brenda also had the honor of performing as the Custom Motorcycle Consultant for Robb Report Motorcycle Magazine and CurtCo Media, the leaders in luxury media whose publications include the Robb Report family of magazines, as well as Worth and Art & Antiques. Brenda is also one of the few motorcyclist test riders and journalist reviewing luxury machines (above the $85,000 price point) and the only female judge at the AMD World Championship of Custom Bike Building, Paris, France.
Brenda has used her public presence to promote other charities that are dear to her including being the Spokesperson for International Women Breast Cancer Riders, Livestrong Day, Get a Vision Cancer Support Charities along with animal health products. She consistently serves as the Grand Marshal for charity events in and fundraisers for Autism, Breast Cancer, and Cancer & Animal Rescue organizations.
Brenda Fox, a woman who has helped so many and has stayed positive and optimistic in spite of the health crisis she currently faces, an extraordinary woman and incredible human being.
We are helping Brenda and her fight by raising money to help with her medical care. If you wish to donate please click here. You can also check out her fan page on Facebook – Womenmotorcyclists
If 1000 people donate 25 bucks we can reach our goal!!!