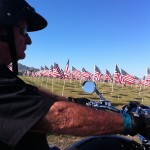 Los Angeles, California: With so many now living a motorcycle lifestyle, from that lifestyle grew many new businesses such as parts and accessories manufacturers, custom motorcycle builders, painters, and many other service companies. As a young man Motorcycle Attorney Russ Brown was drawn to motorcycle’s; he just loved them. While majoring in marketing at UCLA Russ bought his first motorcycle a Royal Enfield 150 cc.
Now working for corporate America Russ just wasn’t happy, he wanted to do something meaningful with his life so he went back to college and earned a degree in law. During this time he discovered that injured motorcyclists were being taken advantage of by insurance claims adjusters. He found that many times underhanded tactics were used to settle injury claims to keep the cases out of court and this infuriated him, so Russ changed his law practice and focused on helping protect the rights of motorcyclists who became victims of motorcycle accidents.
Within the motorcycle community Attorney Russ Brown was well received, he understood the need for legal representation when a motorcyclist is injured and because he rode a motorcycle as well, his knowledge of the dynamics of motorcycle accidents helped him secure fair settlements for his clients. In the beginning of his law practice Attorney Russ Brown was the only attorney who specialized in motorcycle accident cases and this further helped to reinforce his acceptance within the motorcyclist community.
The rights of motorcyclists and how the general public perceived them have always been important to Russ Brown. When California instituted mandatory helmet laws, Attorney Russ Brown spoke on behalf of motorcyclists and their right to choose whether they wore one or not. The general opinion regarding helmet laws in the motorcycle community was considered a violation of their personal freedom and took away their right to choose. It seems that Russ had made some impact speaking out against mandatory helmet laws, because the media certainly heard what he had to say on the subject. He was invited on one of the local Los Angeles daytime talk shows and he shared his views on his beliefs on the State of California restricting the personal freedom of motorcyclists.
In retrospect Russ now believes after many years of motorcycle accident investigation and medical report that wearing a helmet actually helps protect motorcycle riders. Strangely enough Russ also discovered that courtroom juries seem to have less sympathy for the injured motorcyclist who wasn’t wearing a helmet.
Attorney Russ Brown understands first hand what a motorcyclist goes through when he is hit on his motorcycle. There is a lot to deal with; foremost the injuries and pain sustained from the accident make it hard enough, but there is talking with police investigators and your insurance company. It can be almost overwhelming.

In the 1980’s Russ Brown was on the road hundred of miles from home when his motorcycle broke down. Stranded and without any help he began to think of how helpful it would be if there was a network of local riders who could help a stranded biker. It took Russ a long time to get home, and it wasn’t long after that BAM (FREE Breakdown And Legal  Assistance for Motorcyclists) was born. The BAM program is a 100% free network of motorcyclists that can lend a helping hand if you are in an accident, breakdown or run out of gas on the road. With millions of active members BAM is the largest network of free assistance for bikers in need of help on the road and it’s Nationwide!
Attorney Russ Brown continues protecting the rights of motorcyclist’s nationwide through his law firm, representing bikers who have become victims involved in vehicle accidents ensuring they are treated fairly.