The Movies and The Motorcycle 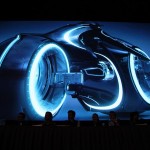 Anyone who doesn’t think that the motorcycle hasn’t become an ingrained and integral  part of American culture obviously hasn’t watched any major motion pictures in the last 60 or so years. Even though the motorcycle had already earned its place in American history serving duty within the ranks of the Military and police as far back as 1908, the Harley and Indian motorcycle had still not made sufficient impact upon the general public until Marlon Brando and Lee Marvin roared upon the big screen in 1953 with Columbia Pictures “The Wild One”. Described as “a gang of hot-riding hot-heads who ride into, terrorize, and take over a town…”, the motorcycle was well on its way to becoming a symbol of outlaw behavior that would remain for many, many years to come.
And while Hollywood filmmakers were still years away from portraying motorcyclists as agents of everything against the law, the motorcycle and the men who rode them were still held in high esteem by many with Steve McQueen staring in the 1963 MGM classic “The Great Escape”. Who could say an unkind word about a U.S. Soldier using a valuable Military tool, the motorcycle, to escape from a German POW camp during WWII?
Steve McQueen was until his death an avid motorcyclist and his 1971 movie “ On Any Sunday”, A documentary following the lives of motorcycle racers and racing enthusiasts showed a more human side of man and machine.
The motorcycle was almost seen on TV and the movies as a powerful weapon of good and evil depending on who was riding it, with the police and military representing the good guys, and the bad guys being any one who wore leather, had long hair, tattoos, smoked pot or any combination thereof.
While the TV and movie industries jobs are to bring art to life, their over exaggerated portrayals made it easy to stereotype both the good and the bad guys in a similar fashion of old western movies where the good guys always wore white. Certainly no one complained when biker gangs were spoofed as bumbling idiots as in the 1980 Clint Eastwood movie “Any Which Way You Can” with the Black Widows demonstrating their nonexistent outlaw biker skills, but 1969 was unkind to anyone with long hair and a Harley as seen in “Easy Rider” and again with “Hells Angels On Wheels”. Hollywood made it easy to categorize and hate anyone riding Pig Iron and sporting long hair.
Maybe it was a reflection of the times, or an echo of social unrest that was captured by Hollywood filmmakers, but whatever it was, it only made the motorcycle more popular, sought after, and loved by the world!
Hollywood made a lot of movies that featured motorcycles and the good guys and of course the bad guys, some of them good, but most not so much!
As the years rolled on and yuppies declared tattoos and Harleys cool, it was now ok to let your freak flag fly and get into the wind…we’ll it was for those who were worried about what their next door neighbors would say. It seems that popular opinion was that the Harley was now socially acceptable and you could even be a bad guy if you never rode a Harley in your life… It is a good thing that motorcycles were never involved in the Enron or the Bernie Madoff scandals or we would all be screwed!
The motorcycle has come a long way and that is a beautiful thing. It will be interesting to see what the future brings in regards to design. If it’s anything like the motorcycles they used in the latest Tron Legacy movie, it will be an incredible future indeed.
Nationwide motorcycle accident lawyers serving every city in the US, from coast to coast including Los Angeles, California, Dallas, Texas, Philadelphia, PA to New York, New York. We have you covered anywhere in the USA.