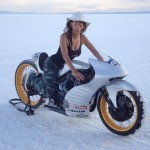 Los Angeles, California: Brenda Fox is a diamond of 56 facets, all of them reflecting her value, and it’s hard to say which facet should be respected the most. She’s conquered stunt cycle riding, radio show hosting, print journalism, fashion modeling, prize-winning equestrian competitions, and she’s been a pioneer for female riders and their acceptance. Brenda’s talent for riding anything, in any terrain, has vaulted over so many barriers and blazed so many trails that she’s changed the industry – just by being herself.
Brenda’s determination is also diamond-hard. She’s been fighting breast cancer and several other life-threatening conditions for several years, and she’s so loved that fans have risen to help with the challenges of her medical bills. Members of the “Brenda Fox Kick Breast Cancer Fund” even include North America’s premiere motorcycle injury attorney firm, Russ Brown Motorcycle Attorneys, all looking to return support, for someone who never asked for anything but a fair chance to make her mark in what had been an all-male sport.
Fox owns her battles for acceptance, how she kept paying her dues even though she was slammed again and again. She’s proud of her persistence, how she kept going after others would have quit.   Brenda maintains that being authentic and knowledgeable about her subject transcends gender, that it’s not about “male” or “female” when you “know your stuff;” even now, she’s modest about the walls she hit, coming up through the industry as a newcomer and a female.
She made it look so natural and effortless that it’s easy to overlook her victory in one of her hardest battles: in the years when women on wheels weren’t welcomed, Brenda managed to be feminine enough to be herself and tough enough to ride out the negativity thrown at her. She used her passion for horses to become an accomplished competitive rider, and then translated those athletic skills to cycles and stunt riding. A fashion model at 18, Brenda’s transition to the entertainment industry put her natural gifts on TV shows, billboards, book covers and national ads. She acknowledges an evolution, from a time when she wore baggy clothes to look less feminine and avoid criticism. But Brenda says as she continued to grow in her cycle experience and knowledge, she also grew in self-awareness. If how she looked was a problem, it became other people’s problem — not hers.
Comfort in her own skin, and her compassion, have brought her to several causes, including women’s empowerment and animal welfare. Brenda’s focus these days is for women to acknowledge and support each other’s courage and passions.
Her Face book page urges others to perseverance and hope: “You never know how strong you are, until being strong is the only choice you have.” You might get an inkling, though. Brenda’s conquered monster machines while looking gorgeous, but she’s also hosted charity events at the Playboy Mansion and Universal Studios, served as the Grand Marshal of the First Annual New England Walkers for Knockers Ride for the Cure, and ridden in Broc Glover’s Breathe Easy Ride against Cystic Fibrosis.
Now, the one who has done so much giving, is learning about accepting. Her medical struggles and her lack of insurance are teaching Brenda the other side of compassionate giving. Her family is her horses and Dobermans, which give her companionship and love — but not insurance. Russ Brown Motorcycle Attorneys® and BAM (Free Breakdown and Legal Assistance for Motorcyclists) have launched the “Brenda Fox Kick Breast Cancer Fund,” so fans and followers can help with Brenda’s medical bills. Whether you’ve ridden with her, know her from TV or radio, have benefitted from her caring and efforts in the past, or just admire all she’s done for women on two wheels, this leg of Brenda Fox‘s ride could use your participation.
For anyone wanting to send her a donation, you can send it to: Brenda Fox, PO Box 7653, Thousand Oaks, CA., 91359.
Or you can give online to the “Brenda Fox Kick Breast Cancer Fund” at www.wepay.com
Russ Brown Motorcycle Attorneys® is proud to be a sponsor of the Biker Belles Ride 2012 in Sturgis, South Dakota during the Sturgis Buffalo Chip Concert Series. The Biker Belles Ride does two great things. The ride celebrates incredible women in the industry and raises money for two great charities. Horsepower and the Sturgis Motorcycle Museum & Hall of Fame. Horsepower is a charity that helps girls who are at risk or are victims of abuse and the Sturgis Motorcycle Museum that is expanding and will enhance will exhibits that feature women motorcyclists and their role in changing motorcycling history. The Biker Belles event is put on by the Legendary Sturgis Buffalo Chip – the place to stay and be in August.

Where is Sturgis? South Dakota