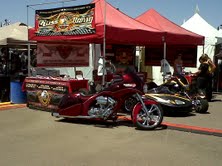 Even Low Speed California Motorcycle Accidents Can Be Tragic

A recent serious LA motorcycle accident involved a celebrity biker traveling at only 35 miles per hour. Canadian producer, Daniel Lanois, suffered severe injuries in a Los Angeles motorcycle accident in early June. According to CTV News in Canada, the motorcycle accident occurred when Lanois swerved to avoid hitting another driver who suddenly turned in front of him. As a result, his motorcycle hit a static box on the sidewalk. Lanois spent several weeks in the intensive-care unit of a Los Angeles hospital for his injuries, which included multiple broken bones and internal bleeding.

Earlier this week, a 26-year old man died in a low speed California motorcycle accident in Colton, California. According to the San Bernardino Sun, the CA motorcyclist was traveling at 15 miles per hour when he was ejected from his bike after he lost control and hit a metal wire on the side of the road.

Motorcycle accidents hitting the news wire for this past weekend:

Two people on a motorcycle were injured after a motorcycle accident involving a pickup truck in Ill. .Adams County Sheriff’s deputies said the motorcycle accident took place just west of County Road East 1500th at 11:50 p.m. A  motorcycle driven by Robert L. Lillywhite, 39, of St. Johns, Michigan., was in the wrong lane when it hit a pickup driven by Timothy M. McFadden, 45, of Versailles. Lillywhite and passenger Kelly Veihl, 45, of Quincy, were taken to the local hospital and McFadden was not injured. Lillywhite has been cited with a DWI.

A Vacaville, California,  resident is  in serious condition after he was involved in a motorcycle accident on Saturday. The accident occurred while the biker was traveling north on Peabody Road when his  motorcycle was struck by a Volvo driven by 79-year-old man.. The older man was trying to make a u-turn in front of the Harley Davidson in Vacaville, CA.

Alcohol may be a major factor in an Ohio motorcycle accident.  Just North of Fremont, Ohio, the driver of a motorcycle lost control of his motorcycle and both the driver and passenger were thrown from the bike.  The driver of the motorcycle was then hit by an oncoming truck and died at the scene. The Ohio highway patrol is investigating.

In Oklahoma City, Oklahoma, police need help in finding the driver of a truck that struck and killed a motorcyclist.

In Lubbock, Texas two people were critically injured when a motorcycle collided with another vehicle.  Lubbock, TX police are still investigating this motorcycle accident.

A motorcyclists wrecked his bike and is in serious injury after crashing his bike on the 101 in Phoenix, Arizona.  The biker lost control of his motorcycle and sustained injuries to his head and legs.

In Branch County, Michigan a man/motorcycle went up against a deer and lost.

A sad story from Clover, SC family found the body of their teenage son  – five days after police believe he died in a motorcycle crash.  The family retraced his regular travel routes and found his crashed motorcycle along Crowders Creek Road, just west of Gastonia, N.C. A North Carolina Trooper  said the teen was killed when his motorcycle crashed into the woods in Gaston County.