Dot Robinson – The Woman Who Turned Motorcycling Upside Down 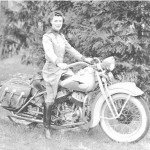 Dot Robinson. Good-looking, high-powered, fully made-up and literally born to ride. Dot Robinson’s mission was to unite female motorcycle riders and make it possible for women to race – and look great doing it!

Dot Robinson was a motorcyclist even before she was born. When her mother went into labor on April 22, 1912, Dot’s dad, James Goulding, loaded her into a sidecar and rushed her to the hospital. Dot’s father was a sidecar designer and an amateur racer, and Dot grew up around motorcycles in Saginaw, Michigan.

Dot met her future husband Earl while she was still in high school, and they married in 1931. They both rode in endurance runs and races. Dot earned her first trophy in 1930 at the Flint 100 Endurance race, and the couple made a record transcontinental run together in 1935. Shortly after that, Harley-Davidson asked the Robinsons if they wanted to run a dealership. The couple moved to Detroit and opened a dealership, and ran it for some 35 years. Dot racked up a shelf full of trophies, but she had to fight as well as compete for them: she won the Michigan State Championship and the Ohio State Championship, and then Dot wanted to compete in the National Endurance Run. The director tried to keep “women” from competing – even though Dot was the only woman trying to enter. She gathered thousands of signatures on a petition, but still he wouldn’t budge. So Dot loaded all the petitions into a big carton and turned the box upside down onto his desk, snowing him under. She laughed that they eventually became friends, and he told her, “Nobody ever raised that much hell all over the country.” She had meant to turn motorcycling upside down, and she literally did!

Dot Robinson’s mission was bigger than just opening racing to women: she wanted to do it beautifully. She made sure she was always camera-ready, in full make-up. Everyone who knew her, says as much about her elegant clothing and make-up and personal conduct as about her riding.  One racer tells of the time they rode through mud and trees for two days, and when the race was over the men tramped to a local bar. Dot cleaned up and walked into that bar in full make-up, a black sheath dress and a pillbox hat. Nobody ever saw Dot without makeup, and she set a new standard for women motorcyclists: she proved that you could be a lady and still ride a motorcycle.

Her talents were as much mental as they were physical. From 1955 through 1962, Dot and Earl competed in 24-hour marathons where participants could only stop for fuel and bathroom breaks; Dot’s strategy was to sleep the first eight hours and let everyone get tired. Then she would jump in for the last 16 hours, and win.

In 1940, Dot and a New England rider named Linda Dugeau started a women’s riding organization, and in 1941 they launched the Motor Maids. She found 51 ladies who became the charter members of the Motor Maids of America, now known as the Motor Maids, Inc. In the 1950’s, The Motor Maids convinced many women to try motorcycling, and Dot began wearing the pink riding outfits that became her trademark.

After the Robinsons sold their Harley-Davidson dealership in 1971, they traveled on their motorcycles. Dot’s favorite trip was a 6,000-mile excursion all over Australia. Earl died in 1996, but Dot kept riding until she was 85 — knee replacement surgery had made it too hard to get on and off her sidecar. At that point, “The First Lady of Motorcycling” had totaled one-and-a-half million miles in her years of riding.  Dorothy Robinson was 87 years old when she passed away on October 8, 1999, but the Motor Maids continue her proud legacy.

Please join fellow Motor Maids and others for the annual Sturgis Buffalo Chip® Biker Belles™ charity ride and event celebrating the history of women in motorcycling and sharing and encouraging women riders today. The celebration is on Wednesday, August 8th. For more information please visit www.bikerbelles.com.

Russ Brown Motorcycle Attorneys® are proud to be a sponsor of the Biker Belle’s Ride and the Sturgis Buffalo Chip.

Russ Brown Motorcycle Attorneys®, We Ride We Care We Win!