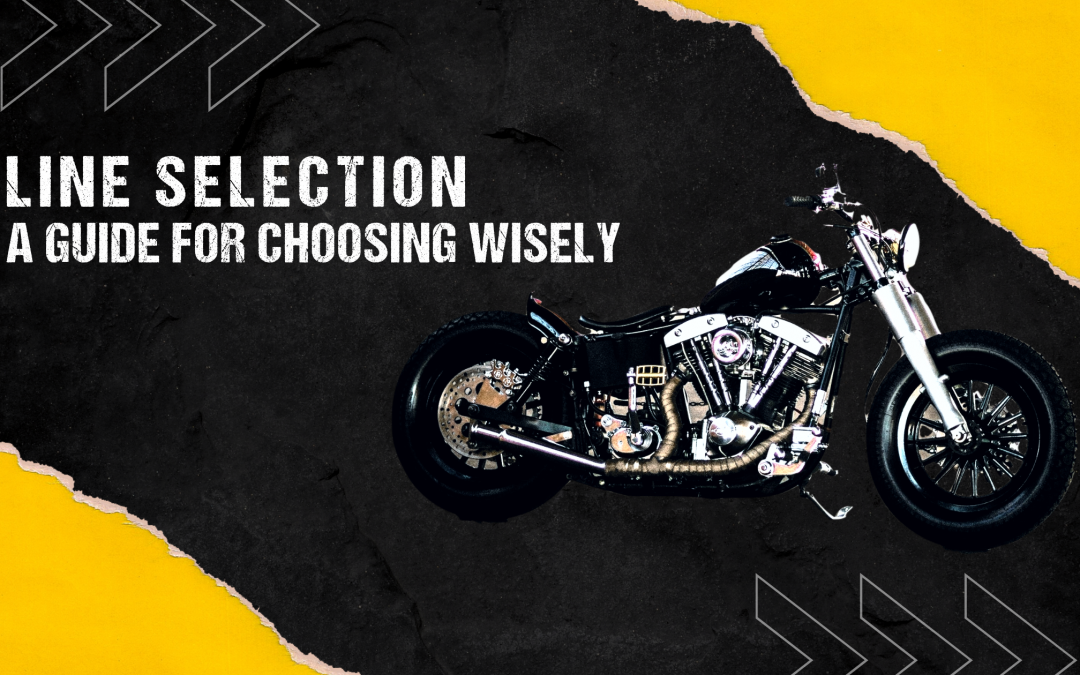 One of the biggest causes of rider crashes is going wide in a turn. A large part of that problem has to do with poor line selection.

In our Total Control Advanced Riding Clinics, we like to say that Arc = Speed. That means that the larger the arc, the faster you can go and still have traction available. A path of travel with no arc is a straight line, which is where you can ride the fastest. The tighter the arc, however, the slower you must go.

Motorcycles, as single-track vehicles, are significantly narrower than multiple-track vehicles like cars. As such we have the cool ability to vary our lane position. By precisely timing changes in our lane position, we can literally change the arc of the road and make it wider than it actually is. You see racers doing this all the time. If you look closely, you’ll notice they take an outside-inside-outside path of travel. If you compare that line to a line that stays in the middle of the lane, you’ll notice the racer line has a much larger arc. On the track, where conditions are controlled, this allows the racer to go faster through a given turn.

On the street, where conditions are not controlled, we’re going to use a similar path to the racer, but we’re going to do it at a slower speed. The reason for this is we need to leave some safety margin for the things on the street that I like to call “unexpecteds.” These are the things that can compromise safety. Some examples of “unexpecteds” we might face on the street include: Oncoming cars, Surface hazards, decreasing radius turns, and animals.

When it comes to achieving proper line selection with that outside-inside-outside line there are three common problems experienced by both street and track riders. They are premature initiation, slow steering, and fifty-pencing.

By far the most common problem with line selection is premature initiation, or starting your turn too early. Even experienced riders often make this mistake as it’s natural to want to get away from the nasty edge of the road to give yourself a buffer zone for safety. In Fig. 1 we have two paths of travel. The red path is the early turn point line and the green path is the delayed turn point line. Notice the tree in the middle of the turn which makes this a blind corner. 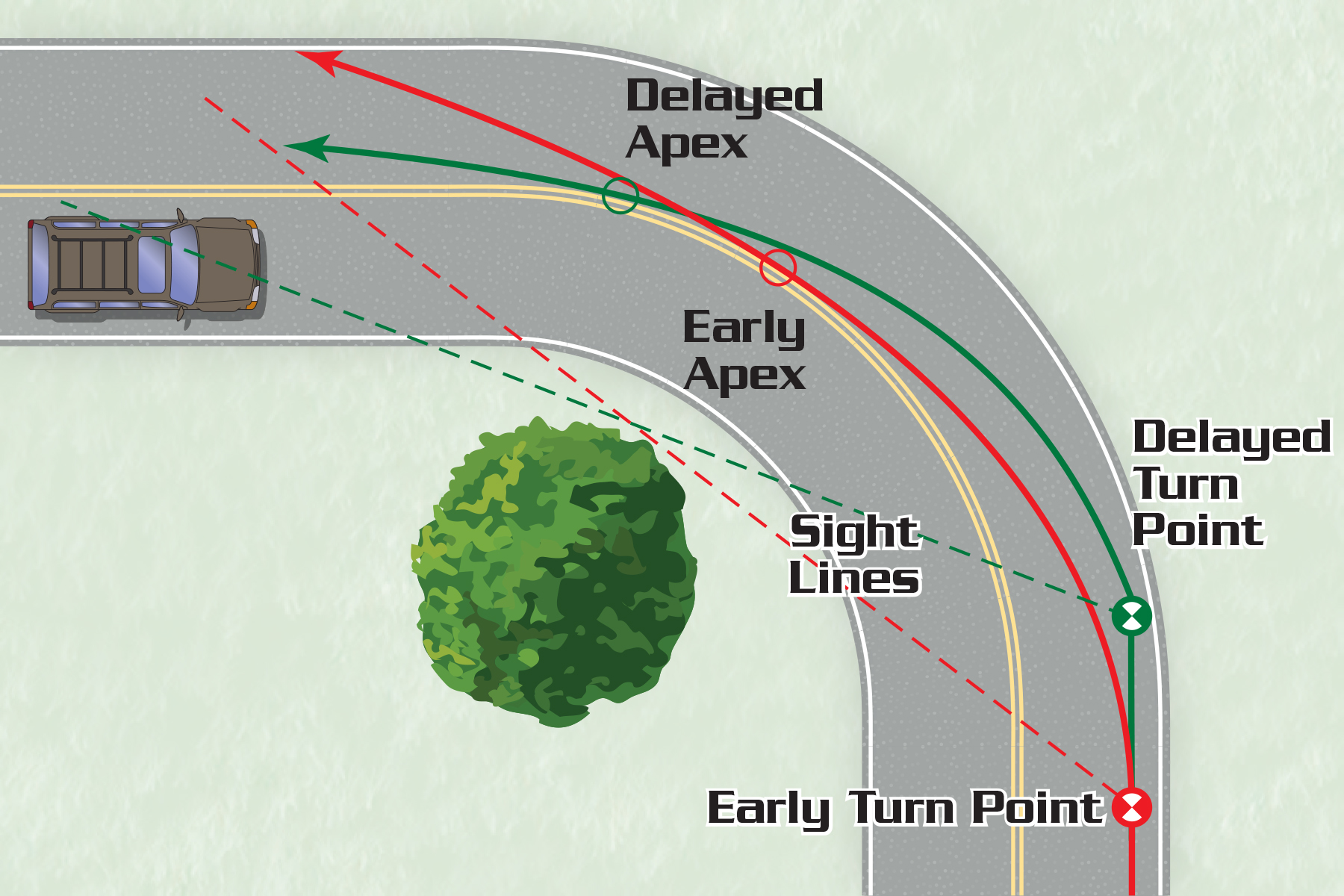 There are two reasons we don’t want to prematurely initiate our turns. The first reason is what it does to our site line. The site line represents what we can see as we look through a turn. Take a look at the sightline in the red path of travel.

The first drawback with an early entry into a turn is limited vision around it. In the case of a blind corner like this, the oncoming vehicle cannot be seen when the turn is being initiated. If the vehicle’s driver is: not paying attention, talking on a cell phone, going too fast, texting, putting on makeup, etc., the rider will not be aware of this potential threat until it is possibly too late. By delaying the entry, a clear view of the road is made before the rider commits to a path of travel. That way, a new plan can be made before the turn-in should dangerous circumstances present themselves.

The second drawback with an early entry is an early apex. Let’s start by defining what an apex is. An apex is the part of the turn when you are the closest to the inside. The earlier you enter the turn, the earlier the apex will be. Unfortunately, counter to what you might think, the earlier the apex is, the wider the exit line will be. This is because less steering must be used initially to keep from running off the inside of the turn, which means more time must be spent in a leaned-over state. The longer you are leaned over, the fewer options you have for changing the bike’s speed or direction. By delaying the turning point, more steering can be done initially, and the apex is also delayed, which keeps the bike from running off the outside of the road and provides more options on the exit should a problem be detected.

The second common problem with line selection is slow steering. Slow steering does not refer to how fast you are going through a corner, but rather that the time it takes to get from full-upright to full-lean is too long. By full lean, I don’t the maximum lean angle that the bike can achieve, but the amount of lean angle that the bike needs to negotiate the turn at the speed that it’s going. This causes too much time to be spent in what we call the “danger zone” of full lean and forces the rider to the outside of the turn. It’s called the danger zone because this is the time we as motorcyclists are the most vulnerable. For this reason, we always want to minimize both the amount of time we spend leaned over in the danger zone and the number of time we spend in the danger zone. 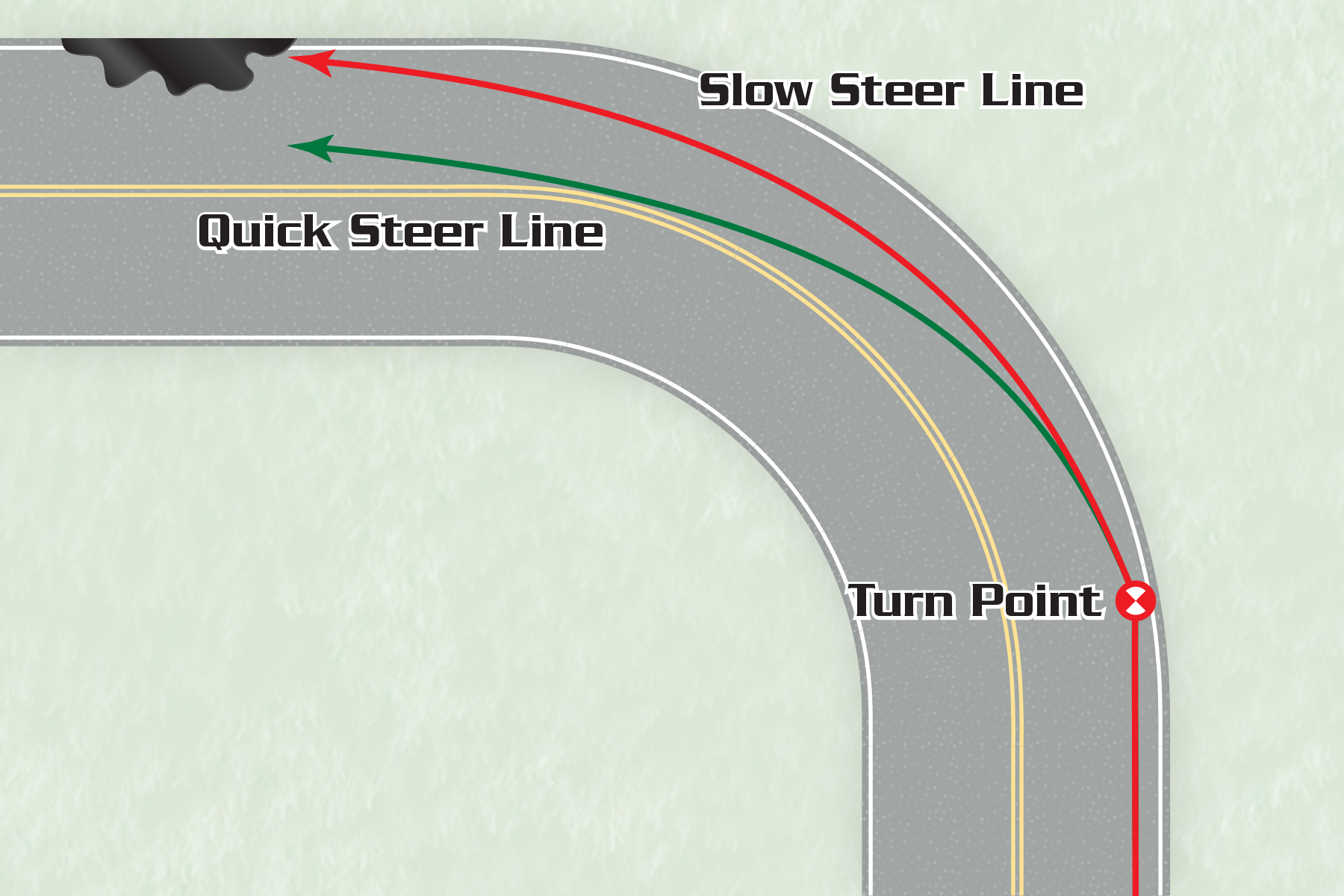 Notice in Fig. 2 that on the red early turn-point line, the rider slowly leans the bike into the turn. This may look very graceful as someone gradually enters the turn, but if there’s an oil slick or some other obstacle at the end of that line, things could get ugly. The rider is going to be stuck hitting it head-on, while still being leaned over. By contrast, the green quick-steer line has the rider quickly getting into and out of the lean, severely limiting his exposure to danger. If there was a problem at the end of that turn, because the rider is already upright again, he can still slow down, speed up, go left or go right. He has many options available to deal with any hazard.

The third common problem in line selection is fifty-pencing as seen in Fig. 3. This is actually an English term that was coined because the line created by connecting the multiple turn points resembles the jagged edges of an English fifty-pence piece. Fifty-pencing is primarily caused by not looking far enough ahead. If you’re looking just a little bit in front of you, you are not looking down the road where the real potential hazards may be hiding. Remember that motorcycling, just like any other sport, is a numbers game. If you increase your chances of making a mistake, in this particular example by about 400%, believe me, your number is going to come up a lot sooner rather than later. Additionally, every time a new steering correction is made this puts the rider once again into the Danger Zone and forces the rider to the outside of the turn. 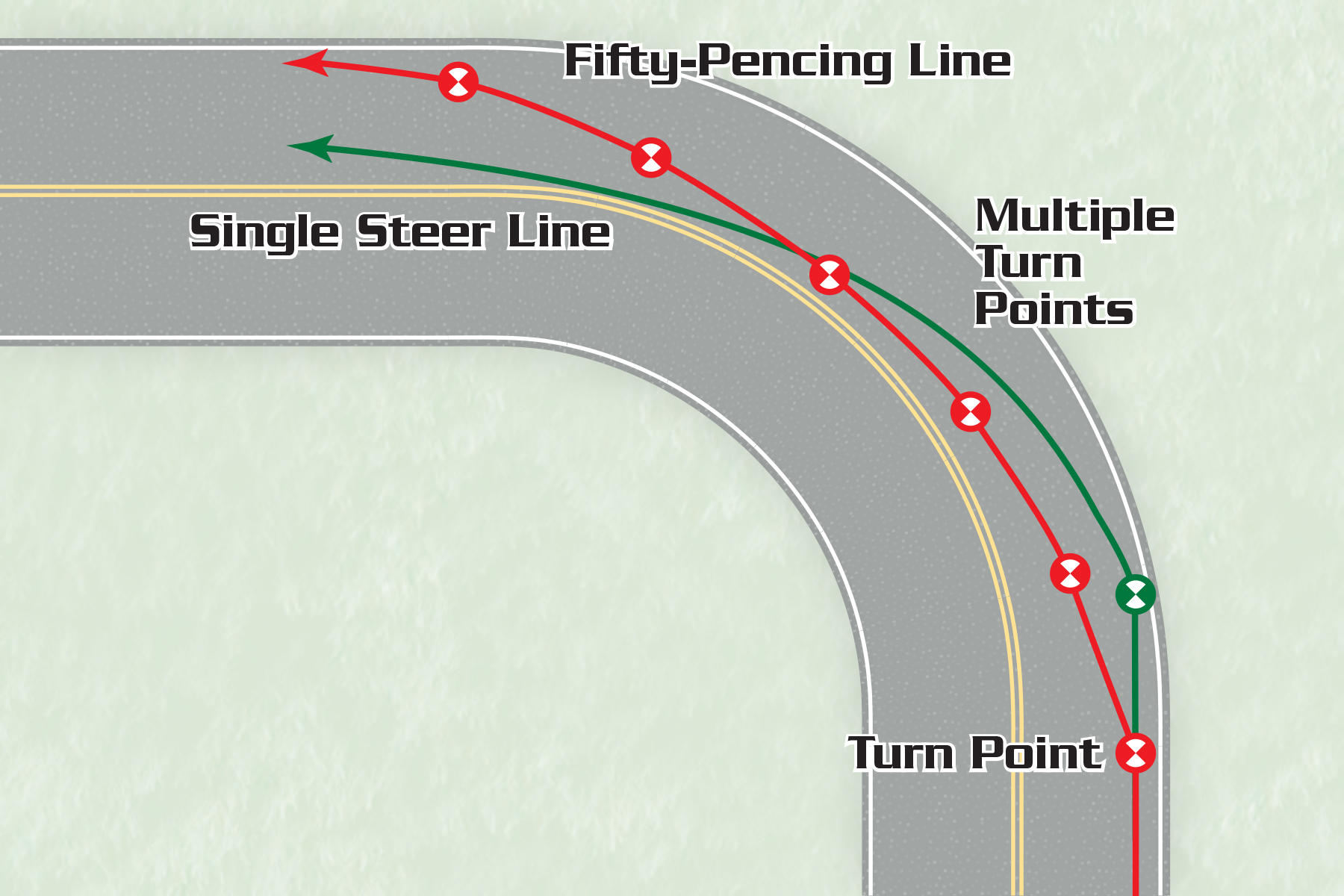 By understanding these common problems, and developing good habits for choosing lines, the process will eventually become automatic. That will allow much more of your attention available for enjoying the ride.